Can You Donate Plasma If You Smoke Weed?

It is common knowledge that blood donations can saves lives, but are you allowed to donate it if you use cannabis?

The quick answer is, YES.

Smoking cannabis does not disqualify you from giving blood.

However, the clinic will likely turn you away if you appear visibly high during your appointment. 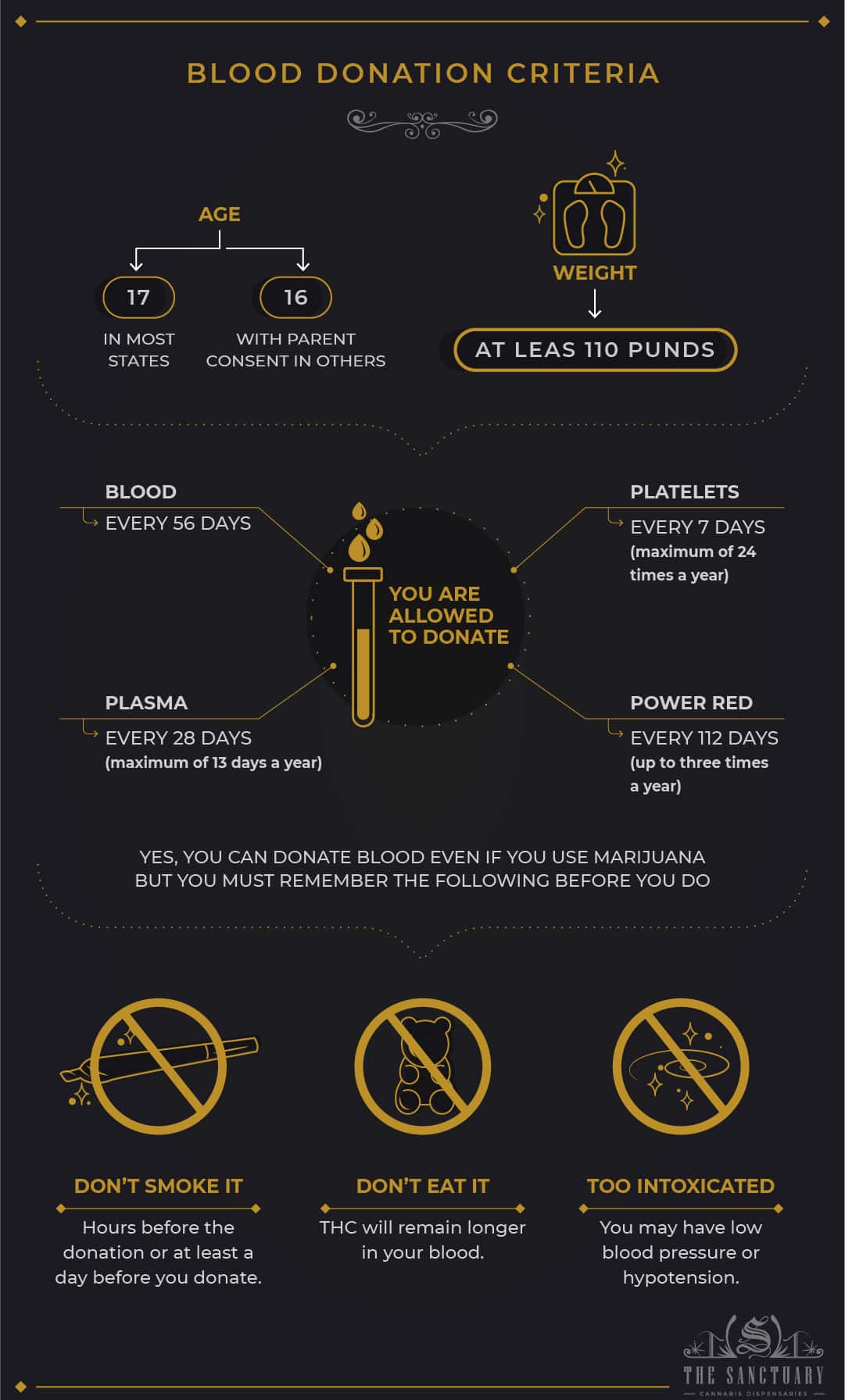 Every two seconds, a resident of the United States needs blood. An estimated 4.5 million Americans require a blood transfusion every year.

The body replenishes lost blood which improves cardiovascular health, reduces your risk of obesity and cancer. The same applies to donating blood plasma.

What is blood plasma?

Blood plasma is a yellowish liquid component of blood that holds the blood cells, proteins, and other elements of whole blood. When donated blood is left standing, it separates from the plasma after only a short while.

Plasma is critical in helping those who are sick. Blood plasma regulates the body’s electrolytes and prevents infections from occurring as well as the development of blood disorders. Donated plasma encourages the balance of a patient’s protein count. Those proteins can help identify different diseases and treat them.

Thusly, it is crucial for blood banks and hospitals to have a significant supply of plasma as well as regular blood donations.

What is a plasma donation?

During a plasma donation, the liquid portion of the donor’s blood is separated from the cells. Blood is drawn from a person’s arm and is sent through a high-tech machine that collects the plasma. The red blood cells and platelets of the donor are then returned through the arm along with some saline. This process is perfectly safe and takes just a few minutes longer than donating whole blood.

Within 24 hours of being donated the plasma is frozen to preserve its valuable clotting abilities. It can safely be preserved for up to one year and thawed for transfusion to a patient when necessary.

Medical experts can use plasma to treat different kinds of serious health problems.

Certain elements found in plasma, including the antibodies and chemicals that help your blood to clot, can help treat some ailments like burns and trauma.

Other things that plasma donation can help with include:

What are the guidelines for a blood/plasma donation?

Before you decide to donate blood and plasma, there are some considerations to be had. First and most importantly, only apply if you are generally in good health. In most states, the minimum age to donate is 17 years old. However, some states will allow 16-year-olds to donate assuming they have consent from a legal guardian. People donating must also weigh at least 110 pounds.

People are only allowed to donate as often as:

Some important precautions of weed use before donating plasma

You are allowed to donate blood even if you are a cannabis user except you must follow these preliminary mesures:

Should I donate plasma even though I smoke weed?

Legally, it is perfectly acceptable to become a regular plasma donor as long as you avoid cannabis products 24 hours before the donation. Critics of cannabis may suggest that the blood of a cannabis user is unsuitable for a baby, infant, or toddler. However, there is no evidence to back this theory up. It is important to understand that THC (the psychoactive compound in cannabis) will no longer be in the plasma or blood by the time the blood is transferred to another person.

While THC does take longer to break down and exit the system of a regular user, it is not possible for a donor-recipient to feel any effects from weed-infused blood. Therefore, the amount of THC in your system is irrelevant.

Forms of cannabis not allowed

You can donate plasma if you have consumed cannabis. However, you cannot donate if you have smoked or ingested a synthetic form of weed.

Another common synthetic marijuana product is an FDA-approved medication called Marinol. If you are taking Marinol for a medical condition, such as nausea from chemotherapy or loss of appetite from HIV infection, you are not eligible to donate plasma.