Can You Legally Mail Weed?

With cannabis legalization taking the United States by storm, the methods of purchasing weed are changing quickly. You can now purchase weed online, which is something many people never thought they would see. However, buying bud online is not like ordering clothes because you do not have the option to get weed mailed to your front door.

With weed becoming legal, many people are asking:

“Can you order weed through the mail?”

Well, the blunt answer is, NO.

Despite the presence of states with regulated weed, it is absolutely illegal everywhere in the United States to send or receive weed through the mail. The USPS falls under federal jurisdiction, so they adhere to federal rather than state laws.

In recent years, third-party carriers like FedEx and UPS have been indicted for conspiracy to distribute controlled substances, and while these cases did not involve cannabis, it gave them the incentive to monitor and prevent the shipping of all drugs. 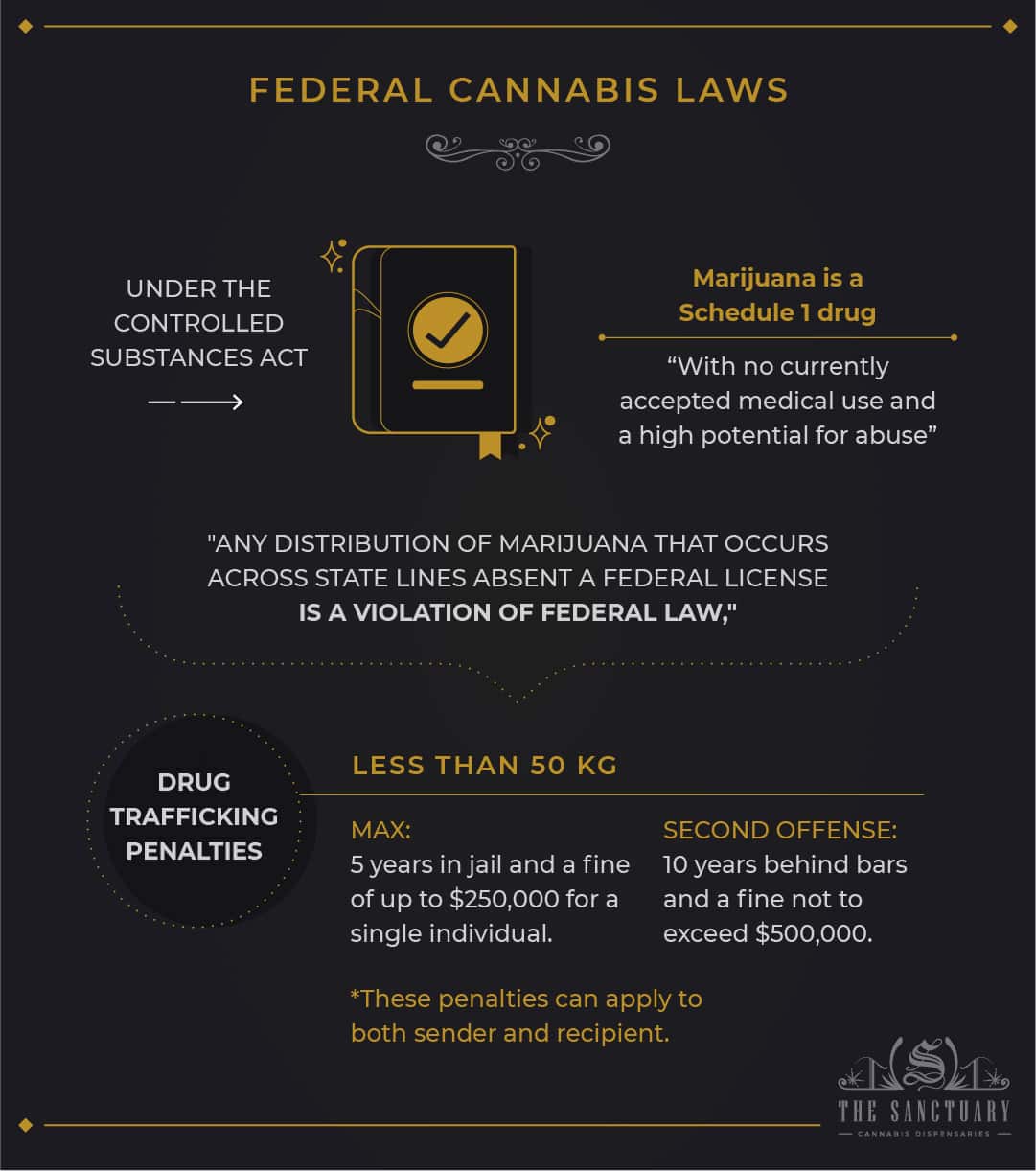 In 1970, President Nixon signed into law a Controlled Substances Act, which aimed to regulate the possession, use, and manufacturing of certain drugs including cannabis which is listed as a Schedule 1 drug. The Drug Enforcement Agency identifies Schedule 1 drugs as those “with no currently accepted medical use and a high potential for abuse,” such as LSD, ecstasy, and heroin.

Paul Armentano who is deputy director of NORML stated, “Any distribution of cannabis that occurs across state lines absent a federal license is a violation of federal law.” The exact penalties will vary based on the specific drug and the quantity of it.

Getting caught with the possession of 50 kilograms of cannabis or less can result in up to five years in jail and a fine of up to $250,000. This is even for first-time offenders. Second offenses may lead to double the penalty; 10 years in jail and a maximum fine of $500,000.

The penalties apply to both the seller and the buyer. The states that have legalized weed also include provisions that prohibit moving cannabis across state lines. This is to keep people in legal states from sending weed to states where it remains illegal.

Naturally, this rule hardly deters people from sending weed across state lines. Cannabis is often sent through the mail all over the country. In the year 2015, the United States Postal Service reportedly had confiscated 34,000 pounds of cannabis.

Of course, this does not even take into account the amount they were not able to confiscate. We can only theorize how much weed they missed.

In a U.S. News report from 2015-2016, packages that were discovered to contain weed products increased by more than 18 percent. In contrast, mail that contained other illicit drugs increased 11.6 percent during the same time period.

The US Postal Service set forth new guidelines that suggest the federal agency will now deliver and ship hemp products. Hemp, will not get you high like THC cannabis but this is some progress nonetheless.

The 2014 and 2018 Farm Bills, federally legalized hemp products and cultivation all through the United States. These hemp products must have a THC content of less than 0.3 percent in order to be considered legal.

Unfortunately, the United States federal government makes mailing hemp products rather difficult. People sending hemp products through the mail must fill out legal forms confirming the products that are being shipped are in fact, hemp. If you are found to have made a false certification statement then you may be subject to federal perjury laws. Also, hemp products may only be mailed by a licensed industrial hemp producer.