How to Rehydrate your Weed

To maintain the potency and safety of smoking your favorite strain of weed, and with all other natural things in your home, you need to keep it fresh. While refrigeration is not required, weed just needs to be stored in the right conditions (temperature and humidity) and away from direct sunlight to be able to last for months on end.

Sadly, those conditions might not be ideal or something was not handled properly and the weed dries out. It might not be molding and might not smell bad, just not as aromatic, which for the frugal and passionate consumers brings the question: Can weed be rehydrated? Yes, it can.

Even better is that rehydrating your weed is easier than you might think because 90% of the process does not require anything from you: Simple changes to its storage when you find your weed is dehydrated will do the job to where all you have to do afterwards is wait.

This might be a turn off if you have had your stash for a few months, but weed does go bad and unfortunately, weed can grow mold. It is usually characterized as a white or light grey fuzz resembling spider webs growing on your buds. But before you panic, note that this can only happen if your weed was not properly stored.

Unless you leave the flower out to rot in the sun without a container or any sort of climate control and protection from bacteria, you will have nothing to worry about: You see how extremely poor those conditions have to be, right? It is likely that you do not leave anything else in your house lying around like this, so weed would be no exception.

How Does Weed Dehydrate?

As you may have guessed, weed can also dehydrate and start to go bad if left unsealed to dry. What happens when the flower is overdried is loss of terpenes resulting in loss of potency and effectiveness, giving you a brittle and undesirable product from what you originally bought.

It is also very important to know that curing weed is not dehydrating: Curing is a meticulously careful process of slowly drawing out the moisture to eliminate bacteria and increase flavor. Dehydrating is leaving it out to dry without keeping it fresh and causing it to spoil.

Can you Freeze Weed?

Technically, you can freeze concentrates so long as you are extremely careful storing them, but the same cannot, or at least should not, be said for regular weed.

Weed does not work well in the freezer for two reasons: Trichomes can become frozen and brittle in the freezer to the point where they fall off, and freezing creates frost which is just added moisture all over your weed. Too much moisture is the enemy to pretty much anything, but especially to weed, whether it is whole or grinded.

Obviously, moisture is good for weed since it needs to be hydrated, but have you ever tried to smoke a wet nug? It is disgusting, first of all, second of all, it will not break apart properly, and become deluded from being waterlogged, growing mold at the absolute worst. Weed, in its best storage conditions, will usually have a 12-month shelf life at room temperature anyway, so you have plenty of time to use it all without putting it in the freezer.

How to Rehydrate Weed 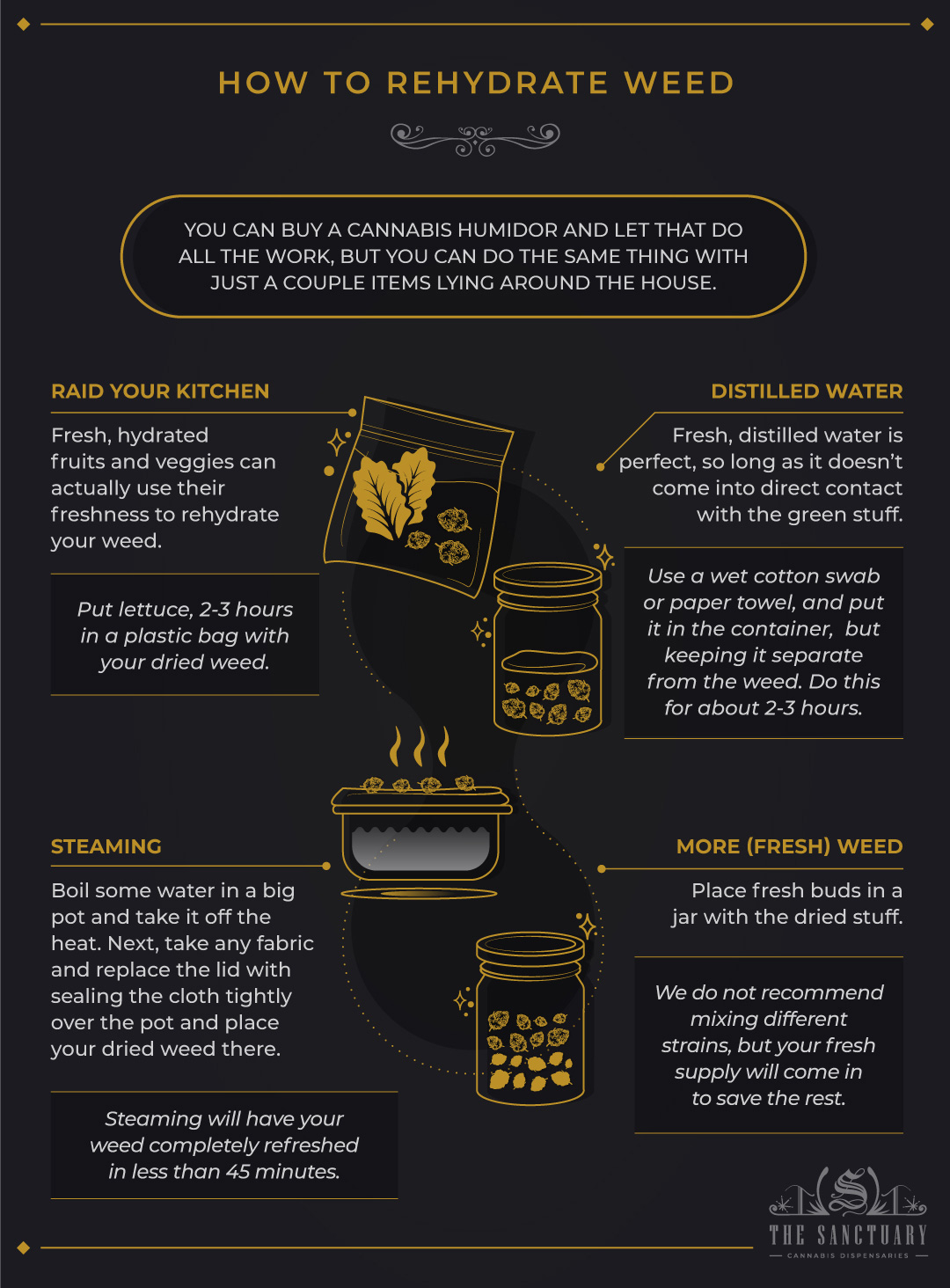 Weed is an extremely versatile substance, so it is no surprise that rehydration is the same way. You always have the option to buy a cannabis humidor and let that do all the work, but you can do the same thing on a budget with just a couple items lying around the house.

Probably the easiest way to rehydrate your weed is to raid the kitchen and refrigerator for some fresh produce.

No, not for the munchies.

But fresh, hydrated fruits and veggies can actually use their freshness to rehydrate your weed. Lettuce, for example, is almost entirely water, so 2-3 hours in a plastic bag with your dried weed will have it rehydrated and healthy once again.

Even better, you can simply take an orange peel or two, and leave them in a jar with your bud to enjoy it the very next day: 24 hours later if you aerate the jar only once a day.

If you are running low on produce, just add water (literally). Fresh, distilled water is perfect for rehydrating weed, so long as it does not come into direct contact with the green stuff. Take something like a wet cotton swab or paper towel (or cut up a damp sponge), and put it in the container while still keeping it separate from the weed.

Check back on your makeshift science project in about 2-3 hours, and your weed is saved.

Who would have thought that you could save weed with more weed? But it is true, it works the same as the orange peel or produce method: Placing fresh buds in a jar with the dried stuff. We do not recommend mixing different strains, but your fresh supply will come in to save the rest.

Finally, you can utilize the age-old budget cleaning solution for any surface: Hot water. What you want to do is boil some water in a big pot and take it off the heat.

Next, take a kitchen towel, cheese cloth or any fabric (make sure you go fabric and not paper), and replace the lid with sealing the cloth tightly over the pot. Leave your dried weed on top of the fabric and let the hot steam do the work. The best part is that steaming will have your weed completely refreshed in less than 45 minutes.

You know your weed is too far gone when the flower begins to mold, but this would only happen in extremely poor conditions for weeks or months on end.

That is the telltale sign that your weed is spoiled, but dehydrated weed can have a brittle consistency, little to no smell or taste, and an unpleasantly dry mouth feel if you try to smoke it.

How often can I Rehydrate?

You do not know what kind of bacteria could have been attracted as it dried, if any, but you could also lose anything from potency, quality, or freshness when your weed is repeatedly overly dried, so you do not want to keep repeating this.

Keep your weed hydrated, rehydrate once if it dries, then keep it that way until it is finished.