How to Tell the Difference Between Indica and Sativa

The words indica and sativa were coined almost immediately to distinguish cannabis plants based on the form and size of their primary leaves, as well as the quantity of fiber they generated. Today’s growers employ them for a similar reason.

Growers classify plants as indica, sativa, or hybrid depending on their growth characteristics and chemical profiles. Retailers can then use these keywords to categorize strains and promote them to customers.

Both indica and sativa are commonly used and fiercely debated words. Whether you are new to cannabis or a seasoned user, you have probably heard about an indica’s claimed “body high,” a sativa’s “brain rush,” or the many effects of a hybrid.

Is there really a difference between indica and sativa?

The cannabis plant was once categorized as sativa, indica, or ruderalis. Experts, like Dr. Ethan Russo, have questioned the use of this cannabis taxonomy for modern consumers, recommending that it be abandoned.

Few contemporary cannabis plants are entirely indica or purely sativa due to human interference. Russo contends that identifying biological component content, such as cannabinoids and terpenes, is more useful.

Differentiating indica from sativa, on the other hand, is still highly beneficial for cannabis growers. The most popular method of classifying cannabis varieties is by morphology or phenotype. The most well-known varieties, indica and sativa, have unique morphological characteristics and growth characteristics.

Understanding their growth cycles and how to care for each plant type will help you get the best possible results in terms of growth and bud production.

Hybrid strains are also prevalent, with many gardeners preferring plants that combine the best qualities of both sativa and indica varieties. Hybrids may either be sativa or indica dominant. 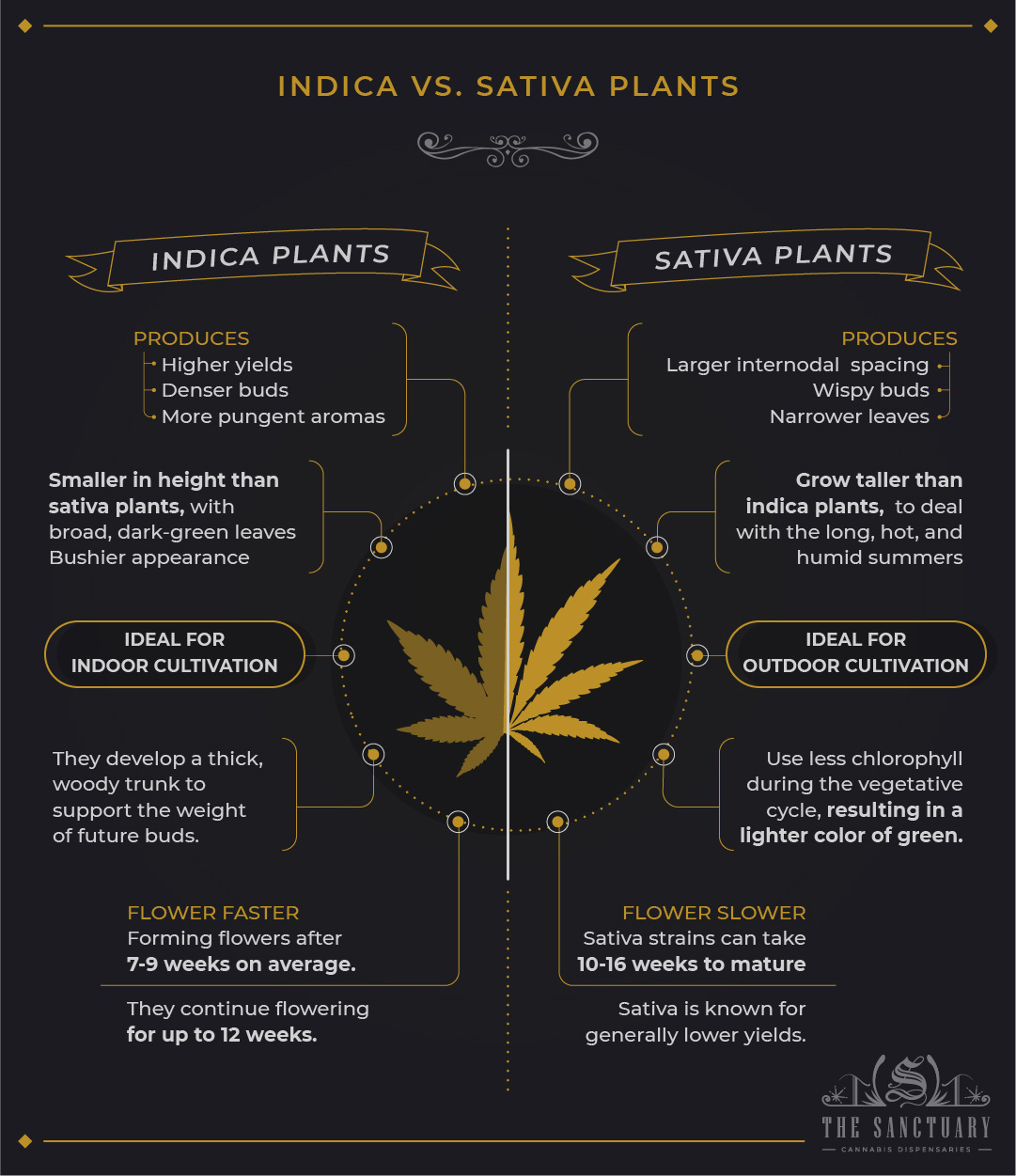 For novice growers, distinguishing between indica and sativa plants may sound challenging. However, they are very straightforward to distinguish if you know what to look for.

The cannabis indica plant is recognized for generating greater yields, thicker buds, and more pungent smells than the cannabis sativa plant. It evolved to adapt to severe temperatures and first-time weather circumstances by growing quicker, blooming earlier, and generating thick coatings of protective resin. It originated in the Himalayan areas of Afghanistan, Pakistan, and India.

Cannabis indica cultivars are shorter than sativa varieties, having broader, darker-green leaves and a bushier look. Their small size makes them suitable for growing inside. To sustain the weight of future buds, they grow a strong, woody trunk. Because of their large yields and quick flowering times, indica plants are popular among indoor growers.

Indica cultivars flower faster than sativa strains, with flowers appearing after 7-9 weeks on average. They can blossom for up to 12 weeks after that. The biological urge to reproduce and disseminate their DNA before the onset of severe winter circumstances causes the fast blooming phase.

These cultivars also have a distinct aroma, indicating a unique terpene composition.

Cannabis sativa is a tropical plant that may be found naturally growing in Thailand, Vietnam, Colombia, Mexico, and even portions of Africa. Sativa plants responded to the long, hot, and humid summers by growing taller, with wider internodal spacing, wispy buds, and smaller leaves. This naturally protects the plants from dangers such as mold and bugs.

The vegetative stage of the sativa plant begins slowly, with the stem lengthening more quickly later in the cycle. The sativa plant’s stem is fibrous rather than woody. Sativa plants are usually better suited for outdoor growth because of their higher stature.

Sativa strains have sparse foliage and light-green, thin-fingered, delicate leaves that may grow up to 10 feet tall. During the vegetative stage, sativa consumes less chlorophyll than indica, resulting in a lighter green hue.

Sativa strains might take 10-16 weeks to develop, depending on their genetics. Because there is no environmental incentive to reproduce quickly and disperse seeds, they have a protracted flowering period. The longer flowering period is somewhat compensated by a shorter vegetative phase during which no flowers appear. Sativa plants produce lesser yields than indicas.

Do indicas smell different than sativas?

Some cannabis users say that sativas and indicas have different aromas. Terpenes are the compounds that give cannabis its distinctive and diverse smells, and research suggests that indicas and sativas may have different terpene profiles.

The chemical profiles of 99 distinct cannabis strains were studied by Fundacion Canna, for example. Myrcene was shown to be the most prevalent terpene in virtually all strains, however, the study also revealed that the terpene profiles of indica and sativa types differed significantly.

The indica-dominant cultivars in the study showed greater relative amounts of camphene, myrcene, and limonene, according to the researchers. Sabinene, carene, alpha-Phellandrene, cineole, and terpinolene were found in greater relative quantities in sativa types.
More information on these specific terpenes, as well as how they can impact the scent of different cannabis strains, can be found below.

Because of the varying amounts of these terpenes, indica and sativa strains may have very distinct smells. Make it a habit to sniff your cannabis and attempt to distinguish between different strains’ fragrant characteristics.