How to Use a Bubbler?

There are so many different tools designed to get people high. Any conceivable device at this point has been invented for different and exciting ways to get high. Handheld pipes, bongs, vaporizers, steamrollers, chillums, one-hitters, and even gas masks are among the many distinct smoking devices available on the market.

Another useful device is the bubbler. A bubbler is a convenient cross between a bong and a glass pipe. It has water in it to cool down your hits but it is small enough to fit in one hand. A bong can tend to be expensive whereas a bubbler is usually much cheaper.

Anatomy of a bubbler 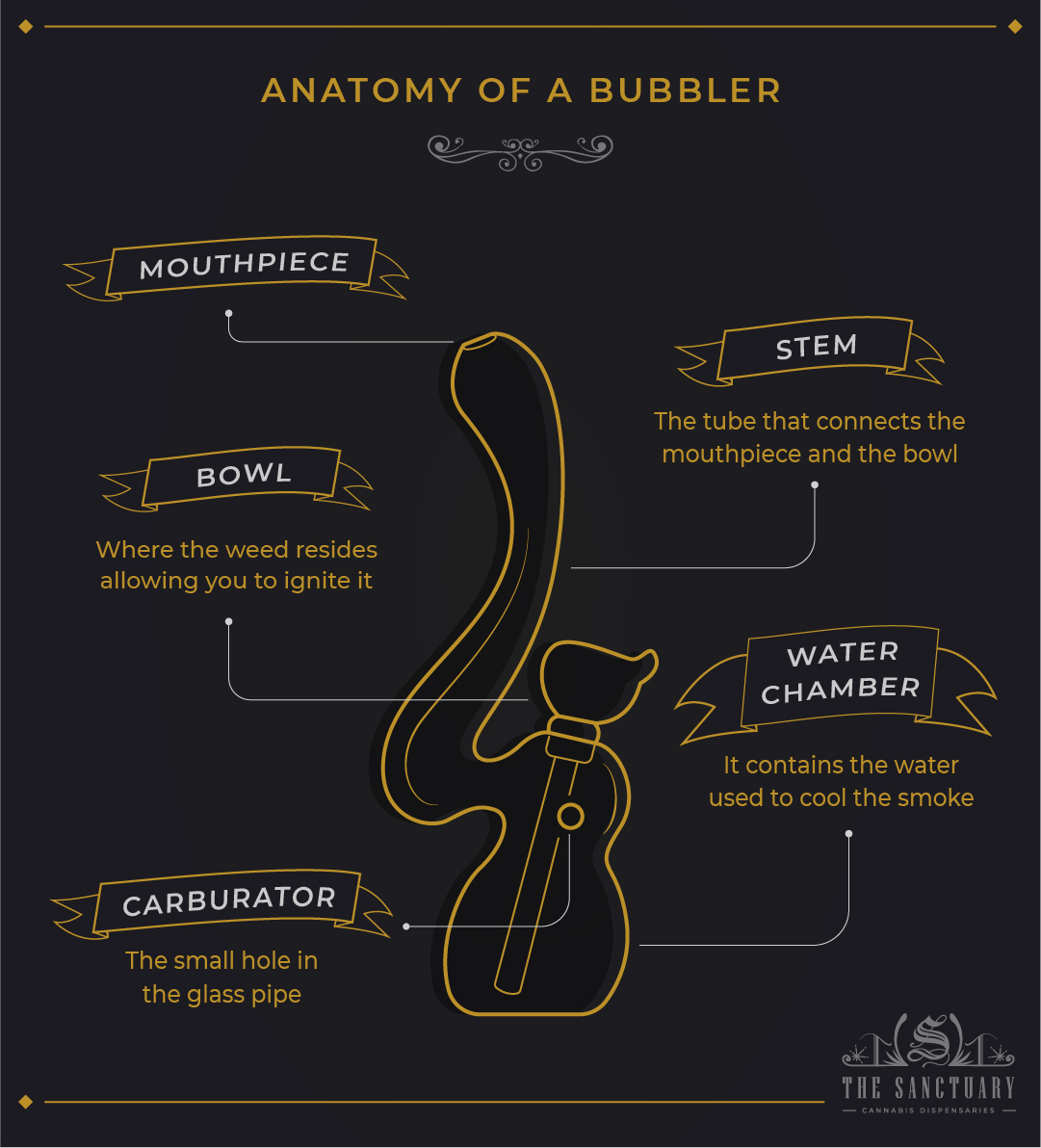 A bubbler is fairly compact. They are designed as either one piece or two different pieces; the second piece is a detachable bowl. On the top of a bubbler is the mouthpiece where you inhale the smoke. The mouthpiece is connected to the stem that goes all the way down into the water chamber.

The bowl is connected to the top of the water chamber for single-piece bubblers. Some bubblers have removable bowls which is a convenient feature for the purposes of cleaning out and packing a new weed bowl. Certain bubblers may even include a carb hole on the side of the water chamber where airflow is controlled.

The water chamber is one of the benefits of a bubbler because the water helps to cool down the hot smoke. When the bowl is lit, the smoke is pulled through the downstem into the water and then up through the stem and out the mouthpiece and into your lungs.

How does a bubbler differ from a bong?

While a bubbler and a bong share some principle similarities, they are still distinct in their own way. For starters, the major difference between them is their size. Bongs are bigger than bubblers. This especially includes the water chamber. For bongs, the water chamber can fit usually around a cup (8 fluid ounces) of water minimum. Bubblers, on the other hand, cannot hold nearly as much water and usually max out at about 2 fluid ounces of water.

Another difference between these two devices is that bubblers usually have fixed downstems, which means they cannot be removed. Bongs are designed to have interchangeable parts including the downstem.

When shopping for bongs or bubblers you will notice a major price difference. Bubblers are meant to be a cheap option with the added perk of water filtration. Bongs are much more expensive because they are designed with a stronger glass and more elaborate pieces like percolated downstems, ice catchers, etc.

How to use a bubbler?

Bubblers are easy to use especially if you already have experience smoking from water pipes. Here are the general steps to using a bubbler:

What to look for in buying a bubbler?

Bubblers can be made with different materials but are usually glass. When looking for a bubbler you have to decide how much money you want to spend. If you want to go cheap then any style should suffice. If you want to splurge and buy a pricier bubbler then look for one that is made of Borosilicate glass.

This type of glass is German-engineered, heavy-duty stuff that can tolerate very high heat and therefore should last longer than cheap glass. Borosilicate glass is sturdy but it can still break.

If you are shopping for a bubbler with a built-in bowl consider how big of a bowl you want. Maybe you mostly smoke alone and so you do not need to pack a lot of weed. Or maybe you smoke in circles with your friends so you may want a larger bowl size.

You can also find bubblers that are made of wood. While this may intrigue you, consider that if you smoke through a wooden pipe then the hits you get will take on a taste from the wood. These pipes are also more susceptible to mold if they are not dried out between each use.

If you want to try to find a bubbler not made of glass, consider getting a silicone one. These are good quality bubblers because they will not break easily and they will not develop the mold build-up that wooden bubblers can get.