What Happens if You Eat Raw Weed?

If you enjoy eating edibles then perhaps you have considered if it is possible to eat raw weed all by itself.

It is a concept that has been debated at great length. Technically, yes you can get high from eating raw weed.

However, it is a really inefficient way to get high. You would have to eat about an eighth of top-shelf bud just to feel any sort of effects. Eating that many raw nugs is certainly not going to be appetizing.

Can eating raw cannabis get you high?

When cannabis is harvested and cured, the THCA slowly converts into THC. This is why curing is such an important process among other reasons. Activating THC is a process known as decarboxylation. 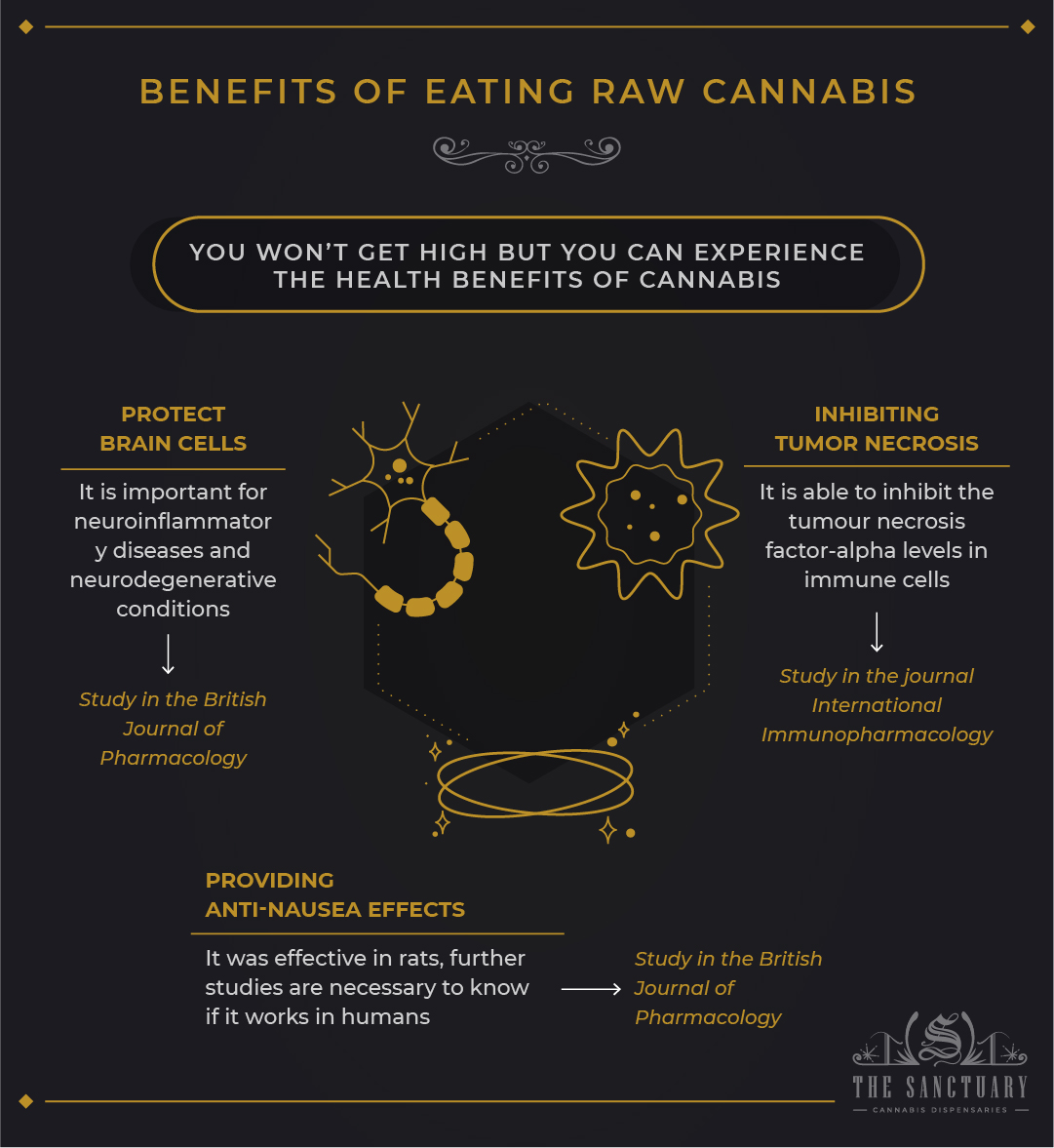 It is not just heresay, studies are coming out that demonstrate potential benefits from eating THCA. In 2013, researchers determined that cannabinoids such as THCA can slow the growth and spread of certain cancer cells. Another study in 2012 found that both THC and THCA can act as neuroprotectants that promote brain health.

Raw cannabis is full of beneficial terpenes, vitamins, minerals, and antioxidants such as omega-3 and omega-6 fatty acids. It has also been found to be high in protein, amino acids, and fiber. Specific benefits include:

If you have heard of the “entourage effect” then you understand the importance of terpenes. Terpenes are an abundant compound in cannabis. They provide medical and therapeutic benefits and are capable of enhancing the effects of cannabinoids.

For example, terpenes such as limonene and myrcene are responsible for encouraging feelings of relaxation and calmness.

Unfortunately, terpenes are volatile and therefore break down at high temperatures. Eating raw cannabis allows you to consume the rich array of terpenes in cannabis without any degradation.

Flavonoids are also beneficial compounds that should not be overlooked. Flavonoids are a group of plant metabolites thought to provide health benefits through cell signaling pathways and antioxidant effects. These phytochemicals can also be found in certain healthy foods and beverages like kale, broccoli, blueberries, green tea, and much more.

Flavonoids are crucial to the benefits of cannabis. They are essential pigments for producing the colors needed to attract pollinating insects, and also to protect plants from UV rays and pathogens. Examples of flavonoids commonly found in weed include:

There are a few ways to ingest raw weed. Some are easier to stomach than others. It is best to try each method to find your preference.

Juicing is the most common way for people to consume raw cannabis. It is the best way to get all of the vitamins and minerals contained in cannabis while filtering out the fibrous plant matter that is tough for our bodies to digest.

Weed juice does not taste very good on its own so consider adding some fruit juice to make it more palatable.

If you plan on juicing raw weed then you will need a juicer. All parts of the cannabis plant are able to be juiced but in general, the leaves and buds are the easiest to work with. If juicing the buds feels blasphemous then just stick with the leaves and you should still get plenty of nutrients. The water content of a weed plant is not very high so you will not get much juice from a plant.

Make a smoothie with different fruits and ice plus some raw flower and weed leaves. This will be much more fibrous than the juice but it still harbors all the same benefits.

Try chopping your plant material before adding it to the blender in order to help the process of breaking it down.

Some people eat weed straight up as if it were lettuce. While this is by far the least appetizing way to consume weed, it is possible. Try chopping it up as finely as possible and adding it to a salad with different greens and vegetables.

Eating raw weed may be unappetizing but it can also expose you to potentially harmful bacteria such as salmonella and E. coli. It certainly would not be the first time weed has been found to have trace amounts of these different bacterias.

Also, some growers may use dangerous pesticides for their plants and that is something you do not want to eat. If you are interested in eating raw weed then get some plant material from a trusted source with organic farming practices.