What Happens if You Fail a Drug Test?

A new Marist poll found that:

In the United States of America:

Despite the increase in cannabis regulation, 57 percent of employers in the United States still conduct drug tests that include THC on every job candidate.

Because cannabis is still federally illegal, companies even in legal states like Colorado are still allowed to disregard candidates and fire current employees if they are found to have THC in their system. 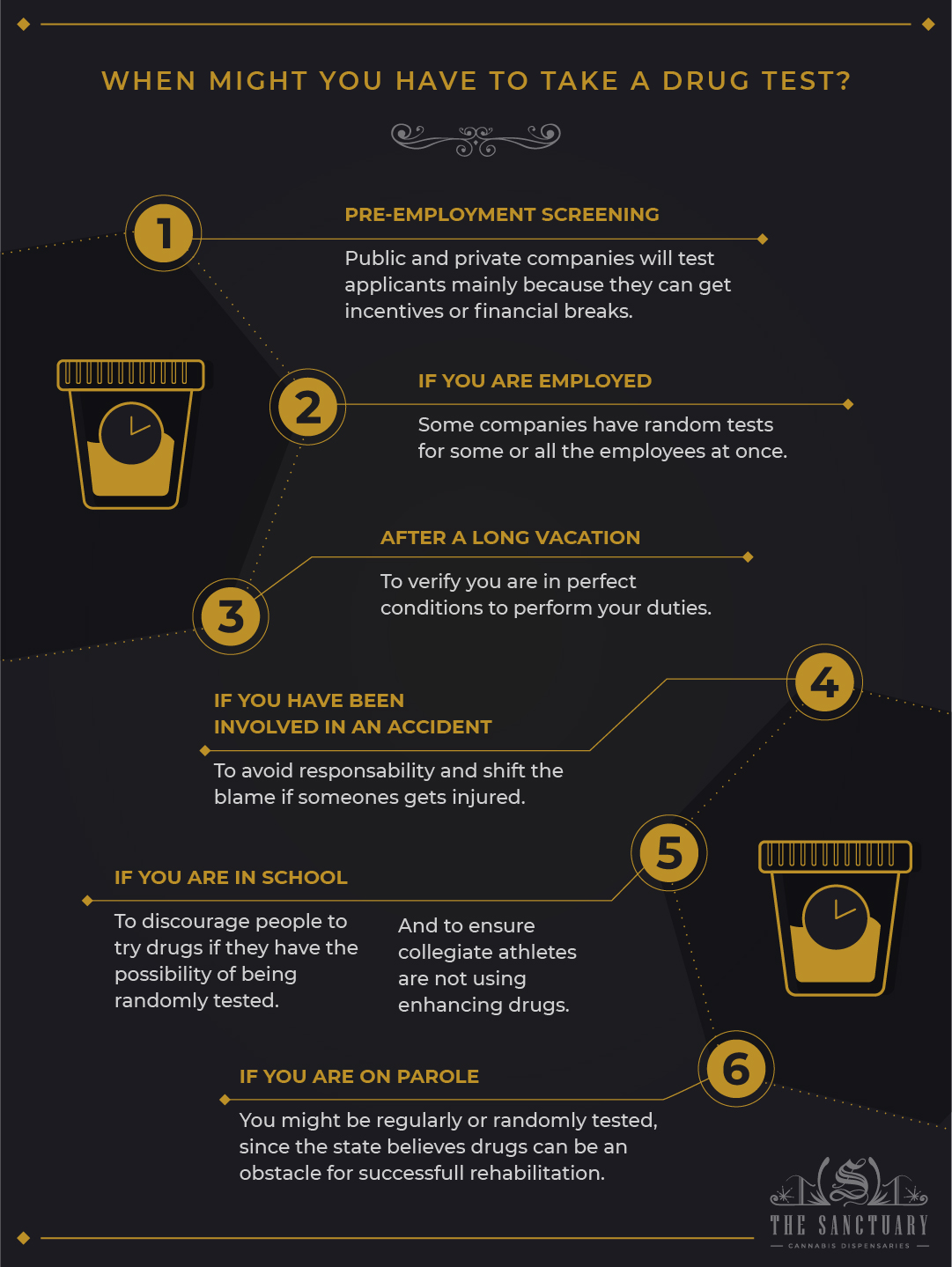 When might you have to take a drug test?

Most commonly people come across drug tests for employment reasons. You should assume you will be tested if you are applying for a government job, but even private employers may enforce pre-employment drug screenings.

Most companies are allowed to determine their own rules in regards to drug testing, however, it is common-place to follow the guidelines recommended by the Substance Abuse and Mental Health Services Administration. Companies may receive incentives from insurance companies to drug test their employees. Some jobs are required to drug tests for, such as firefighters or air pilots, for reasons concerning public safety.

Drug tests are not limited to just pre-employment. Employers may have random drug tests for employees to assure they stay clean or in case of a workplace accident. If a company believes an accident was related to drug intoxication then they will certainly test that person for liability reasons.

Professional and collegiate sports drug test athletes for recreational and performance-enhancing drugs. Luckily, some leagues like the National Football League (NFL) no longer test their athletes for THC due to the increase in state regulations.

Of course, if you are a person on probation or parole for criminal drug charges then you will be tested for recreational drugs. This may be as often as once a month or a few times a week depending on your case requirements.

Can you still get hired if you fail a drug test?

If a company is willing to pay to have candidates tested for THC or any other drug for that matter then it is very unlikely they will hire you despite testing positive. An employer may act as if you still have a chance but the evidence suggests otherwise.

Theoretically, if you test positive for THC despite not using the substance then you may have the opportunity to dispute the test. There are instances in which this exact thing has happened although it is rare for tests themselves to be inaccurate.

How could a false positive happen?

A study from the 80s suggested that a drug screening test with a limit of 20 ng/mL was nearly 100 percent accurate. Except the researchers expressed the stipulation that these tests are only authentic if an “unadulterated urine specimen” was used. They further expressed that as much as 15 percent of the positive tests could actually be “false positives”. Therefore, if you legitimately have not used cannabis then go ahead and explain this to the employer.

According to researcher Dwight Smith, 5 to 10 percent of drug screenings reveal false positives, and 10 to 15 percent yield false negatives.

If a false positive has occurred to you then try being transparent with the employer about any medication you may take. Certain prescription drugs can skew test results for THC. Anti-inflammatory drugs like Ibuprofen can be attributed to triggering false positives. Proton pump inhibitors (PPIs) such as Pantoprazole can also trigger this. Luckily, a follow-up drug test usually clears this problem up if you can show proof of medication use.

Some bath products like soaps and shampoos may structurally resemble THC and therefore could cause a false positive. Other compounds to look out for include hemp seed oil, vitamin B2, and riboflavin. Certain medical conditions can trigger erroneous test results such as kidney disease, liver disease, and diabetes.

Can you get in legal trouble for failing a work-related drug test?

While a company may decline to hire you if you test positive for drugs, it is not likely for them to report you to the authorities. There is no obligation for companies to do so and it is frankly not a good way for them to spend their resources.

Furthermore, states and some federal agencies have created laws to protect an individual’s privacy and to prevent exposing medical-related content beyond the scope of the pre-employment agreement.

Federally funded employers, on the other hand, can be required to report the results of your drug test to an outside agency, such as the Department of Motor Vehicles or the unemployment office, but this should not result in legal consequences.

Most often, a failed drug test will lead to a separation of employment from the company.

If you fail either probation or parole-required drug tests then the repercussions could be severe. Depending on the terms of your sentence, a drug test violation could extend your probation/parole or even land you in jail.

Unfortunately, you may not even know right away if you have failed. Your probation/parole officer marks the violation down in their reports and it eventually gets back to the judge who then decides your fate. If you have a minor drug offense then more times than not you will just get an extended probationary period rather than be tossed in jail.

The more times you fail these drug tests, however, the greater chance you have of jail time.

Can weed users keep their jobs?

Several states sadly have very little to no job protections even for legal cannabis users. However, some states are facing this problem head-on with legal reform.

A judge in Delaware in 2018 ruled that a medical cannabis patient who was fired from a factory job after failing a drug test could pursue a lawsuit against the company.

According to Judge Noel Primos, the Controlled Substances Act “does not make it illegal to employ someone who uses marijuana, nor does it purport to regulate employment matters within this context.”

In 2019, an Arizona Walmart store was admonished by a federal judge for firing an employee in possession of a medical cannabis card after she tested positive for THC. Walmart was not able to prove that she was intoxicated while working and therefore the firing was unjust.

New Jersey in July of 2019 became the 14th state to expand protections for workers who are legal cannabis patients.