What is Dill Weed

There are so many different nicknames and different strains of weed that a couple of names every now and then might slip under the radar of even the most passionate enthusiasts. If you think dill weed is one of those terms, you are technically right but also wrong.

Disclaimer: This is not a ‘weed’ that you should smoke. It may sound like it, but it would be wise to light up a dill weed joint (for reasons we will touch on shortly). However, the plant does have a number of other practical uses just like the stuff you get from the dispensary.

What Exactly is Dill Weed? 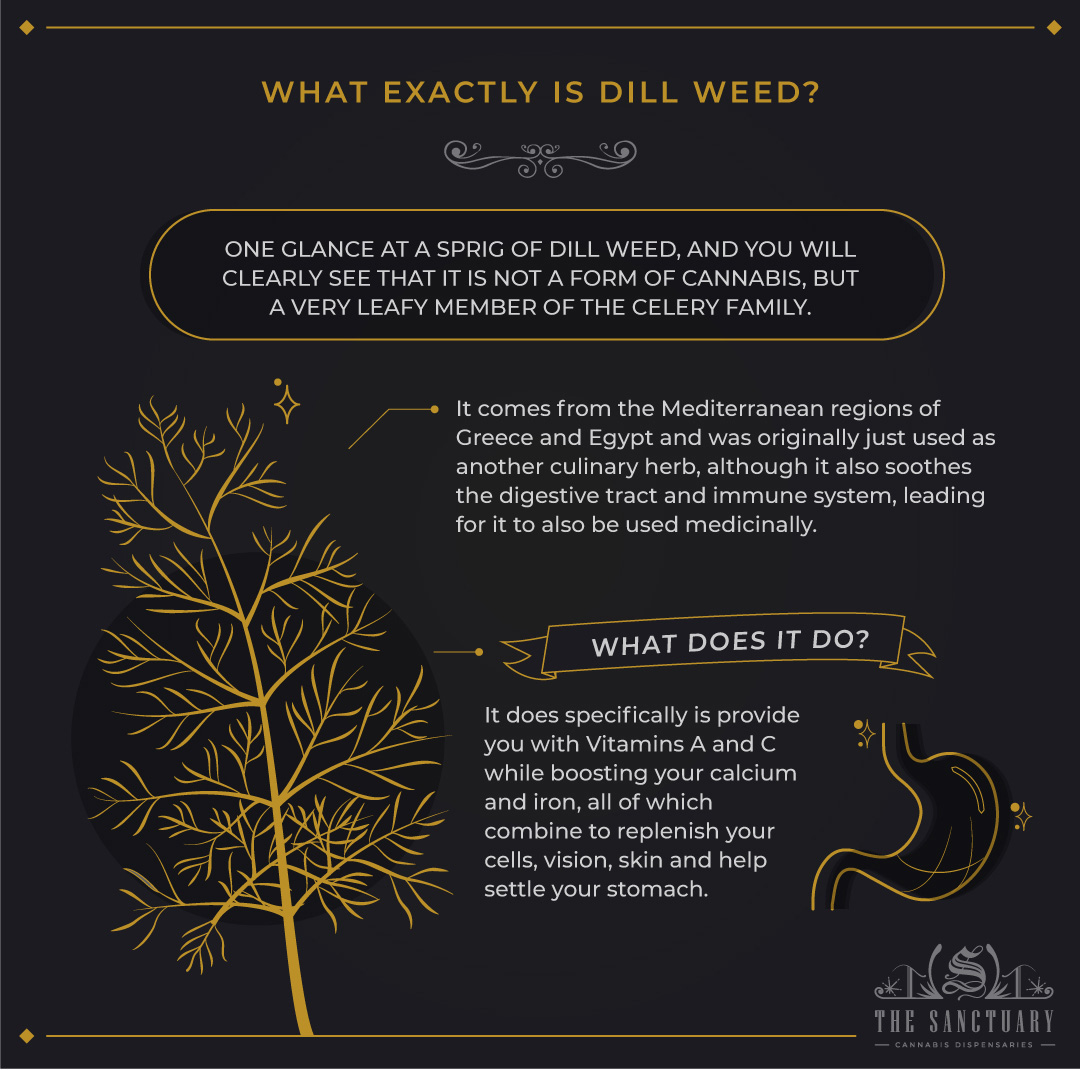 Dill is a plant that comes from the Mediterranean regions of Greece and Egypt and was originally just used as another culinary herb. But over the course of its lifetime, the Greeks found that dill soothes the digestive tract and immune system, leading for it to also be used medicinally.

What Does it Do?

Dill Weed does have some notable medicinal benefits but it is more commonly used in the U.S. as a spice, specifically for pickling. Take some sliced cucumbers with a simple brine and some fresh dill, and you’ve got pickles (hence the name: Dill pickles).

But what it does specifically is provide you with Vitamins A and C while boosting your calcium and iron, all of which combine to replenish your cells, vision, skin and help settle your stomach.

The Different Uses for Dill Weed

For about every use you can think of for actual weed, there could be as many uses for dill weed. You might not be able to use it for textiles, but dill weed offers an extensive array of culinary and medicinal uses that are simple enough to use at home.

Again, dill weed’s admittedly satisfying green color and medical benefits are not to be confused with the green stuff you buy at the dispensary and it is not meant to be smoked. However, you still have a number of ways to store and make use of your extra dill weed.

As we described, dill weed has been used as a natural remedy for thousands of years to treat nearly every common ailment we have. Would you have guessed that the stuff used for pickles can also be a cold remedy?

Probably not until just now.

But it’s true, dill is an excellent source of vitamin C and keeps your immune system functioning at its best. Not only is dill weed great for colds, it’s also ideal for a number of stomach problems (excess gas, low appetite and general aches and pains), kidney problems, and current studies are even testing dill for treating diabetes. If you name it, dill can probably do it!

With arguably the most practical use for dill weed, the recipes and possibilities seem almost endless. For how commonly we associate dill with pickles and maybe cocktails, one might not have guessed how versatile it really is in the kitchen.

You are probably wondering, “I’ve tried dill pickles and they were tart and kind of sour. Do I not want to use it in my food?” Thankfully, the real plant (whether it be fresh or dried) is not nearly as sour as jarred pickles: Pickles sit in a brine made entirely of salt, vinegar and peppercorns, which is where you get the tasty yet sour flavor.

Whole dill weed, on the other hand, tastes like something closer to basil with its warm, earthy flavoring that balances a bit of sweetness with a hint of lemon. Such a unique yet balanced flavor lends itself perfectly to salads, chips and dip, sandwich spreads and seasonings without being too ‘herby’ or overpowering.

They may have very distinct properties and uses, but one might need to differentiate the two when discussing the effects of dill. For example, dill seed is what grows dill weed and the feathery leaves that grow from it are what we refer to as diwhat is dill weedll weed (or just dill).

It may be the farthest thing from the ganja for your next smoke session, but like cannabis, dill seed has been known to be combative against certain forms of cancer as well as heart disease. Your dill seed still has those invaluable vitamins and antioxidants, but when it is burned (not smoked), it can be used to heal manageable wounds.

How Long Does Dill Weed Last?

Another key difference between dill weed and your weed is that you can put dill in the freezer for long-term storage (albeit pretty carefully). This is recommended if your meal plans change at the last minute because your fresh weed only lasts for about 7 days in a cooled yet open space.

Throw your dill in the fridge and it will last for nearly twice as long as it would in the pantry and up to six months in the freezer, but your commercially-available freeze dried dill (and other herbs) is essentially immortal: A 2 to 3-year shelf life at the bare minimum but much longer if you can pull of a vacuum seal.

Where Can I Buy it?

This is where one (technically, two) of the biggest differences between your favorite strains and dill weed. It is such a common ingredient for both the home cook and professional kitchens that it is widely available in just about every grocery store in your city. Even better, it typically goes for about $4 an ounce at the store; probably not even that.

If you are not the best at chopping, you are also in luck because dill weed comes in both fresh sprigs and pre-ground seasoning for easy application. No matter how you put it to use, you will absolutely get more bang for your buck if you’re done making pickles and have some left over.