Why Can Weed Cause Paranoia?

Weed has the overriding perception as the chill-out drug. In fact, almost a third of marijuana users in the U.S. say the main purpose of it is to reduce anxiety or stress, a recent Marist poll found. But that is not always the case; smoking can leave lots of people paranoid, anxious, and eager for the high to fade.

First, it is important to understand what paranoia means exactly. It is similar to anxiety, but a bit more specific.

The process of paranoid thinking involves believing that you are being threatened or are in danger of harm, even if there is no evidence to back up this assertion. If you are paranoid, you will think that the motives of others are suspicious without any particular reasoning behind it.

Here are some examples of paranoid thinking:

The history of weed paranoia

The cultural paranoia surrounding cannabis started during the craze of America’s post-Depression in the 1930s.

While domestic hemp production was encouraged from the 1600s through the turn of the century, Mexican immigrants flooding into the U.S. after the 1910 Mexican Revolution introduced American culture to the recreational applications of cannabis use. The drug then became associated with immigrants, with fear and prejudice about Spanish-speaking newcomers becoming synonymous with the plant itself.

Widespread unemployment increased public resentment towards Mexican immigrants during the Depression. This manifested into the demonization of marijuana, then known as the “Marijuana Menace”.

By 1930, the commissioner of the newly-minted Federal Bureau of Narcotics, Harry J. Anslinger, was pushing for cannabis to be outlawed primarily due to “its effect on the degenerate races.” One year later, 29 states had outlawed cannabis.

Few scientific studies have been done to quantify why cannabis can make people feel paranoid and anxious. The main reason for a lack of clarity is because of weed‘s status as a Schedule I substance. The small amount of research available suggests that the cannabinoid THC is the culprit behind the paranoia.

It is not uncommon for new or inexperienced users to become anxious after smoking weed. Some side effects may include a rapid heartbeat and intense paranoia. This is a result of THC activating the autonomic nervous system. A racing heart could be the result of THC directly binding to heart tissue.

A rapid heart rate will engage the body and the brain to go into “fight or flight” response, which brings along a heightened feeling of anxiety and paranoia. High doses of THC are the causes for this reaction, though commonly these side effects will diminish when users develop a tolerance to THC.

Start low and go slow. By slowly increasing your doses every time you smoke, you should be able to avoid feelings of anxiety. Eventually, these users will overcome anxiety and experience THC’s benefits. However, overcoming paranoia from cannabis is far less straightforward. There has been a long-standing link between schizophrenia (paranoia is a symptom of this illness) and weed use.

It is unclear whether weed use is a direct result of paranoia. However, weed smokers are more likely to report thoughts that people around them are deliberately trying to harm them.

A study done in 2014 is the most comprehensive research involving THC and paranoia to date. Funded by the UK’s Medical Research Council, the piece was published in the journal Schizophrenia Bulletin and was led by Prof. Daniel Freeman, Ph.D., of the University of Oxford.

The participants reported a change in their perception caused by THC. They claimed altered perceptions of time, noises becoming louder, clouds becoming brighter, and an increase in negative thoughts about oneself or anxiety. The negative feelings about oneself were found to be created by changes in perception, leading to the feeling that something frightening or strange was happening.

A study published in 2019 experimented on rats to demonstrate how THC and the body’s natural endorphins drive the complex interactions between THC’s opposing forces of paranoia and pleasure. The nucleus accumbens is the part of the brain’s reward pathway where these interactions happen, which is primarily responsible for helping us respond to and sort out unpleasant and pleasant experiences.

Factors that can cause paranoia

Paranoia after smoking weed is not everybody’s experience. It is usually an occasional reaction for users brought on by various reasons. Beyond environmental conditions, there are some leading ideas from researchers as to why people get paranoid from smoking weed. 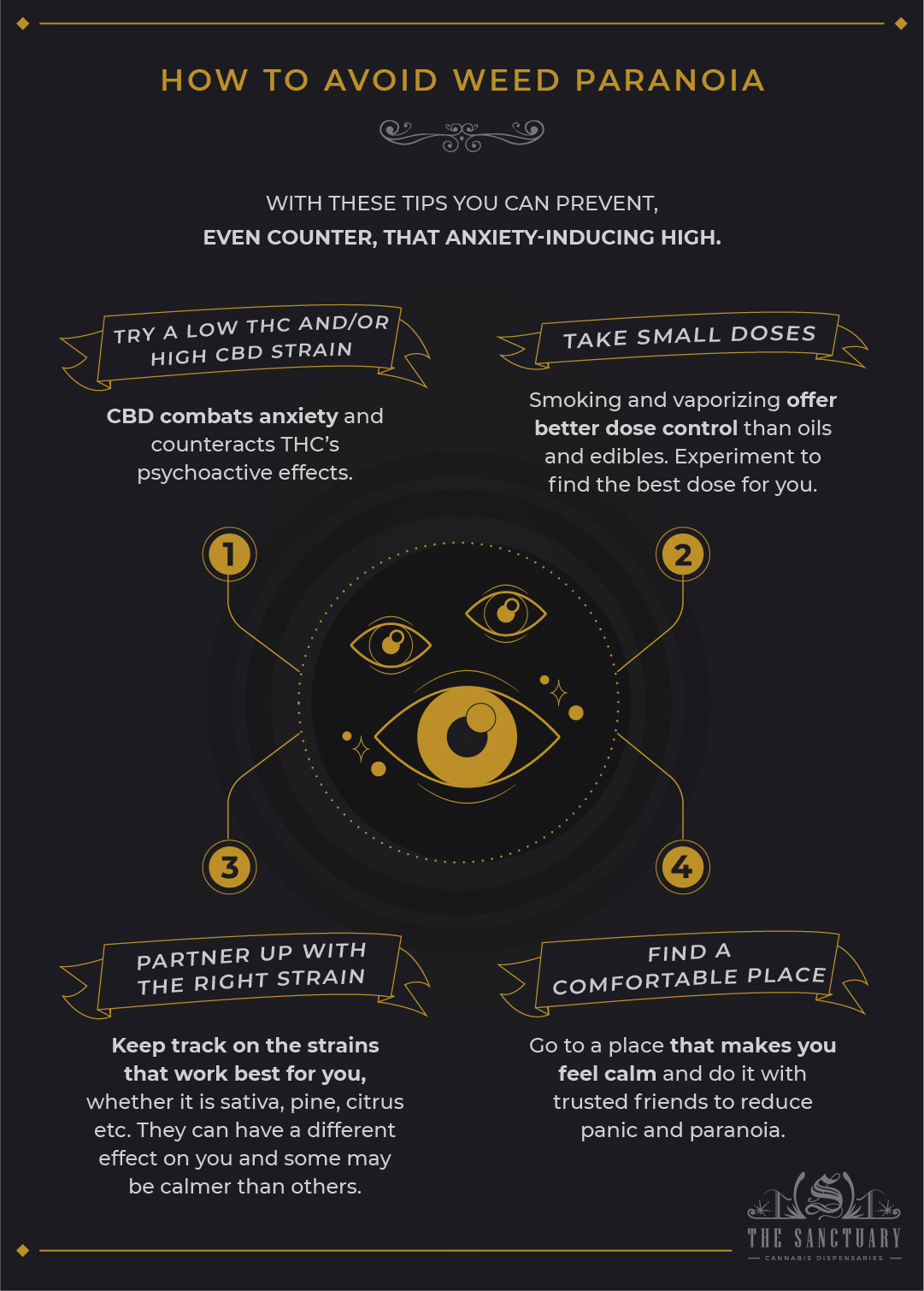 If you are susceptible to or worried about cannabis-induced paranoia, luckily there are ways to prevent, even counter, that anxiety-inducing high. Here are just a few tips: