Can You Overdose From Weed?

While cannabis can have severe health implications, most medical professionals believe that it is unlikely to cause death. Weed’s psychoactive effects might be alarming, but they are not always hazardous.

Smoking cannabis, however, can impair judgment and motor abilities, thus doing so before driving or engaging in other potentially hazardous activities may raise the chance of an accident.

Most specialists, on the other hand, believe that the danger of dying from weed is quite low.
This is not to say that weed is completely risk-free.

While many people focus on the therapeutic components in weed, such as cannabidiol (CBD), there are some potentially negative side effects of cannabis, especially when used long-term or by children.

How much is too much?

Because everyone is different, there is not a simple answer here. Some people appear to tolerate cannabis well, while others appear to have a negative reaction to it. The strength of cannabis products also varies significantly.

People who do not use cannabis regularly may have a negative reaction to cannabis products containing high quantities of tetrahydrocannabinol (THC), the chemical that makes you feel “high” or impaired.

A person is unlikely to die from a weed overdose, according to the Centers for Disease Control and Prevention (CDC), although this does not rule out the possibility.

Colorado was one of the first states to legalize marijuana for recreational use in 2014. Since then, the frequency of emergency room visits due to weed usage has increased dramatically.

However, these numbers may be inaccurate. Due to the past restrictions of cannabis, people experiencing unpleasant effects as a result of using weed may have skipped the trip to the emergency room to protect themselves from legal trouble. Some of the most prevalent conditions linked to weed usage have also grown in Colorado since legalization, according to new research published in Missouri Medicine. These are some of them:

Psychosis is defined by a distorted perception of reality. It is a sign of a significant mental illness. People suffering from psychosis may have hallucinations or delusions. Sensory experiences that occur in the absence of real stimuli are known as hallucinations.

In addition, a person suffering from psychosis may have ideas that are contradictory to the evidence. Delusions are the term for these kinds of ideas. Psychosis can lead to a lack of motivation and social isolation in certain people.

Several lines of evidence point to a link between cannabis use and many mental disorders, including cannabis-induced psychosis (CIP). While it might be difficult to tell the difference between CIP and other psychoses, it does have certain distinct traits that can help with diagnosis.

With the growing drive for cannabis legalization, it is more important than ever to diagnose CIP and use prompt therapies.

Long-term weed usage can cause cannabinoid hyperemesis syndrome (CHS). Vomiting and nausea occur frequently and are severe. CHS was initially identified in 2004 by medical professionals.

Doctors treating frequent weed users for nausea and vomiting in South Australia were the first to report it. Cannabis usage is common in people with CHS. They also have vomiting spells that last for weeks or months.

Symptoms of nausea and vomiting generally disappear when patients with CHS stop ingesting cannabis. If they resume usage, nausea and vomiting are likely to reoccur. Treatment recommendations for CHS management are currently unavailable to clinicians. Published case reports provide the vast majority of evidence for effective therapy and management.

Many doctors may find it difficult to identify and treat CHS because it is a relatively new illness. Although researchers have attempted to understand what causes CHS, further research is required.

Cannabis-derived chemicals have been associated with an increased risk of heart attack, heart failure, and atrial fibrillation. However, those studies were observational and did not establish that other substances could be to blame for the higher risk.

According to one research referenced in the AHA statement, 6 percent of heart attack victims under the age of 50 smoked cannabis. It was associated with a higher risk of death from all causes and cardiovascular disease.

Experts point to a scarcity of reliable evidence when it comes to defining the risks and advantages of cannabis on the cardiovascular system. According to the AHA report, prior research may only represent the effects of lower amounts of THC in humans due to growing THC concentrations in cannabis.

Can you overdose from weed edibles? 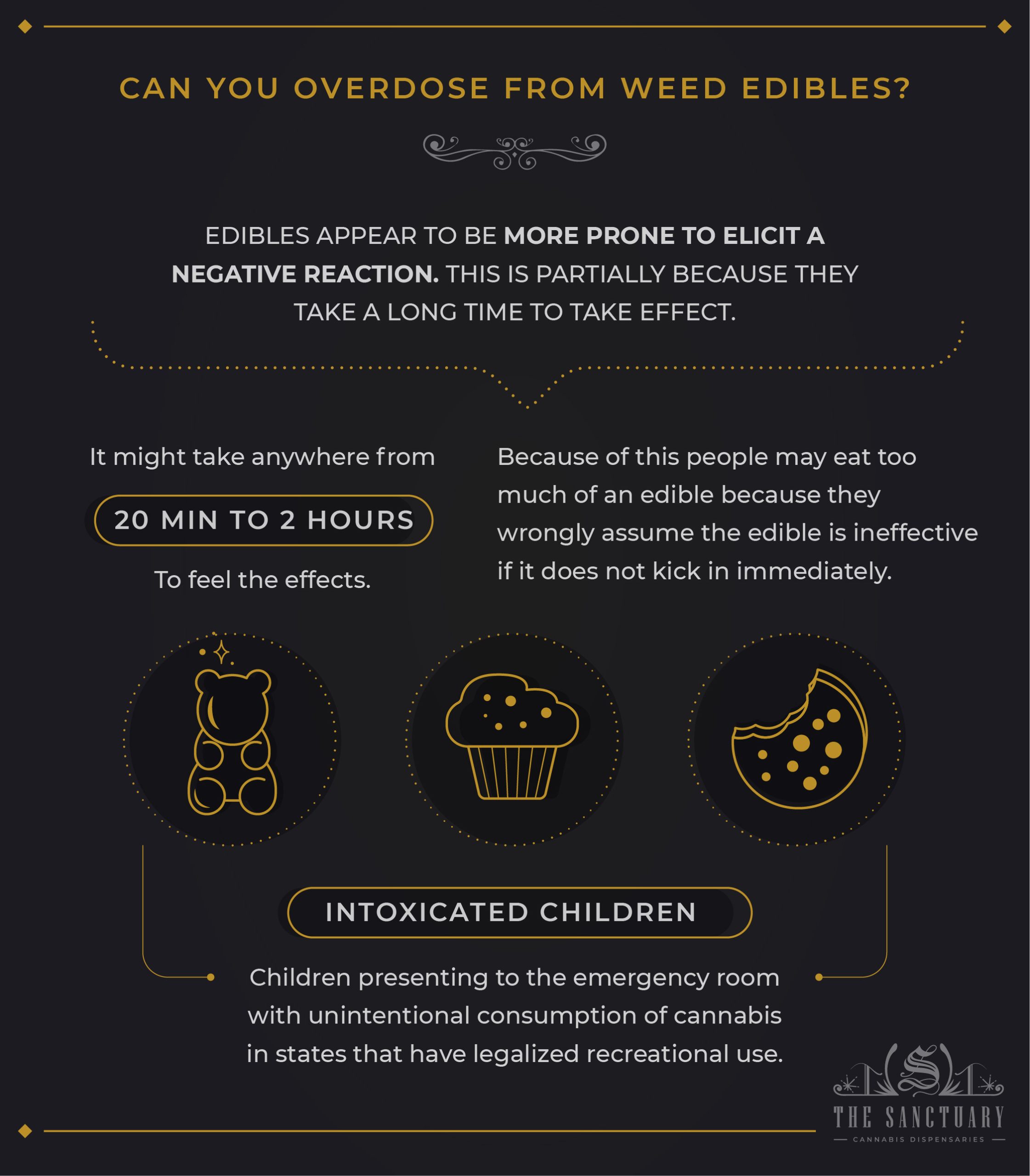 Edibles appear to be more prone to elicit a negative reaction. This is partially because they take a long time to take effect. It might take anywhere from 20 minutes to 2 hours after consuming an edible to feel the effects.

Meanwhile, many individuals may eat too much of an edible because they wrongly assume the edible is ineffective if it does not kick in immediately.

In states that have legalized weed for recreational use, children presenting to the emergency room with unintentional consumption of cannabis is becoming more prevalent. With weed being more commonplace, it is a lot simpler to just leave your edibles out on the table for the kids to get into.

Can you overdose from synthetic and laced weed?

While natural cannabis may not be toxic enough to induce an overdose, newer synthetic versions of THC, such as Spice or K2, that have been accessible on the black market for years are a different matter.

These drugs have significant side effects and can be quite toxic since they lack the balanced components found in cannabis. Many of these synthetic weed products are complete agonists, as opposed to partial agonists like biological THC.

Another issue arises when weed is mixed with other drugs, such as psychedelics, fentanyl, opioids, or designer medications. Other medications can potentially disrupt the equilibrium between THC and CBD, enabling harmful components in cannabis that are typically restricted to cause greater harm.

As a result, mixing weed with narcotics like opiates or cocaine might result in a poisonous concoction that is more than the sum of its parts.