How Does a Bong Work? [Explained with Images]

The bong is so ingrained in weed culture that many connoisseurs go so far as to name their pieces, turning the otherwise inanimate object into a personality within their smoke circle. 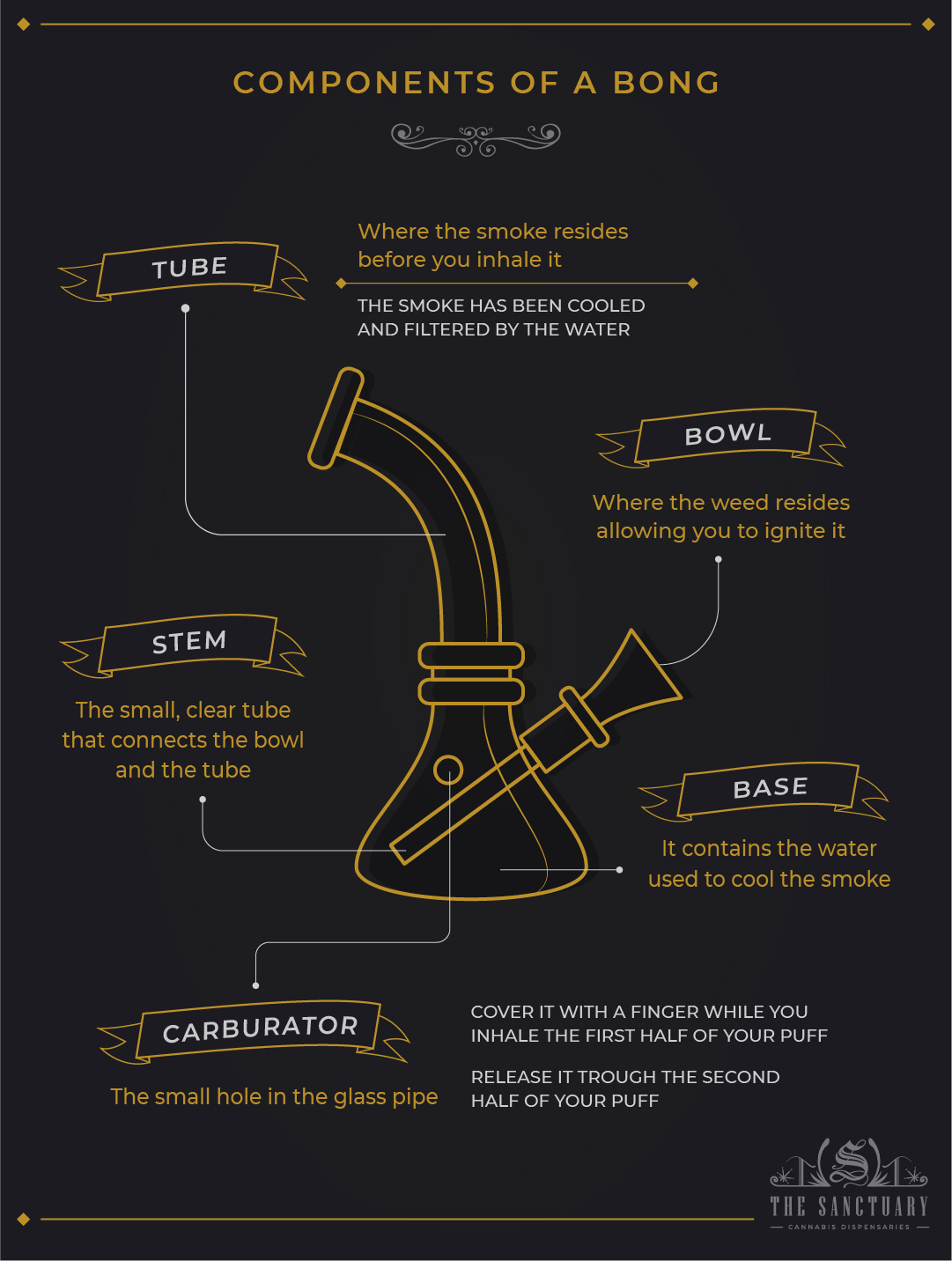 The history of bongs

The glass bongs we use today are supposedly the evolution of round wooden bamboo tubes that were used hundreds of years ago. The term “bong” is reportedly derived from the Thai word “baung.”

The act of using a water pipe to cool down smoke can be traced back to China’s Ming Dynasty. Africa also has historical variations of a bong, where tribes would construct earthen bongs into the ground using the same mechanics of contemporary bongs. Records also indicate an ancient nomadic race in what is currently Russia that used bongs made of pure gold.

Bongs also resemble hookahs, which have a hose as a mouthpiece and are traditionally designed to allow multiple people to smoke from the same bowl all at once.

Bongs of today take on many different forms. Most commonly they are clear glass tubes with a downstem and a bowl. However, glass blowers and artists have experimented with styles to add excitement to the smoking process using different colored glass and unique shapes and sizes. The bong can also be made from materials other than glass including hand-carved wood, bamboo, ceramics, and even plastic.

Plastic bongs are not recommended, however, as they pose potential health risks from heating up the plastic and potentially melting it; causing dangerous gases to form.

How do they work?

Bongs come in all shapes and sizes. Some are very basic with just a bowl and chamber. Others are colorful, mouth-blown works of art.

At the end of the day, they all do basically the same thing, filter and cool the smoke that comes from burning cannabis.

Bongs generally feature a small bowl that holds dried weed. When you light the weed it combusts. Meanwhile, as you inhale, the water in the bottom of the bong bubbles (percolates). The smoke rises up through the water and then the chamber before entering your mouth and lungs.

Components of a bong

A bong has a few composite parts that are mostly universal to all bongs:

The tube of the bong is perhaps the most identifiable part; it is the chamber wherein the weed smoke resides before you breathe it in. The smoke that is held here has been cooled and filtered by the water in the bowl, making it easy to intake the smoke whenever you are ready. This is the one component that does not really ever change from its straight, cylindrical appearance.

The bowl of the bong is where you hold your marijuana as you are using it. The weed sits there, held in the internal divot, allowing you to light it. The bowl is then connected to the stem, which allows the smoke to pass down into the tube.

The downstem of the Bong is the small, clear tube that connects the bowl and the tube. Many bongs actually have special stems that allow them to serve as more than just the simple holding device that they appear.

On some bongs, the stem is the part that holds the water, freeing up the bong from having to have a wider, flared bottom in the base. Additionally, by removing the stem from its hole, the next key component of the bong is exposed.

Also known as a “carb” or “choke”, this component is not necessarily included on all bongs, but important to learn because there is an essential use for it. The carb is a small hole on the glass pipe. It is located directly next to the bowl on the side of the bong. If there is a carb, be sure to cover the carb hole using your thumb or finger while inhaling the first half of your puff. Then release your finger and allow air to flow through the carb hole while you inhale the second half of your hit.

The base is the bottom part of the bong that contains the water used to cool your weed smoke. The design of this part of the bong varies between different products, but they are most generally shaped like a beaker, with a flared bottom that makes it easier to stand it up while using it.

Why use a bong?

A bong can be the biggest and most expensive smoking device to own. For those reasons people may wonder if it is worth it. Truth be told, not everybody will like bongs. For some, they produce a much larger hit than needed and can become stinky if the water is not changed frequently.

However, there are plenty of reasons that bongs have good standing in the cannabis community. The main reason is that bongs filter hot smoke through water and sends it up a tube – all the while cooling off the smoke before it hits your lungs. Another reason is that you can get a huge hit that you cannot achieve with a handheld glass pipe.

Smoking from a bong is going to be the smoothest hit you can get from smoking weed. However, a word of advice, be careful not to take too big of a hit, or else you will feel an uncomfortable burning feeling in your lungs. If the smoke in the tube of the bong fills to the top then pull the bowl out and inhale. Try not to let the smoke build too much; if the smoke starts to become darker in color, that is a sign that the hit will be very dense and therefore harsher than usual.

How to use a bong?

Many people think the act of using a bong is inherently simple. However, it actually requires a little bit of knowledge beforehand.

The first step to using a bong and making it work is grinding up your weed. You want to achieve a coarse grind, one that is not going to be too big that it struggles to be lit, while at the same time one that is not so small that it falls into the stem and ends up lost in the bong water.

The next step, light the weed.

As you light the weed, you need to breathe in as the weed catches gently. This allows the smoke to pull into the tube through the stem. As it passes through the water, the weed smoke is both purified and filtered, while also being cooled.

Due to the fact that the water is cooler than the hot weed smoke passing through it, a good deal of the heat is passed to the water, making the resulting smoke that you breathe in that much cooler. It also gets rid of residual plant matter that would otherwise clog up your lungs, making the whole experience more pleasant.

Once you have pulled all the smoke you want from your burning weed, you then need to inhale it.

To do so, you either uncover the carb or remove the stem, depending on your particular type of bong, and then inhale. The reason this works so well, and why the weed smoke does not merely get inhaled when you were breathing it into light the weed, is because it did not have any air to push it through.

To best illustrate this, imagine sucking air through a straw; it is essentially just like breathing in normally.

The only thing that you need to keep in mind when using a bong is that, because all of the smoke created by the weed is inhaled at one time, it can be pretty overwhelming for those not used to it.

As all of the smoke enters your lungs together, it is very common for inexperienced weed smokers to burst into a coughing fit. This can actually hurt your throat quite a bit, so it is best to keep some cool water on hand to help calm your inflamed throat if you start violently coughing. Be assured, this will only get easier and more controlled as users get more experienced.