Smoking Weed for the First Time

As weed becomes more widely accepted, more adults are trying it for the first time. According to recent research, 44 percent of Americans have tried cannabis, and the number is rising.

If you’re trying cannabis for the first time as an adult, you’ve probably been exposed to numerous fallacies about its usage thanks to anti-drug education programs like D.A.R.E. and the Reagan-era “Just Say No” campaigns.

Weed usage has been vilified in our nation for over a century, with enormous propaganda operations aimed at discouraging use. This comprises several tales that have been easily debunked by scientists and consumers alike.

Cannabis has various effects on different people, and for some first-time users, it has no effect at all. That is very normal and rather frequent. Others will feel dizzy, while others will become fully stoned and start tripping. You could get the munchies, or you might simply pass out. It depends on the strain, how much you consume, and how you feel.

What happens to my body when I smoke weed?

Smoking cannabis is a highly subjective experience; each person will feel and express it differently and like it for various reasons. Smoking cannabis, on the other hand, has a number of side effects that can be linked to all users.

The first is an increase in heart rate, which occurs often after smoking. At very high dosages, blood pressure drops somewhat, which might cause light-headedness. The eyes get redder, and the body’s muscles become weaker. The desire to eat is typically heightened. Hearing and vision are sometimes improved, and time appears to slow down.

The majority of users also experience dry mouth, or “cottonmouth.” All of these effects should be expected and are not cause for concern. The physiological effects are very similar between users, but the psychological consequences vary significantly between people, strains of cannabis ingested, and ingestion technique.

Some people claim to feel more open, creative and connected to others as a result of the treatment. Some users, on the other hand, report feeling sluggish, paranoid, or more introverted.

This is due to both individual biology and the many sorts of weed available. Cannabis is often categorized as sativa, indica, or a hybrid of the two. Sativa strains produces a more intense high that stimulates the mind, boosts creativity, and is invigorating. Indica strains are associated with relaxation, a slowing of the mind and body, an increase in hunger, and a reduction in anxiety.

Every user has their own preferences, and they may switch between strains at any moment during the day (i.e. sativa for the daytime, indica for the night). If it’s your first time, an indica is usually advised because it’s less likely to cause paranoia.

Once you have a better understanding of how you will respond, you may experiment with other strains and ways of consumption, such as tinctures or edibles.

Why do first-time smokers not get high?

First-time cannabis smokers frequently report that they don’t feel anything and are disappointed by their expectations. According to urban legend, “your body has never been exposed to THC and hence does not know how to use it.”

In the 1980s and 1990s, research into the endocannabinoid system substantially disproved this theory. It’s more than likely a technical issue. According to the research, beginner users absorb less than 10% of the THC since they don’t know how to draw the smoke into their lungs and instead they smoke it like a cigar.

A more experienced smoker, on the other hand, absorbs 28 percent of THC. If you still don’t feel anything, try again, but this time breathe the smoke in deeper.

If you’re having difficulties taking deep draws, hit the weed and then inhale again before exhaling. This repeated inhalation guarantees that you are breathing smoke and allows the smoke to cool somewhat in your mouth, making the second round less unpleasant to inhale.

How should I use weed for the first time? 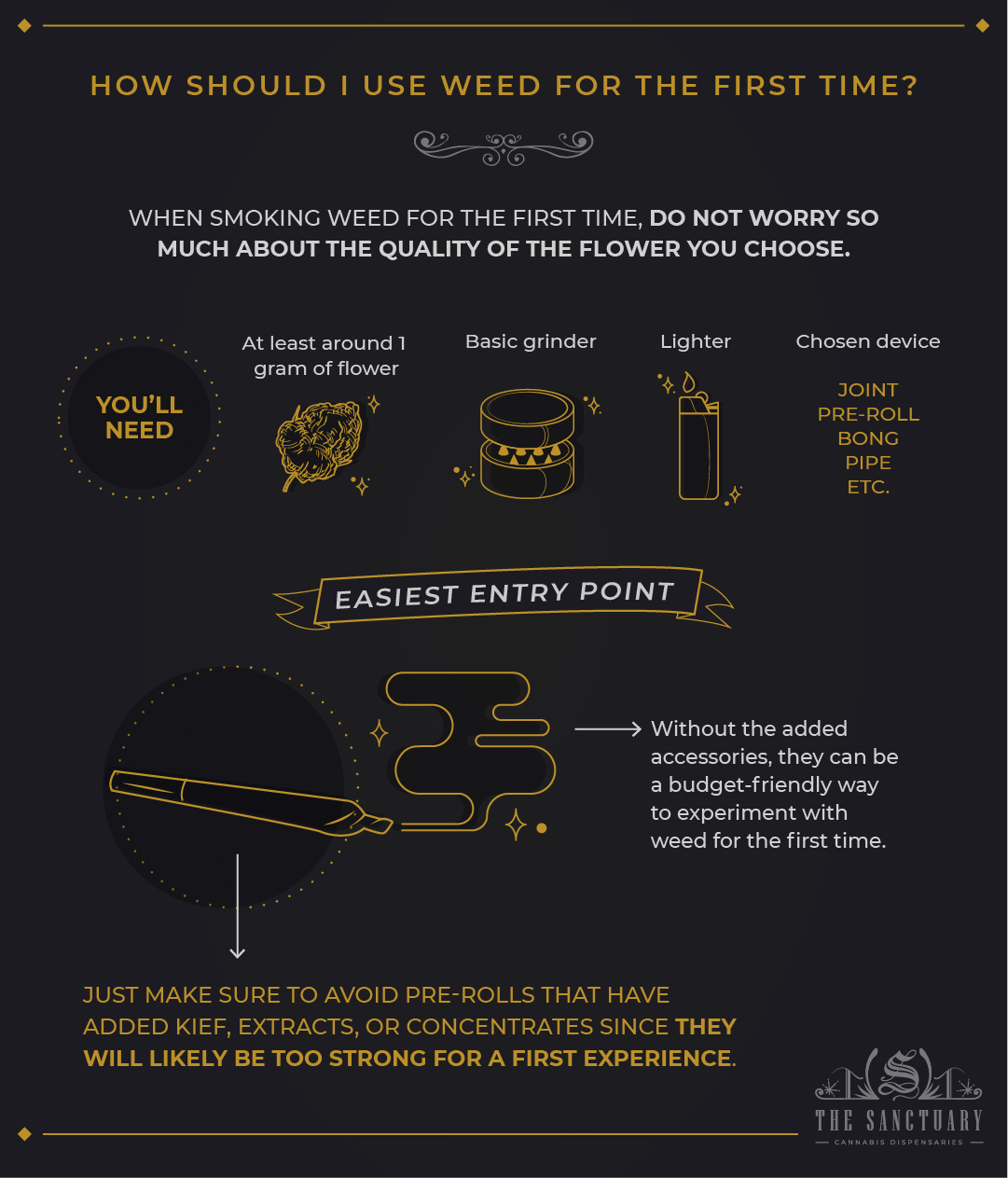 You may pick from a variety of products, ranging from single pre-rolled joints to decadently branded jars of premium flower. When smoking cannabis for the first time, don’t be too concerned about the flower‘s quality.

That may seem counterintuitive, but if you buy cannabis from a licensed brand and store, you can be certain that you’re getting a high-quality product that’s been thoroughly tested for germs, pesticides, and other dangerous chemicals.

Instead, concentrate on how you want to consume the strain of your choice. Do you want to roll your own joint or buy a pre-rolled joint? Do you want to try toking a bong for the first time or do you have a pipe? Whatever gadget you select, you’ll need at least 1 gram of flower, a basic grinder, and a lighter, in addition to your device.

Pre-rolls are the simplest way to start smoking cannabis because all you need is a lighter or match in addition to your pre-roll. They can also be a cost-effective method to try cannabis for the first time without the additional accessories. Just keep in mind that pre-rolls with additional kief, extracts, or concentrates are likely to be too powerful for a first-time experience.

Drink water before you start

Cottonmouth is one of the most prevalent adverse effects of cannabis use. A bottle of water should be kept nearby to rehydrate and keep your mouth wet. Pre-hydrating yourself before you start smoking is a good idea.

Because this will be your first time smoking cannabis, you should start small and work your way up rather than diving in head first and smoking for hours. As a result, you won’t have to drink a lot of water before smoking a fair quantity.

Cottonmouth is just transitory and not to be concerned about. Tetrahydrocannabinol (THC), the major psychoactive cannabinoid generated by the cannabis plant, is known to bind to cannabinoid receptors in the submandibular glands, which produce saliva in the mouth.

The signal for saliva production is turned off by THC, which is why we get a dry mouth. Everything returns to normal once the THC effects in our system have worn off, and the cottonmouth side effect vanishes.

Do not smoke alone

It is not a good idea to take a mind-altering substance for the first time if you have no prior experience with it. You have no clue how cannabis will affect you because you have never tried it before. It’s best to have someone present who is reasonable and that you know and trust.

If you have a negative encounter and feel overwhelmed by the consequences, they will help you stay grounded. They should also be able to inform you when you’ve eaten enough food, so you don’t overeat the first time around.

You will feel a lot more comfortable smoking a joint on your own if you’ve had more experience smoking cannabis and understand how it affects you. Make your first smoking experience as pleasurable as possible. It will be a lot more enjoyable if you have a friend, or a group of friends, to share the experience with.

Music helps to lift the mood

To get the most out of your high, you must be in the correct frame of mind. You will lose out on the experience if you are too weary and fall asleep. You may get paranoid and worried if you are nervous. The goal is to relax and enjoy yourself. If you have a favorite type of music that puts you in a good mood, go ahead and listen to it. It will also give your experience a whole new level.

Music, as we all know, elicits an emotional reaction in individuals. Choose some music that you love and that will help you relax as you prepare to smoke cannabis for the first time. Choose music that is cheerful and simple to listen to.

You could find yourself singing along to whatever music is playing in the background after a few tokes. Music will add to the enjoyment of the trip, especially if it is shared with excellent companions.

Will I get addicted if I try it?

It was formerly thought that smoking only one weed cigarette would transform you into an addict, as depicted in films like Reefer Madness. This is far from the case; in fact, because cannabis does not affect the same dopamine reward pathways in the brain as nicotine, cocaine, or even sugar, it is extremely difficult to become physically addicted to weed.

People can acquire a habit of using cannabis, but whether excessive cannabis usage can produce withdrawal symptoms if stopped is still a point of contention. Research done in 2006 of males and females who used cannabis revealed that after a year of regular usage, the probability of dependency for males was less than 1 percent.

After two years of usage, the percentage increased to 4 percent before declining. Less than 1 percent of women were dependent after a year of frequent usage, and this number did not alter in future years.