The methods and language used to refer to weed have changed over the decades; however, one constant has remained. We still use the same weed measurements to refer to different quantities of weed. 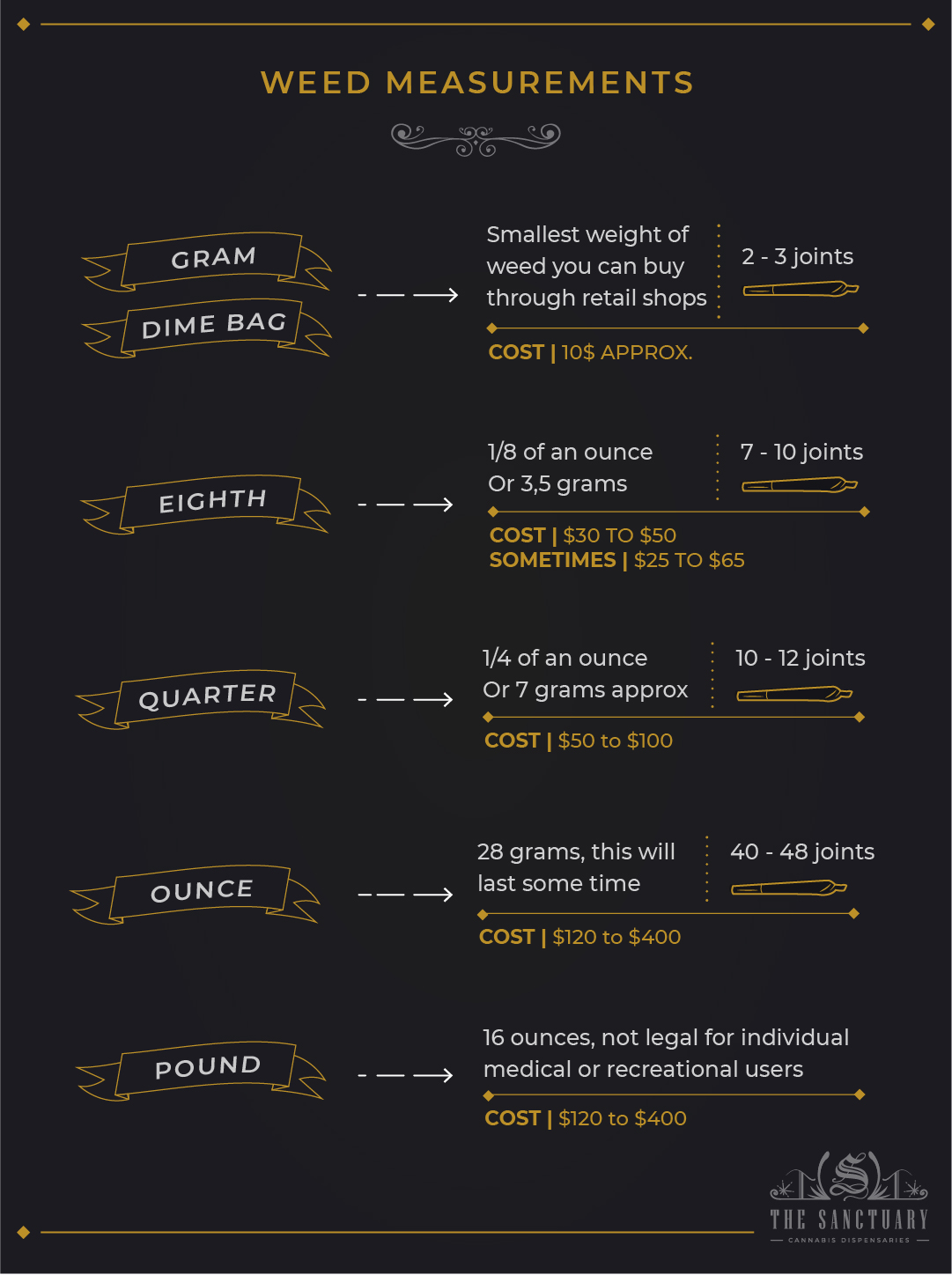 When it comes to purchasing cannabis, the gram is the unit of measurement that is used. A gram should be the same no matter where you purchase from. However, keep in mind that a gram may look different from one strain of weed to the next. This depends largely on strain genetics and curing practices by cultivators.

How much weight is a gram of weed?

A gram is defined as a “metric unit of mass equal to one-thousandth of a kilogram.” The smallest increment of cannabis flower you can purchase from a store is a gram. A gram also equals 1/28th of an ounce.

There are countless slang terms for cannabis. New ones seem to pop up every year. The slang term for a gram however has been around for a while. “Dime bag” is the iconic name for a gram of weed. It refers to the price per bag (10 dollars) that people on the black market commonly would get. A dime bag may also be called a “10 sack.”

Of course, this slang comes from the days of pre-legalization. If you were to go into a dispensary asking for a dime bag they may not have any flower for specifically 10 dollars.

An eighth refers to ⅛ of an ounce of cannabis. An eighth of an ounce technically weighs 3.5436904 grams, but dispensaries and other purveyors typically round down to 3.5 grams. This allows for easier measuring and calculation.

How much does an eighth cost?

Among legal dispensaries, an eighth costs between $30 and $50 on average. In some regions, you may find an eighth for as little as $25 or as high as $65.

The next unit of measurement is a quarter. A quarter refers to ¼  of an ounce, and it weighs approximately 7 grams. Technically, a quarter weighs 7.0874 grams, but the industry standard is to round down to the nearest gram.

A quarter of weed usually amounts to five blunts or 10-12 joints. And of course, if you like to smoke out of glassware or bongs, the amount of use you get will be subjective to how you pack your bowls.

How much does a quarter cost?

A quarter costs in the range of $50 and $100, depending both on where you get the cannabis, and the quality.

Slang terms for a quarter of weed include a “quad” and a “Q”.

28 grams make up one ounce, so 14 makes up a half. Most people will not go above this range as an ounce is plenty to last one person quite some time, ranging between $120 to upward of $400; though some places may charge more for their top-shelf ounces. Common names for an ounce are “O” or “zip”, which comes from the old days when an ounce would usually take up a whole zip-lock bag.

This enormous amount of cannabis is not legal to individual recreational or medical users anywhere in the United States of America. A pound contains 16 ounces, and this is the equivalent of 454 grams.

These larger measurements are not of interest to most cannabis users, but they can be useful for making your own concentrates.

You may have noticed that weed measurements start out in the metric system, then change to the imperial system as quantities get larger. While this mix of imperial and metric systems are initially confusing, you will soon get the hang of it, especially if you look at the measurements from the smallest to largest.

Weed measurements can also be considered from the perspective of how much active THC is in a specific amount of cannabis. There are over 100 compounds in cannabis but THC is the singular psychoactive element, therefore, measuring the amount of it is rather important.

The amounts of THC that are available for purchase vary greatly. In general, weed measures in at between 12-30 percent THC.

The reason it is important to measure the THC content is so that consumers are able to hone in on an exact level of intoxication or medication that is right for them. This is one of the advantages of legalizing and regulating cannabis. New users can feel comfortable as they shop for a lower percentage of THC, while experienced users can test their chops and try a strain that clocks in at near 30 percent.

Of course, not all weed is sold in the form of flower. Having awareness of the THC content in concentrates, such as shatter, hash, wax, and edibles is also important.

For concentrates, THC content is measured in milligrams. For example, an edible may have been made with flower that measures out to 20 percent THC, but the total content of that active THC in the edible may only be equal to 10 milligrams. Flower that is 20 percent THC is relatively strong but a 10 mg edible is roughly medium strength.

Measurements also apply to strain types. There 3 major types of weed strains. Indica, sativa, and a hybrid of the two. These different weed strains are associated with different effects. For example, an indica is associated with relaxing, sedative effects that are mostly felt in the body. Sativas on the other hand, are more cerebral, energizing, and social strains that mostly affect the mind. A hybrid is a combination of all of those.

With this in mind, it is important to measure strains to see if they either lean towards sativa or indica. Nowadays, hybrids are more and more prevalent which means that not many strains are 100 percent sativa or indica. You may see strains referred to as “indica-dominant” or “sativa-dominant.” This means a ratio of about 80-20 or 70-30 sativa or indica. Hybrids are often measured as 50-50 of 60-40.

Weighing your weed at home

Luckily, the days of worrying if your weed dealer has shorted you on your weed measurement are over. Dispensaries by law operate under honest measurements. Therefore there is no need to ask a budtender to weigh out your weed in front of you.

However, if you are one to double-check your weed purchases you will need to buy a scale. A typical bathroom scale for your body weight will not suffice. Weed scales are not hard to find but they can range in design and quality. Here are some things to consider when choosing a scale for purchase: