How Much Is An Eighth?

While the legal cannabis industry may be a new market in our economy, the purchasing of weed has been going on for decades. Due to the large popularity of cannabis before legalization, many users are already familiar with the way cannabis is sold and purchased.

So much so that knowing the quantities of cannabis is second nature. However, there is an increasing market for first-time weed users who may not understand the measurements used for cannabis and the lingo that comes along with it.

The eighth is one of the most commonly sold quantities of weed in the United States. For those new cannabis users out there, you may be wondering:

“How much weed is in an eighth?” 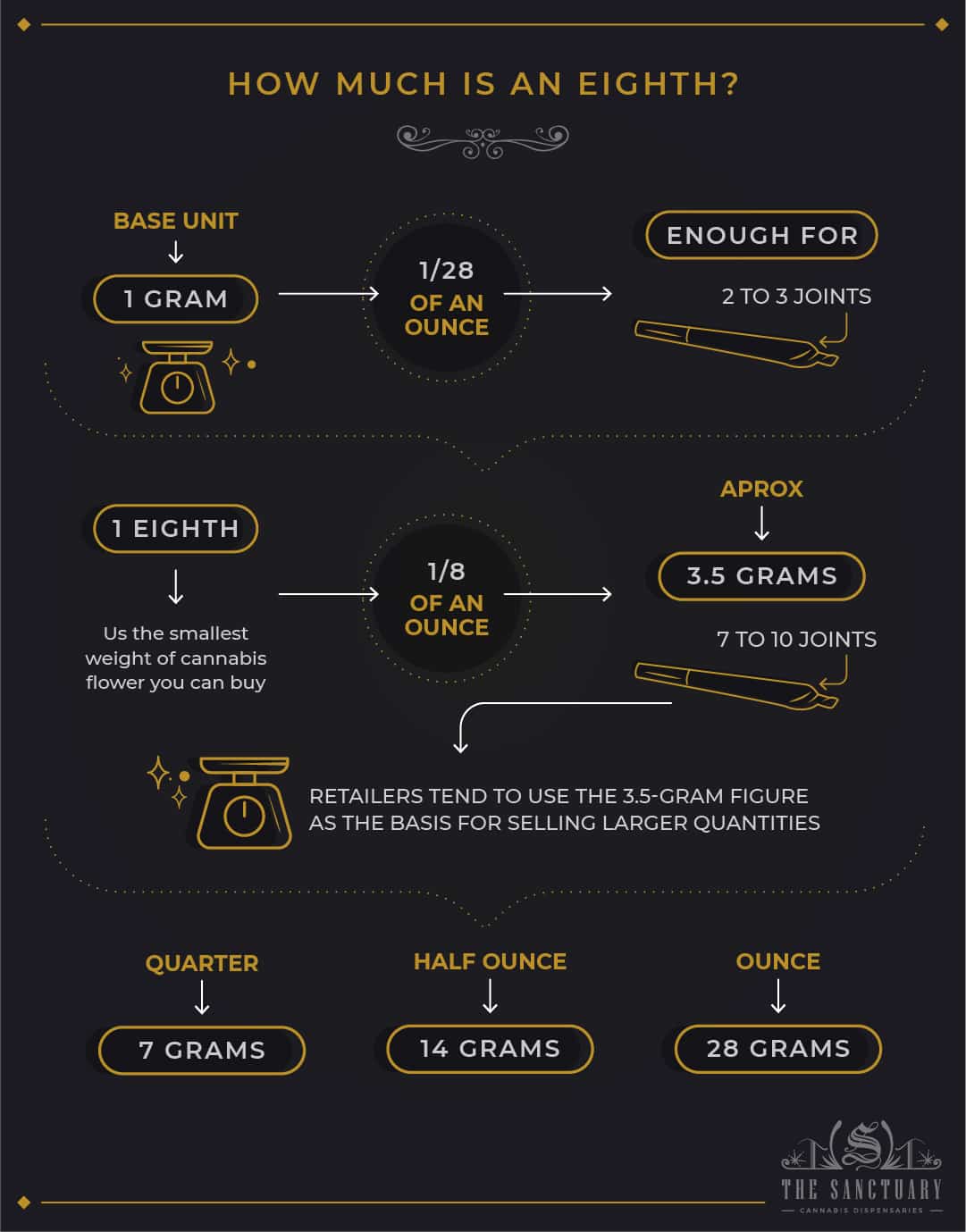 The gram is your base unit of measurement when it comes to buying cannabis. A single gram is enough for 2-3 joints (depending on how you roll) or about one blunt.

How much is a gram of weed?

A gram is the smallest weight of cannabis flower you can buy and it does not weigh much of anything. To put this into context, a gram is one twenty-eighth of an ounce (1/28). One gram is comparable to the size of a bottle cap.

How many grams are in an eighth of weed?

An eighth refers to ⅛ of an ounce of cannabis. Technically, an eighth of an ounce weighs 3.5436904 grams, but dispensaries and caregivers often round down to 3.5 grams. This makes for easier measurements.

How much does an eighth cost?

Among legal cannabis retailers, an average cost for an eighth is between $30 and $40. In some areas, you may find an eighth to cost as little as $25 or as high as $65. The price of an eighth depends on many factors:

What are 5 gram eighths?

So if an eighth of an ounce weighs approximately 3.5 grams, what is a “5-gram eighth?” Perhaps you have heard this before and have been confused. A 5 gram eighth refers to 5 grams of weed that is sold at the usual price of an eighth. This is often advertised as a promotional deal and is a mechanism to stand out from other cannabis retailers.

Cannabis is usually purchased by the gram, eighth, quarter, half-ounce, or ounce. Similar to the black market, if a consumer purchases a larger weight then there is typically a price discount. Each state or country has specific restrictions on how much cannabis an individual may possess or even how much they can purchase per month. The legal limits in most states and countries are declared in grams and ounces.

How do people around the world weigh weed?

Every country except Burma, Liberia, and the United States uses the metric system. With different units of measurements around the world, one might think that other countries would have different systems to weigh their weed.

However, in the cannabis game, most other countries have adopted using the metric system. Therefore, cannabis is often measured by grams no matter where you are.

How long does an eighth last?

After learning how much an eighth of weed is, your next question might be just how long that amount can last for the average smoker. There are several factors to this equation including the method in which you typically consume cannabis; whether it be smoking a bowl, bong, joint, blunt, etc. How often you smoke weed obviously has a lot to do with it as well.

A glass bowl can hold roughly between 0.25 gram and 1 gram, depending on its size. If you have an average-sized bowl, you can assume it holds roughly half a gram of weed. This means you will be able to smoke about 7 bowls when you purchase an eighth. If you smoke one bowl or less per day, an eighth could last you about a week.

Joints typically contain between 0.5 and 1 gram of cannabis, so you can expect to get 3-5 joints out of an eighth. Blunts are often filled with over a gram of weed, so you may only be able to roll 2-3 blunts using an eighth of cannabis.

Using these numbers, other common quantities of weed will often yield: