Can I Use My Medical Card in Another State?

Nonetheless, not all medically-approved states accept licenses from those who are not permanent residents. In fact, fewer than half of states that allow recreational weed have a reciprocity agreement. However, you can still buy recreational cannabis in these locations if you are over the age of 21.

States with medical marijuana programs have passed legislation through their government to legalize the use of cannabis for medicinal use. These states have unique rules about who can grow, sell, and use medical cannabis.

Each state runs its medical marijuana program independently. Everything regarding cannabis laws is up to them.

In many recreationally legal states, there are still programs exclusive to medical marijuana patients that provide them with access to higher potency products, greater cultivation allowances, and the ability to purchase more cannabis at one time.

Medical patients can also have lower taxes on cannabis products than recreational users. In states where the recreational use of cannabis is legal, the biggest tax is an excise tax. It is usually a percentage of the retail price. And these tax rates will vary depending upon which state you are in.

For example, Nevada imposes a 10 percent excise tax whereas Washington state is a whopping 37 percent.  Some states and localities also impose more taxes on top of the excise tax such as a general sales tax. There can also be an additional cultivator tax that you will see in some states such as Nevada and Colorado. If you have a medical card, you will most often be exempt from a large portion of these taxes.

What is medical cannabis reciprocity? 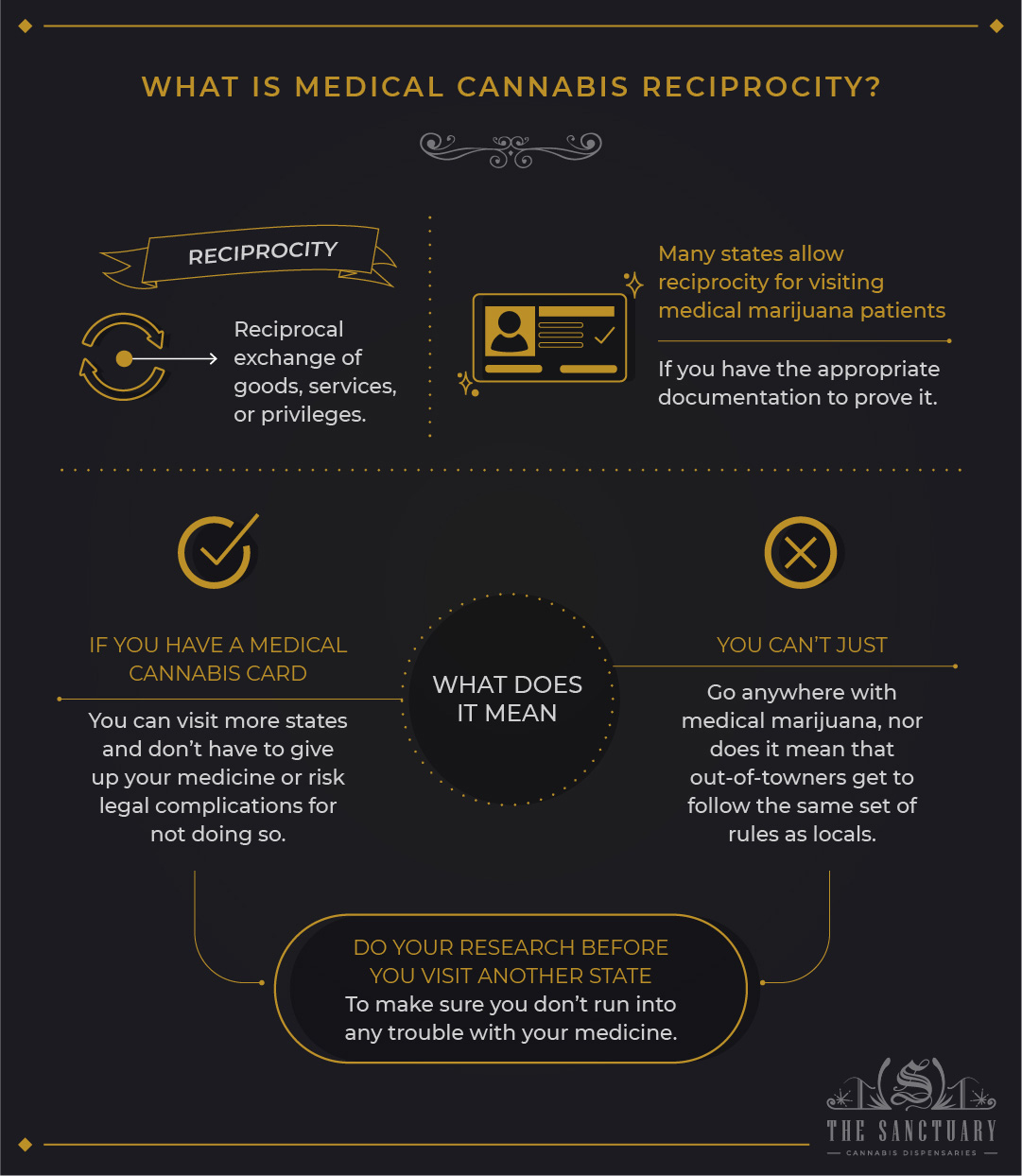 The word “reciprocity” is defined as the reciprocal exchange of goods, services, or privileges. In the world of medical weed, some states allow out-of-state patients the ability to possess and even purchase cannabis. Of course, this is only the case if you have proof of your medical registration. This is usually sufficient with your medical cannabis card.

This does not mean that all states participate in reciprocity. When traveling across state lines it is in your best interest to know the laws that you are entering into. It might be best to play it safe and avoid traveling with cannabis altogether. For medical patients that absolutely need their medicine, staying away from states that still ban weed might be for the best.

States that participate in reciprocity are proud to represent the freedom of choice for thousands of law-abiding Americans. One example was a law that got passed in 2014 in Nevada that allows for the state to recognize medical cannabis recommendations issued in other states, thereby enabling its tourist-driven economy.

Can you get a medical card if you do not live in that state?

The only way to legally obtain a medical card is to be a legal resident of a state where medical marijuana is permitted.

Not all states allow cannabis reciprocity, so it is important to know which do. The states that allow it include:

Arizona has maybe the strictest weed laws in the country. While you are in the state you are able to partake in medical weed consumption just do not smoke all of your stash. You are legally allowed to possess and consume cannabis obtained from the state your card was issued in.

As stated by The Arizona Department of Health Services, however, “a visiting patient is not authorized to obtain marijuana from a dispensary because the dispensary is required in statute to access a verification system before dispensing marijuana.”

You are able to buy cannabis from a dispensary while visiting Arkansas or if you have been a resident for less than 30 days. Arkansas Department of Health states, “from a dispensary with the completion of a visiting patient form and producing evidence of his or her registry identification card or its equivalent.” To abide by Arkansas rules, you must have your medical card in your possession and must not purchase more than 2.5 ounces of weed every 2 weeks.

Qualified patients are allowed to possess cannabis but you cannot purchase it in New Hampshire. You may possess up to 2 ounces which will hopefully last you the duration of your visit.

New Mexico’s reciprocity program began in 2020. Medical patients from other states with an active medical cannabis program are allowed to buy from New Mexico dispensaries.

You technically do not even need to show a medical card as long as you have proof of a doctor’s authorization from your state. This program allows patients to have up to 8 ounces in 3 months. Also, cardholders from out-of-state can purchase weed for conditions that do not even qualify in New Mexico.

Cardholders who live elsewhere can purchase and possess weed in Oklahoma as long as they first complete a temporary patient application. These are valid for 30 days, however, if they exceed the expiration date of the patient’s state-issued medical card then they are not eligible.

A temporary patient license can be renewed after 30 days and will cost $100.

Only legal guardians of patients under the age of 18 can purchase cannabis in Pennsylvania. It must explicitly be used only for the minor’s medical needs.

Back in 2018 Rhode Island dispensaries began selling to out-of-state medical cannabis cardholders. Their procedures are quite simple to follow; you need to show two forms of government identification, and your card must be registered in a state that that has a sale tracking database. Visitors with medical cards can possess up to 2.5 ounces of weed every 15 days.

December 2018 Utah was added to the list of medical cannabis states. As it stands, Utah accepts medical cards from out-of-state. The catch is that you must have what they consider to be a qualifying condition in order to partake. Patients can legally possess up to 4 ounces.

Utah residents that have only lived there for 45 days or less can use a card from their previous state. This card only applies for possession so therefore they cannot buy bud from Utah dispensaries.

In the District of Columbia, there is a reciprocity agreement. Out-of-state medical cards are accepted if your home state has a program that is functionally equivalent to the Washington, D.C. program. Patients in DC can possess up to two ounces of cannabis flower.

Unlike many states with programs, however, you must be at least 21 years old to be eligible, rather than 18.

Puerto Rico gets forgotten as a part of America but they too have a stake in encouraging patients to freely use their medicine. Puerto Rico’s medical cannabis industry allows for out-of-state cards in an effort to boost their already strong tourism.