How to Get a Medical Card with No Condition

If you can remember the days where this was just about the only (legal) way to get weed, getting a medical card was a pretty big deal: You could now enter the literal forbidden garden of the dispensaries to refill your ‘prescription’ on the way to your favorite fast food joint.

Thankfully, the times have changed as Bob Dylan said they would, and recreational use is all over the country. It may feel like the cop-out way to get your Mary Jane, but if recreational use is out of the question, there is almost always the option for medical cards.

How Do I Get a Medical Card?

Having a medical condition: it is in the name, after all. Depending on the condition that you have, you may be automatically qualified for a card upon your evaluation. Should you not have any of your state’s specified conditions, you can still get a medical card in a couple of ways.

It really does depend on the individual, but these variables can range from a lack of medical history due to costs or side effects to your day to day life being severely affected by whatever symptom can be treated by medical marijuana. As far as age, 21 seems to be the universal standard even for medical use but depending on where you are, 18-21 can be the magic number(s) with emancipators being eligible if they qualify as single parents.

What Does it Usually Cost?

You can either renew your card annually or every couple years; the card would cost about $150 a year for registration but this fee can be as low as $75 a year if you qualify for reductions or pricing assistance. However, renewing for multiple years will also reduce annual cost, so that is something to consider.

Also, you will most likely have to pay for that initial screening or consultation, which could range anywhere from from $80 to $200: All together, about $200 by our most conservative estimates.

What Else Qualifies for a Medical Card? 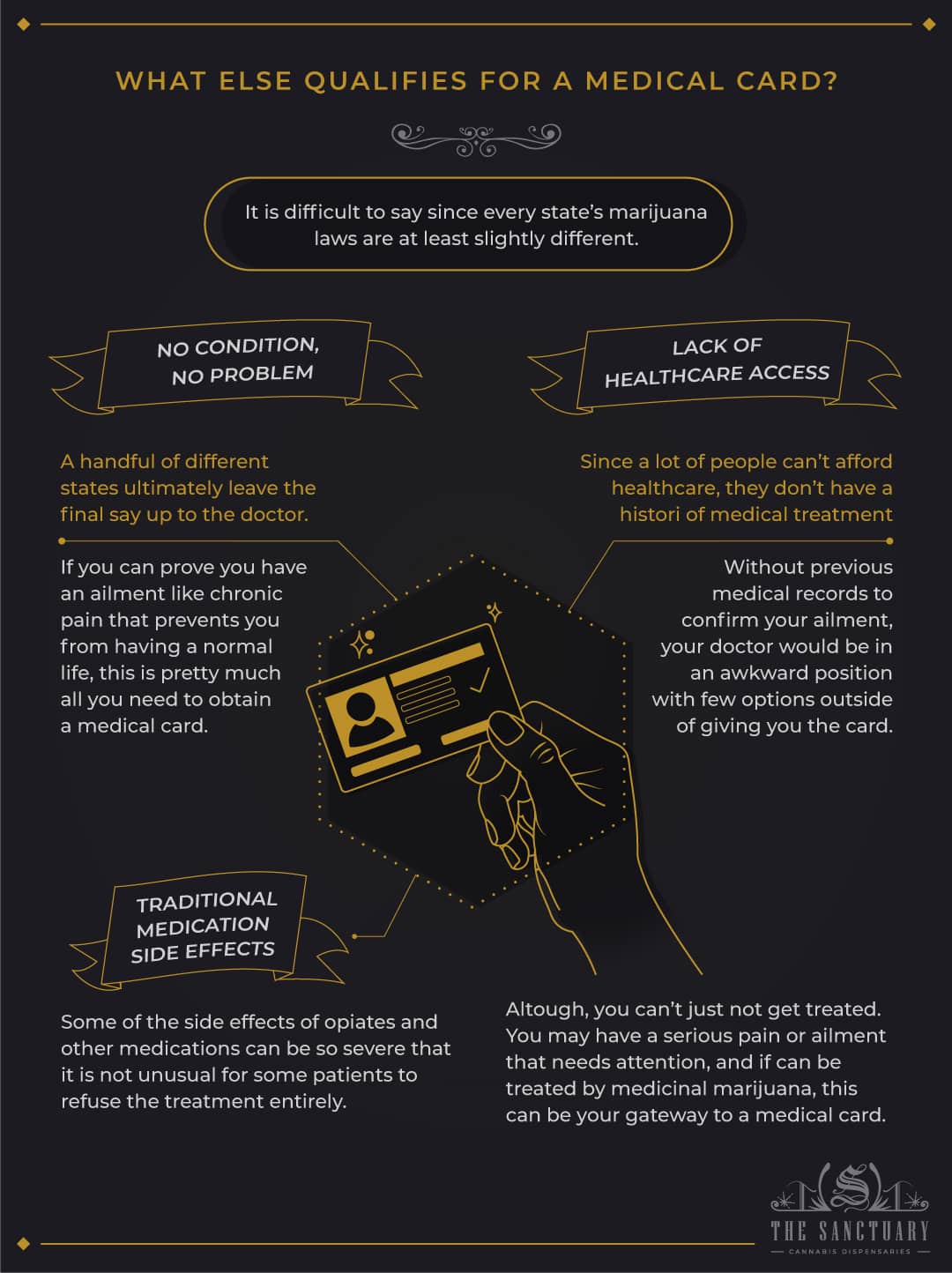 It is difficult to say since every state’s marijuana laws are at least slightly different, but in states like California, you probably do not need a specific condition to get a medical card. General allergies or severe reactions to standard medications, while not technically a medical condition, can still qualify for a medical marijuana card.

No Condition, No Problem

A handful of different states ultimately leave the final say up to the doctor to decide whether or not the patients would get the card. Because of this, it is technically possible to get the card without actually having a medical condition.

However, because those screenings are unavoidable no matter what, you need to know exactly why you need the medical card before you get it.

For example, chronic pain, like having a sore back, is not a condition in and of itself, just a symptom of many. But, it is something that affects thousands, if not millions of Americans every single day and just so happens to be treatable by medical marijuana.

If you can prove you have an ailment such as chronic pain that is so severe that it prevents you from having a normal life, this is pretty much all you need to obtain a medical card.

In the United States, specifically, what is the number one reason people do not go to the hospital even if they are clearly sick or injured? Because healthcare is expensive. It is an unfortunate but nonetheless true reality for many people without a history of medical treatment or evidence of the condition they may currently have.

In other words, without previous medical records to confirm your ailment, your doctor would be in an awkward position with few options outside of giving you the card. The ethics of this approach may sound questionable, but you do not have to be embarrassed to tell your doctor that you grew up with holistic medicine, or genuinely could not afford health insurance for most of your life, which again, is a very real scenario for more people than you will ever meet.

Similar to a general lack of healthcare access, you can make the case of having severe reactions to traditional medications. Some of the side effects of opiates and other medications can be so severe that it is not unusual for some patients to refuse the treatment entirely.

But you can’t just not get treated, right? You may have a serious pain or ailment that needs attention (though immediate medical attention should always warrant a 911 call), and if can be treated by medicinal marijuana, this can be your gateway to a medical card.

In any case, it is always best to talk to a marijuana doctor, or at least one who is familiar enough with the medicine to know how it would benefit you specifically.

Does My Insurance Cover Marijuana?

Medical marijuana is not covered by health insurance as it is not yet fully recognized as a medicine. For obvious reasons, no insurance company in the country can pay for something that is technically illegal, as marijuana is not even federally legal across every state.

The age-old question knowing this is, “Well, if it is legal for medical and recreational use where I live, why can’t my insurance cover it?” Because on a federal level, marijuana is still considered a Schedule I drug (controlled substances) which healthcare providers cannot prescribe without extensive approval from the DEA, failure of which would result in loss of practice.

You are likely aware of how long we have waited just for marijuana to be legalized the way it is now, so full FDA-approval and congressional action to have it covered by insurance could take years at the least, and decades at the most.

Insurance may not cover the actual plant for medical use, but it will cover FDA-approved prescriptions that contain synthetic marijuana. Case in point: Marinol. Interestingly enough, Marinol is actually covered by most health insurance plans and its prescription can be filled for about a $20 copay (some are $10 and some are $30, with this being an approximate average).

You may have to jump through hoops and hurdles to get your medical marijuana (even if it is synthetic), but it does not mean you cannot get it at all, so long as you know why you need it.