Why Does Music Sound Better High

If you’ve ever consumed weed during a concert, you know that music is better while you’re high. Music is fantastic on its own, but with a little THC in your system, you could find new aural layers or meanings in lyrics you hadn’t noticed before, and tunes you’ve heard a thousand times suddenly sound fresh again.

Whether you favor chilled-out reggae beats or harder-sounding music, most people would agree that music sounds amazing while you’re high. However, determining why music sounds better stoned is far from straightforward.

Music and the brain

Comprehending how music affects the brain is the first step in understanding the link between music and weed. Sound is processed from the spinal cord to the cortex, according to Michael Thaut, a professor of music and neurology at the University of Toronto. This indicates that when we listen to music, the whole spectrum of the central nervous system is active.

“From a physiological standpoint, the brain is on fire when it listens to music,” Thaut adds. “That’s significant since there’s pitch, rhythm, harmony, and timbre to consider. When you listen to music, your brain performs a tremendous amount of effort.”

“It improves current attention, prevents memory seeking, and helps you to concentrate on music to make it appear more fresh and intriguing,” he explains. “By interfering with the creation of short-term memories, the listener may concentrate on the current moment rather than exploring the memory for the next event.”

The brain accesses previous knowledge and utilizes it to anticipate what will happen next while creating memories. Because cannabis is known to impair short-term memory, the connection between expectations and the actual experience tends to deteriorate. Under the effect, this prevented the creation of short-term memory, which makes the listening experience feel revelatory.

The brain’s reaction to cannabis is also broad. Cannabinoid receptors are among the most prominent receptors in the central nervous system, according to Zachary Walsh, a psychologist at the University of British Columbia. Under the effect of cannabis, “CB1” receptors become hyperactive, affecting mood, hunger, and sensation.

He explains, “There are undoubtedly a lot in the hippocampus and limbic system, which is connected with emotion and memory.” The problem with music and cannabis studies is that the reported experiences are frequently personal, subjective, and very variable. 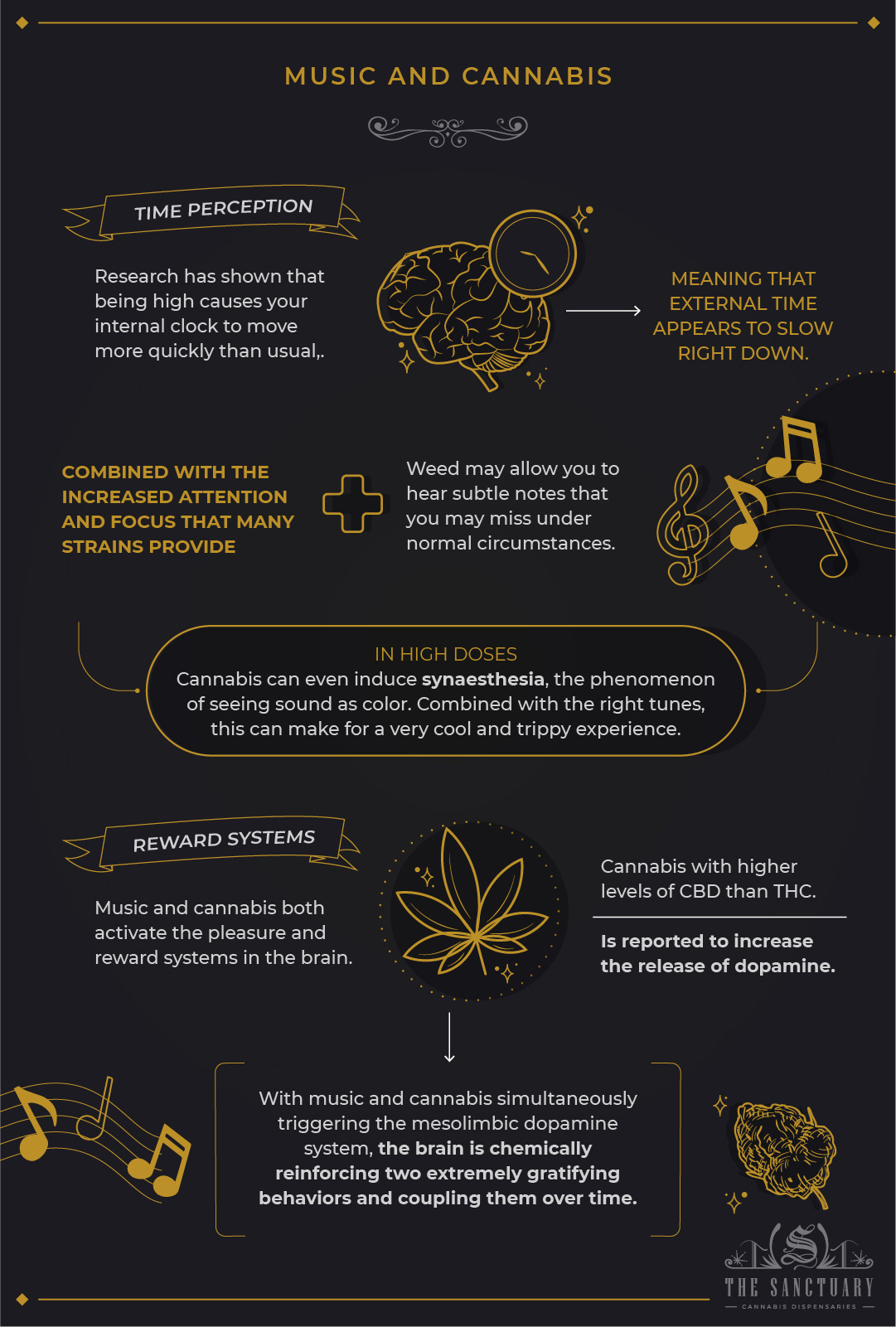 The link between cannabis and sound has been the subject of several hypotheses. Weed has a reputation for changing one’s perspective of time. According to studies, being high causes your internal clock to tick faster than usual, making external time appear to slow down.

Weed may help you to hear tiny sounds that you may miss under normal conditions when this effect is paired with the enhanced concentration and focus that many strains give. It’s also possible that being high will allow you to focus more intently on the music rather than allowing it to wash over you as you finish other activities.

Cannabis can also cause synaesthesia, the phenomenon of perceiving sound as color, in large dosages. This may create a really amazing and psychedelic experience when combined with the proper music.

When we consider that both music and cannabis engage the brain’s pleasure and reward circuits, the link between the two becomes even more complicated. Cannabis rich in cannabidiol (CBD, non-psychoactive) rather than tetrahydrocannabinol (THC, psychoactive) has been shown to enhance dopamine release.

The increased activity in the reward system in such strains might mentally teach the consumer to associate cannabis with a more pleasant listening experience. When music and cannabis both activate the mesolimbic dopamine system at the same moment, the brain is chemically rewarding two very pleasurable activities and tying them together over time.

Cannabis alters our perception of time as well as the rate at which our internal clock ticks. This may offer the listener a more acute auditory sense when listening to music, allowing them to experience songs in greater depth since they have “more time” to consider what they are hearing.

It’s not a hallucination to believe that while you’re high, time flows a bit slower. Cannabis puts the listener in a state of mind that alters their perception of time and their ability to follow a rhythm, altering the way the musical composition comes together.

Acoustic information is time-based, according to Michael Thaut. “Vibrating bodies are the foundation of sound. A violin’s strings, a piano’s strings, and so on. Because everything is time-based, the auditory system that processes music must be exceptionally adept at understanding time. Is it 440 or 450 times per second when a string vibrates? The type of note we hear changes as a result of this.”

This might explain why people who are inebriated are more likely to try to decipher complicated recordings. Time intervals can extend during the course of the high if short-term memory is impaired. Listeners get the sense of receiving more musical information as time passes more slowly. Cannabis appears to convince the listener that they have a better capacity to distinguish musical sounds.

Cannabis’ relationship with freeform, improvisational genres like jazz and blues now makes sense; nevertheless, this improved interconnectedness between notes may equally be applied to a mainstream listener’s taste profile, altering the intricacy of music one can endure.

Variations in internal time, according to user accounts, can shift our attentional focus, allowing for changes in aural perception.

According to Jorg Fachner, a professor of music, health, and the brain at Anglia Ruskin University in the United Kingdom, “when your time perception changes, your center of attention changes. So when you put on a stereo headset you might have an enhanced ability to select certain information and disregard other information, which could help distinguish the individual sounds a bit more intensively.”

This increased attentional focus to see “the space between the notes,” according to Fachner, results in music that is viewed as “much more alive, much more clean, and much more distinct.” The neural roots of these anecdotal alterations in perception have also been discovered.

Fachner published research in 2002 that looked at the relationship between cannabis use, music perception, and changes in brainwave activity. Fachner initially examined the subject’s brainwave activity when sober and with and without music using an electroencephalogram (EEG), a technology capable of detecting tiny changes in electrical activity throughout the brain.

The studies were done in the comfort of a living room to eliminate behavioral biases that may result from an unnatural laboratory environment. Three songs were chosen for the performance, including ensemble chamber music, folk-punk, and a Beatles cover. Participants smoked cannabis with 20mg of THC and listened to the same music while their brainwave activity was measured after a 30-minute rest time.

The findings showed that cannabis users who listened to music had alterations in their parietal, right temporal, and left occipital cortices (brain areas that have previously been associated with attentional strategy, auditory processing, and spatial processing, respectively).

The parietal (attentional strategy) cortex, in particular, showed increased activity in the alpha frequency range. Interestingly, prior EEG research has revealed that talented math students exhibit comparable increases in alpha rhythms in this brain region while solving problems, implying that this activity pattern may be indicative of more efficient information processing than the ordinary individual.

“One of the conclusions I came to from this data was that when it came to attention, respondents were focused a little more on the sound, and this concentration needed less mental energy,” says Fachner. “As a result, it is simpler to listen, focus, and relax.”

In addition, music-listening participants who were high on cannabis showed increased activity in the right temporal brain area. Because this region is largely responsible for processing auditory information, our findings suggest that changed music perception might be due to a shift in the neural processing approach.

Weed usage is commonly associated with the creative process for many musical artists, both past and present, from Bob Marley to The Beatles and Brian Wilson to Snoop Dogg.

This refers to the idea that, while many musicians produce music while under the influence, listeners can also have a stronger connection to the music because of their own altered mental state, picking up and appreciating tiny subtleties that would otherwise go unnoticed by the ordinary listener.

During his lifetime, famed scientist Carl Sagan famously advocated the benefits of mixing cannabis with music. He stated how the shift in his mindset helped him to hear music differently and comprehend elements of music theory he previously struggled with, such as counterpoint and harmony.