What strains, or components of strain, increase libido when smoking? We may have that answer already, so we are going to break down what it is that gives these strains that special ability.

Is Arousal Normal when Smoking? 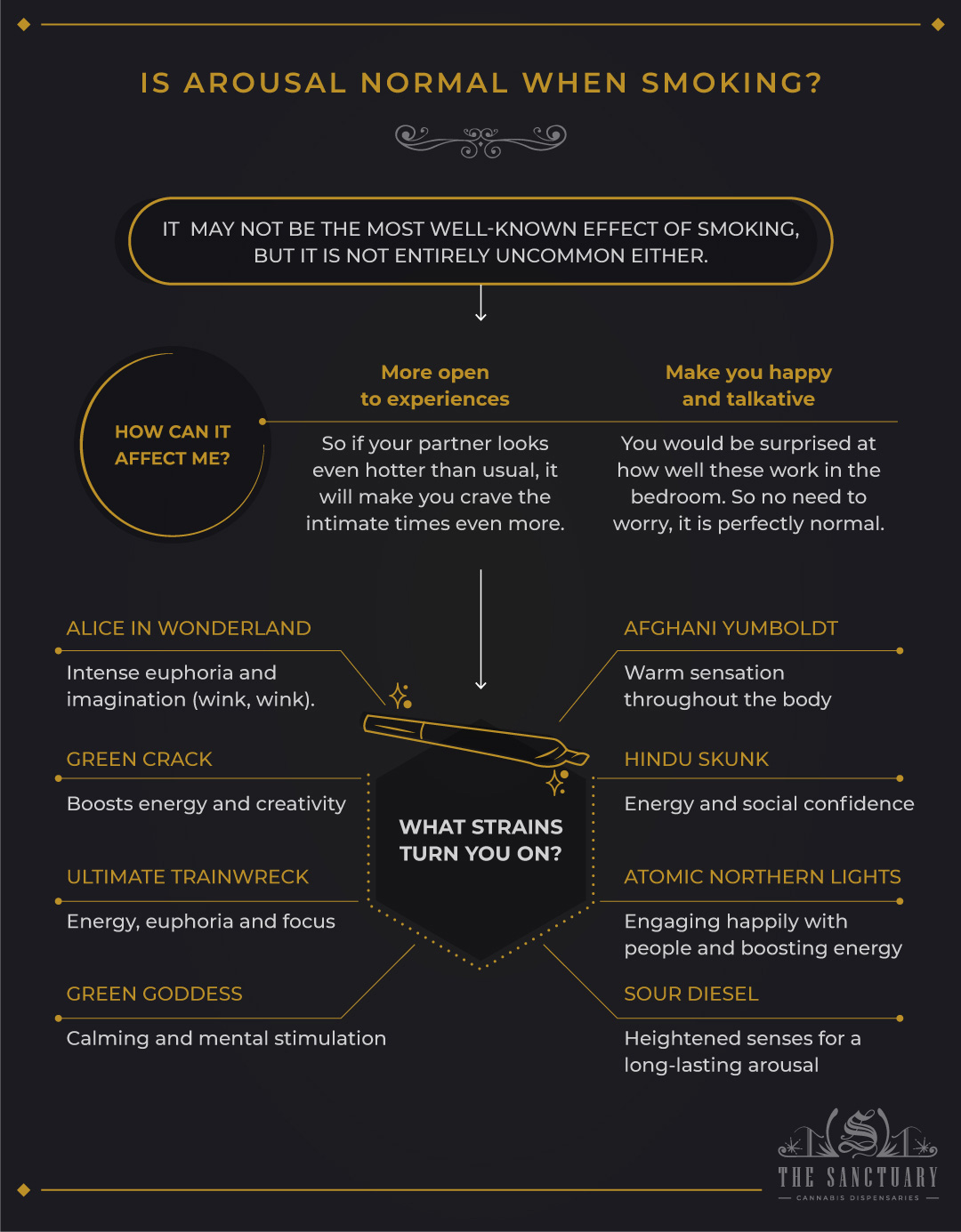 For example, one of the most well known parts of the high is being more open to experiences (like making art). So if your partner looks even hotter than usual, that feeling is even more elevated if you’re high which will make you crave the intimate times even more.

A lot of popular strains do mellow you out and make you feel happy and talkative, but you would be surprised at how well these work in the bedroom. So no need to worry if you experience effects closer to an aphrodisiac, it is perfectly normal.

What Strains Turn You On?

In our article from July 2021 on the best strains for arousal, which we highly recommend, we found the top 8 strains for this and how they give you a better experience in bed.

These strains include (but are not limited to):

Notice the pattern on each of these strains in that every single one makes you feel ‘good’ in some capacity, but ends up being good news for you and your partner. It is not so much that THC targets the specific part of your brain that makes you aroused, but it does elevate the sensations of the intimate times (in most cases).

Despite the popular misconception, weed is not (necessarily) a hallucinogen. In rare cases, there can be something to behold in terms of hallucinations outside of dreams. However, weed is more of a tactical psychoactive that works by elevating senses, making you more sensitive to touch, taste and perception.

In Men vs. Women

It is not often that studies behind the effects of cannabis use differentiate between the sexes, but there may actually be a difference of this effect between men and women. Across the board, men have reported to smoke weed a bit more often than women, but the decrease in women’s sexual dysfunction was a slighlty greater than in men.

As far as the effects on sex drive between men and women, the results are pretty neck and neck despite women being less likely to experience dysfunction after smoking.

What is one of the main compounds increasingly released when smoking weed? Dopamine. What is released (from your brain) when you achieve orgasm? Also dopamine. So what happens when you put the two together? A hell of a lot of dopamine.

We cannot guarantee at all that this will be the best night you ever have with your partner (there is still a chance your weed could have the opposite effect), but a euphoric high combined with you and your partner being drawn to each other can create an experience to remember, if you remember it the next morning.

Without getting into the NSFW territory, weed does increase the intensity of certain feelings (as we discussed), so whatever feelings you have during sex are essentially dialed to 11. More accurately, 45% of participants in Dr. Becky Lynn’s study found that orgasms were more intense after smoking weed, but no noticeable changes in performance were reported.

In short: Weed does not (necessarily) make you better at intercourse, but it makes it feel better.

Interestingly, a 2018 study concluded that weed smokers hooked up more often over the course of 30 days, compared to a group who abstained from weed over the same timeframe. Humans have a natural desire for intercourse to begin with, dopamine plays a big part in this, which is likely why people want it more when they smoke weed, because that leaves you wanting more of what makes you enjoy or makes you feel good.

Side Effects of Weed and Sex

We are all adults here, so let’s just get it out of the way: Premature ejaculation.

The most noteworthy side effect of using weed for sex is the green stuff working a little too well. That heightened sense of pleasure and arousal, especially for men, can result in the user being overstimulated to where they climax earlier than anticipated. On the opposite side, some men have reported that smoking before they were in the mood resulted in trouble functioning.

This makes sense when you remember that cannabis has been linked to lower blood pressure, and blood needs to rush to that area for you to have a good time with your partner, so if your whole body is calmed and relaxed to where that is not up to speed, dysfunction ensues.

How often do they occur?

Because weed’s side effects in general tend to lessen overtime (if chronic users start to build their tolerance), these side effects occur more often to first-time or inexperienced consumers. That is not to say that any consumers are immune to any side effects, but your own rate of consumption will determine if they are mild to severe.