By The Sanctuary Editorial TeamLast updated on April 24, 2021No Comments

Today, cannabis is becoming more widely accepted and used, with tons of questions still surrounding its effects on our bodies. As we know, cannabis is most often cited for its psychoactive properties and the intoxicated feeling most users experience after ingesting.

If you are new to the world of weed, you might be curious about how people feel when they are high on cannabis. Cannabis is a unique drug with unique effects and without trying it you may never realize what being high means. However, there is plenty of information to give new users a general idea of what to expect.

As for answering the question:

There is no specific answer because your experience will be completely different from that of the person next to you due to countless reasons.

Why does weed make people high?

The active ingredient in cannabis that gets people high is THC (delta-9-tetrahydrocannabinol). THC produces the high when a person smokes, ingests, or vapes it. It enters the bloodstream and makes its way to the brain. It then attaches to receptors in the brain, which causes the high to occur in most people.

THC also slows down communication between the brain and the rest of the body, which gives cannabis its calming effect. Eventually, THC is broken down and excreted in urine and stool.

Cannabis users often promote the positive effects of being high. These sensations can include:

Factors that affect a cannabis high 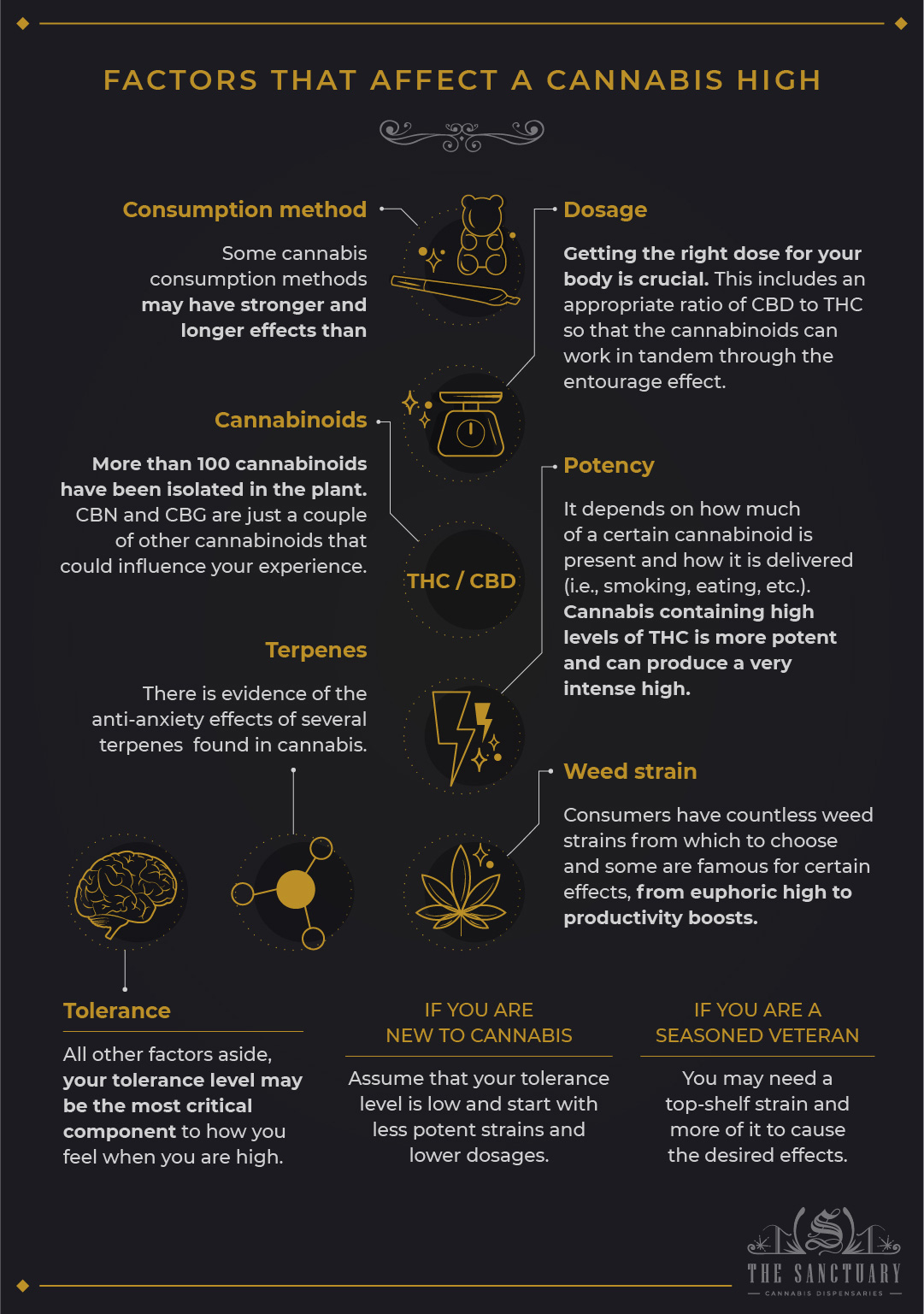 Cannabis affects each person differently. Some people are very sensitive to weed’s effects, while others might not notice them as much.

How you react to weed depends on several factors, including:

How different strains affect your high

Strains are different breeds of the cannabis plant. There are three main strains of cannabis: indica, sativa, and hybrids.

Users associate indica strains with physical effects such as relaxation, while sativa strains are believed to produce a more active, mental high. Hybrid strains are thought to combine the effects of both indica and sativa strains. However, these differences in the high are not scientifically proven. Also, some researchers believe they are unfounded.

According to a 2016 interview with Dr. Ethan Russo, an expert on the human endocannabinoid system, “One cannot in any way currently guess the biochemical content of a given cannabis plant-based on its height, branching, or leaf morphology.”

He also stated that: “The differences in observed effects of cannabis are then due to their terpenoid content.” Terpenoids are a substantial group of organic compounds found in plants. They can have a wide variety of effects on humans.

What does it feel like to be high on edibles?

Edibles are cannabis-based food products. They come in many different forms, from gummies to brownies, and contain either one or both of weed’s active ingredients, THC and CBD (cannabidiol).

Ingesting cannabis, whether in tinctures, sprays, or food and drink, leads to a different high than smoking. The high can feel more intense, and it may last longer. The onset is slower than smoking as THC is released into the bloodstream over a longer period.

It can take between 30-90 minutes before you start to feel the effects of weed edibles. Edible highs can last up to about 6 hours or until you wake up the next day.

Vaping cannabis is different from smoking it. When you vape, you are inhaling vapor instead of smoke. Vaping releases higher concentrations of weed’s active ingredients than other methods. As a result, vaping can produce a stronger high.

As with smoking, you should feel the effects of vaping right away. These effects can last up to 4 hours. Results from a 2018 study indicated that vaporizing cannabis produced higher blood THC concentrations and stronger effects than smoking the same amount.

Both THC and CBD naturally occur in cannabis plants. CBD can be isolated from the cannabis plant and the THC compound. People infuse CBD into tinctures, oils, edibles, and other products without the high-inducing THC. Still, many individuals might assume CBD causes the same effects as THC because both can be found in the same plant. However, CBD alone is non-intoxicating, meaning it will not cause a high.

They both have an impact on cannabinoid type 1 (CB1) receptors in the brain. However, the type of impact tells you a lot about why they produce such different results. THC activates these receptors. This causes euphoria or the high associated with cannabis.

CBD, on the other hand, is a CB1 antagonist. It blocks any intoxicating impact caused by the CB1 receptors. Taking CBD with THC may inhibit the effects of THC.

How long does a weed high last?

Several factors determine the answer to this question, but the primary factor in the duration of a cannabis high is the method of cannabis consumption. The high you get from eating an edible is going to last much longer than the high you get from a few puffs of a joint.

That is because the length of the high reflects the amount of time it takes for the THC to reach peak saturation in your bloodstream and then get expunged from your system.

When smoking cannabis, the onset of the high is nearly immediate. THC levels peak within the first 30 minutes to an hour after inhalation, according to both anecdotal evidence and a 2011 study published in the Journal of Addiction Medicine. The high from smoked weed can last up to several hours, though the intensity will generally decrease after the first hour or so.

When using concentrates, the onset of effects is nearly immediate, but the duration depends largely on individual tolerance. Those who dab high-THC concentrates regularly may feel the effects wearing off within 1-3 hours, while someone entirely new to concentrates may be feeling the effects all day.

Your biological makeup, along with the chemical makeup of the cannabis you are consuming, will determine how long a cannabis high and any potential side effects will last. 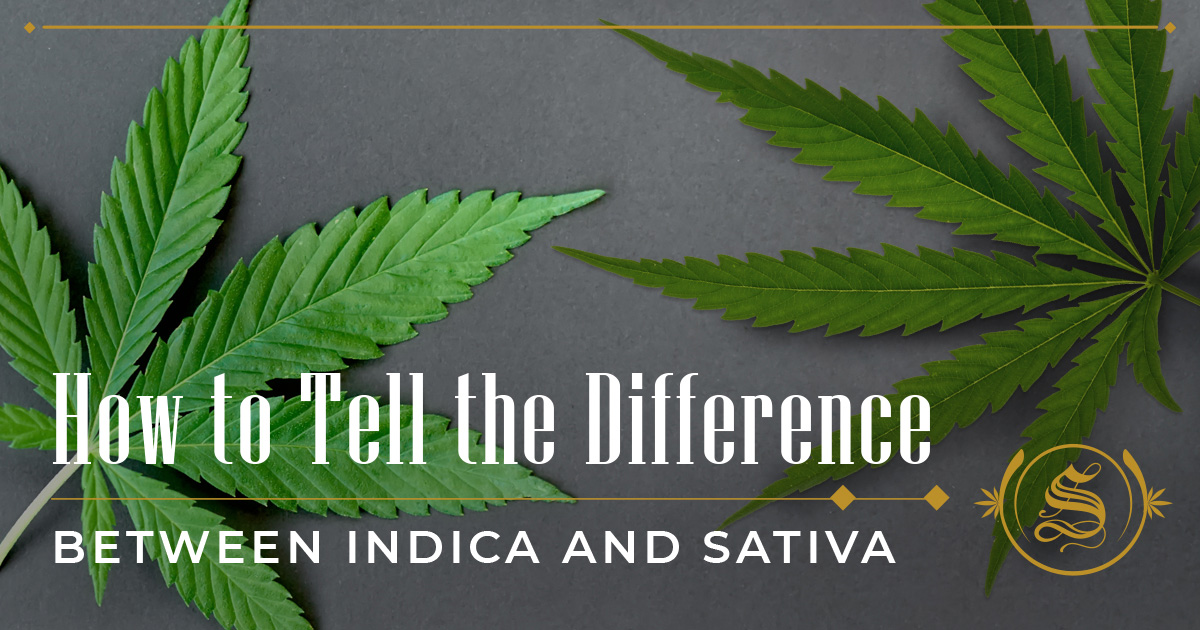 How to Tell the Difference Between Indica and Sativa 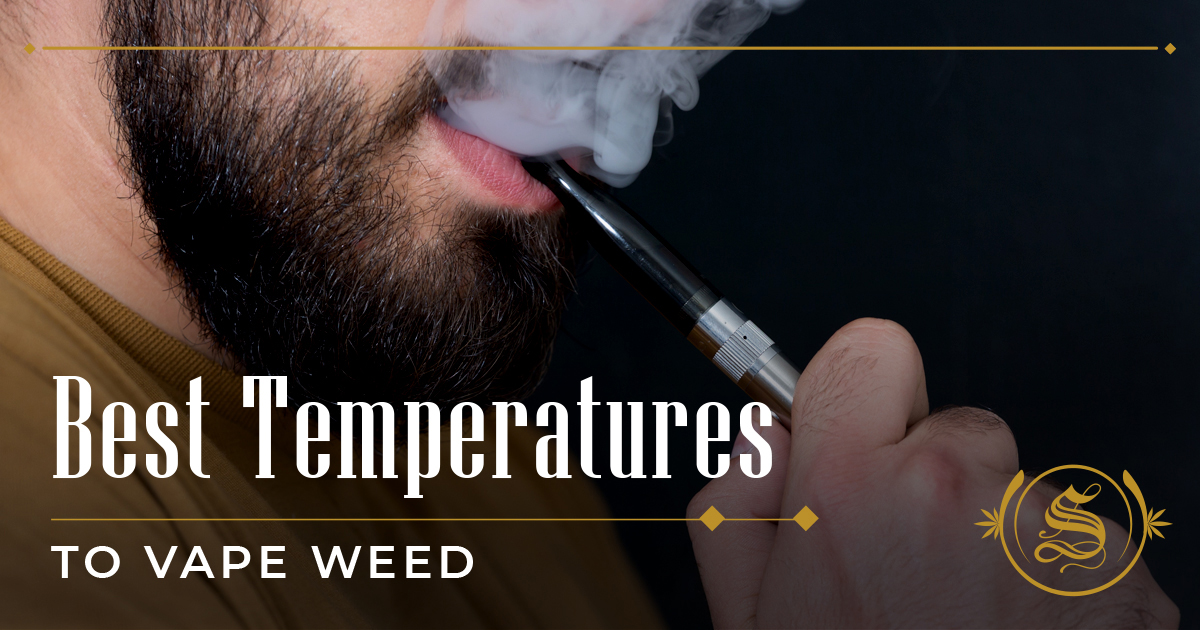