Why Was Marijuana Illegal?

Since 2016, commonly referred to as the biggest legalization year in history, it has no longer been unusual to simply walk into a dispensary in the heart of downtown, buy some weed and walk out of the store without even showing a medical card.

It is hard to put into words how radically different this scenario is compared to buying marijuana when it was first introduced to the United States. As more of the United States continues bills and legalization in favor of cannabis, why it was outlawed in the first place cannot be overlooked. But the question is: If marijuana is being legalized all across the country and proven to be far from the deadliest substance known to man, why was it illegal in the first place?

Marijuana technically came to the country illegally and that did not help the case. So, smuggling combined with completely unknown side effects at the time and no way for it to be properly taxed lead to nationwide prohibition shortly after it arrived.

Marijuana in The United States

Again, marijuana is common in America and most of the developed world nowadays. Even writing this blog is a testament and homage to the cannabis culture that you have built as consumers and is now celebrated by millions across the world.

However, marijuana has a dark and tumultuous history in the United States before it was popularized in music, entertainment and memes before being legalized. Its history crowded in propaganda, mystery and drug wars as it struggled to gain recognition as the breakthrough in medicine it is today.

How Did it Get Here?

The plant may have originated in Central Asia, but its story in the United States began when hemp was used to produce a variety of goods during Colonial times. This may sound crazy but the U.S. government actually approved hemp production for things like sails and ropes until the end of the Civil War gave way for trade and imports.

It would not be for another two centuries before consumption of marijuana was popularized, when refugees of the Mexican Revolution fled the war-torn country in the 1910s and brought it to the United States: The country’s first recorded instance of recreational use.

Why Was Weed Illegal?

The anti-drug stigma that would outlaw marijuana was not as prevalent in the 18th century. But, when Mexico’s refugees started using marijuana recreationally, fear and prejudice overtook its public perception and it barely took 20 years for it to be outlawed in nearly 60% of the country.

From there, it was only a matter of time (actually about a decade) for it to be federally illegal and made taboo until its first medical legalization over half a century later.

When the equipment and resources are scarce, one weapon has proved to be as powerful as the war machine, and that is the court of public opinion. Propaganda helped illegalize marijuana for all the wrong reasons. Racism against Mexicans immigrants fueled hatred for their communities and marijuana alike as political campaigns in nearly every part of the country had blamed immigrants for bringing illegal drugs and worsening the Great Depression.

The 60s would bring the most notable, pre-legalization shift in climate for marijuana as campaigns for decriminalizing had been brought to the mainstream, but shunned almost entirely in the following two decades.

Known (or Unknown Side Effects)

But it was not all smoke and mirrors that drove marijuana to become illegal in the U.S. A big part of the issue also came down to what we knew and did not know about the side effects. As we know now, marijuana is a medical innovation and its worst side effects are prwhy was marijuana made illegaletty much exclusive to its most chronic users (no pun intended), while its short term side effects include:

All of which are common but none of which lead to any long-term damage, not even to your lungs. To be fair, only years of research and published scientific articles proved this, which would not have been possible under strict marijuana crime laws. Only by lifting these restrictions did it become more socially acceptable to get the funding for these studies.

While anti-drug and immigration campaigns would create negative stigma surrounding marijuana, 1937 would bring what would have been the final nail in the coffin, had it not been for the push for medical research. The Tax Act of 1937 had placed new taxes on every sale of marijuana and imposed sanctions for possessing it.

The ‘War on Drugs’

Nearly 40 years after the Tax Act, marijuana was still federally outlawed while being socially taboo outside of rebellious teens, young adults and ‘early enthusiasts’ a.k.a. hippies. Legalization would eventually come to the U.S. but it was in 1971, with the Nixon administration, that the War on Drugs was officially declared, only furthering the disconnect between consumers and the general public.

The 70s may have helped to elevate weed culture, but at the same time, it did not help that those in power were vehemently anti-marijuana under motivation of prejudice and political gain. As a result, marijuana propaganda is doubled-down and small crimes we now see as misdemeanors were punished far more harshly.

When was the turn around? 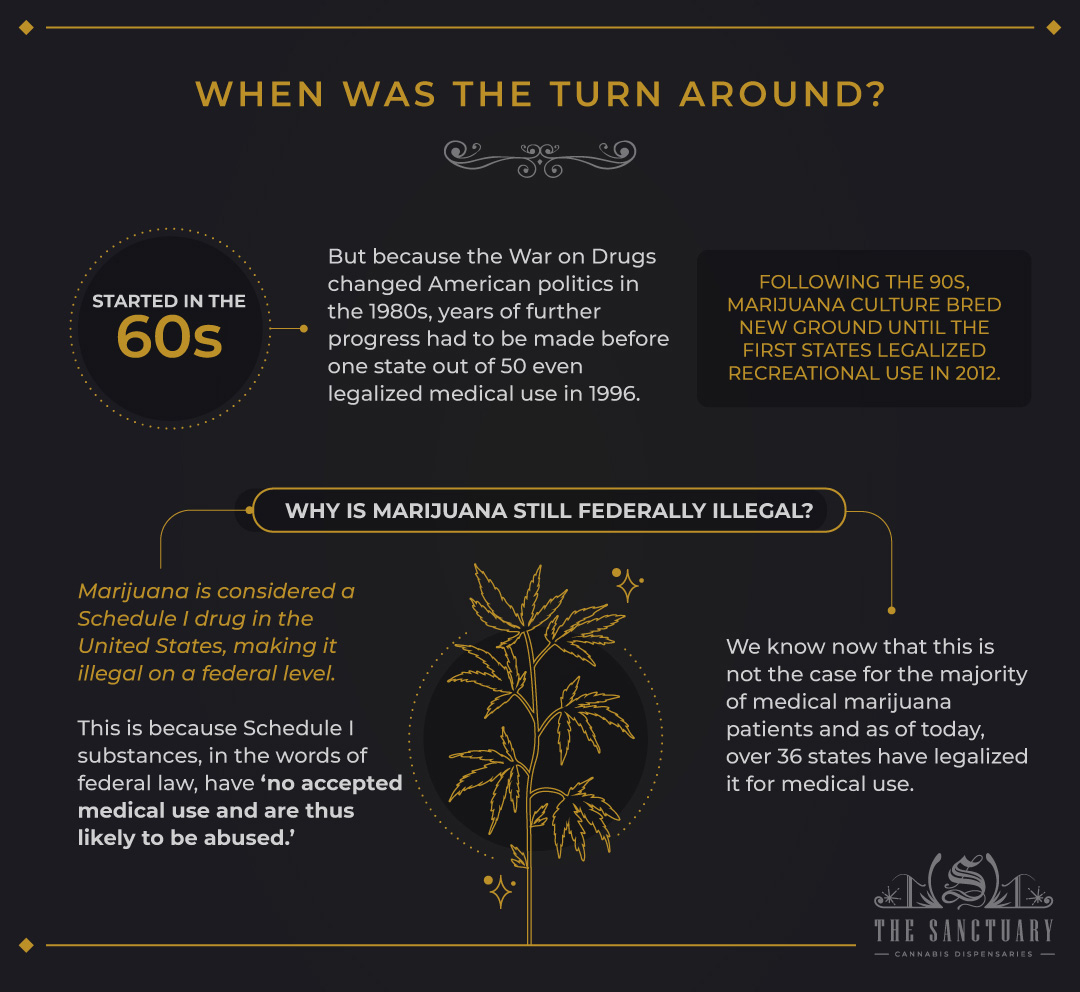 This turnaround for the public’s perception of marijuana has moments of social acceptance and obviously the legal acceptance in legalizing recreational use.

We mentioned the shift in climate in the 60s, which admittedly kicked it off, but because the War on Drugs changed American politics in the 1980s, years of further progress had to be made before one state out of 50 even legalized medical use in 1996.

The nearly 40-year gap between the hippies and California’s historic legalization was crowded in more anti-drug propaganda, but following the 90s, marijuana culture bred new ground until the first states legalized recreational use in 2012.

Why is marijuana still federally illegal?

Interestingly, the UK in 2022 has a similar stance on illegal marijuana, in that their ‘Class B’ drug classification for marijuana has made it illegal to use or even possess, with potentially serving up to 14 years in prison.

Almost by that same logic, marijuana is considered a Schedule I drug in the United States, making it illegal on a federal level. This is because Schedule I substances, in the words of federal law, have ‘no accepted medical use and are thus likely to be abused.’ We know now that this is not the case for the majority of medical marijuana patients and as of today, over 36 states have legalized it for medical use.