Does Weed Help You Study?

Studying may be monotonous, tedious, or downright unpleasant for many college students and professionals. So, what do you do when you have exams to study for and are feeling very unproductive?

Instead of reaching for another cup of coffee, reach for a joint.

Not everyone can study effectively while high. It is also not advisable to enter a school exam while under the influence of cannabis. If you already know it’s not for you, admitting it and reserving the joint for after you’ve finished studying makes things easier.

There are, however, many students whose study habits might benefit from the careful use of cannabis.

How does cannabis affect your brain?

While cannabis is thought to increase neuronal connections in the brain, the exact link between cannabis usage and rare occurrences of psychosis is still being debated. The Proceedings of the National Academy of Sciences released some of the most recent findings from the University of Texas.

While cannabis appears to physically shrink the brain, it really increases the number of connections between neurons, according to their findings.

They compared 48 adult cannabis users aged 20 to 36 to a control group of non-users as part of their approach. Over the course of 6 to 8 years, MRI scans were used to follow how cannabis users fared after smoking an average of 3 joints each day.

THC appears to be reducing grey matter, according to brain scans. The brain’s orbitofrontal cortex appeared to be particularly sensitive to shrinkage. This might be troublesome since this part of the brain is involved in reward and adversity processing.

The authors of the study concede that it does not take into consideration infrequent users or the consequences of abruptly stopping. If the results of this study reveal that frequent users still have better connectivity, occasional users may benefit from studying while high.

How weed can help you focus

If you hate studying but know you have to, elevating your mood by getting high might be a simple method to get started. Cannabis is well-known for altering one’s mood. This might range from a slight sensation of comfort to full-fledged excitement and elation. Where you land on this spectrum is mostly determined by your state of mind prior to smoking, the type of weed strain you use, and the makeup of your endocannabinoid system.

Cannabis is recognized for its stress-relieving effects in addition to being a mood enhancer. Cannabis users and non-users took the identical Maastricht Acute Stress Test and had their cortisol levels tested before and thereafter in one research. Cannabis users had a reduced sensitivity to stress and their cortisol levels did not rise, suggesting that cannabis usage can reduce our stress responses.

Many cannabinoids found in cannabis (particularly CBG and CBD, but also THC) are neuroprotective. That is, instead of promoting the cellular processes that lead to cell death, they switch on beneficial cellular activities like antioxidation. Cannabis and its derivatives are intriguing candidates as treatments for degenerative brain diseases including Parkinson’s and Alzheimer’s because they are neuroprotective.

In other situations, people with epilepsy who used CBD-rich cannabis had not just a considerable reduction in seizure frequency, but also greater alertness, improved mood, and better sleep as a result.

Is there still any benefit to studying with cannabis if one does not have such conditions or a complete loss of drive to study?

Users may turn to cannabis as a post-study activity. Indica strains are excellent for unwinding and falling asleep. Getting enough sleep is sometimes disregarded as a health concern. A regular sleep pattern is particularly crucial for students. Most individuals need 6-8 hours of sleep every night, so choose a calming strain to help you relax and get ready for bed.

Cons of studying while high 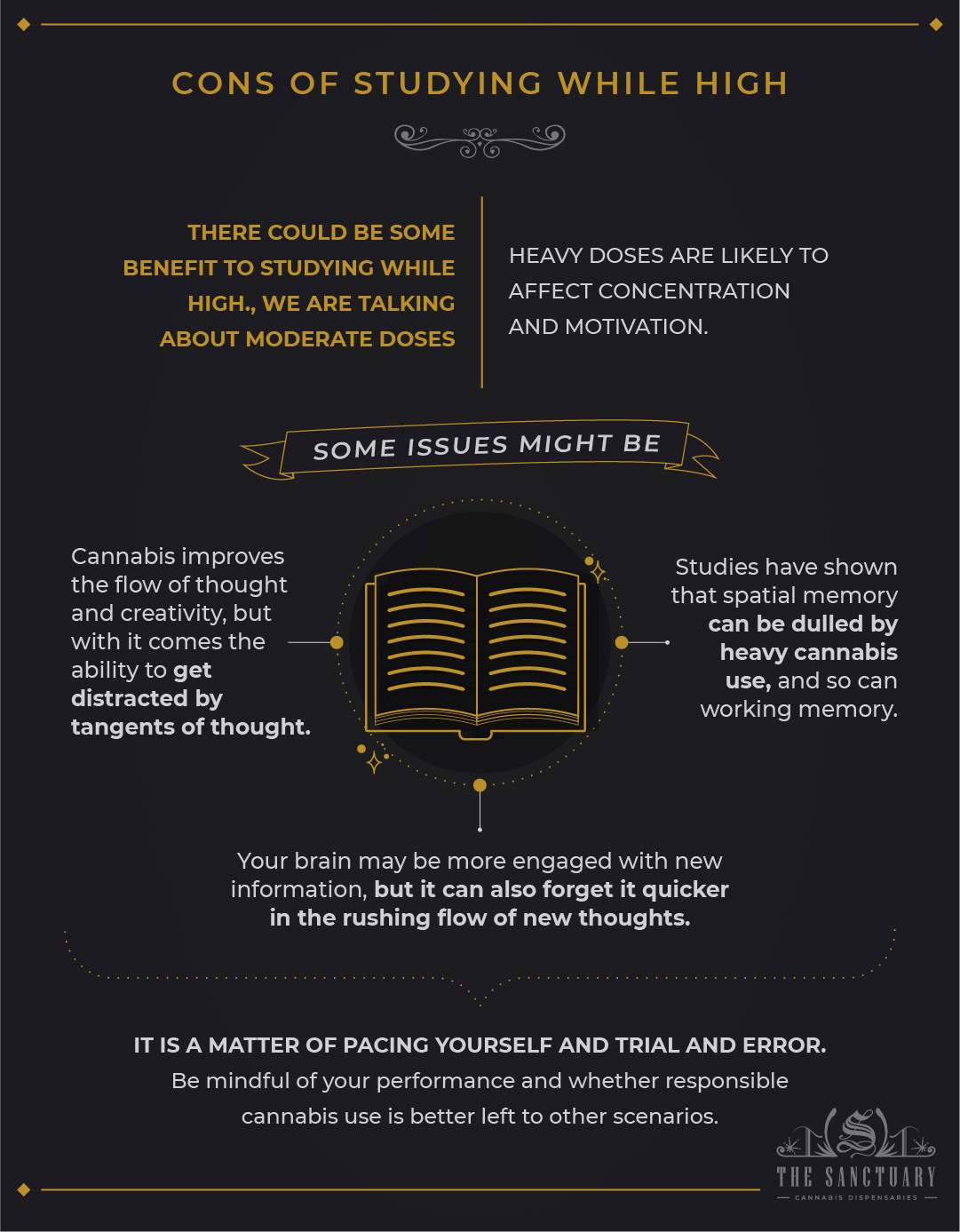 There may be some advantages to studying when high, depending on your cannabis strain and conditions. Of course, we’re talking about modest dosages. Concentration and motivation are likely to be affected by high dosages.

Cannabis may boost the flow of thinking and creativity, but it also increases the likelihood of becoming distracted by tangential thoughts. Memory is harmed when one has such a flexible attitude.

Heavy cannabis usage has been proven to impair spatial memory and working memory in studies. The capacity to process information in real-time is known as working memory. So, if you are studying and attempting to remember important information, you should make very detailed notes on what you need to know. Your brain may be more engaged with new knowledge, but amid the flurry of new ideas, it may also lose it more quickly.

Getting high immediately before digging deep into a topic, on the other hand, may assist one to focus on the train of thought. It’s a matter of trial and error and not overdoing it. Consider your performance and whether appropriate cannabis usage should be reserved for other situations.

Which weed strains are best for productivity?

In general, productivity is linked to having the energy to finish activities, thus choosing a strain that promotes an upbeat mood may be preferable to a strain that induces couch-lock.

Many people assume that sativa strains would improve their alertness and attention. There’s also the entourage effect, which describes how cannabinoids, terpenes, and flavonoids interact to produce a variety of effects ranging from euphoria to relaxation.

Consider how citrus smells energize you while lavender soothes you; the same principle applies to your bud. It’s also important to think about how you will get high, because inhaling cannabis through pipes, vapes, and similar devices will give you a more immediate high, but edibles like gummies will take longer to kick in.

The following weed strains are said to be the greatest for studying:

How much cannabis should I consume for productivity?

Because sativa strains are associated with alertness, it’s easy to feel like you’ve gone too far. You could develop the feeling that you’re too high and can’t get anything done. If that’s the case, taking small hits of weed may be a better approach to get started with cannabis as a productivity enhancer.

If you’re new to microdosing, you might want to stack your dosages, which involves waiting a few minutes between hits to see how each amount affects you. After you have finished your first hit, wait at least 30 minutes before taking another. If you’re taking an edible or tincture, aim for no more than 5 milligrams of THC in each dosage.

Consider skipping concentrates unless you’re a seasoned smoker. Concentrates often contain up to 70 percent THC, and simply one shot is enough to get the casual cannabis user incredibly high.