Holding in Weed Smoke: Does It Get You Higher?

It’s something we’ve all seen in a movie or experienced in our own smoking circles. Someone takes a large drag from a bong, holds their breath for as long as they can, and then exhales the smoke fast as they gasp for oxygen.

Holding your breath allows your lungs more time to absorb the valuable THC, therefore increasing your high. Science has been playing catch-up in gathering evidence for all weed-related misconceptions. Fortunately, science has worked out this problem.

Then why do I feel higher?

Your heart rate gets faster, the more you hold your breath. To compensate for the low oxygen levels, blood is pumped quicker. This is amplified by the fact that you are holding your breath since there is no oxygen available.

The body begins to respond to this new emergency signal. To prepare for a flight-or-fight response, adrenaline is produced, which further adds to the overall “high” experience. The tingling feeling of your skin and face is another indication of oxygen depletion, which is frequently mistakenly connected with becoming higher.

How to inhale weed properly 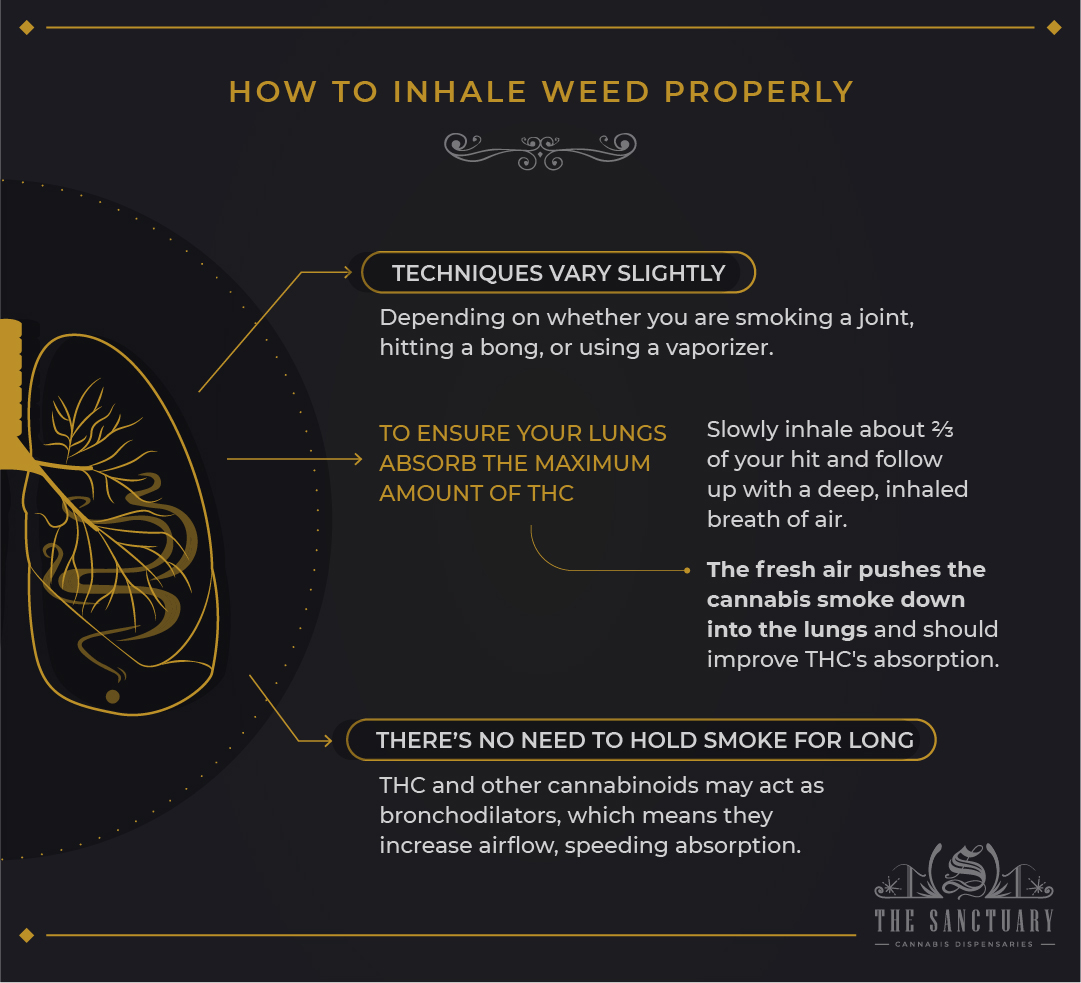 Whether you’re smoking out of a bong, hitting a joint, or using a vape, your techniques for inhalation will differ significantly but they all do roughly the same thing.

When you smoke cannabis, you’re burning it to the point of combustion and breathing the smoke to get cannabinoids into your bloodstream. Smoking might irritate the lungs, therefore, it’s vital to take calm, regulated pulls to avoid discomfort. Begin with small hits and slowly build up to bigger ones the more familiar you get with smoking.

To ensure the greatest amount of THC is absorbed by your lungs, slowly inhale roughly two-thirds of your dose and then take a deep, breath of air. The fresh air drives the cannabis smoke deeper into the lungs, perhaps increasing THC absorption.

According to studies, you don’t need to hold your cannabis smoke for very long. THC and other cannabinoids may function as bronchodilators, increasing ventilation and therefore speeding up absorption.

The manner of ingestion is the most essential consideration when choosing how long to keep your hit in. Because your body absorbs cannabinoids differently based on the mode of ingestion, cannabinoid absorption varies by method.

Examining bioavailability is one approach to explain these discrepancies. Bioavailability refers to the process by which chemicals are absorbed by tissues and organs, or more specifically, how likely cannabis molecules are to get past the gastrointestinal tract’s liver filtering system and subsequently be put to use.

This is also why edibles take so long to take effect. They must first go through a lengthy procedure that takes place throughout the body. However, because smoking weed causes oxidation, cannabinoid absorption is quite high. This is because molecules do not pass through the acidic stomach environment and instead enter the circulation via the lungs.

How long do you need to hold in your hits?

Because the cannabinoids in combusted cannabis are quickly absorbed, holding your dose for too long exposes you to the undesired absorption of tar. In fact, non-cannabinoid components make up around 88 percent of combusted smoke fumes.

Due to its high bioavailability, smoking has a quick impact that lasts only a few seconds, therefore the common consensus is that holding a hit for a few seconds should be enough. It’s a waste of time to keep it any longer. Holding a large hit just creates too much smoke for your lungs to manage, and it has nowhere to go except out.

Vaporized or dabbed cannabis, on the other hand, is cleaner and has fewer non-cannabis components. Holding your hit slightly longer when vaporizing or dabbing will not absorb any more tar or smoke because you are simply consuming vapor. Although each vaporizer and user may adjust the dose, the optimum benefits come from holding your hit for just a few seconds.

Instead of holding it in, inhale deeper

When you inhale a joint or a blunt, your lungs expand to take up oxygen and cannabinoids, which are subsequently transported to your blood vessels. This process of transportation spreads throughout your entire body and is the source of your high.

Consider inhaling your hit more deeply into your lungs instead of holding it for as long as possible. Deeper breathing allows cannabis to reach the blood circulation more easily since it fills the lungs with up to 5 liters of air. Normal breathing, on the other hand, merely fills your lungs with 0.5 liters of air.