How to Decarb Weed

You have probably heard dedicated canna enthusiasts like us talk about decarbing weed to make things like oils or edibles, and you may or may not know what it actually is. In short, decarbing (or decarboxylation) is the act of simply getting your weed to release the cannabinoids you want like CBD or THC.

This may sound like an overly-complicated process but it is actually one of the easiest things you can do without weed besides smoking it. Decarbing is also the most important step when making your edibles or cannabutter as this will literally determine if they will ‘hit’ the way they are supposed to when they are cooked right.

The scientific term, decarboxylation, is the chemical reaction where compounds called carboxyl groups are removed from their molecules. These carboxyl groups in weed are essentially acids that keep their molecules from binding to the cannabinoid receptors in the brain, and decarbing it will have them removed.

Decarbing weed allows for the brain to receive what will now become CBD or THC molecules, giving us the full effects of the plant. This is exactly what we mean when we say decarbing is ‘activating raw weed’: Altering the chemical structure of the plant using heat so that it becomes more potent and usable in a variety of ways.

Why Should I Do It?

In its most raw form, like if you brought your weed home straight from the dispensary, the cannabinoids you want for that medicinal or euphoric effect (CBD or THC, respectively) do not exist in a meaningful quantity because they have not been released yet.

How to Decarb Weed 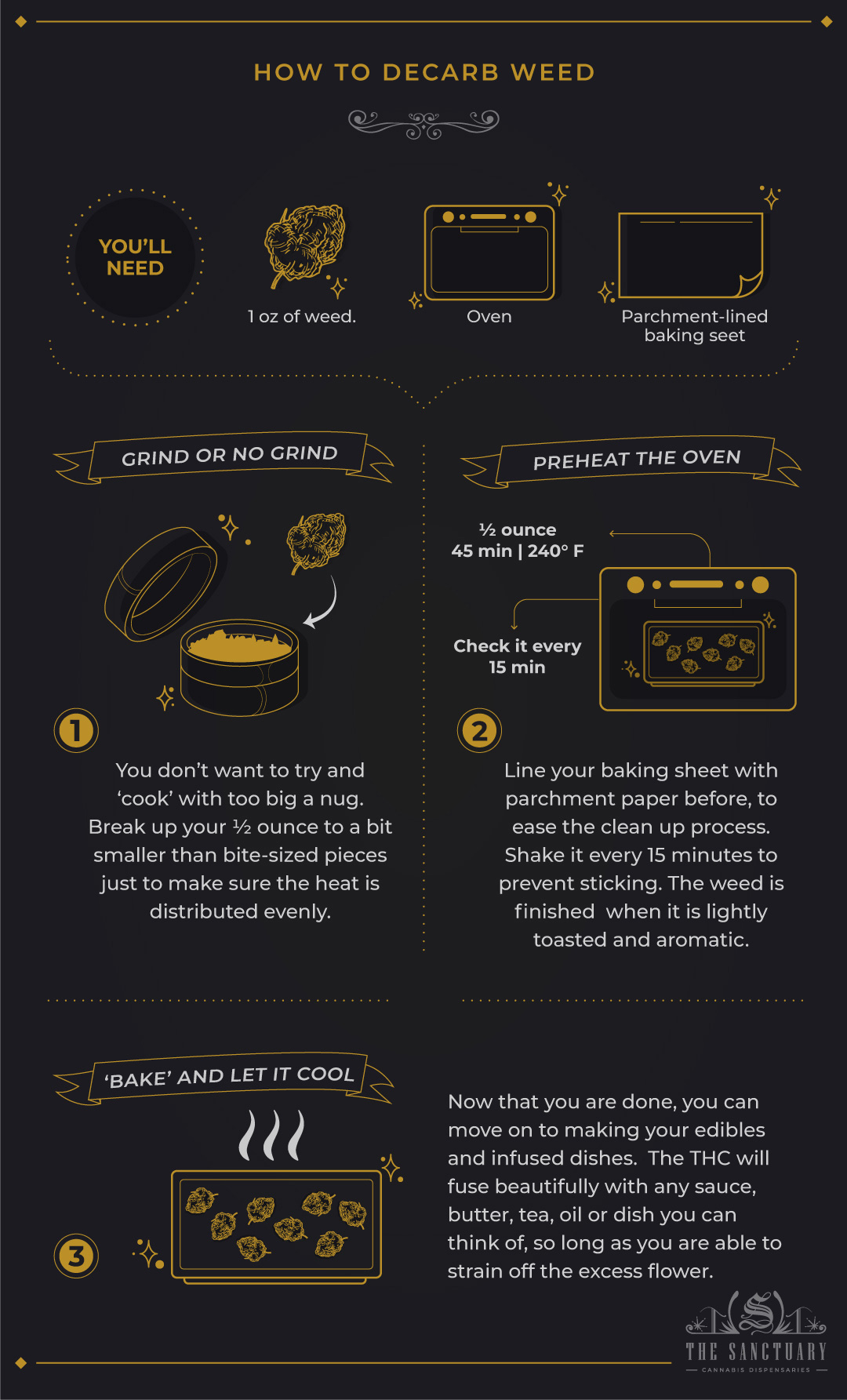 As long as you have your weed and heat in a controlled setting, you are 90% of the way there to decarbing your weed like a pro. Overall, the oven is the best way to decarb the plant but other methods like sous vide do have their advantages.

What You Will Need

For the best and most well known method, you are going to need the oven at a low heat, a parchment-lined baking sheet and your weed broken up and ready to go. A process like decarbing seems like it takes forever, especially at 240° F tops, but this will not take long at all.

Grind or No Grind

Somewhat of an ongoing debate is whether or not you should grind the weed up before putting it in the oven. So once and for all, should you do it? Yes. you do not want to try and ‘cook’ with too big a nug, as it might not be heated all the way through and release all the THC.

The secret is to break up your half ounce (if you are making a batch of edibles or two sticks of cannabutter) to a bit smaller than bite-sized pieces just to make sure the heat is distributed evenly. Ideally, you do not grind it up too fine before decarbing because something like a fine powder would burn or overdry at this temperature.

Last but not least, the temperature. For this amount of weed (about a half ounce), 240° F would be perfect since the consensus for that sweet spot is anywhere between 230° to 250°. Right before the weed goes in the oven, line your baking sheet with parchment paper to ease the clean up process.

45 minutes in the oven at 240° F should be perfect, giving the baking sheet a shake every 15 minutes or so to prevent sticking, but you may want to check it after 30 minutes in case things are getting too dry. You will know when the weed is finished decarbing when it is lightly toasted and aromatic. The whole process from start to finish is typically less than an hour!

‘Bake’ and Let It Cool

Now that you are done with the actual decarbing, you can move on to making your edibles and infused dishes. The THC is now being released and will fuse beautifully with any sauce, butter, tea, oil or dish you can think of, so long as you are able to strain off the excess flower instead of eating the bits of hot, dry weed in your food.

Do I Lose THC when Decarbing?

As much as decarbing is the release of THC and other weed compounds, you do not actually lose THC if you decarb your flower (at least not nearly enough to make a discernible difference). What we mean is the process of decarbing is more like ‘waking up’ your weed instead of trying to burn it or cook it off.

Ironically, you only really lose THC if you don’t decarb your weed, and this is why:

Eating raw weed is relatively safe, even though it is not recommended. The reasons why include texture, taste, but most notably for not getting the results you want. If the weed is not decarbed, there is no THC being released and therefore no way to get you high. So yes, you will potentially waste your flower if you want to make edibles and don’t decarb it: The taste will be off, the texture will be off and they will be nowhere near as effective as decarbed edibles.

Is Boiling Better for Decarbing?

Believe it or not, boiling (technically by sou vide) is another option for decarbing your weed and it is honestly not a bad one. The sous vide or boiling method is comparable to oven decarbing due to you being able to regulate the temperature of the water.

As long as you are using a proper vacuum seal bag (for the love of ganja, do not boil regular plastic), you can bring out your immersion device and set it to 205° F and literally 90 minutes in the hot tub will get the job done. However, sous vide tends to brown certain foods and may do the same with your flower, but it is nonetheless an effective way to decarb without an oven.

The vacuum sealing will obviously lock in all the aroma in the tightest space possible and give you fully activated weed in less time than the average movie, but the oven method cuts ahead with a shorter decarb and cooling time while requiring less equipment.