How to Do a French Inhale

At some point, we have seen videos on social media of people doing crazy smoke tricks, you might have even been good enough to make one, or at least brave enough to try to make one (keyword: try).

Whatever the case may be, the French Inhale and its slight variations have been and remain a classic for anyone looking to show off their smoke tricks, regardless of their experience. Luckily, you can learn how to French Inhale with just a little practice and a couple of tries to get it down.

We have also made a Youtube video, so if you want to see French inhale in action, check it out here.

What is a French Inhale?

Not the Wiz Khalifa song with Snoop Dogg, but possibly the oldest (and easiest) trick in the book. The French Inhale is a classic smoke trick of taking a hit and ‘circling’ the smoke from your mouth up through your nose while you breathe it out.

Instead of blowing out the smoke like normal, you are breathing it back in through your nose and then blowing it out. It’s a very simple smoke trick but one that always turns heads (believe us, it looks cooler and less weird than it sounds.

Does it Get Me Higher?

Considering oxygen hits your brain faster through your nostrils because it is an easier and more direct route to your brain, you would assume that this would get you higher or at least high faster, but that is not the case. The French Inhale, or just smoke tricks in general, may just be for show and not an extra high, but what a show it is.

How to French Inhale 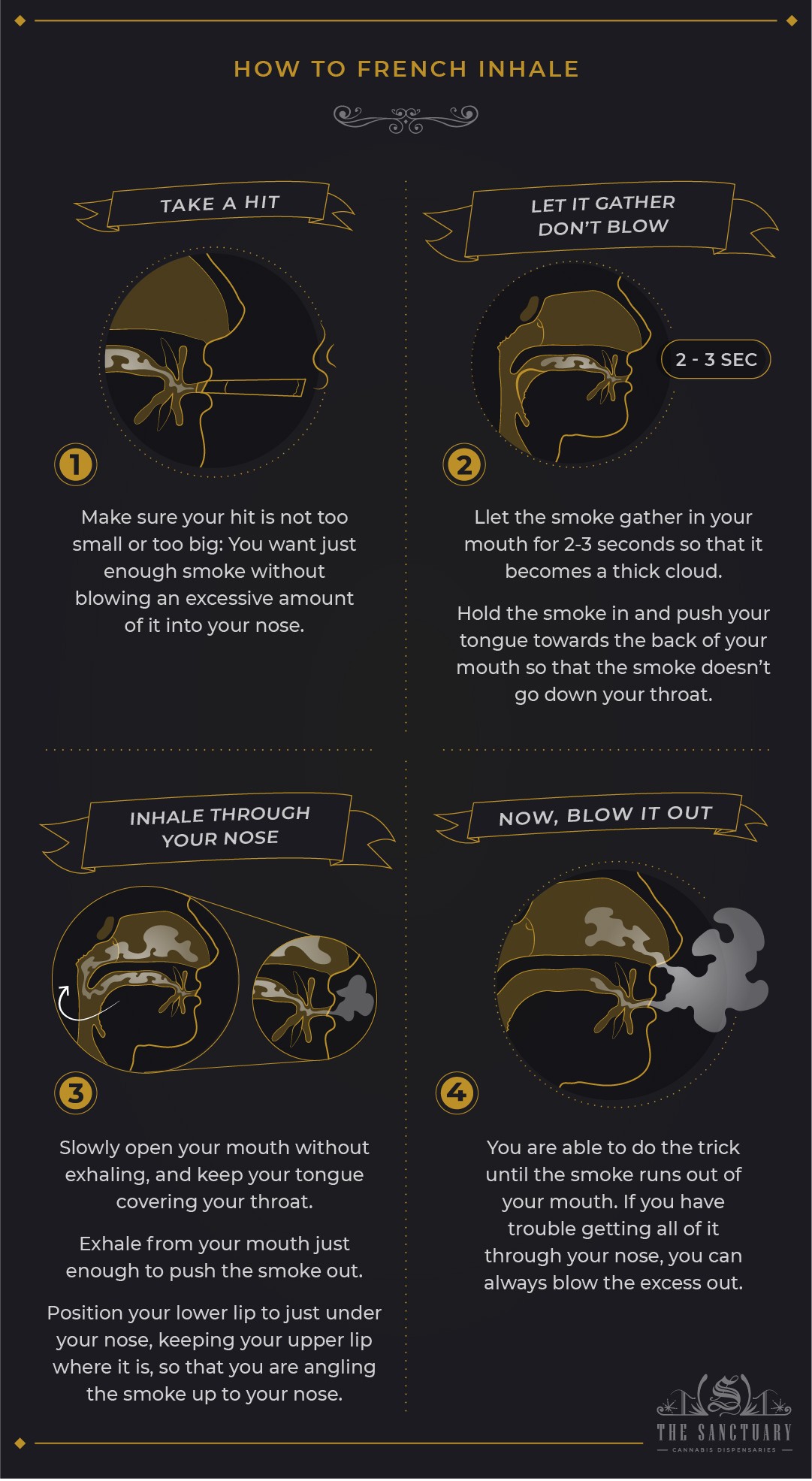 No exaggeration that this is one of the easiest smoke tricks you can learn. The French Inhale can be learned in four (technically three) steps and it can be done with just about any method or smoking device you have.

Even better, once you have grasped the basic French Inhale, it is just as easy, if not easier, to pick up its different variations or just put your own spin on the classic.

Whether or not you actually get the trick right, this will be your favorite step by far. But it’s okay, you can say this is for educational purposes.

Just make sure your hit is not too small or too big: You want just enough smoke to do a French Inhale and see it clearly, without blowing an excessive amount of smoke into your nose.

Step 2: Let It Gather, Do Not Blow

As mentioned, you do not want to immediately blow smoke out after your hit. Instead, what you want to do is let the smoke gather in your mouth for 2-3 seconds so that it can steady and become a thick cloud.

Make sure that you are not fully inhaling because you do not want the cloud of smoke entering your lungs. Hold the smoke in and push your tongue towards the back of your mouth so that the smoke stays in your mouth without going down your throat.

Step 3: Inhale Through Your Nose

Now that you have gathered a thick cloud of smoke, you want to slowly open your mouth without exhaling, and keep your tongue covering your throat so that the smoke has nowhere else to go but out and through your nose.

As you begin to inhale through your nose (steadily, but not super hard), you want to exhale from your mouth just enough to push the smoke out. To better help it go up your nose, position your lower lip to just under your nose, keeping your upper lip where it is, so that you are angling the smoke up to your nose.

By doing this, you are doing a basic French Inhale. Simple as that!

You are able to do the trick until the smoke runs out of your mouth. If for any reason you have trouble getting all of it through your nose, or just have some leftover, you can always blow the excess out: No one cares, you did your best.

You can practice your French Inhale anywhere that is not too windy or has a draft, but still has decent ventilation so you can blow the smoke out safely. If you did not get what you wanted on the first try, it only takes one puff to do a French Inhale, so give it a couple tries until you are happy with it.

But, once you have it down and can do a basic French Inhale, you are ready to step your game up and try its different versions.

The good news is they all follow the same basic steps but each has a slightly altered technique. You are not relearning the trick with any of these variations, but simply figuring out how to do it a different way.

For veterans of the French Inhale and fans of The Dark Knight Rises, this first variation will have your cloud resembling Tom Hardy’s iconic Bane mask from the movie. It starts the exact same way as the French inhale but changes once you get to the last step.

Take a hit, hold it in, but instead of just pushing your lower lip forward, touch your bottom row of teeth to your upper lip before slowly inhaling into your nose. The smoke will be broken up by those small spaces between your teeth, giving you the makeshift Bane look.

More similar to the classic French Inhale, the Dragon aka Dragon Breath will have you breathing smoke out of your nose but also through the sides of your mouth. By the sound of it, you need a pretty big puff of smoke or vapor, and you do, but it is very simple to finish the trick.

Once your king-sized cloud of smoke is hanging out in your mouth, open the corners of your mouth ever so slightly and deeply exhale out of your nose and mouth at the same time. This is arguably easier than the French Inhale, and it will have you looking like a fire-breathing dragon: Consider that a bonus.

Last but not by any means least, the Bull Ring will give you the smoky iconography of either a raging bull or a door knocker.

To start, circle your mouth the same way you would to blow O’s, blow one out and quickly lean in to breathe in the top of the O through your nose. (Do not lean too quickly because you do not want to break the shape).

How cool would it be to have a smoke-ring nose piercing without having to be under the needle? Just promise us that you will not bull rush any bystanders wearing red.