The Healthiest Method of Smoking Weed: How to Toke Up The Right Way

The medicinal benefits found in weed have been studied and recorded for decades, but the safety of its consumption is still an issue for some, particularly to new users. We know that smoking cigars or cigarettes is unsafe, cancerous and the leading cause of preventable death in the United States, but is weed smoke just as unhealthy as tobacco smoke?

Weed still contains some of the carcinogens found in tobacco smoke, but not as many since weed or THC does not naturally contain formaldehyde or nicotine (not to mention, a direct link to smoking weed and lung cancer has yet to be discovered).

However, any large amount of smoke that is continuously entering your lungs is unhealthy regardless of substance: Any form of smoke still brings excess heat and particles that can irritate or permanently damage your lungs.

What is the healthiest (or safest) way of smoking weed?

In short, it all comes down to the cleanest vessel in which the flower itself is contained, but also the temperature of smoke and how it is being inhaled: The method of smoking that does all of the above reasonably safely is by way of smoking clean joints or pre-rolls.

There are a wide array of methods for consuming weed and there are even multiple ways of consuming it through smoke:

These are just some of the ways to consume weed in the form of smoke. Meanwhile edibles, concentrates and CBD/THC patches can give you your fix without inhaling smoke at all.

Keep In Mind: There is no method of smoking weed that is purely and absolutely 100% safe. Any of the methods mentioned above can still be damaging in excess, so always consume responsibly.

We answer by ‘studying’ each method of consumption, which may or may not have involved snacks, and when these methods are compared side by side, the results were as follows:

Arguably the most common method of smoking weed, the one most portrayed in the media and the most popular among consumers: Crushing or grinding up your weed and rolling it into a paper to smoke as a makeshift cigarette.

It is simple, effective and relatively easy and inexpensive to do, making it an ideal choice for beginners and veterans alike.

How is this the safest method of smoking weed? Well, there are 2 main reasons:

Even smoking weed through a hookah pipe can still contain traces of tobacco and nicotine if the pipe was not properly cleaned. This ties directly into:

If you really think about it, smoking weed is vegan.

They may look the same for the most part, but blunts are different from joints for being made of hollowed-out cigars instead of from scratch with a rolling paper.

Right off the bat, this makes the blunt method less safe than smoking joints because when you smoke from a hollowed cigar, you are likely inhaling remains of nicotine and other toxins found in tobacco that are not found in weed.

Also, smoking a blunt increases the danger compared to joints because cigars are so much larger than a standard piece of rolling paper: you are inhaling more weed and more smoke during each hit. While that does not mean an overdose, it potentially means biting off more than you can chew in terms of your high.

Stepping into more modern times, we have vaping: heating up weed or vape oil to the point of producing vapor as opposed to smoke. But does that make vaping safer than the former?

According to the CDC, vape pens and e-cigs have been linked to lung injuries due to improper use, including dirty cartridges or when a more potent strain or concentrate is inhaled too deeply. Typically, weed is being burnt (destroyed) when traditionally smoked, so it actually ‘hits differently’ as a vapor, creating more of a risk of overdoing your hits.

In these instances, and as a general rule of thumb across all consumption of cannabis, moderate your use the same way you would with alcohol or medications.

You could say it was the precursor to vaping, but doing a rip from a bong is just as easy as making one: combusting dried weed with a lighter, which produces smoke that passes through water to cool.

Now the question is: Since we established the safety of vaping and smoking weed, where does a bong rip fall in comparison?

The answer: Not much differently than vaping. Again, the bong has smoke passing through water to temper it. This does not filter out very many carcinogens (but some), and the process does make smoke less hot and more comfortable as you inhale it.

Because of this, bongs are really no safer or more dangerous than vaping as it poses the same risks of ripping or ‘hitting’ the weed too hard because it does not feel as irritating, and if you rip from a bong that is not cleaned, you invite some unwanted particles into your mouth and lungs.

Alternative Ways of Getting High 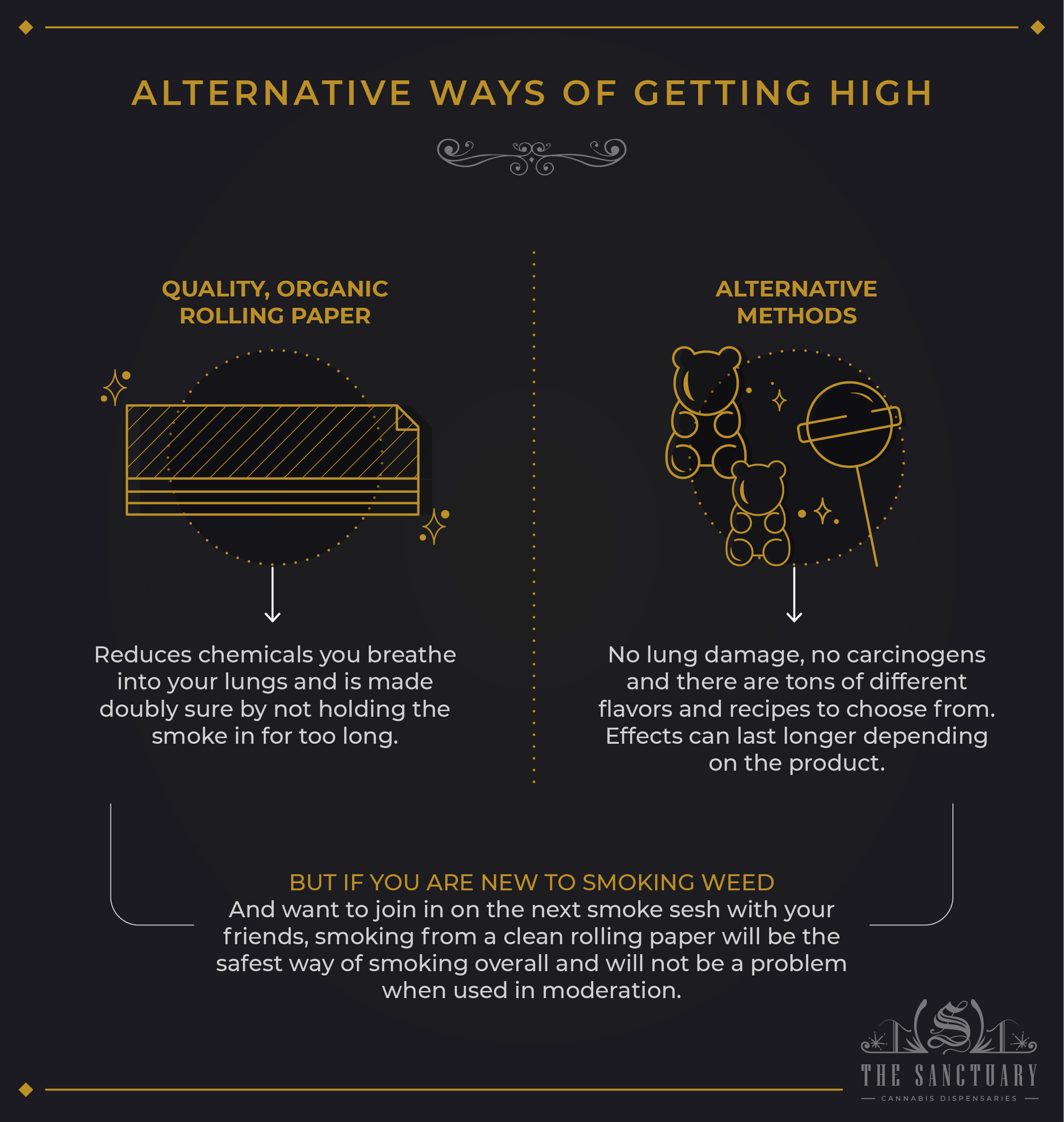 Lighting up your joint with a fresh piece of high-quality rolling paper shapes up to be the safest method of smoking weed, but rest assured: Any one of these methods can be consumed safely on part of the patient or consumer: Quality, organic rolling paper already reduces chemicals you breathe into your lungs and is made doubly sure by not holding the smoke in for too long.

Smoking safely in any other fashion can be done simply by keeping your devices clean and inhaling potent strains and concentrates responsibly.

But, say you’re looking to get high and might be nervous about inhaling any kind of smoke, or just wanna try something new and see what else is out there. There’s always edibles: No lung damage, no carcinogens and there are tons of different flavors and recipes to choose from.

Also, effects can last longer depending on the product. But if you are new to smoking weed and want to join in on the next smoke sesh with your friends, smoking from a clean rolling paper will be the safest way of smoking overall and will not be a problem when used in moderation.