It's Solaris Sunday! Check out these deals today

How to Make a Homemade Weed Pipe

A pipe is one of the best and most convenient methods to consume weed. Put some cannabis in the bowl, light it, and take a hit from the mouthpiece, and you’ve got yourself a pipe.

You can purchase a variety of pipes, but it is also simple to construct your own. When you have cannabis but no way to smoke it, homemade pipes are always a good option. You’ll be amazed at how simple it is to construct your own smoking device, and while they won’t provide the same level of quality as a well-made glass piece, you’ll be surprised at how well they function.

The apple pipe and water bottle pipe are two of the most well-known examples, but the possibilities are only limited by your creativity.

Invest in a pipe screen 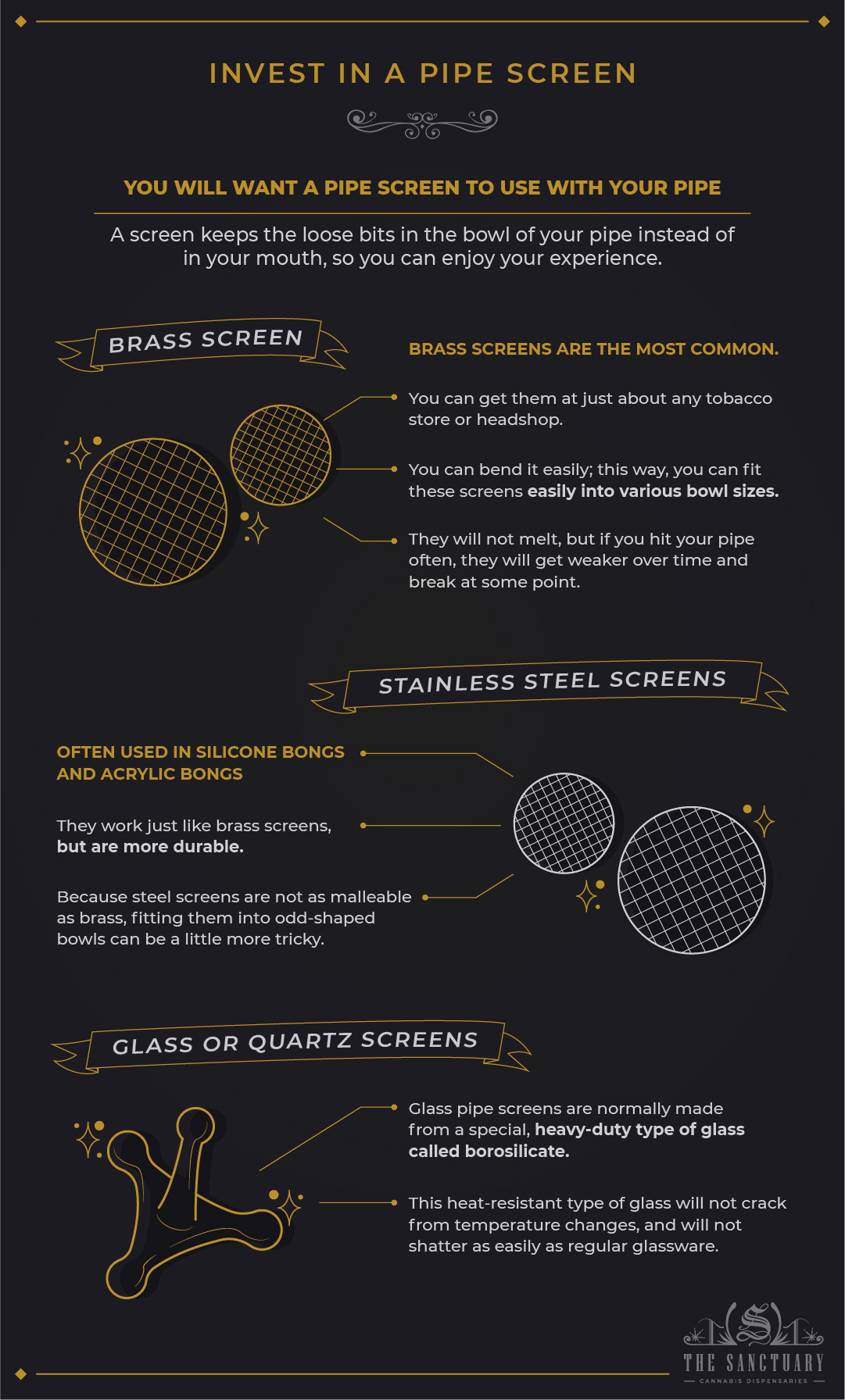 You’ll need a pipe screen whether you construct your pipe out of a Coke can or a piece of fruit. It’s possible to smoke cannabis without a screen but it could be a tough experience. A screen keeps the loose pieces of bud in the bowl of your pipe rather than in your mouth.

So, with your homemade pipe, which pipe screen should you use? Users can choose from three different types:

The apple pipe is a classic among homemade pipe. When stoners wanted something simple to smoke out of, they made this. One of the nicest things about the apple pipe is that all you need to do is cut holes in it. You won’t have to be concerned about the toxic fumes released by melting a plastic water bottle pipe, for example.

Take an apple and cut out the top of the core and stem with a narrow knife to form the bowl. After cutting out your bowl, use a pen, pencil, or chopstick to dig the hole a little deeper until you reach the apple’s center.

Then, shove the pen, pencil, or chopstick into the side to create a mouthpiece tunnel. Dig the tunnel all the way to the apple’s core, then link it to the hole you made for the bowl. You should also poke a tunnel for the carb hole on the side of the apple, which is the hole you cover with your finger to control the airflow of your pipe.

You can pack your weed bowl right on top of the apple if the hole is tiny enough. Otherwise, add your screen or some aluminum foil with holes poked into it over the top if it’s too big. Take a pull from the hole in the side when lighting your cannabis, and you’ll receive smooth, delicious smoke no matter what strain you choose.

The pepper pipe is another fantastic homemade pipe that you can build using items from your kitchen. Because bell peppers are hollow on the inside, they make excellent handmade pipes.

Cut a tiny hole on the side of the bell pepper. Carve out the stem and core of the pepper with a tiny knife without cutting through the bottom of the pepper. Use a bigger screen or aluminum foil with holes punched into it to cover the top and use it as a bowl. Following that simple construction, your pepper pipe should be ready to use.

Many fruits and vegetables may be prepared in the same way. Common household produce and a few minutes are all it takes to construct one of these fantastic DIY food pipes.

A popular DIY smoking gadget is the water bottle pipe. To construct this pipe, you’ll only need a few things that you probably already have on hand.

Begin by cutting a hole in the side of the bottle towards the bottom. This will be your bowl, so make it as big or tiny as you want it to be based on the size of your screens. Rotate the bottle and cut another carb hole a few inches away from the bowl. Simply remove the cap of your bottle to access the mouthpiece.

Bend your screen or use tin foil to fit into the first hole you made. Inhale through the top of the bottle after putting some cannabis in the bowl and lighting it. This can be done fast and easily with any type of plastic bottle.

Another simple and successful DIY smoking gadget is the pen pipe. A pen is all you really need, however there are a few different methods to turn it into a pipe.

Using a pen with a metal screw cap at the tip is the easiest approach. Remove the cap, the ink cartridge, and the other end of the pen, leaving you with an empty plastic tube.

To use as a bowl, place the metal screw cap backward in one end of the tube. The mouthpiece is on the opposite end. You’re ready to smoke after sealing the bowl with tape or even chewed gum.

The greatest in terms of performance and overall quality, providing expert highs that often match even the best-made bongs. The gravity bong is one of those DIY smoking gadgets that will get you so high you’ll be surprised.

A gravity bong, as the name implies, makes use of gravity to enhance your smoking experience. A 2-liter bottle is typically used, although any plastic container would suffice. Fill a bucket with water until it is approximately halfway full.

After that, take the empty bottle and cut off the bottom. Remove the cap and replace it with a piece of tin foil that has been pierced with holes. Wrap the foil over the top of the bottle tightly enough to keep the smoke out but loose enough to remove as needed.

Place the bottle in the water two-thirds of the way down, with the top facing up. Pack your cannabis into the foil while keeping the bottle pushed into the water, then gently lift the container as you blaze your greens, allowing gravity to absorb all of the smoke you’re going to consume. If you totally remove the bottle from the water, you will lose all of your smoke!

Remove the foil dish carefully and place your mouth over the top. Inhale the smoke while pushing the container back down into the water. The smoke will shoot into your lungs due to gravity.

Despite being a little sticky, this is not only a fun crafts project, but it’s also one of the cutest handmade smoking devices. Simply stack and form the Starburst candies into a pipe after you have the right number of them, ranging from 5-7. Squish them together until they are sufficiently glued together.

Make a hole in the shaft of your Starburst pipe using a skewer. Then, on one end of the pipe, twist the skewer at an angle to form a bowl. You might want to put it in the fridge for a few minutes at this time to solidify. While you were manipulating it, it may have become too soft. Fill the pipe with weed once it has hardened and then you can smoke from it.

A steamroller is a thick glass pipe with a bowl approximately three-quarters of the way up that is open on both ends. You shield one end with your hand while taking a massive hit from the other. An empty toilet paper or paper towel roll can also be used to construct one of these.

Cut a tiny hole about a fourth of the way down one end of the cardboard roll with scissors or a small knife. To use as a bowl, fold your screen into a cone or create a cone out of aluminum foil and insert it. Tape or blue-tack the opening in the tube shut.

Light the bowl and take a hit from the other end while covering one end with your palm. Because of the tube’s broad construction, it will deliver extremely powerful strikes with plenty of airflow.

One of the easiest techniques is to use a soda can pipe. All you need is a knife and a metal soda can. The mouthpiece is already in place; all you need to do now is turn the side into a bowl.

Make a depression in the side of your can with your thumb, then poke holes with a knife or needle. This is where you ignite and place your flower. When you inhale via the can’s mouthpiece, you’ll get a steady stream of air.

This is one of the simplest DIY pipes to construct, but it isn’t the finest. Because of the paint on the side, breathing pollutants from burning soda cans are common. It is, nevertheless, highly effective if you have no other choices.

A Tic-Tac bong is a little smoking device made from a Tic-Tac box. It’s quick, easy, and, for such a little handmade smoking equipment, it works surprisingly well.

Insert a thin tube, such as a pen tube or a straw, through a hole in the side of your box. Roll a piece of aluminum foil into a cone and place it on the end of the tube that sticks out to make a bowl. Inhale through the tiny hole at the top of the box after placing your cannabis in the bowl and lighting it.

Making a tiny and inconspicuous DIY bong is extremely simple. You may fill it up with water as long as you don’t overfill it. It works effectively for taking little but effective hits even without water.

How to Detox from Weed: 4 Ways to Get Clean

What does Weed Do to Your Brain?

Top 10 Countries Where Weed is Legal

We would love to hear from you. Please contact us and someone from our team will reach out to you