How to Make a Pipe Out of a Pen

If you are trying to smoke weed and you do not have a pipe around, then it is time to get creative. There are many options to try and re-invent random household items into a smoking device. But possibly the most common thing to have in one’s house is a pen. Pens are not just common to have, but they also make for an easy DIY one-hitter style pipe.

Other good DIY smoking devices include a gravity bong or an apple. But not everyone has apples sitting around the house and sometimes a gravity bong will not work or is not discreet enough for use in public settings.

Sometimes you just quickly need something that is easy to conceal and discreet, that can be made out of items you can find in most households.

First off, smoking from random materials found around the home is often not the greatest idea. Materials such as thin metals or plastics can contain highly dangerous chemicals that will burn off and release toxic gases when heated to a high enough temperature. If you can avoid it, do NOT smoke from these types of materials.

Supplies you need to build a pipe

You will need the following supplies to make a one-hitter style pipe from a pen:

Not all pens are the same, so you may have to try a few different old pens to see which will work best for making a DIY pipe. The ideal pen to fashion into a pipe will have a screw-off metal tip, a back end that can be taken off, and an ink stick that is easy to remove.

A metal socket is another piece that you could use to attach to your pen pipe as the bowl. This will only work if it is the exact size of your pen. By not using a metal socket or if the tip of your pen is plastic instead of metal, then you will be smoking directly from plastic. Smoking from metal, albeit still hazardous, is considerably safer than torching plastic.

Steps to building your pen pipe 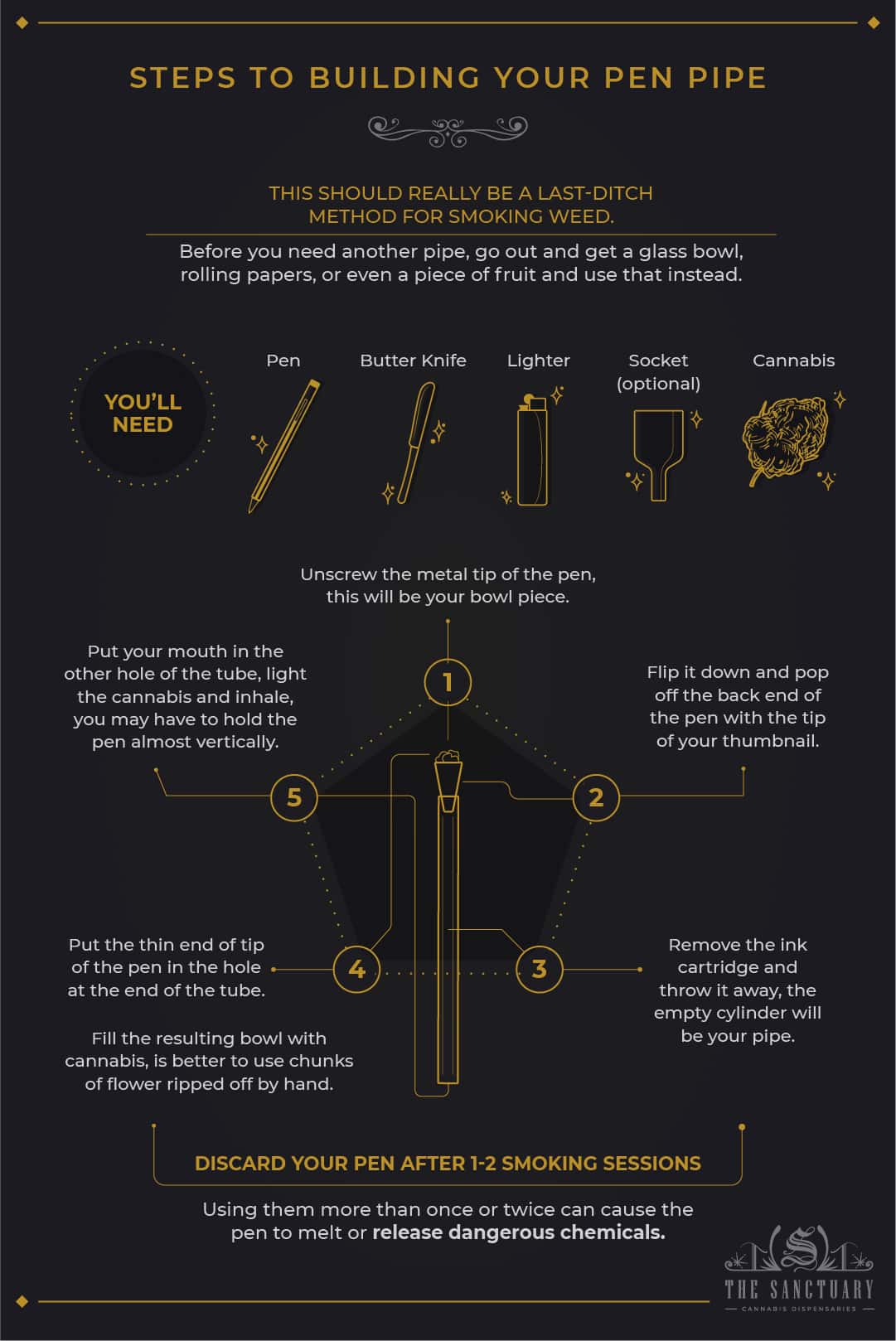 Follow these steps to build a pen pipe for you to smoke weed out of:

Pens are not designed to be used as pipes, therefore it is important to throw out your pen after 1-2 smoking sessions. The pen can begin to melt and release toxic chemicals if it is used too many times. If you have to, just make another pen pipe after a couple of uses.

Again, this is not an ideal way to smoke weed. Do yourself a favor and go out to a headshop, liquor store, or even some gas stations and buy a pipe that is made out of glass. This is much healthier and way more satisfying.