How to Pass a Hair Follicle Test

By The Sanctuary Editorial TeamLast updated on July 11, 2022No Comments

The occasional smoke sesh will not cause any long-term damage (if any, at all) but what remains in your system will likely be there for longer than you might expect. For example, if you smoke a couple of times out of the week but don’t get completely blazed each time, that very last joint that you smoked would be detectable in your urine for up to a month but in your hair follicles for up to 90 days.

But if you have an upcoming job interview followed by a hair follicle test, how would that be possible for you to pass? Well surprisingly, you do still have a few options to help you pass the longest and most detectable drug test within a much shorter time frame.

When do I need a Drug Test?

You likely will not need to test for drug use on such a regular basis, but any of your potential future employers have the right to test you for cannabis or other substances, especially for Fortune 500 or government jobs, or if a court mandate requires you to go through multiple tests.

Every company is different, but it is not unusual to have to schedule your pre-employment drug test the day you accept the offer, usually within the first two days. While the purpose of random drug screenings is to be, well, random, you are much more likely and will be required to have to test on the spot if you exhibit behaviors that signal drug use. So, do us all a favor and do not get high on the job.

Are They All the Same?

They may all be testing for the same kind of drug use, (which is just about any), but pre-employment tests can vary quite a bit between states, industries or companies. For instance, some companies will not require you to test at all, others do not test for cannabis use, and some can refuse to hire you if you test positive for cannabis but only use it medicinally.

The method in which the tests are performed also vary from one test to another. The universally known test is the urine sample since it is the only federally-mandated method for drug tests.

However, hair follicle tests have been growing in popularity with the rise of legalization as it can detect things like THC for much longer than a urine or saliva test (which is also popular because it’s the easiest). Sobriety and court-ordered tests are effectively all the same: any substance that puts you under the influence is prohibited in these screenings, no matter the circumstance.

How to Pass a Hair Follicle Test 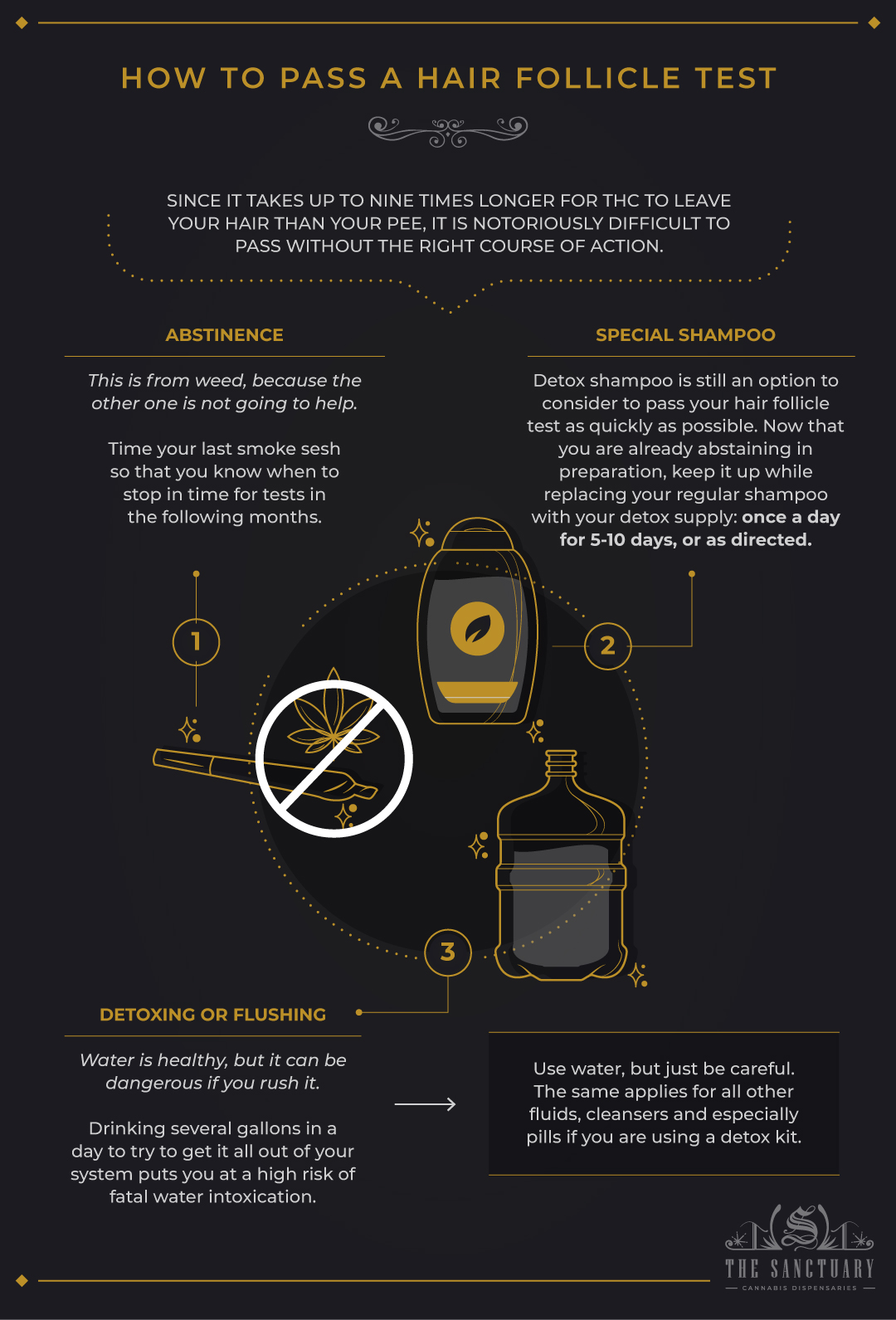 On the most basic level, you can pass a hair follicle test the same way as you would any other drug test, and that would be to stop smoking weed (at least temporarily). But since it takes up to nine times longer for THC to leave your hair than your pee, it is notoriously difficult to pass without the right course of action.

To pass this test well within the 90-day traceable period requires either expert timing, a strict detox plan, abstinence from weed or any combination of the three.

We have to specify this is from weed, because the other one is not going to help. Nevertheless, the one surefire way to pass an unexpected hair test is timing your last smoke sesh so that you know when to stop in time for tests in the following months. Should that not be an option, maybe your screening is in the next month or less, you still have a few tricks to get you prepared.

Some brands can be a hit or miss, others can be overpriced, but detox shampoo is still an option to consider to pass your hair follicle test as quickly as possible. Now that you are already abstaining in preparation, keep it up while replacing your regular shampoo with your detox supply: once a day for 5-10 days, or as directed.

Water is also a healthy and effective way of flushing out your follicles, but it quickly turns dangerous if you try to rush it. Drinking several gallons in a day to try to get it all out of your system puts you at a high risk of water intoxication, which can be fatal.

By all means, use water, but just be careful. The same applies for all other fluids, cleansers and especially pills if you are using a detox kit.

Can you Pass the Hair Test in 24 Hours?

We have covered how it is actually possible to speed up the detox from 90 days to about 2 weeks, but there is one way to pass the test even faster: Schedule your test as soon as possible.

If you are thinking that does not make sense, let us explain: Even though cannabinoids and other compounds stay in your hair longer than any part of your body, there is still a delayed response of actually traveling that way through your system.

Let us assume that you have not smoked at all within the last three months and decide to toke up one day. Basically, it could take up to 48 hours for THC to be detectable in your follicles, but you would ideally want to schedule the test within 36 hours of your last hit. Scheduling your screening within 24 hours of smoking would be the best option, the sooner the better.

What Happens if I Don’t?

It may affect you starting with the position or team you just got hired for, but it is not the end of the world if you do not pass the employment screening. Especially since there are a myriad of other jobs that do not even test you to begin with, or in the case of trucking companies, failing a hair follicle test does not disqualify you from the position.

No, this is not the case for every single company but even if you know you cannot pass within the next week you might be able to reschedule to give yourself ample time to detox. With a consistent but sometimes expensive detox regimen, you can be ready to pass your hair follicle test in about 7-10 days (after your last hit). The process may need more time than detoxing for a urine test, but the proper regimen will have you ready far before the 90 days.