By The Sanctuary Editorial TeamLast updated on August 10, 2022No Comments

With around 66% of regular users reporting to have tried it at least once, it is safe to say that dabbing is here to stay. By a certain time in their cannabis exploration, the modern stoner is bound to end up within the space of concentrates. Those little golden nuggets of concentrated THC come in many shapes and sizes (most varying in terms of potency), but because of that, how would you go about smoking something like Rosin? Is there one specific method of getting your fix that is a cut above the rest?

Technically yes, since all concentrates are essentially meant to be dabbed, or vaped to a certain extent. But it does not end there: virtually any way of smoking weed under the sun has room to add in your dabs, so if you have a favorite, no need to worry about it not working with rosin.

Like every other cannabis concentrate, rosin is the pure extract of everything that makes the plant psychoactive, resulting in what will arguably be the strongest high of any cannabis product you can legally obtain. The best thing about rosin is that it is 100% made from the cannabis plant (literally, the plant is just squeezed into a machine with special heating pads that push out all the good stuff into a superheated oil of concentrate) without any chemicals or foreign substances.

Rosin may be a bit harder to make than other concentrates, ones that are made by just extracting with alcohol, but it is much easier to smoke and is the purest and most natural concentrate on the cannabis market.

Despite the very, very similar names (that may or may not have caused the author to Google in between writing this article), the two in question are, in fact, different and separate concentrates. They may not even look that different upon the first glance, but to the trained eye, you start to see differences in their respective textures.

The one major difference between resin and rosin is their chemical composition: Rosin would not technically have one as it is basically a superheated block of THC from a hash or bud (or kief), while resin on the other hand, cannot be made without Butane oil or ethanol.

How to Smoke Rosin 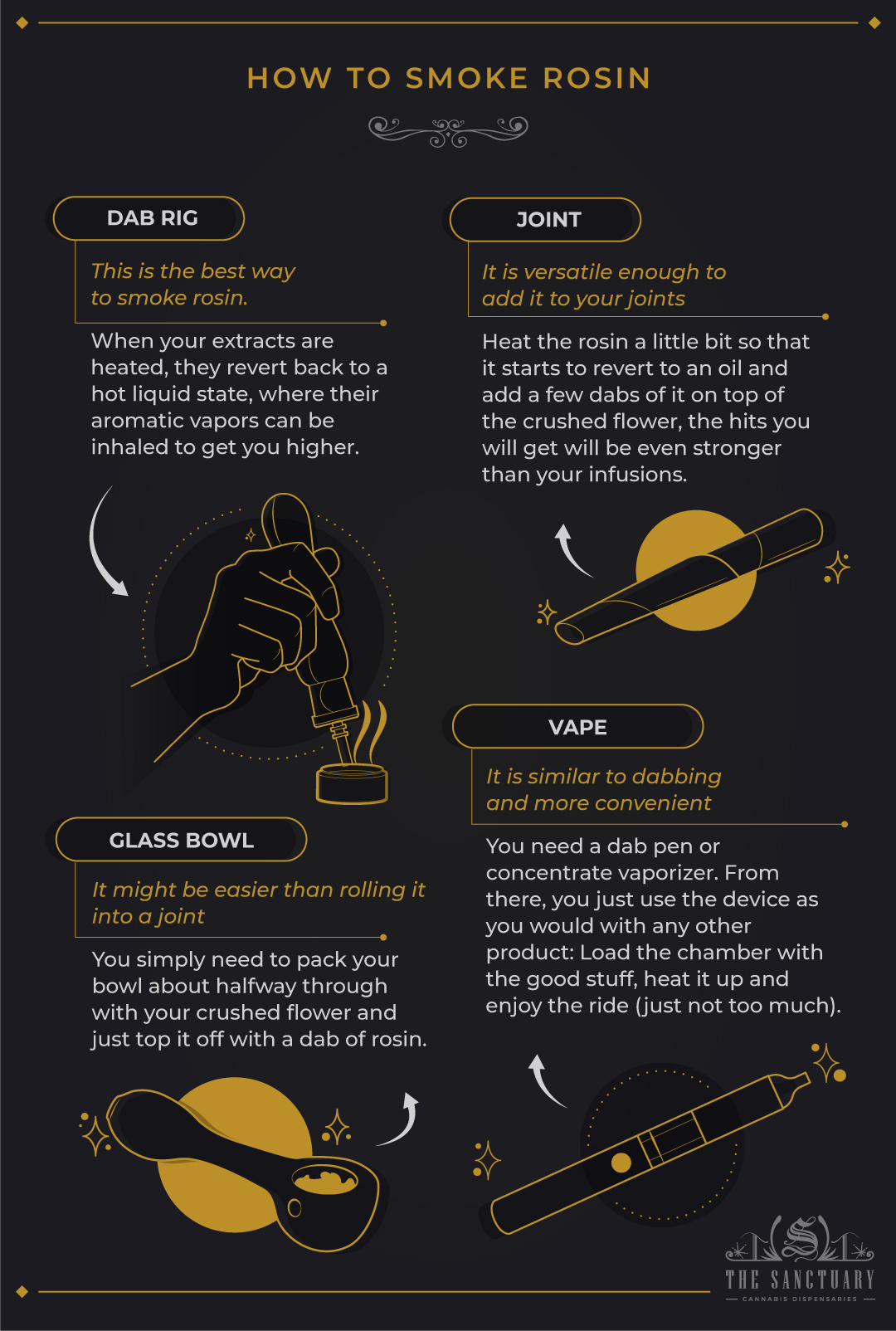 Rosin is just like many great things in life and like most variations of weed: You have multiple options to smoke with it. It may be a concentrate and may have been made for doing dabs, but this is not rosin’s final destination: That could very well lie in a joint, your vape cartridge or even your new pipe. Wherever the ‘high times’ are had, that is where rosin can find a new home.

Let’s get the obvious out of the way: As a concentrate, this is meant for your dab rig so this is going to be the best way to smoke rosin. When your cannabis extracts are heated (technically evaporated), they revert back to a hot liquid state, where their aromatic vapors can be inhaled to get you higher than the national debt. Your rosin started out as a liquid to begin with because that is the only way to extract it from the plant, so keeping it in this state while you smoke is how the extracted THC will remain at its peak.

Rosin may have been meant to smoke as a dab, but is versatile enough to try in a number of ways, including rolling some into your joints. Since it is easy for rosin to just stick to your rolling paper and not burn the right way as a result, all you have to do to make it work is heat the rosin a little bit so that it starts to revert to an oil and add a few dabs of it on top of the crushed flower.

Infused pre rolls are made similarly with hash, but not only are rosin joints easy for even the newest roller of the group, but the hits you will get will be even stronger than your infusions.

If instead, you are trying to look a bit classier and smoke rosin from a pipe, you have that option as well. In what might be even easier than rolling rosin into a joint, you simply need to pack your bowl about halfway through with your crushed flower and just top it off with a dab of rosin.

You will never look at your pipe the same way again.

It may not be the same as hitting a dab, but vaping is very similar and more convenient as you can take it literally anywhere where you can smoke weed. Again, always proceed with caution when smoking or vaping as either will give you a much stronger hit than the average joint.

To smoke rosin and have it fit in your pocket (at least without spilling out everywhere), you obviously need the right device to get the job done, also known as a dab pen or concentrate vaporizer. From there, you just use the device as you would with any other product: Load the chamber with the good stuff, heat it up and enjoy the ride (just not too much).

How does Rosin compare to other concentrates?

It can still depend on the strain or type of weed in which it came from (and by brand, to a certain extent: price, quality, etc), but rosin nonetheless earns its spot in the family of concentrates despite being commonly referred to as the beginner’s dab. This is only because Rosin tends to be a bit less potent than wax and especially live resin, but it would still topple an infused preroll in terms of both THC and how quickly the high would hit you if it was dabbed.

Is it the most potent?

Surprisingly, rosin is the most naturally occurring of all weed concentrates, seemingly explaining why it is the least potent. Hard to believe, right? But it is true, if you examine the THC count of rosin, live resin, wax and shatter, rosin would obviously be strong but still have the lowest count. At the same time, the most artificial and hardest to produce would have the highest amount of THC, and that would be Shatter.