What does Weed Do to Your Brain?

To make a long story short, weed (especially CBD) is essentially harmless when casually used without other substances. It does have a number of medicinal benefits, we know the higher the THC count, the higher the you, but what exactly does weed do to your brain to give you these effects?

To explain, we know that in order to get high, THC has to pass through your lungs and your bloodstream, but what happens when it makes that final stop at the brain? In two words, that answer is hitting receptors: what interacts with cannabinoids to give you the plant’s full effects.

In more than two words, we explain in detail how the brain gives different elements of the ‘high’.

How is Weed Psychoactive?

If you are wondering what is the reason music sounds the way it does or why cartoons are as awesome as they are when you are high, look no further than THC. Tetrahydrocannabinol is basically a chemical compound of Carbon, Oxygen and Hydrogen: the combination of which interacts with the parts of your brain that give you pleasure, coordination and thinking, among other things.

Imagine these areas of the brain are each like their own band: not as one ensemble since smoking weed affects memory differently than pleasure, for example. THC and its ingredients are like high guest artists that just waltz in and start changing the tempo, changing the rhythms and replacing every song with lofi hip-hop.

Not much of an exaggeration depending on the strain. In short, THC is psychoactive by way of (temporarily) rewriting chemical reactions in your brain resulting in those senses being warped.

How Long Does It Last?

Seeing how THC actually works might sound off putting but rest assured, you are not in any danger so long as you do not overdo it. The effects of high, as submersive as they feel, are literally always temporary and a wide number of variables will determine how long they last.

For example, your very first time smoking weed ever and just about every time after, until you greatly increase your intake, will last about 2-3 hours. However, these are just some of the factors that can affect how long your high lasts:

Any one of these factors and more could make your high last longer, possibly up to 10 hours or shorten it to where it feels like weed no longer gets you high. It may depend on a lot of things, but expect it your high to generally last a short afternoon.

What Does Weed Do to Your Brain?

It obviously varies from CBD to THC, but these cannabinoids essentially attach to nerve cells in your brain and start to effect how those cells operate. This enables many of the well-known symptoms we associate with being high.

To break down exactly how weed affects your brain, we look at some of the functions that are impacted by weed use and how those are affected when you toke up.

Not the show of the same name, but the feeling of euphoria is arguably one of the two most well-known affects that makes people want to get high. What happens when you smoke or consume your weed is that the components like THC react with your brain’s neurotransmitter, dopamine; the chemical that is prominent in response to stress and pleasure.

As you experience more pleasure, your body produces more dopamine, and weed just hits that neurotransmitter even if you are not actually experiencing pleasure when you partake. This is exactly why people use weed as an escape or after a bad day, but you generally do not want to associate one substance with you feeling happy.

The munchies are quite possibly the other half of the two most popular effects of a high, and is directly the reason why THC strains are prescribed to cancer patients to help them get their food when they do not have an appetite.

Very much like the euphoric part of a high, dopamine is also released when you eat some really good food or are full after you are really hungry. Speaking of hungry, grehlin is the hormone that stimulates hunger, which is activated when you smoke weed.

A slight misconception is that the weed itself is actually making you hungry, and while that’s technically right, it is not the whole truth. Weed triggers the hormone that tells your brain you want food, even if you already ate: It doesn’t actually empty your stomach and make you hungry, it just sends that message to your brain and makes eating sound better than usual.

A very big, life-changing decision is already difficult on its own, and do not expect to make that decision when you’re high. To clarify, weed is not making you stupider but it is releasing enough things like dopamine and ghrelin to get in the way of your cognitive decision making and impairing your judgement during the smoke session.

This is mainly because THC is already hitting your brain’s cannabinoid receptors, giving you all these elements of a high which inhibits your focus on making those decisions. Also, be honest: the ones you do make while you high are not the best. 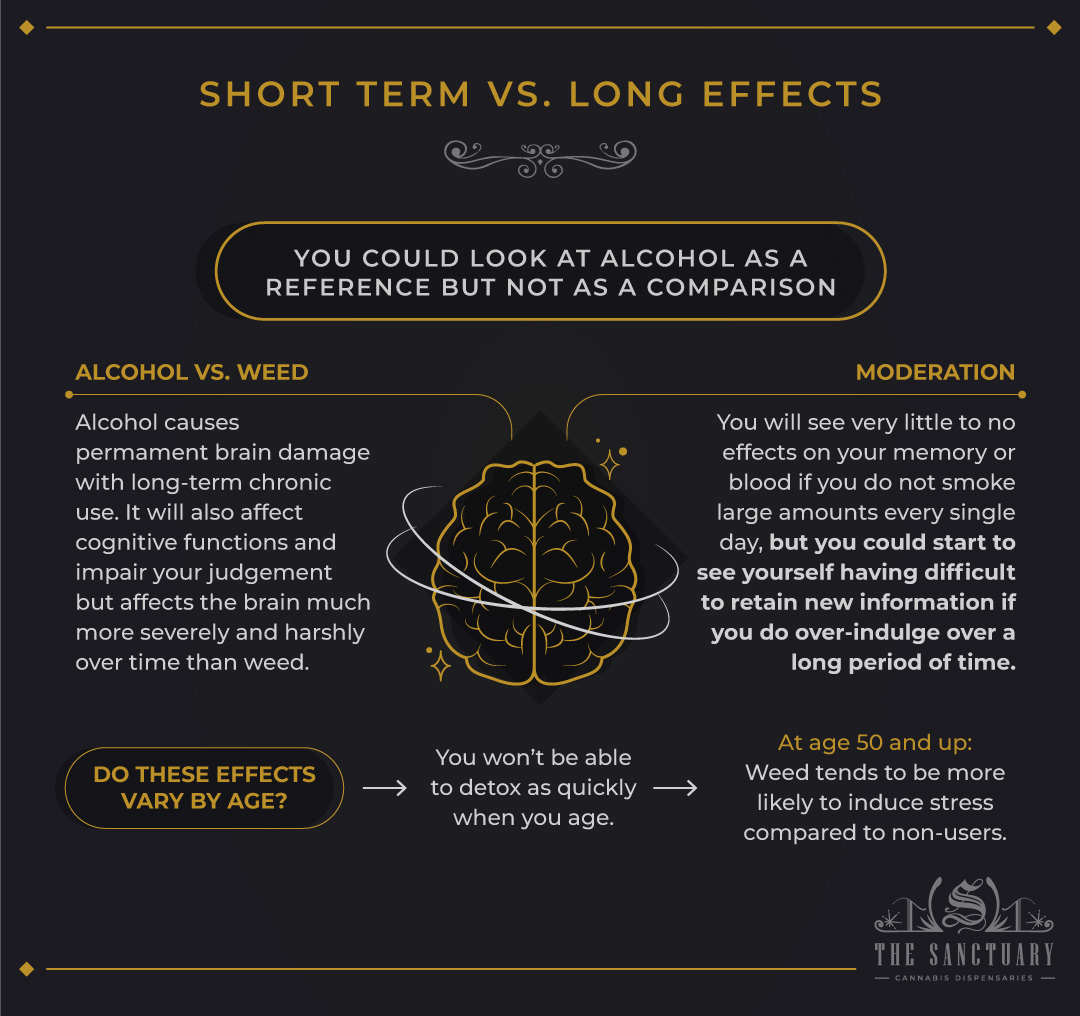 You could look at alcohol as a reference but not as a comparison since alcohol has different side effects than weed, and causes permament brain damage with long-term chronic use. In use as a reference, alcohol will also affect cognitive functions and impair your judgement but affects the brain much more severely and harshly over time than weed.

Moderation is the key to everything: You will see very little to no effects on your memory or blood if you do not smoke large amounts every single day, but you could start to see yourself having difficult to retain new information if you do over-indulge over a long period of time.

Do These Effects Vary by Age?

Yes, like most medical treatments or conditions, marijuana use can vary by age.

In general, things tend to slow down and weaken as you get older so you won’t be able to detox as quickly when you age. At age 50 and up, weed tends to be more likely to induce stress compared to non-users.

A possible factor could be the mix of medicine for other cognitive conditions, which is why you should always talk to your doctor before you even think of self-medicating.