When Was Weed First Smoked?

By The Sanctuary Editorial TeamLast updated on April 22, 2022No Comments

Cannabis plants may not have always existed as a means to get high, but when you even mention the word “weed” or “cannabis” today, it is almost entirely attached with consumption for many reasons (new forms of weed, legalization, growing cannabis culture, rise of cannabusinesses, etc). With the general increase of weed use year after year, you might be curious to know exactly where it all got started.

With how long weed has been around for any feasible use, weed has literally been around for as long we can remember (just about as long as we have recorded history). So the question is, when did weed first become the smokable delicacy we know today? We know that weed (hemp) has multiple uses as a production material, but when did it join the likes of sage or tobacco in terms of smokable plants? The answer obviously predates prohibition and modern cannabis culture, but the country of origin might not be what you expect.

What was the first recorded use of weed?

Whether it be for smoking or as a means of production, the earliest use of weed that we currently know predates biblical times by over half a millenium (you would think that would be enough time to learn what cannabis does before enacting prohibition, but we digress).

But yes, the first use we know of goes back almost 3,000 years to what is now present-day China: When the native inhabitants performed rituals that actually involved smoking to get high. So not only would you get to smoke weed outside, it would be completely legal and if someone asked you about it, you could tell them it’s for religious purposes. What a time to be alive!

Where was the transition to medicine?

While some of the earliest recorded instances of smoking weed may have been inadvertently medicinal, the most notable transition from recreational (or spiritual) use to natural medicine may have been in early Eastern cultures (Central Asia, to be exact).

This is when weed started to move across territories (countries) and transition from a simple food crop to natural treatment for gout and malaria. From there, weed began to completely reemerge as a medicinal crop used to treat even more ailments like rabies and bronchitis.

Cannabis would even further develop as a medicine over the next several centuries but it would be cultivated for medicinal use here in the United States until around the 19th or 20th century.

When was weed first smoked? 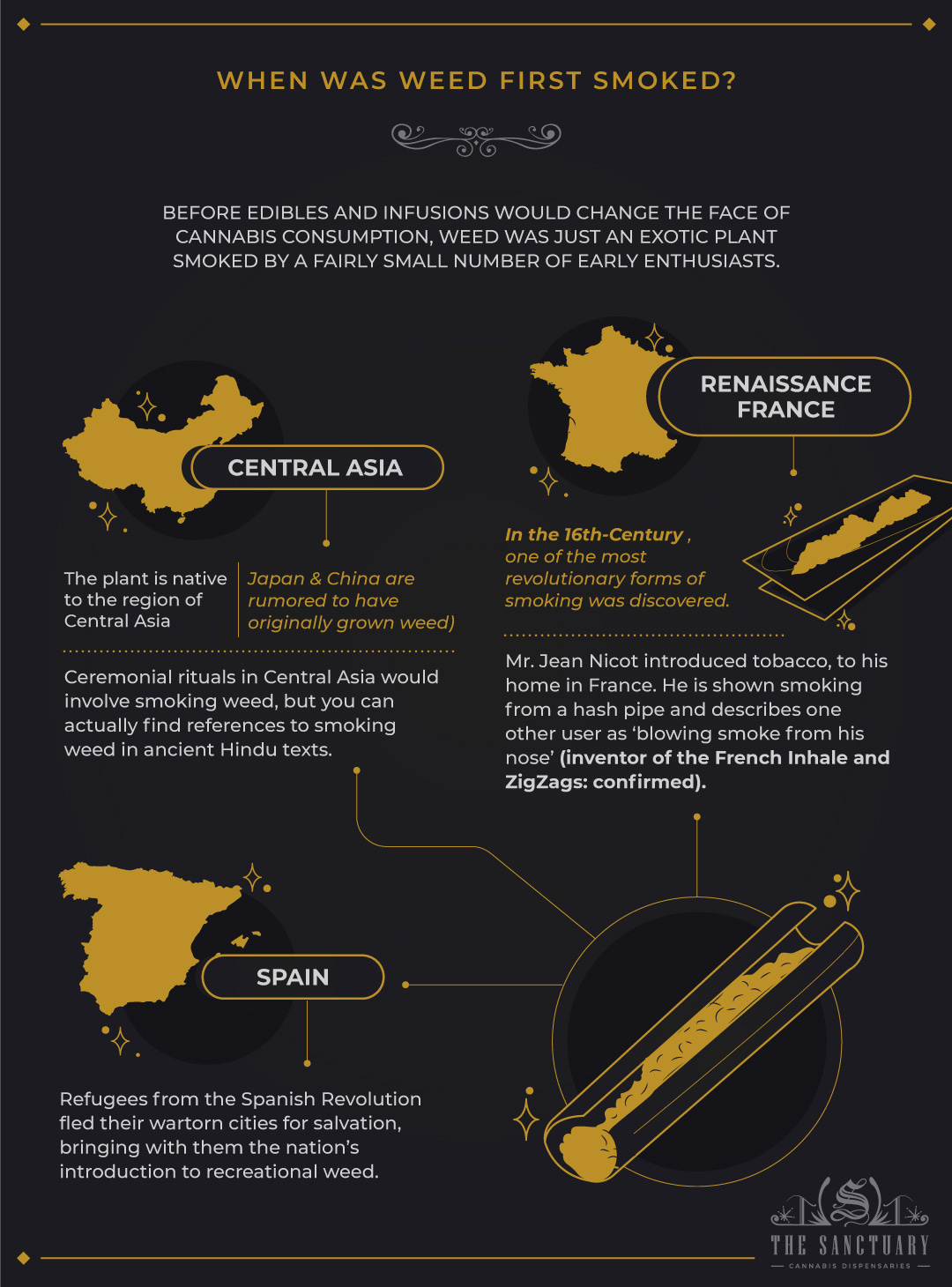 It may have been causally smoked for thousands of years but without instant communication, other parts of the world, different cultures would recognize it at different times. That was just the nature of things before immediate access to information.

Before edibles and infusions would change the face of cannabis consumption, and before cultivation built an entirely new industry, weed was just an exotic plant smoked by a fairly small number of early enthusiasts.

What better place to start than the very origin of cannabis? The plant is native to the region of Central Asia (Japan and China are rumored to have originally grown weed), which would naturally be where it was first harvested and eventually smoked. We mentioned earlier that ceremonial rituals in Central Asia would involve smoking weed, but you can actually find references to smoking weed in ancient Hindu texts.

As weed expanded outwards from Central Asia to the rest of the continent and later the word, multiple uses for weed had already started to be discovered and documented.

Taking a literal detour, we move over to 16th-Century France where one of the most revolutionary forms of smoking was first discovered.

It all began with Mr. Jean Nicot would introduce a then-unknown leaf from Spain, called tobacco, to his home in France. The famous depictions of said partake from 1650 even show him smoking from a hash pipe and describes one other user as ‘blowing smoke from his nose’ (inventor of the French Inhale: confirmed).

Now that we know that the French brought forth not only a new leaf (literally) to smoke with, but new ways to smoke, early smoke tricks and are also the inventors of ZigZags, it is entirely reasonable to consider France as one of the godfathers of cannabis culture.

However, that cannabis culture would not have kickstarted the way it did back in the 1910s, when refugees from the Spanish Revolution fled their wartorn cities for salvation, bringing with them the nation’s introduction to recreational weed. At the time, the refugees would make an infused drink called Potación de guayaya, obviously known for its psychoactive effects.

Ironically, smoking was seen as equally (if not, more) taboo in Mexico due to the ‘high’ being associated with the devil’s work. With their newfound sanctum in the United States, the few refugees who were smoking or consuming weed may have thought it would not get the same backlash here, but in under 30 years, the Marijuana Tax Act would pass, making all cannabis consumption illegal.

Why was Smoking Weed Made Illegal?

If you could ask the exact lawmakers in charge of prohibition exactly what made their decision, these would be the most likely factors: The (then) unknown side effects of smoking weed, no precedent of proper taxation, resentment of immigrants and everything associated with them, as well as false comparisons to alcohol (which was also outlawed but legalized shortly after).

What changed and made it legal?

In general, knowledge of the health benefits of weed started to open people to the idea of a new unorthodox medicine, but what really started the shift in culture and eventually law would be the counterculture of the 60s through the 70s.

Granted, the jazz musicians of the Harlem Renaissance did use it as a new means to partake, but one could argue that it was elevated in the 1960s with hippie culture, which included Woodstock. We may not have gotten weed legislation during this time, but it played a huge role in the media and politicians not being able to avoid it because of the spread of popularity.

What objectively made it legal was obviously the first lifting of cannabis restrictions in 2012, but that was the result of literal decades of late research to find that it is less harmful in moderation than most prescription drugs or opiates with satisfying effects in recreation.