Why Does Weed Make Me Cough?

There is no shame in this, as it happens to even the best of us: You take a huge hit from your apparatus of choice, wanting to blow out some O’s or a nice thick cloud until…that one tiny bit of smoke goes down a little too far, somehow feeling hotter than Hell’s ghost peppers, and you cough out all the smoke.

You might be asking yourself, “I know how to smoke a joint, so why does that happen?” Or if you are a newcomer to smoking weed, “Why does that happen at all? I thought you just coughed from cigarettes?” Both good questions, and thankfully, the answer does not reflect your technique or lack thereof, it is just something that happens fairly often across all users.

But what is it about weed smoke that makes you cough? Let’s break it down.

How to Smoke Weed

No matter which way you choose to smoke weed, and there are many different methods, any way can all be done safely and you can keep from coughing or over inhaling just by taking steady hits without huge clouds of smoke.

In short, doing bong rips might just be what you are looking for to reduce irritation and coughing as much as possible: Water bubbling cools down the smoke before you inhale, giving you a smooth hit that does not feel too hot and filters out some of the smoke.

But keep in mind: You are not by any means limited to just bongs if you want to smoke without coughing, this is just the most effective way to do that.

What is in Weed Smoke?

It can vary slightly depending on your strain or infusion, but in general, weed smoke contains carcinogens like nitrogen oxide and hydrogen cyanide, which are dangerous in large quantities and those quantities do not exist in a few puffs from a blunt or joint.

Why Does Weed Make Me Cough? 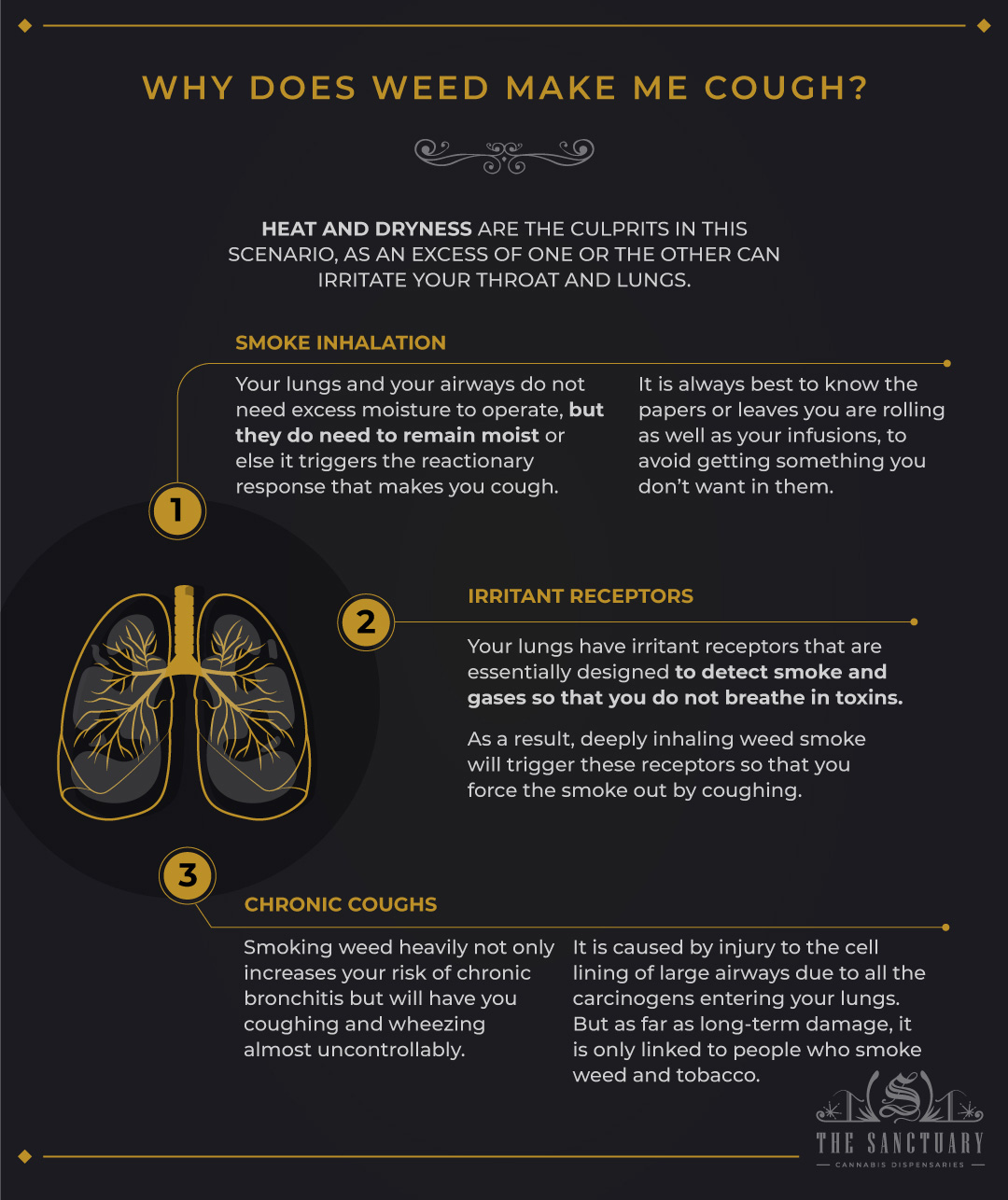 Heat and dryness are the culprits in this scenario, as an excess of one or the other can irritate your throat and lungs, causing you to cough uncontrollably (if it is bad enough). Both of these things will make you cough up a storm, but putting them together is hacking waiting to happen.

Weed smoke, and smoke in general triggers mechanisms that prevent irritation and foreign contaminants from entering your lungs with coughing being the natural way to get them out.

It should come as no surprise that breathing in smoke or just a dry substance of any kind will make you cough. This is because your lungs and your airways do not need excess moisture to operate (as a matter of fact, that is also detrimental), but they do need to remain moist or else it triggers the reactionary response that makes you cough.

The dryness or even coughing would be the least of your problems if the smoke was contaminated with harsh substances, meaning anything that is not meant to be inhaled or burned is already a detriment. This is obviously not the case with smoking weed, but it is always best to know the papers or leaves you are rolling as well as your infusions.

The human body has a number of different defense mechanisms and they are often in the form of receptors. Your lungs have irritant receptors that are essentially designed to detect smoke and gases so that you do not breathe in toxins. As a result, deeply inhaling weed smoke will trigger these receptors so that you force the smoke out by coughing.

The fact that this worked as a play on words was just a (planned) coincidence. But in short, smoking weed heavily not only increases your risk of chronic bronchitis but will have you coughing and wheezing almost uncontrollably: The kind of coughing thought to be exclusive to tobacco smokers.

An unfortunate reality for over 25% of heavy smokers, but a reality nonetheless, and it is caused by injury to the cell lining of large airways due to all the carcinogens entering your lungs. But as far as long-term damage to your lungs, it is only linked to people who smoke weed and tobacco while your chances of lung damage from just the occasional joint is essentially zero.

How to Prevent the Cough

As mentioned, just taking steady hits is the best thing that you can do while you smoke your weed. Not inhaling for too long or taking in a smoke cloud that barely fits in your mouth. You do not have to take cough syrup to stop yourself from hacking away, but drinking water before and after a smoke session will ease your throat and reduce your chances of coughing.

The same can be done by just taking smoother and smaller hits. You have probably seen people do a forcefully deep inhale when they joke about smoking weed, and you know that is not how it actually works because you would swallow the smoke.

If you are a veteran of puff-puff-pass, you should have no problem taking deep hits (every now and then) but keeping them short and exhaling quickly will stop the coughing and still give you what you want from your strain.

Should I not hold in smoke?

It will not actually get you higher, so it is unnecessary to hold in your smoke. Because cannabinoids, the active ingredients in weed, speed up absorption as bronchodilators, it defeats the purpose of holding in a cloud a smoke. While it may be necessary to hold it in for a second or two if you are trying to do smoke tricks, this will not work in getting more of a high.

But, you might be able to do that by just taking a bigger hit, but tread lightly if you are still new to consumption. As long as you expel it quickly, you should not have any problems with coughing.