Where Marijuana got the name ‘Pot’

By The Sanctuary Editorial TeamLast updated on April 26, 2022No Comments

We all know at least 5 different names for marijuana (that included), but it seems that one of its more popular nicknames among the media is pot. Admittedly, it is short, catchy, marketable and ‘pothead’ just rolls off the tongue. But it sounds more like a random word designated for the plant…Or so you thought.

Where or when exactly did marijuana don the name ‘pot’? Is it a mistranslation or does it have to do with its trade across countries? Surprisingly, it is an abbreviation of a term of Spanish origin that was later changed to fit an American dialect.

Where does it get the name Marijuana?

The plant has been around for a very, very long time but the name ‘marijuana’ is actually fairly recent. Cannabis is the scientific name for the plant, but when its earliest Chinese farmers cultivated ‘hemp seed flower’, they referred to it as such with their translation ‘ma ren hua’.

Broken Spanish (or technically, broken Chinese) would have the term phonetically changed to marijuana in 16th Century Mexico, where it faded in and out of obscurity until the 1930s: Around the same time ‘pot’ rose to cultural prominence. Later on, when ‘marijuana’ started to be more commonplace, it was ‘abbreviated’ as MJ in some circles, hence its other popular name ‘Mary Jane’ (popularized by Rick James).

The Rise of Cannabis Slang

If you really want to get technical, cannabis slang started in that aforementioned moment with Chinese cultivators. From that point on, different slang terms popped up here and there but the rise of cannabis slang would really kick off from the 1930s to this very day.

‘Pot’, weed and ‘marijuana’ would still be some of the most popular terms until anti-drug campaigns would plaster them all over U.S. media and hipsters across the Western world started coming up with code words from their respective communities.

Why is Marijuana Called Pot? 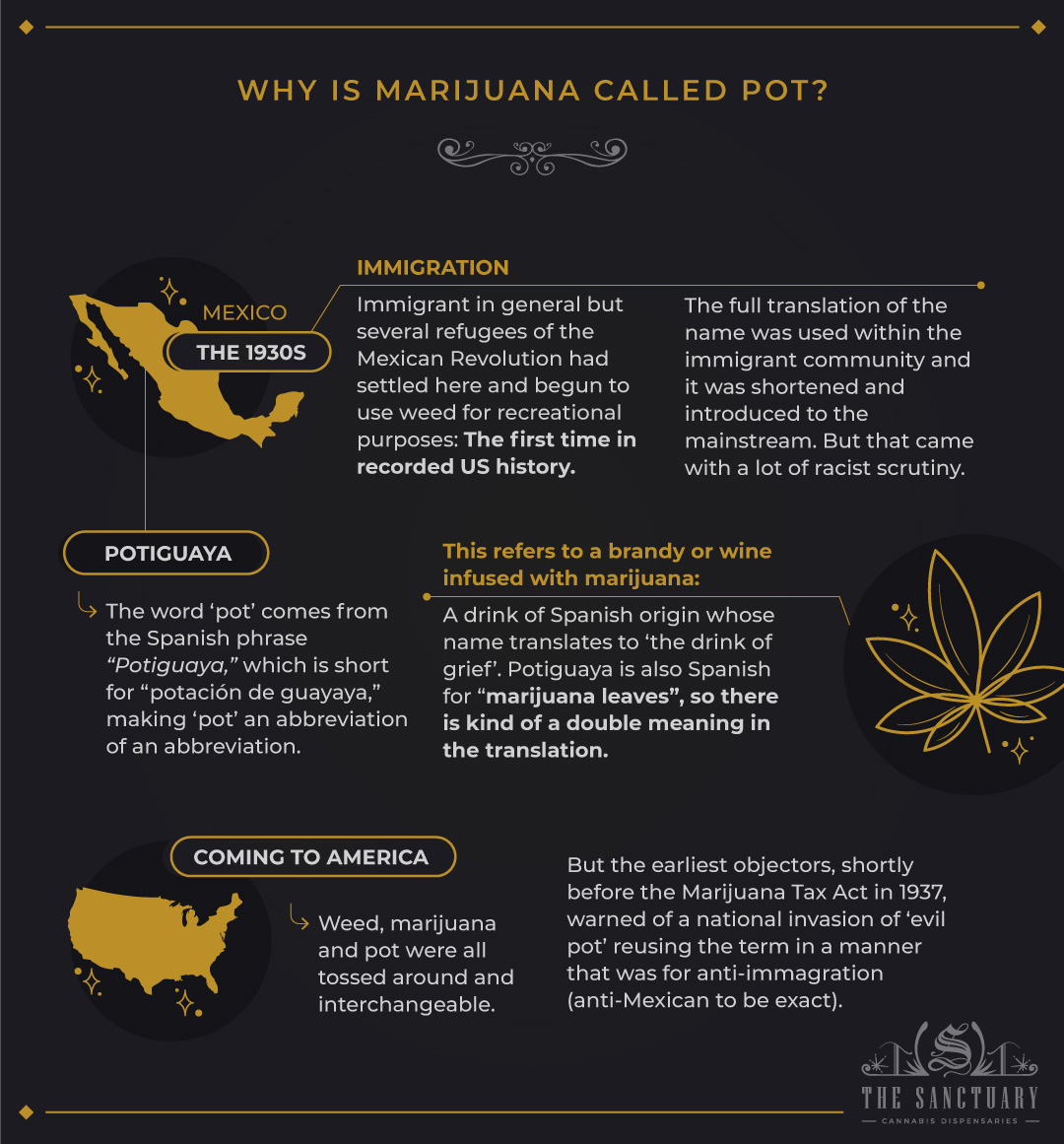 Again, as catchy as the name is, the word ‘pot’ does not seem to have anything to do with the plant, so why give it the name? As it turns out, it is not so much a mistranslation as it is an unfinished translation. Meaning: the name is missing context. To find said context, we look back nearly a century to when the plant was first brought to the United States.

Even before the 30s and the Great Depression, immigrants in general but several refugees of the Mexican Revolution had settled here and begun to use weed for recreational purposes: The first time in recorded US history. The full translation of the name was used within the immigrant community and as it expanded outwards, it was shortened and introduced to the mainstream.

Unfortunately, reaching said mainstream came with a lot of scrutiny, most of it being racist. Politicians like Harry Anslinger fought tooth and nail for anti-immigrant and anti-marijuana laws, resulting in ‘pot’ being made taboo across the country and peddled as ‘The Devil’s Lettuce’. Not to mention, Mexico had a popular term for the plant that would become the term ‘pot,’ so that was a very popular term to make these campaigns as derogatory to them as possible.

If you’re a fan of the movie Inception, you might get a kick out of this: The word ‘pot’ (as slang for marijuana) comes from the Spanish phrase “Potiguaya,” which is short for “potación de guayaya,” making ‘pot’ an abbreviation of an abbreviation. Mind. Blown.

Potación de guayaya refers to a brandy or wine infused with marijuana: a drink of Spanish origin whose name translates to ‘the drink of grief’. Potiguaya is also Spanish for “marijuana leaves”, so there is kind of a double meaning in the translation.

Given that the fear of a ‘refugee invasion’ fueled America’s fear of Spanish-speaking immigrants, that group would not easily latch on to the term ‘potiguaya’, so the abbreviation ‘pot’ became an (unofficial) name for the plant.

Not the Eddie Murphy classic, but when marijuana first came to the United States, there were some discrepancies about the name.

Weed, marijuana and pot were all tossed around and interchangeable, but the earliest objectors, shortly before the Marijuana Tax Act in 1937, warned of a national invasion of ‘evil pot’ reusing the term in a manner that was for prohibition and anti-immagration (anti-Mexican to be exact).

Where did ‘Weed’ Originate?

Returning to the 1930s (and 40s), the cultural explosion of the Harlem Renaissance was the birth of American art and history we still celebrate today, so it was already likely that ‘weed’ was going to be a part of that, and it was. Many of the great musicians of the time were struggling with alcohol, and with marijuana being rumored to be cleaner than tobacco and boost creativity without the risk of alcohol poisoning, a new after-show treat was brought to the mainstream.

Marijuana ended up with a number of slang terms just from the jazz era alone, including gage, reefer, jive and of course, weed (which was called ‘the weed’ at the time).

Is it more popular than ‘marijuana’?

Both names are very popular on TV and in some everyday conversations, even though marijuana is the more formal between the two just because it is longer. Because ‘weed’ is catchier and shorter, and because the iconic leaves look like weeds, that name has been widely accepted as the go-to, even though names like flower and ganja are popular today.

How many different names for Marijuana?

As many terms as we have covered in this article, we are not even in the ballpark in terms of the total number of names for marijuana. As of 2017, the total of slang terms across different cultures is said to be over 1,200. But even that is not it! Every individual strain has its own name, which adds another 2,300 to the list.

To help you visualize this insane number of marijuana names, assign one person to every individual name, and you would have enough people to sell out the House of Blues three times over. Needless to say, we have plenty of names and slang terms without having to stick to one.