The Cost(s) of Cannabis How Much Does Weed Cost?

If you are a seasoned veteran of the cannabis community, you are probably familiar with the pricing of your favorite products in your area, and those prices more than likely changed over the course of the pandemic. But how does that pricing change throughout the region and throughout the country?

You can compare the cost of weed in Nevada to other parts of the country and see a bit of a difference along the West Coast, but not nearly as big as compared to the East Coast. Regional supply and cost(s) of production are obviously indicative of price, but one of the biggest factors in the price of weed is its legality. Since 2010, the price has already been largely affected as more states legalize, creating costs that drastically vary from legal to illegal states.

How is Weed Taxed? 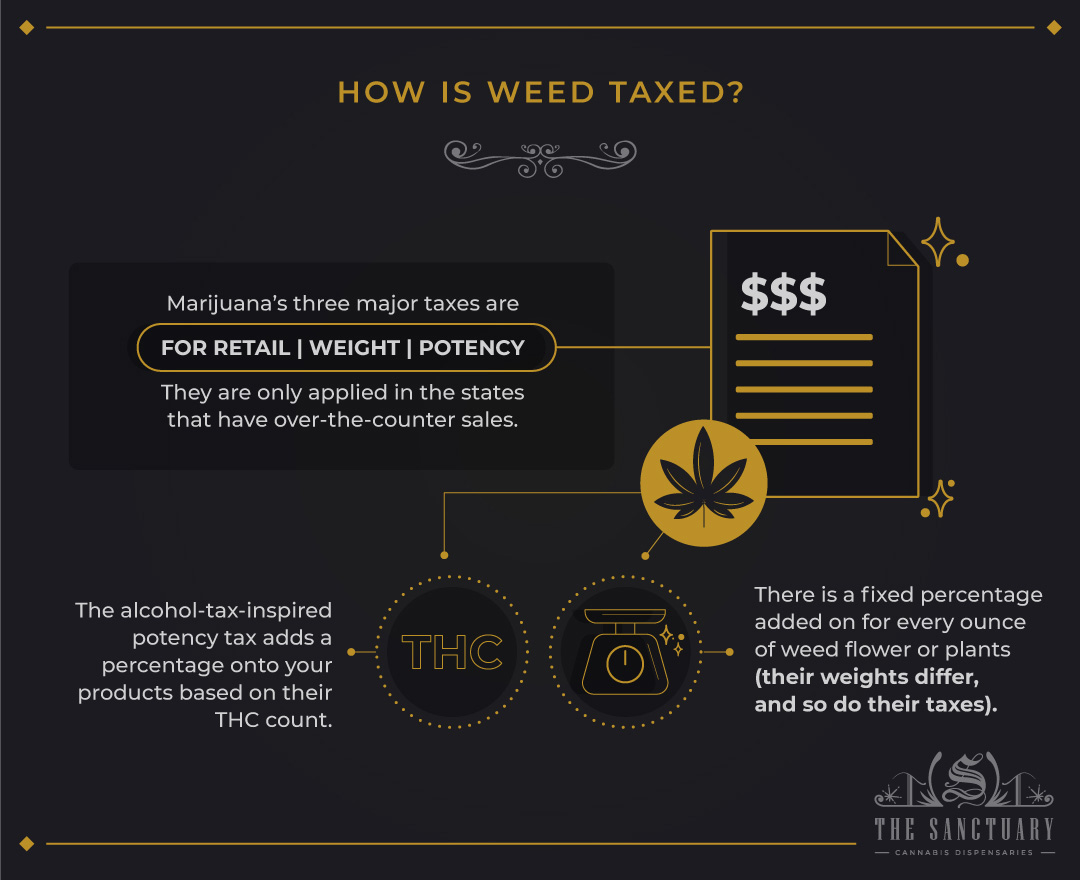 The easiest way to imagine how weed is taxed is that alcohol and cigarette tax laws apply to every sale (at least in concept). Marijuana’s three major taxes are for retail, weight and potency, and are only applied in the states that have over-the-counter sales.

Any sales of nearly any product in your state are subject to a sales tax (and weed is no exception), but the alcohol-tax-inspired potency tax adds a percentage onto your products based on their THC count. For example, weed in Illinois includes a 10% tax if your product has a THC percentage lower than 35%, but will add 25% to your price on those concentrates and strong, infused pre rolls.

Lastly, the third weed tax is similar to buying a pack of cigarettes in that there is a fixed percentage added on for every ounce of weed flower or plants (their weights differ, and so do their taxes). States have their own tax laws on weed since we cannot establish a federal tax.

Is it Taxed Everywhere?

Technically, no: It is taxed wherever weed is legally sold, recreational or medical, but it is only taxed in 9 states that allow these sales. The only outliers to this rule as of 2022 are Vermont, Maine and Washington D.C. where they sell weed legally without taxes.

How Much Does Weed Cost?

The early 2020s so far may have been a roller coaster for the cannabis industry in general, but it nonetheless makes the cost of weed noteworthy. In the decade since the country’s first legalizations, more and more states have followed suit, contributing to the steady decline in price across the board. Side by side, here is what that decline looks like:

These numbers represent a rough national average of all recorded costs of weed by state, compared to the most recent cost of weed by the start of this year. Interestingly, not every state has decreased in price (though the ones that have decreased by a notable margin).

Some parts of the country (specifically the West Coast) post-pandemic have seen prices increase due to much higher demand compared to 2019, but prices overall have been dropping due to market saturation and seasonal droughts, while the closing of dispensaries in 2020 pretty much dropped prices off a cliff from the sudden oversupply of flower.

When you look at the cost of weed throughout the US, you find that the national average for an ounce is about $319. That national average translates to about $11.19 for a gram of flower, $80 for a quarter and $40 to $160 for an eighth and half, respectively.

However, there are many factors of weed production to begin with, and the cost of all these different factors varying from state to state will give you a number of different weed prices throughout the US. This is represented by the table below:

Thankfully, in the Sanctuary’s home state of Nevada, weed consistently falls below the national average partially due to the relative ease of the supply chain (growing number of cultivators throughout the region). When this is not to your advantage, like in Washington D.C, the now-limited supply of weed and additional tax drives the price up to nearly double the average.

To simplify things a bit more, we are now going to break down the prices of popular cannabis products throughout Southern Nevada (where tourists can now buy and light it up). If you are planning a weekend in Vegas this summer, this should give you an idea of what you will pay as you galavant throughout the city of Sin.

For starters, let’s get right to the point and see what you will pay (on average) for fresh, premium flower throughout the city. Sales can pop up just about every weekend, especially holidays, but if you happen to not catch a deal, 1) Don’t buy a lottery ticket and 2) These are some of the average everyday prices that you would find in town.

Weed tinctures and seasonings can vary in price as well and they are amazing products, but if you are looking for the classic infused gummies or other sweets, then look no further.

There is no shortage of quality edibles or flower in today’s dispensaries, but say you are looking for something a bit stronger and more complex but is still THC. Concentrates or extracts would be the answer, and here is how much they normally run in Las Vegas.

The price of modern medicines (kind of) starts to make sense when you realize developing a new drug costs around $1 billion or more. Weed cultivation costs nowhere near that much (not even $700 an acre) and the average cost of an ounce still fails in comparison to out-of-pocket prescriptions for seniors over 65.

The recommended daily dose of all cannabinoids (both CBD and THC) is 60 mg/day, one single joint is usually a 2-day supply. One ounce of weed translates to 28,500 mg, which is well over a year’s supply. Today, the average American spends $1,200 a year on prescription drugs, compared to the ounce you bought of medicinal weed for less than $400.

A single dose of meds may cost less to produce than a dose of THC, larger quantities are significantly cheaper than traditional medicine.

How Do Legalities Affect Price?

The more you have of anything, the less it has in value. You may or may not have expected that same principle to apply to weed, but it absolutely does. Rejoice in knowing that because of legalization, weed has never been cheaper. Now that we do not have to worry about demand drastically outweighing the supply (for the most part), weed has become less susceptible to price gouging and has actually decreased in price over the last 10 years as a result.

The green stuff that you initially had to buy under the table for outrageous prices and threat of incarceration is now widely available and fully legal in almost half the country. Now that it is not in that same kind of short supply, that’s reflected in its new pricing.

What Did Weed Cost Before it was Legal?

If you were under the legal consumption age when it was first legalized anyway, you might not remember how much weed cost prior to 2012. But in actuality, it was a lot more expensive than it is now, almost $30 a gram. Of course, it was not impossible to buy cheap, imported weed before the first states legalized it, but you would have definitely traded quality for the lower price.

Medicinal weed may be higher than the average in non-legalized states, but recreational products have become affordable for nearly every consumer.