How to Sell Weed Legally?

Most people that have used cannabis have considered selling it at some point. What is to stop you? When the standard 9 to 5 job is not providing enough money, it sounds like a wonderful way to make some side cash.

It is also a relatively simple task and you will meet a lot of interesting individuals. So, what is the issue with selling in areas like California, especially now that growing your own cannabis is legal in that state and many others?

If you have been cultivating weed and wondering how you could ever get through your crop, you have probably considered selling it. After all, growing it requires money, and let’s face it, you could probably use the reimbursement for your expenses.

However, chances are you have never attempted to sell weed before and have no clue where to begin. Unfortunately, even in places with cannabis legalization selling is not an open market.

If you want to make money selling cannabis, the first thing you need to do is check your state’s existing laws on weed production and sale.

The entire United States used to have laws that were quite severe in regards to the sale, production, and use of cannabis, but it is getting softer in recent years as more states have legalized the sale and consumption of cannabis.

However, even some states that have legalized cannabis in some form may prohibit their residents from selling to each other. This is often because some states may want all cannabis sales to be done through established enterprises in which the tracking of sales can be collected and therefore monitored.

Can I legally sell to another person? 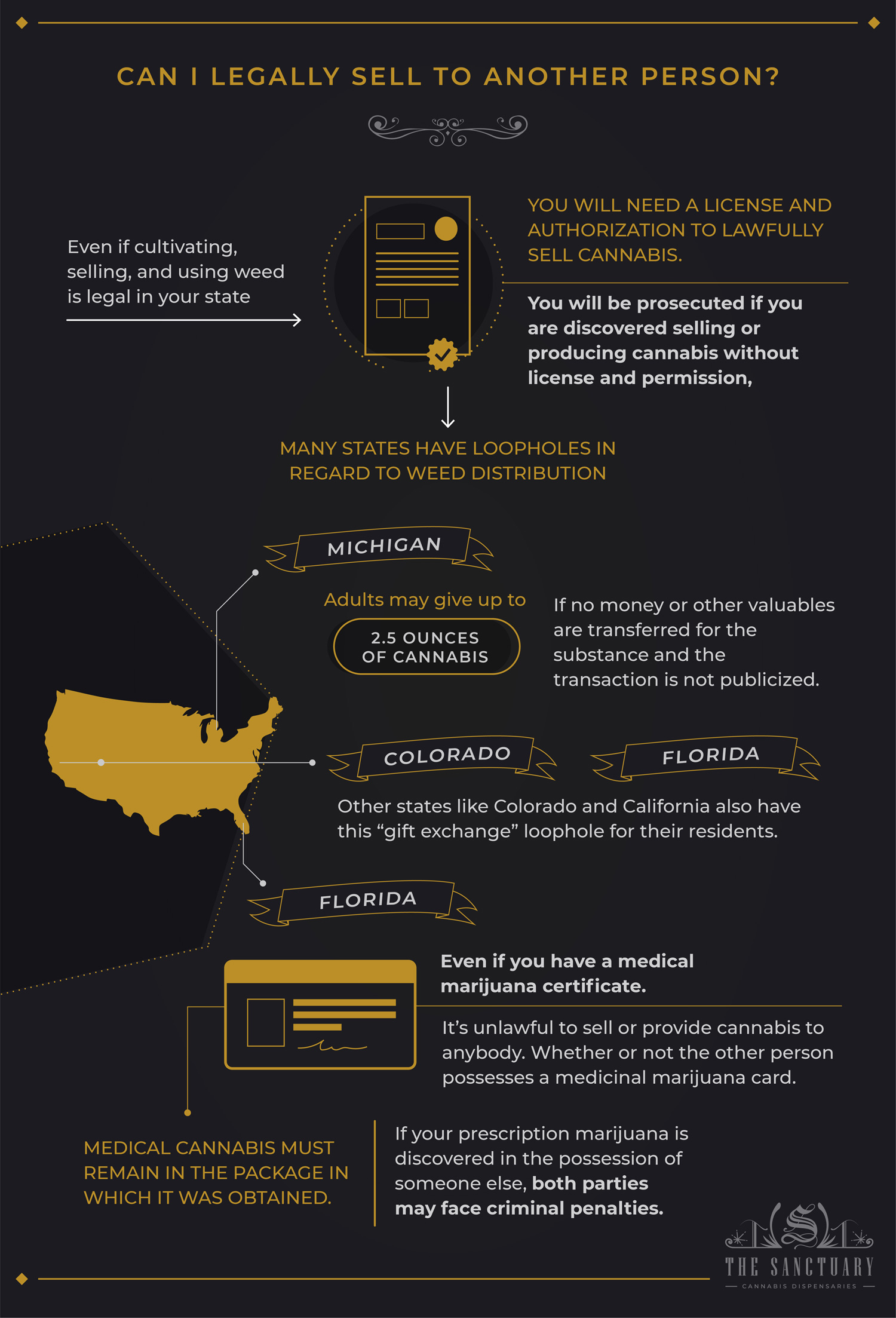 Even if cultivating, selling, and using weed is legal in your state, you will need a license and authorization to lawfully sell cannabis. To obtain the appropriate license and permit, you must contact your local government to find out the appropriate steps.

If you do not have the license and permission, you will be prosecuted if you are discovered selling or producing cannabis.

Many states have loopholes in regard to weed distribution. In Michigan, adults may give up to 2.5 ounces of cannabis to another adult if no money or other valuables are transferred for the substance and the transaction is not publicized.

In other words, the transfer must be a bona fide gift. Other states like Colorado and California also have this “gift exchange” loophole for their residents.

In Florida, even if you have a medical marijuana certificate, it remains unlawful to sell or provide cannabis to anybody. Whether the other person possesses a medicinal marijuana card is irrelevant.

Medical cannabis that is properly handled must remain in the package in which it was obtained, according to Florida marijuana regulations. If your prescription marijuana is discovered in the possession of someone else, both parties may face criminal penalties.

According to Florida marijuana regulations, delivering less than 20 grams of marijuana is not a crime, but rather a first-degree misdemeanor punishable by up to one year in county prison and a $1,000 fine.

How to sell weed to dispensaries

A grower selling their product to a dispensary is not as simple as it appears in the context of how to sell cannabis goods to dispensaries. To begin, you will need a license to cultivate and sell your commodity. Your state or county legislation will primarily decide this.

These licenses might differ based on where you reside and where you plan to sell your weed.
Most home growers who are not producing for personal consumption could aim to produce enough high-quality cannabis to sell to dispensaries.

These days, the largest purchasers are the medical and recreational dispensaries that are all over the legal market, therefore this is where you could make the most money.

Selling cannabis to dispensaries is a highly regulated procedure with a lot of red tape to go through. Most dispensaries that are searching for cannabis producers want someone with a botany or horticulture degree.

Even if you have not finished your degree, you can still work as a grower. Simply begin by working for an established cultivating firm until you have proven yourself capable of growing on your own once you have obtained a grower’s license.

Dispensaries wanting to collaborate with growers will want you to have some past knowledge and experience producing cannabis, even if you have a degree in horticulture or botany. This is because of their desire to cut costs and recruit growers who will not require considerable training to get started.

To become eligible to sell to dispensaries, you first need to obtain a license. Until you have one, dispensaries will not come near you. You will also need to make sure that your grow complies with your state’s regulations in terms of pesticides.

Selling your cultivated weed to a dispensary is a fantastic aim, but it is a tall order. Only growers who have been doing it for a long time are likely to pass the licensure and regulations. It can take many years before you have the abilities and wherewithal to sell your weed to a dispensary.

How much do growers make selling to dispensaries?

This can vary heavily according to the laws, grower’s experience, and location. In the United States, an entry-level grower’s base income ranges from $50,000 to over $100,000, although it may be much more depending on the criteria listed above.

In California, a wholesale legal pound sold for $3,400 in the legal market in October of 2020. This will rise over time and will fluctuate based on availability, demand, and quality, not only in California but also in other states.

As a result it is hard to set a fixed price for supplying cannabis to dispensaries, yet it is a profitable and expanding business as long as you can get your foot into the door.