How much Weed can I legally carry in California?

Anyone who is passionate about the cannabis community, not just for the product but for the people and the culture, knows that living somewhere without legalization is a nightmare. Thankfully, over half of the United States has since legalized cannabis for recreational use, with places like California leading the charge.

Where dispensaries now dominate arts districts, medical cards ease in accessibility and health benefits continue to be discovered, it is still important to always be aware of your environment and know what you can or cannot do with cannabis in your travels.

Even if you do not plan on traveling soon, you need to know how much you can carry around your city to avoid any sort of legal trouble. For today, we’re specifically looking at California’s weed laws to determine how much is too much.

Even though recreational weed was not approved until 20 years after medicinal use, California has become one of the, if not the, largest hub for weed smokers in the country.

Recently quoted as the world’s leading market of legal cannabis, California also has a history of the green stuff that stems from the hippie culture of the 1960s. Cannabis has since become synonymous with both West Coast hip hop and California as a whole, with it already being an epicenter of counterculture.

While you cannot just smoke anywhere you want in the state, you can still legally own up to 28.5 grams of dried weed, so long as you do not carry all of it out in public (only one ounce allowed in your travels). As an added bonus, growing is legal in California to the point where you can grow up to 6 adult plants at one time, all of which are legal even without a medical card.

How much weed can I carry in California? 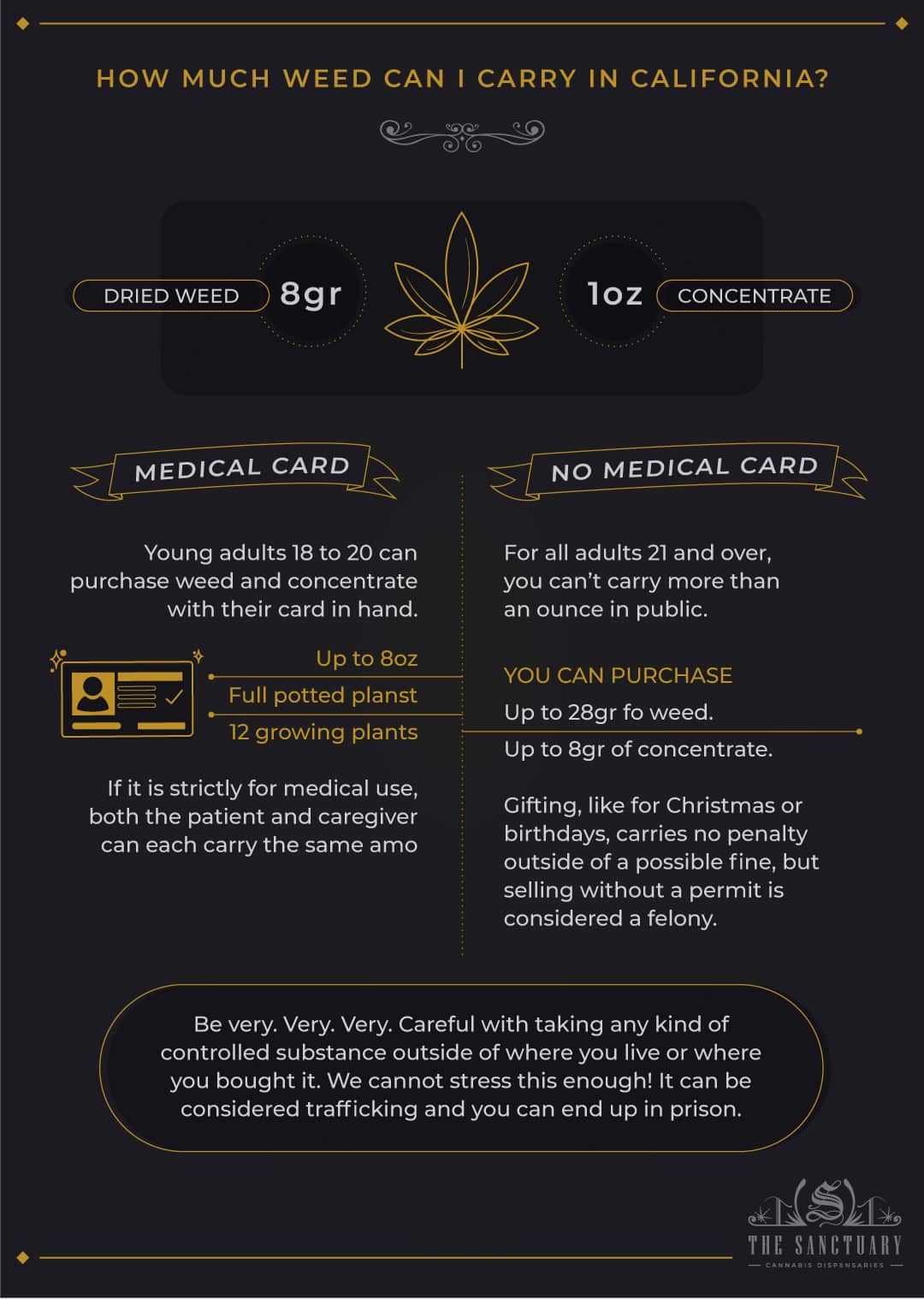 California does the best they can while still technically under federal law, so it is no surprise that the Golden State allows you to carry some of the most weed in the United States. Specifically, up to one ounce of dried weed or 8 grams of concentrate.

Honestly, if you know your measurements, then this should be plenty. One ounce alone can load up almost three dozen 1g joints. So say you were traveling anywhere in California and a cop stops you: You just happen to have a full ounce with half a joint a friend left in your car.

This would more than likely land you in hot water in other states, but California has such an instance down to a misdemeanor: 6-month sentences and small fines, if you had intent to distribute the whole lump sum. Juveniles would get a max of 10 days for the exact same crime.

The legal to buy and smoke weed, in general, is 21 unless you have a medical card. In this scenario, young adults 18 to 20 can purchase weed and concentrate with their card in hand.

From there, patients with medical cards can carry just about the same amount of weed plants as recreational users can: up to 8 ounces or 6 full potted plants or a dozen growing plants. Should this be strictly for medical use, both the patient and caregiver can each carry the same amount.

If you are like the majority of a dispensary’s everyday shoppers, you might not have a medical card and just want to smoke some for the hell of it. That is pretty much why they exist!

For all adults 21 and over, California allows you to purchase up to 28.5 grams of weed and up to 8 grams of concentrate, you just cannot carry more than an ounce with you in public. As we mentioned, carrying more than an ounce for personal use is a misdemeanor in California, but the intent to distribute could mean serious jail time no matter how much it is.

Gifting for example, like for Christmas or birthdays, carries no penalty outside of a possible fine, but selling without the proper permits, even if you are within the legal carrying limit, is considered a felony. You could go to jail for 5 years, and much longer if you try to sell to minors.

How much can I travel with?

Be very. Very. Very. Careful with taking any kind of controlled substance outside of where you live or where you bought it. We cannot stress this enough! The reason why is because you really do not want to end up in this scenario:

You are at the airport about to fly from Cali to Colorado or anywhere in the country (any state where weed is legal or not does not even matter). Upon scanning your bags through TSA, they discover the ounce you got on sale the day before…You are attempting to fly a federally illegal drug across state lines, also known as drug trafficking.

So which would you rather have? A weekend without your stash or 25 to life and half a million in fines with only a slim chance of parole?

Why trafficking is such a hefty charge for a small amount of weed is that the second you set foot in an airport, no matter where you are, you are now under federal jurisdiction instead of your own city’s because the airport is owned by a government entity. Not to mention, those TSA and DEA are literal government agents on standby and surround you all throughout the premises.

Where can I consume in California?

Thankfully, and what arguably solidifies California as the smokers hub, are the consumption lounges. All throughout the Golden State are lounges and cafes where you can get your fix of THC while trying new strains and smoke outside of your home or hotel room. Yes, that does mean that some also serve food: You may very well just find a new home there!

It may be legal and arguably encouraged in the Golden State, but they do not let you smoke anywhere that does not allow weed, which still includes hotels, beaches, parks, movie theaters and just about any restaurant outside of consumption lounges or cafes. That aside, California remains a cannabis epicenter with decent laws protecting your right to own and travel with a reasonable amount of cannabis.