Smoke tricks are a great addition to a little something to your smoke circle and show off to your friends. Even better is that most of them are fairly easy, usually only taking a couple of tries to get right, and among the easiest is the Ghost Inhale.

If you really only take a few minutes to try it with a few clouds or puffs of smoke, the Ghost Inhale is not only one of the easiest smoke tricks but it has a very unique look and it is arguably one of the most satisfying. Nothing quite exceeds the perfect puff ball of smoke dancing in front of your face as you do the trick. The Ghost Inhale may be easy enough to learn right now but it looks cool enough to want to share every time you smoke.

What is a Ghost Inhale?

In simple terms, the Ghost ‘Inhale’ is where you take a large puff of smoke, blow it out into a thick, ghostly-looking cloud, and breathe it back in (the quotes around ‘Inhale’ because you are less inhaling and more ‘gathering smoke in your mouth and letting it rest).

The perfect cloud for this trick almost looks like Casper or a bedsheet ghost. Then when you breathe it back in, the smoke looks like it took shape, escaped your mouth, and quickly flew back into your mouth and lungs. Spooky, huh?

Is this Different from a French Inhale?

The two smoke tricks are very similar with the only key difference being that you release smoke into your nose with the French Inhale, whereas the Ghost will just have you blow it out and back through your mouth.

Technically, you could combine the two (the French Ghost is a pretty cool name), and take a big rip from your roll or device, let it cloud and then breathe through your nose like a French Inhale. Keep in mind: You do need quite a lot of smoke for the Ghost Inhale and may or may not want to blow all of that into your nose, so try at your own risk. 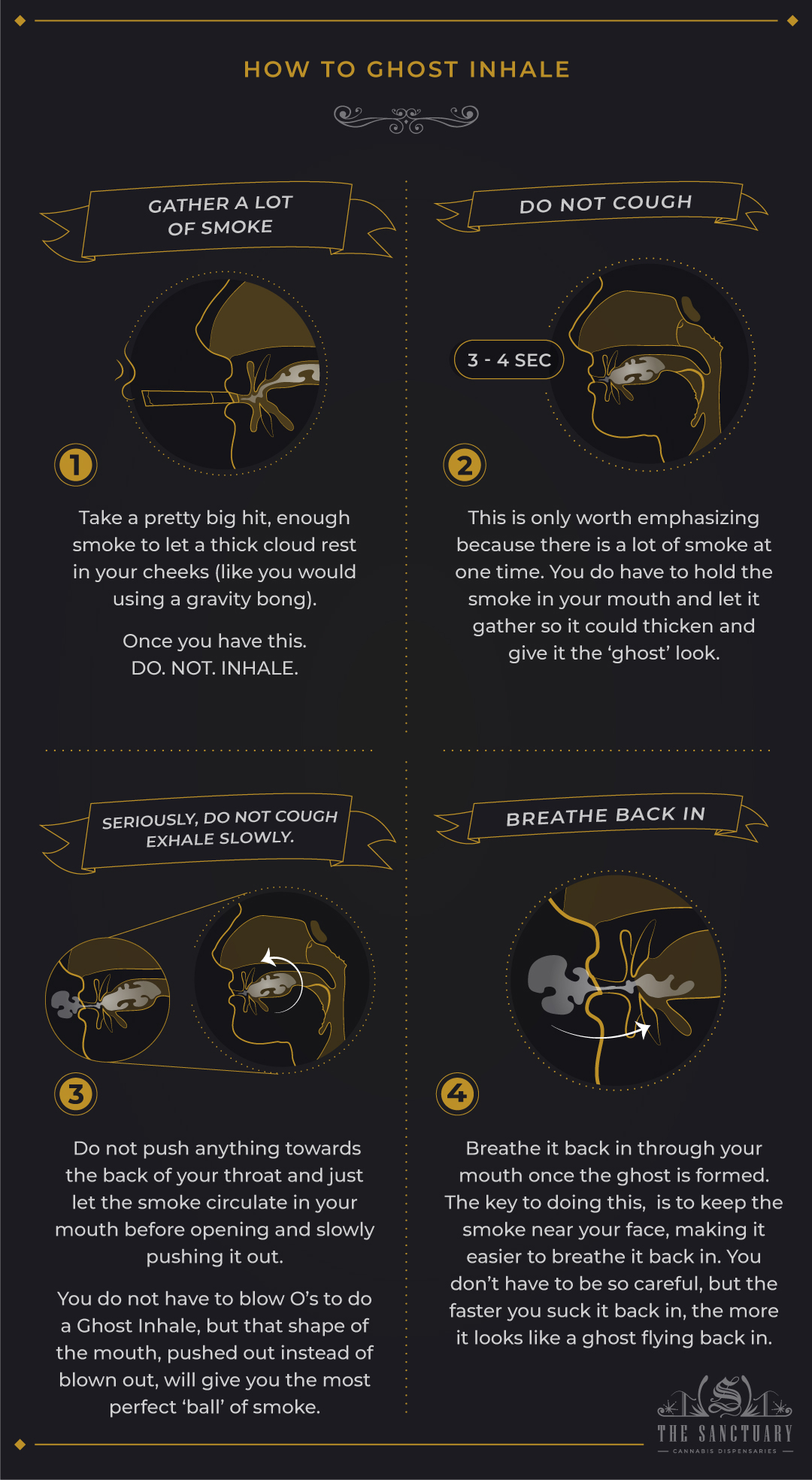 The basic idea is to have a big enough cloud of smoke to look ‘ghostly’ and suck it back up before blowing it out: Do it right and it will look like a ghost flying in front of your face.

Whether it is smoking, vaping, dabbing or hookah, the Ghost Inhale can be just as easy as taking a hit and gently pushing it out of the ‘O’ shape of your mouth.

Step 1: Gathering A Lot of Smoke

The best step of learning this trick by far: taking a pretty big hit. You do not have to inhale the entire joint in one go, but you do need enough smoke to let a thick cloud rest in your cheeks (like you would using a gravity bong).

Once you have this, Do. Not. Inhale. We know you are supposed to blow the smoke out regardless, but not only would you ruin the trick, you would be breathing an excess of hot smoke into your lungs. No permanent damage if this happens once or twice accidentally, but it is best to avoid it whenever possible.

Step 2: Do Not Cough

This usually goes without saying, but for the Ghost Inhale or just any smoke trick in general, this is crucial. Also, this is only worth emphasizing because there is a lot of smoke at one time, it might be hot (though this sort of depends on what you are smoking), smoke might slip down the wrong pipe if you let it sit for too long in your mouth, etc.

You do, however, have to hold the smoke in your mouth and let it gather so it could thicken and give it the ‘ghost’ look, but if you take your hit steadily and let it cloud for about 3-4 seconds, this should give you the best result.

Why is this emphasized again? Because it is that important. Obviously.

Understandably, not every hit is perfect and those less-than-perfect ones can spell disaster for your smoke tricks, but they are easy to avoid: Do not push anything towards the back of your throat and just let the smoke circulate in your mouth before opening and slowly pushing it out.

You do not have to blow O’s to do a Ghost Inhale, but that shape of the mouth pushed out instead of blown out, will give you the most perfect, aesthetically pleasing ‘ball’ of smoke that your OCD will thank you for. Let this perfection of smoke be your ‘ghost’.

Step 4: Breathe Back In

The last step is basically the easiest besides taking the hit, and that is breathing it back in through your mouth once the ghost is formed. Technically, you already have the trick down but this is like the bow on top to make it look like a ghost flies into your mouth, and puts the ‘inhale’ in Ghost Inhale.

The key to doing this, and why you push the ghost out slowly in the previous step, is to keep the smoke near your face, making it easier to breathe it back in. You do not have to be so careful with this breath since it is the last step, but the faster you suck it back in, the more it looks like a ghost flying back in.

There is no easier way to practice than to just keep trying. The Ghost Inhale is still a far cry from that crazy move you saw in a Jackie Chan movie, so no worries about having to ‘train’ to get it right. Long story short: Take a few puffs until it looks the way you want.

The best place to practice would be anywhere with good ventilation, no draft or breeze and does not mind the aroma: So, pretty much anywhere in your house (so long as your housemates do not mind). Even if you do not get that perfect Ghost Inhale on the first try, you would be surprised by how fast you pick up on the trick: it really is that easy.