How to Hide the Smell of Weed?

By The Sanctuary Editorial TeamLast updated on November 9th, 2020No Comments

The smell of weed is notoriously strong and unmistakable. And while most cannabis users will say they love it, many people try to conceal it. This can be because cannabis is still illegal where they live, or because they do not want to bother others or attract unnecessary attention.

When your weed has a strong smell, it is often the sign of a high-quality strain. Smell is a peculiar thing. If you become accustomed to a scent, you stop noticing it. This can lead to a social faux-pas when your clothes have absorbed the smell of cannabis.

You may not catch the dank scent, even though it is incredibly distinctive to other people. And these people could have unenlightened attitudes towards cannabis users. Maybe that is not a concern to you, but what about the law?

Depending on where you live, there could be severe consequences if law enforcement notices a cannabis smell on your clothes, in your car, or at your home. 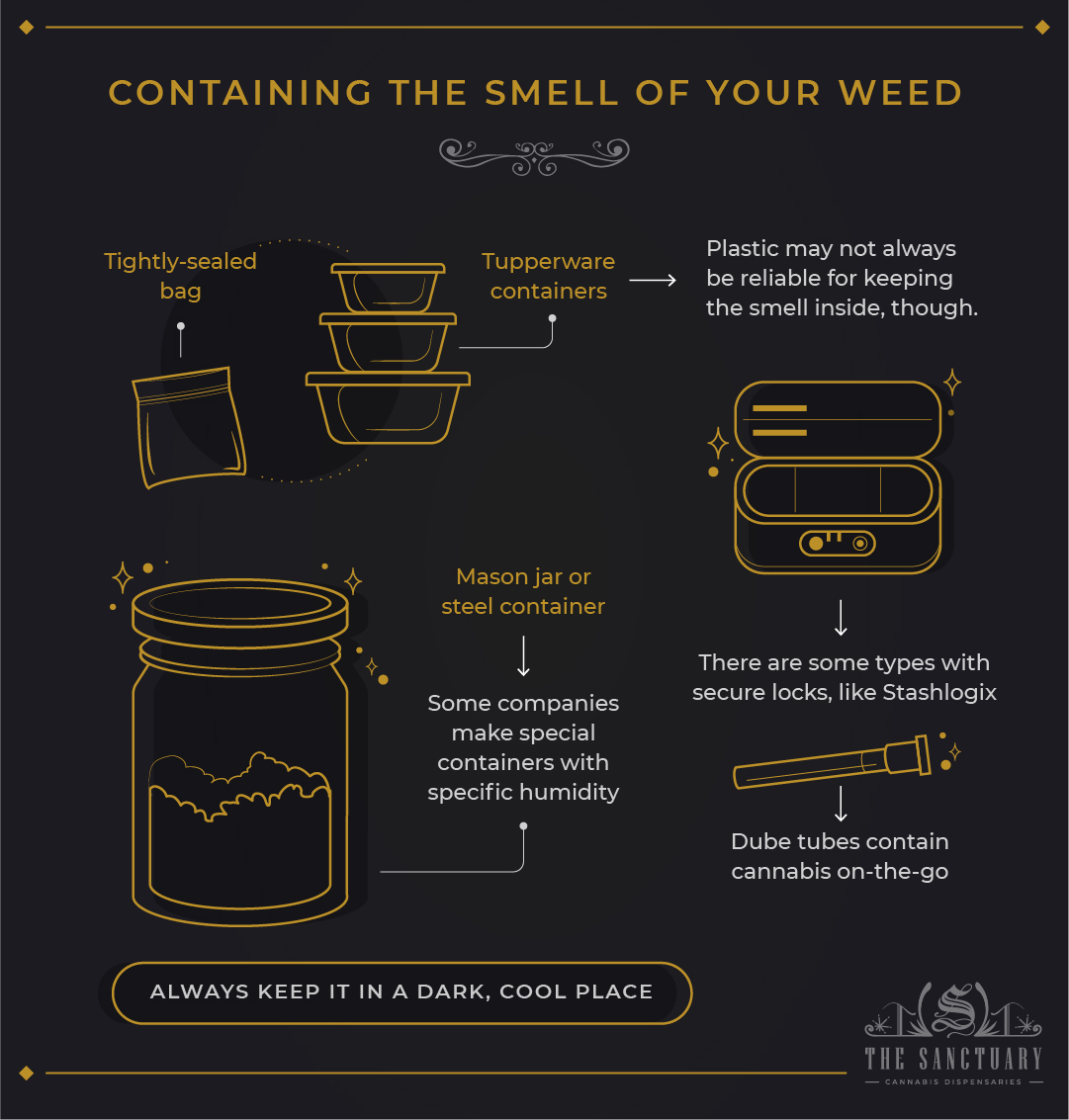 Containing the smell of your weed

If you store cannabis for the long-term, you will want to invest in good containers. An air-tight container keeps the freshness in. It should isolate the fragrance from the outside world, too. You have many options ranging from tightly-sealed bags to Tupperware containers. Plastic may not always be reliable for keeping the smell inside, though.

A glass container like a Mason jar or a steel container like a coffee can will be better. There are even companies that have specially developed containers with precisely regulated humidity levels, such as Boveda.

There are also types with secure locks, like with Stashlogix. Whatever your storage method, a dark, cool place is where you should be keeping it.

There are also products designed to contain the smell of cannabis on-the-go. Dube tubes are perfect for carrying pre-rolled joints or blunts around.

If you are really worried about keeping your cannabis use discreet and minimizing the smell when you use it, we suggest you invest in a vaporizer. Not only will you avoid many of the health risks associated with smoking, but you will also get the most out of your weed and produce much less odor.

This is because vaporizers do not combust cannabis. Instead, they heat it to just the right temperature to extract the maximum amount of cannabinoids without actually “burning” anything.

Plus, the vapor produced by a vaporizer has a much less potent odor than that of a joint or bong and also just smells a lot better.

Towel under your door

If you are trying to hide the smell of a session, the first step you want to take is putting a towel down in front of the bottom of the door of the room you are in. Even grinding your weed, dabbing, and vaping is detectable on the other side of an untoweled door.

If you do not want anyone outside of the room to know what you are up to, a towel is necessary.

Just dampen a towel and use it to fill any gaps between the floor and door. This will work with most doors but some have large enough cracks in the sides of the door to allow smoke to seep through anyway.

Smoking in your shower

Another method is to smoke your cannabis while the shower is running. Turn the shower to maximum hotness; creating steam is the primary goal here because the smoke smell will dissipate along with the steam being sucked into your bathroom fan. This is traditionally called a “Hawaiian Hotbox.”

A sploof is a home-made device designed to make the smell of weed smoke turn into the smell of fresh laundry. You can make a sploof with a finished paper towel or toilet roll filled with dryer sheets. One end should have a dryer sheet rubber banded or taped on.

They are simple to use. You just blow your hit through it and preferably out a window for even further precaution. There are also products filled with activated carbon that will filter second-hand smoke like the Smoke Buddy and Sploofy.

One hitters and small pipes

Smaller pipes are a great alternative to bongs and joints because they produce noticeably less smoke. So, if you are trying to conceal the fact that you use weed, make sure to invest in a small pipe and keep it on you for discretion.

One hitters are another popular alternative. These are slim pipes with a tiny bowl that has just enough space for one hit of cannabis. There should be no cherry (continuously burning weed) and nothing but ash left by the time you are done inhaling.

One hitters come in a variety of shapes and styles, but some of the most common ones are actually shaped like normal cigarettes for extra stealth points.

Vinegar can do wonders when it comes to cleaning your house, but also it’s very useful for eliminating odors. The smell of vinegar is not as pleasant as you might expect, but it wears off after an hour or so, taking the cannabis smell with it.

To use, boil a cup of vinegar in a saucepan on your stove until the smell spreads throughout the room and masks the weed odor.

Well known for absorbing smells, baking soda is a great thing to have on hand. Chances are it is already in your home. You can simply add a few inches of baking soda into a shallow, wide box or dish and leave it in the room for a few days.

It will take some time to absorb any odors, so it is not a bad idea to just keep a dish in the room before, during, and after smoking.

Having enough ventilation so the smoke has somewhere to go will dramatically prevent it from lingering on you, the furniture, and walls.

Open a window and point a fan at it so there is some airflow. Just make sure if you live in an apartment that you are not blowing the smoke into your neighbors.

It is good practice to at least wash your face and hands after smoking, but it is best if you can take a shower and wash your hair as well because the hair will probably absorb most of the weed smell.

If you do not have time for a shower, use odor-neutralizing sprays and at least change your wardrobe. And make sure you wash the clothes you wore while smoking as soon as possible.

It is also recommended to brush your teeth or chew gum. 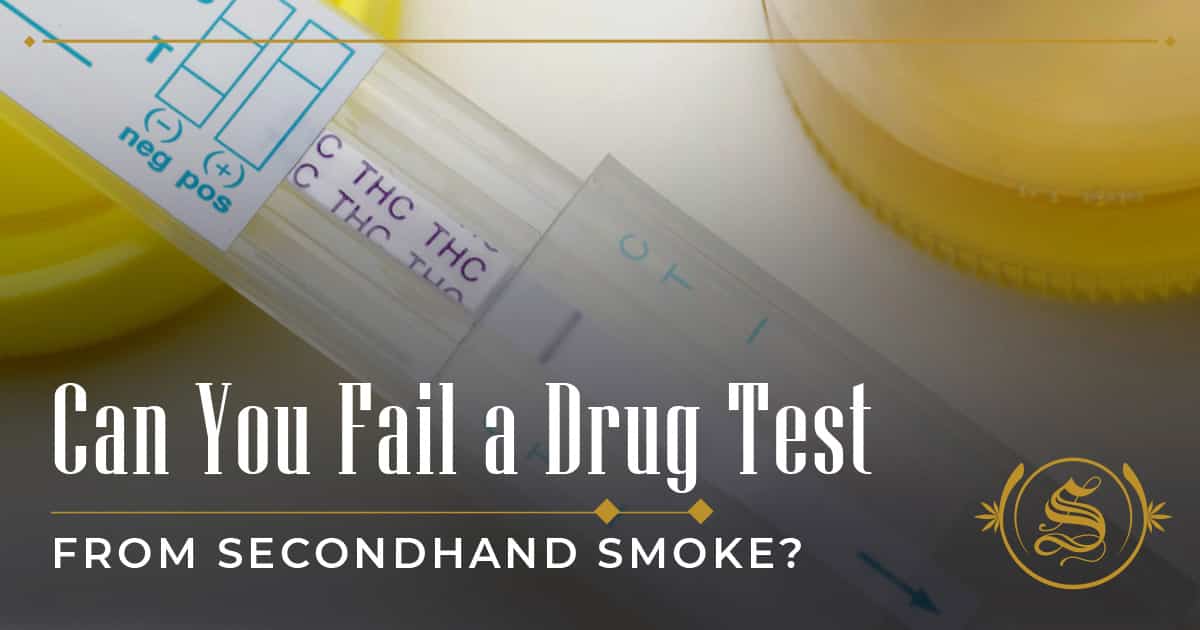 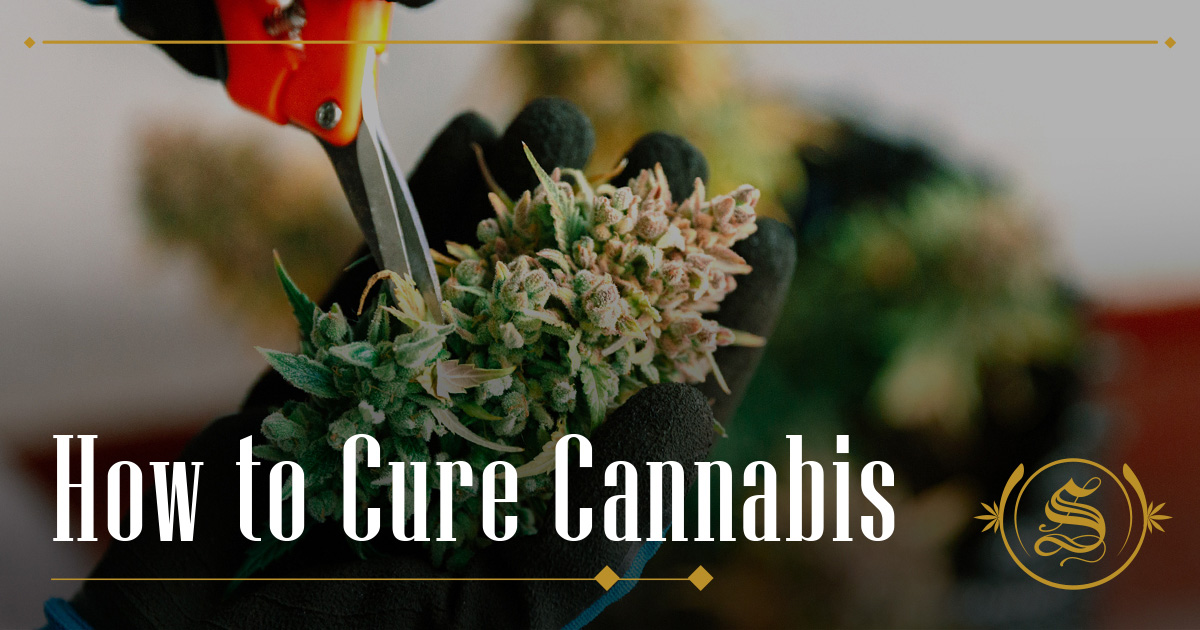 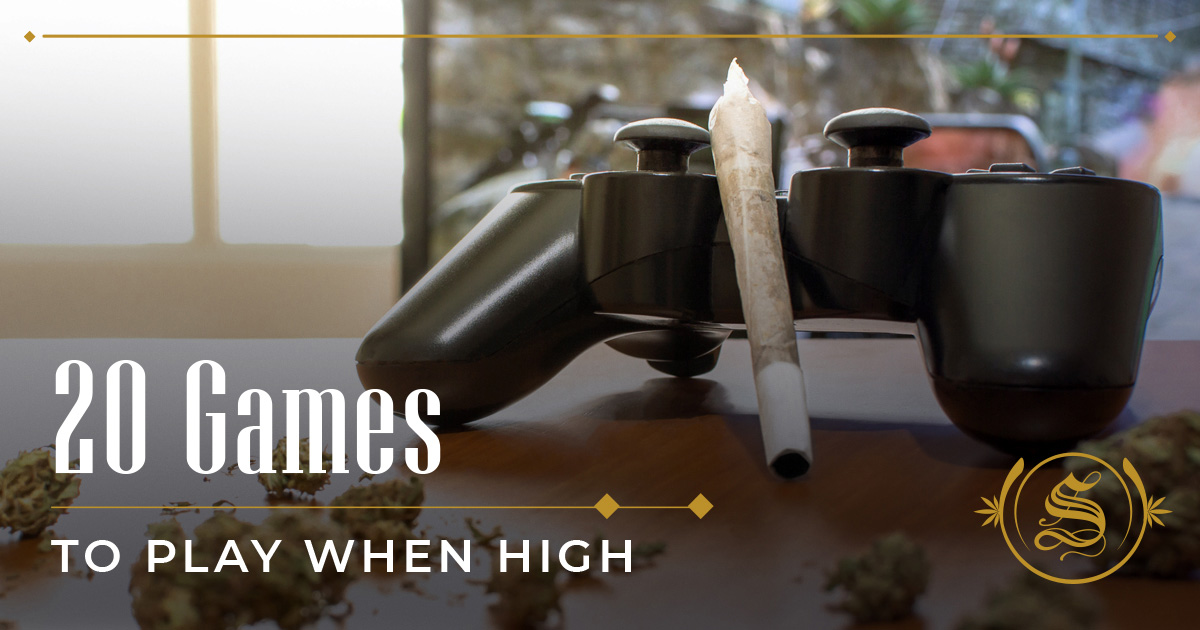