The question of whether or not secondhand smoke exposure can cause people to fail a drug test is of concern to many. The rise in THC potency also contributes to the anxiety for this scenario.

Maybe you were hanging with your friends as they were hotboxing in a car and you have a drug test coming up. The worry for failing a test due to secondhand smoke is valid yet science suggests it is not likely to occur.

Secondhand exposure to weed smoke produces very different THC levels than if you were to consume weed firsthand. Extremely small levels of THC get released back into the air upon exhaling.

Therefore, it is very unlikely for someone to exhale enough secondhand smoke to fail a drug test.

With instances of extreme smoke exposure, positive test results are still unlikely but more possible. According to a study, in a setting with no ventilation, it is possible to consume enough secondhand smoke to test positive for THC “only under environmental circumstances where exposure is obvious.”

A different study placed both non-smokers and smokers in a vehicle together. The conclusion of the study demonstrated that if collected appropriately with a holding period before collection, the chances of a false positive test for THC were “virtually eliminated”.

The science behind secondhand smoke

Johns Hopkins University School of Medicine produced a study that paired several habitual cannabis users with non-users and placed them in air-tight room together for an hour. One subject smoked a joint of potent weed.

The 12 nonsmoking subjects were then instructed to urinate into a cup 13 times over the next 34 hours.

The results turned out to be good for nonsmokers. The study found that one nonsmoker had tested positive for THC but this was only within a period of 6-8 hours after being exposed to the smoke.

The researchers concluded that positive tests for secondhand smoke were rare, “limited to the hours immediately post-exposure, and occurring only under environmental circumstances where exposure is obvious.”

When people refer to a phenomenon called a “contact high” they are either joking or they have convinced themselves to be high sheerly by being near copious amounts of stinky bud. The placebo effect is another way of considering it.

There is truly no such way to get high just by being in contact with weed or someone who is very high or smelling strongly of weed.

Is THC active after cannabis smoke is exhaled? 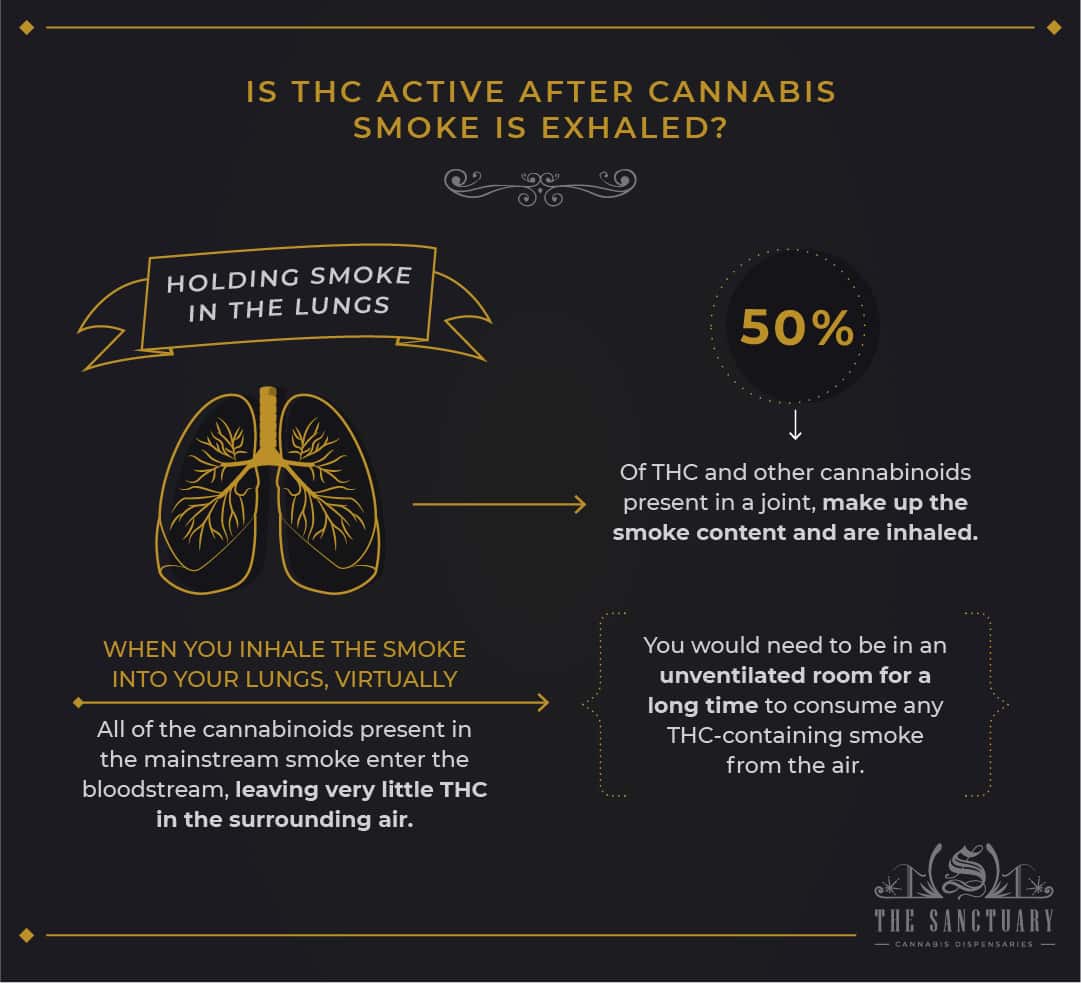 According to the British Journal of Anesthesia, lungs will absorb most of the THC when weed is smoked. The contents of the smoke that gets inhaled are made up of roughly 50 percent of THC and the remaining cannabinoids.

“Experienced smokers, who inhale deeply and hold the smoke in the lungs … virtually all of the cannabinoids present in the mainstream smoke enter the bloodstream,” which means very little of the smoke that gets exhaled by experienced users contains THC.

As a result, the lingering smoke in the air should only have a minimal amount of active THC in it. This research backs up the previous claims of the secondhand high being a myth.

Can you get secondhand exposure from vaping?

All of this information may explain how secondhand smoke works but what about the case of secondhand vapor? Well, truth be told there is not enough research to suggest any claims.

Vaping is a relatively new phenomenon and science just simply have not had time to catch up to it. Research, however, has been able to demonstrate the health benefits of vaping over smoking. Vaping weed minimizes the consumption of smoke-based carcinogens and toxins such as tar, carbon monoxide, hydrogen cyanide, and ammonia.

Secondhand smoke is ineffective at getting nonsmokers high as well as pumped full of active THC and therefore it is safe to assume the same applies for secondhand weed vapor.