How To Make Hash: What Is Hash?

As of the last few years, weed concentrates have seemingly taken over the cannabis market. Some canna-connoisseurs even suggest that concentrates are the future and that flower is old news.

Surely flower is not going away anytime soon but there are some interesting debates over which cannabis product is the best. This surge in popularity has people wondering if they can make concentrates at home.

These solvents can be very dangerous if they are not used correctly. You must allow for solvents to fully evaporate after extraction otherwise the final product may become contaminated. Luckily, for the DIY-ers out there regular hash needs no solvents.

Hash comes from the word hashish which means “grass” in Arabic. Hash is a cannabis concentrate made from fresh resin glands (trichomes), also known as kief, that have been separated from the plant matter of a cannabis flower. Trichomes produce a viscous resin loaded with secondary metabolites such as cannabinoids and terpenes.

Hash is created through mechanical means such as heat and pressure or by mixing it with water. Then it is formed into a brick, bar, block, or ball.

Historically, hash has been around for a long time. Indians have known how to make hash for centuries. In fact, they rubbed cannabis with their hands until the friction and heat coated their hands with the plant’s resin. Then, they rolled the resin into balls called “charas.”

How to make hash?

There are a few different ways of making hash and luckily none of them are difficult. The supplies are easy to find and the necessary skill level is low.

The easiest way to make hash is by dry sifting it. The process of dry sifting involves friction to separate trichomes from the rest of the bud.

The result is a dusty-like substance that is known as kief.

The kief is then usually pressed into little pucks or balls to create a nice homemade hash. Dry hash has a nice flavor with substantial potency. The supplies you need for this are few and easy to find:

How to make dry sift? 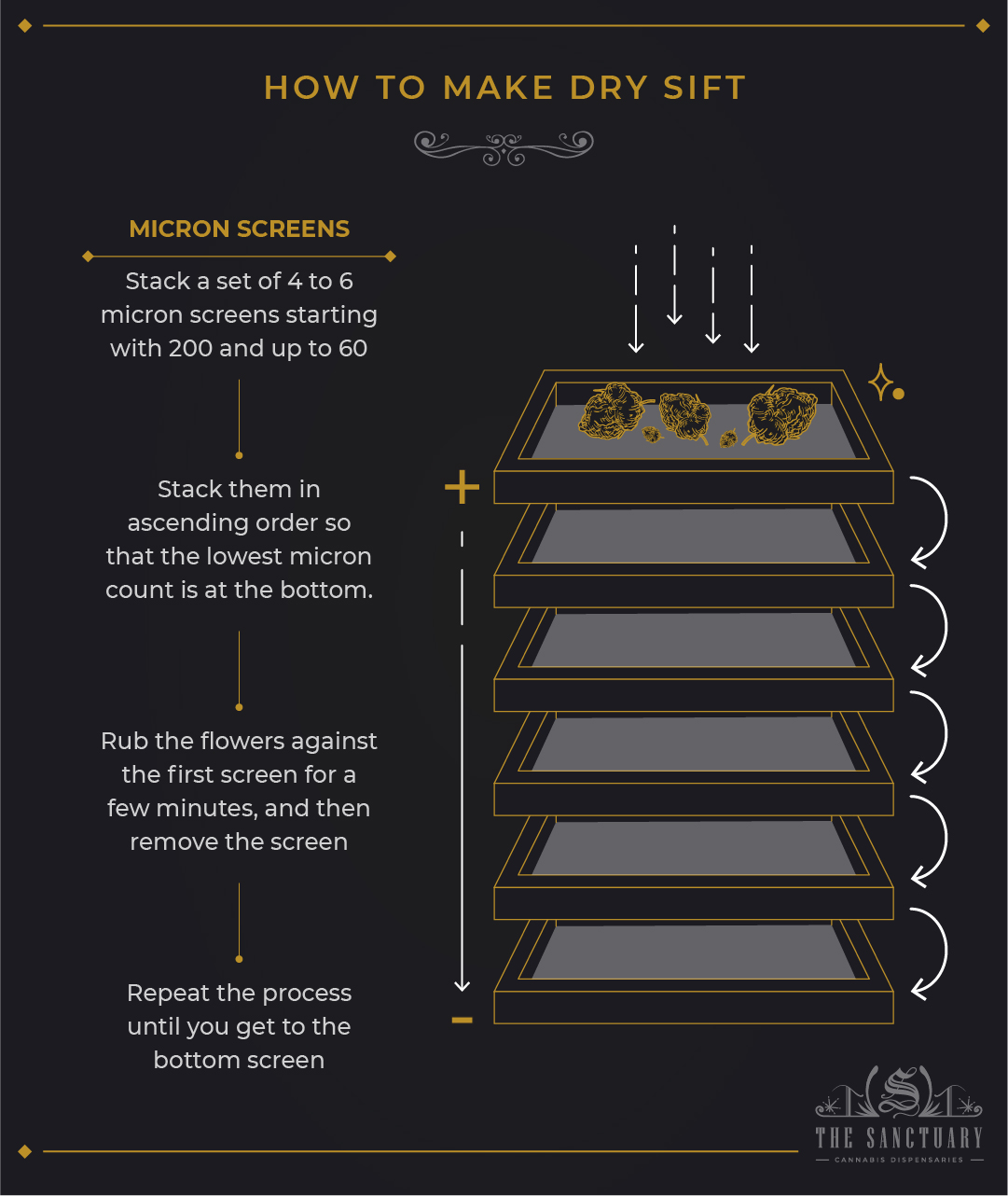 First, get out your set of micron screens. A set of screens usually contains 4–6 screens. Common micron screens for making hash are 73, 90, and 140 microns, and the higher the number, the finer the mesh. Fine micron bags are designed to only let the heads of trichomes through.

Stack your screens on top of each other with the highest micron count on top and the lowest micron count is on the bottom. Put on your gloves before handling any weed product because things will get sticky. With your gloved hands, break up any larger buds into smaller pieces to expedite this entire process. Next, place your plant material on the top screen.

Shake the screens vigorously from side to side and backward and forward. Use fluid movements to avoid messes. Avoid applying too much force onto the screens otherwise, you may push unwanted material through the micron screens. You only want the trichomes to be passing through.

After several minutes, lift the top screen off the stack. There should be a layer of kief collected on the screen underneath. This product is useable in itself but you should continue the sifting process for a more pure result.

Move the kief back and forth with your old plastic card a few times to scrape off any remaining kief. When you lift this screen, there should be another layer of kief collected below. This will be finer than the last layer.

Continue this process for every screen in the stack. When you get to the bottom screen, you will have a product that is extremely potent and pure.

With a credit card or playing card, scrape the kief powder together into a nice pile and move it into a clean glass jar. You should also scrape the other screens for any remaining residue, however, you may want to keep that kief separated because it will not be as high-quality as the final sift.

This kief you now have can be used in many different ways like adding it to bowls, joints, and blunts. You can also place the kief carefully onto a piece of parchment paper and firmly apply heat from a tool such as a hair straightener. This will press your powdery kief into a disc of hash which is easier to store and use.

Bubble hash may also be referred to as water hash or ice hash. When plant material is mixed with water and ice, they become brittle and break off when the mixture is agitated. The trichomes then sink and are collected with specially designed micron bags. You will need the following supplies to make bubble hash:

How to make bubble hash?

You can make bubble hash with either fresh or dry plant material. If it is fresh try putting it in the freezer for up to an hour in order to help stiffen the buds and loosen the trichomes.

Fill the top bag with cold water and ice then add your plant material. You want this to stay cold for the duration so it is best to use as much ice as you can fit. Pour in some water just until you submerge the plant material and ice.

Next, stir all of this together. You can use a wooden spoon or even a stick. If this starts to become too laborsome you can use a hand mixer instead.

After about 10–15 minutes of stirring, remove the top bag out of the water and squeeze out any remaining liquid. Place this bag aside in your second bucket.

Lift out the rest of your bags one at a time and hang them up to dry. Once dried, scrape the contents of each screen and place them into clean glass jars to store. Separate the product from the bottom bag just like with the dry sift technique because this is the purest stuff.

Once again, you can press this product into little bricks for ease of use.

If you are looking to make hash the traditional way then try a technique called Charas. This ancient technique is popular in Northern India, Nepal, and Pakistan, and is very simple to do; all you need is fresh cannabis and your hands. Charas is also called finger hash because of the use of your hands.

This technique is simple but it sure is sticky. Cannabis enthusiasts like to try this method for the sake of tradition and because it can be fun. To make charas, you will need:

How to make charas?

The first step is to clean your hands using a non-scented soap. You do not want to contaminate your hash with dirt or other impurities.

Select an average-sized bud that can fit snug inside the palm of your hand. Press your hands together and roll the nug gently and slowly back and forth. Rolling it slowly will produce a better final product.

Continue this for several minutes. Eventually, resin from the bud will start to develop on your hands. If the resin stops building on your hand then the bud is used up and it can be discarded. You could still smoke it but it will not be very potent.

Resume rubbing your hands together until a stick or ball of resin begins to form. After shaping your charas, store them in a clean jar. When your hands are covered in resin, the most efficient way to clean them is to use oil such as lemon oil, but canola or vegetable will do.

Traditionally, charas is smoked in a clay pipe called a chillum.  Try adding a thin strand to a joint or blunt. On top of a bowl of flower is also fine but adding it to a half-smoked bowl is even better.

If hash is the result of resin, then getting a strain with a high level of trichomes is your best bet.

Generally, the frostiest bud you can find will be good for hash. Here are some famously trichome heavy strains:

How to smoke hash?

There are many ways to consume hash. Traditionally in India, hash would be infused into a beverage called bhang. In most other nations, hash is smoked. Any device you smoke flower out of you can also smoke hash from.

Hash can also be vaporized on a hot surface like a stone or glass nail. This method is referred to as “dabbing”.

To successfully dab hash you will also want a dabber tool for scooping the hash, and a significant source of flame like a butane torch; normal lighters will not get hot enough.

Keep in mind that hash is going to be much more potent than regular flower. The potency of hash can measure between 40-80 percent THC, depending on the weed it was made from and how it was made. 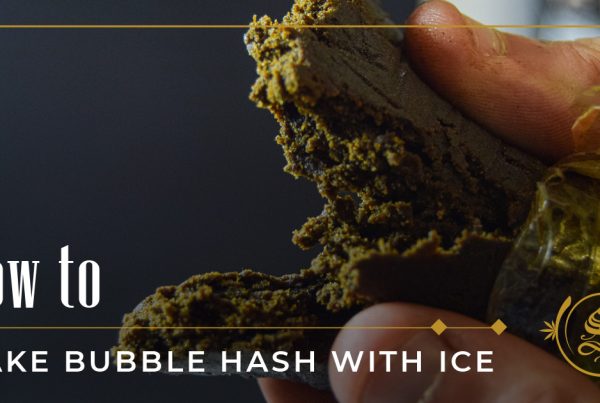 How to Make Bubble Hash with Ice 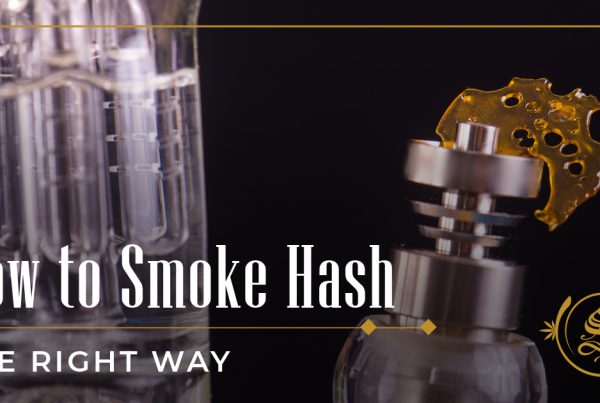 How to Smoke Hash The Right Way 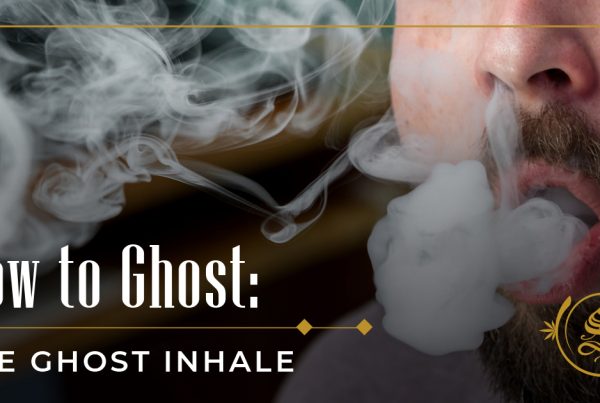