How to Tell if Your Weed is Laced

Some consumers have fallen victim to weed laced with substances that are a little less than okay, and they didn’t even know it. But how would they know? What are the signs to look out for if you’re concerned your weed might not be safe? Luckily for you, we will show you how to tell if your weed is laced.

What Does Lacing Mean?

To put it simply, lacing means putting a foreign, and often illegal, substance in your weed to possibly make it stronger (though more malicious intentions have been behind it), but this often results in disaster. A laced joint, for example, could contain small amounts of heroin, cocaine, LSD, soap, Fentanyl or even glass.

Now, from that definition, some of you may be thinking, “Wait, that sounds like infusing, is there no difference?” Admittedly, it does sound similar to infusing a pre roll, but the key differences are in the substance and the method of infusion.

Your run-of-the-mill laced weed is typically half-assed because it is not always done by professionals, and contains substances that are not meant to be smoked. Infusion on the other hand is often done professionally before it hits the dispensary shelves and is simply packed with hash to boost the THC.

How to Tell if Weed is Laced 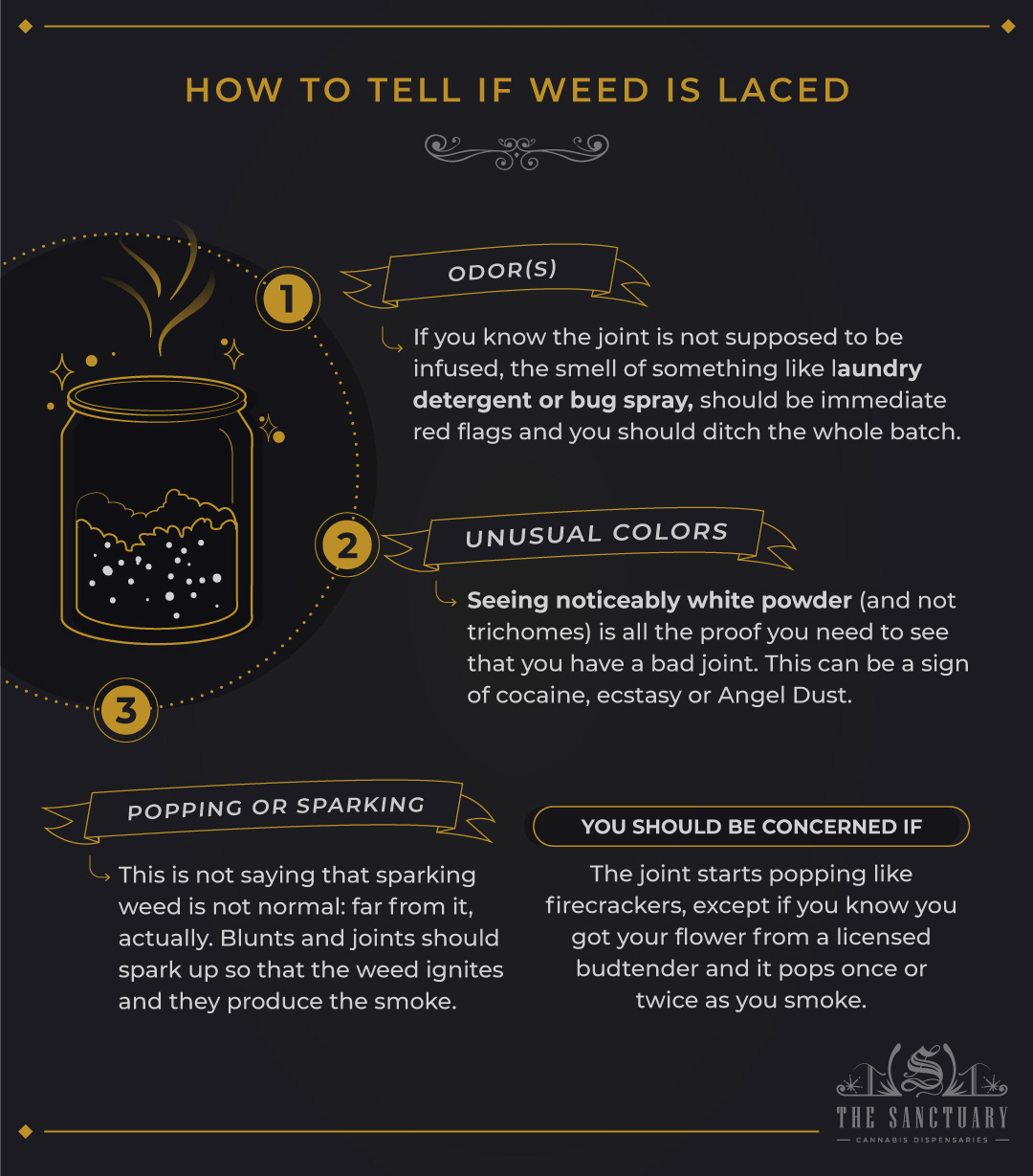 Unlike a laced drink where you would not taste or see it until it’s too late (most of the time), there are a number of ways to spot laced weed before you take it. Spotting your laced weed is especially noticeable if you are…‘experienced’ in smoking weed. You know what it feels like to smoke a regular or infused joint, so you are more likely to know that something is wrong if your weed is laced by the feel of it, the smell or just by looking at it.

It would be very difficult to smell if something is in your drink that should not be there (depending on what it is), but your nose is like a guard dog in sensing laced weed.

You know the infamous weed smell by now, and if you know the joint is not supposed to be infused, the smell of something like laundry detergent or bug spray (yes, people actually lace weed with this stuff) should be immediate red flags and you should ditch the whole batch.

Cocaine is also one of the smells you could (probably) pick up from a laced joint, since it smells vaguely like a chemical solvent when mixed with weed. But beyond that, seeing the noticeably white powder (and not trichomes) is all the proof you need to see that you have a bad joint.

Some ecstasy comes in the form of white tablets, so if that was crushed and rolled into your joint, you would notice the white dust as well. The same goes for Angel Dust (which you might remember from the movie Friday). You know that trichomes are not really a stark white, so something is wrong if you see a bunch of that outside the buds.

To clarify, this is not saying that sparking weed is not normal: far from it, actually. Blunts and joints should spark up so that the weed ignites and they produce the smoke or vapor you breathe in, but you should be concerned if your joint starts popping like firecrackers.

The one (and probably, only) exception is if you know you got your flower from a licensed budtender and it pops once or twice as you smoke. This is almost always an issue of a harmless seed or stem getting packed in the joint, which would cause the extra spark.

How does it Feel?

So many of the laces are such bad chemicals that you immediately notice their effects. Some of them mess with your heart in such a way that it could lead to a stroke or cardiac arrest. Remember: This is not the stuff that you are used to smoking, these are (often) illegal chemical additives that have a much greater risk of killing you if they are ingested at all.

Other symptoms ranging from mild to severe include vomiting, diarrhea, extreme mood swings or respiratory problems. Anxiety and paranoia have also been reported by way of laced weed, but some first time consumers might get those same feelings if their first hits are too strong.

Unfortunately, there could arise a situation where you would have to check your weed for glass (like, actual glass). In certain lighting, some trichomes almost look like they shimmer but this is pretty much a lighting trick. If you notice that your dub is a little too shiny, rub on the back of a CD, movie or game disc and very lightly rub your joint on it.

Your weed is laced with glass if the disc is scratched, but safe if it isn’t.

As you may know, your typical side effects from the occasional smoke range from red eyes and dry mouth to anxiety and loss of coordination, all of which are temporary. Chronic use (seriously, no pun intended) eventually makes these side effects longer or more severe, but even those do not compare to what would happen to you with a laced joint.

There is no better way to guarantee the safety of your cannabis than buying it straight from a dispensary. Nothing will be laced, nothing will be tampered with illegal substances and nothing will give you unexpected side effects.