Sexing Weed Plants: How to Tell Males From Females

Cannabis plants, like most other plants, animals, and other living forms, have separate genders. Male or female reproductive parts can be found in them. Hermaphrodite plants are also possible but rare. These are plants that have both male and female characteristics.

If you are growing weed and want to get the most buds out of it, you will need to know how to distinguish between female and male cannabis plants. Female cannabis plants are preferred by almost all producers since only females yield THC-rich buds for medical or recreational uses. Male plants have a lower potency than female weed plants, thus they are usually preserved to generate seeds.

If a male plant gets into your cannabis garden, it can fertilize and contaminate healthy females. When a female plant gets pollinated, instead of spending its energy on building a bountiful set of buds, it begins to produce seeds. When you have invested so much money, time, and effort into the cultivation process, this is the last thing you want to happen.

Regular cannabis seeds have a 50/50 chance of becoming male or female plants, just as nature intended. Regular seeds are preferred among breeders generating new strains since they yield males. Pollen is produced by males, which is used by breeders to fertilize female flowers, resulting in the next generation of seeds.

Regular seeds come in a variety of sizes and shapes. Sativa-dominant, indica-dominant, high-THC, and high-CBD strains are all available. Genetics is a fully natural process. They are the outcome of cannabis’ natural evolution. There is not any tinkering or tweaking going on.

Feminized genetics is created by simply crossing two females. To encourage female plants to generate pollen, breeders utilize two methods. They subsequently fertilize another female, resulting in a generation of feminized seeds from her flowers.

Feminized seeds were developed to increase the likelihood of female seedlings germinating. To be more specific, the chances of a female plant arising from feminized seeds are roughly 99.9 percent. If you prefer buds over pollen sacs, the chances are in your favor.

How can I determine the sex of my weed plants? 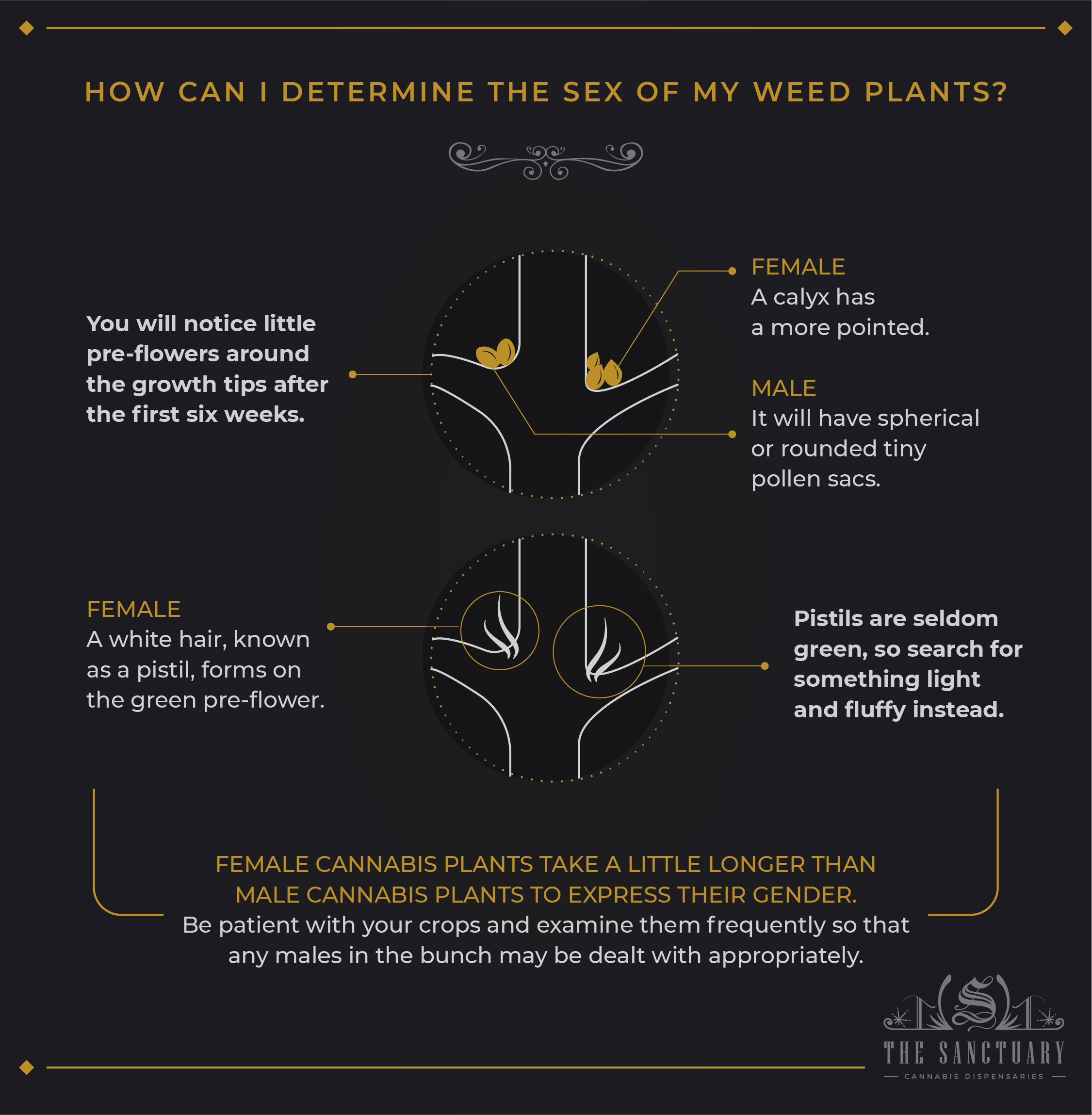 You will notice little pre-flowers around the growth tips after the first six weeks. They will either have a little pointed end or a more rounded end. It is more difficult to see a difference immediately with some strains. A calyx has a more pointed end and will be seen on a female plant. A male will have the aforementioned spherical or rounded tiny pollen sacs.

Wait a few more days if you cannot detect the change yet. If a white hair, known as a pistil, forms on the green pre-flower, it is female. Pistils are seldom green, so search for something light and fluffy instead.

The “small green balls” on the male plant will continue to expand in size, filling up with more pollen until they rupture and spill pollen all over the place. Before this happens, you must capture the male, since pollen will fertilize the females. Their buds will stop developing at this moment.

Female plants are frequently easily identified. While both males and females produce flower, female plants’ buds normally bloom after the males have finished. Female flowers will resemble sacs with two stigmas (feather-like stigmas) growing out of them.

They expand up to develop little yellow, cream, or white blooms in the end. Male pollen is trapped in their hairy, pale pistils. The stigmas are located in a node area of the main stalk. This is the point at which a branch emerges from the main stem or emerges from another branch.

Males are easily identified by their quick maturation. Male plants develop faster than female plants, which means they will grow faster and taller roughly two weeks before a female plant. This allows them to pollinate female plants. They have a straighter growth pattern and produce fewer buds than females.

The buds are usually seen at the plant’s top. Male flowers, unlike female flowers, are tightly clustered green clusters. They can start flowering up to a month before females, allowing growers plenty of time to spot them.

When autoflower plants are about to flower, their preflowers appear, but there is no way to know if it is a male or female plant at this time. These pre-flowers are commonly found on the third or fourth pair of leaves. Preflowers are most commonly seen towards the bottom of plant branches when tiny branches emerge from the main stem of the plant.

In a few days, these “balls” or “balls on a stick” preflowers will transform into a ball-shaped object that resembles a “crab’s claw.” The male pollen is held in these unique cannabis male flowers. These “claw-like” ball-shaped things can burst open in a matter of hours to days, with no way of knowing when.

When those balls open, pollen is released into the air, where it is subsequently carried by the wind to female plants. Male pollen from autoflowering cannabis plants appears as a golden-white powder.

Once plants have developed and begun to reveal their reproductive organs, it is relatively straightforward to determine their gender. But, to be honest, waiting till this stage is risky. When females and males are in the same room or garden, the males have the potential to pollinate an entire crop at any time, and merely moving them can cause pollen sacs to split and fertilize any females nearby.

Instead, before the plants begin flowering, growers should check for signals of sex. Male plants growing outside will have distinct growth signals than female plants, which may be used to distinguish the two. The vegetative stage is the initial stage of plant maturation. They are getting bigger and rounder at this point, and their sole attention is on growth.

Growers may keep a watch out for growth patterns that could indicate sex, even if their reproductive organs are not yet present. Females are known to have more intricate branching systems throughout this phase, making them appear fuller and broader as the branches mature. Male plants, on the other hand, are more spindly and tend to grow taller rather than broader.

Male plants are often less densely packed, having fewer branches and leaves. These signals are more visible when plants are growing outside. These signals do not indicate that the plant should be removed from the crop, but they can help growers identify the sex of a plant before it is too late.

This is the only guaranteed technique to tell if the plants are male or female before they reach maturity. The nicest thing about this approach is how simple it is. You just cut a piece of one of your plants.

The steps to making a clone include:

To avoid getting things muddled up, keep note of which clone originated from which host.
Once you know it is female, you may force flowering on a host plant (not a clone) and then put it back into the vegetative stage. This procedure, however, does have a potential downside. While it might help speed up the reveal process, it can also cause undue stress to a growing plant.

What should I do with male plants?

Get rid of the male cannabis plant once you have identified it. It is advisable to eliminate the males as soon as possible unless you want pollination and seeds. It is not enough to just separate the plants.

Even if you move the male plant to a different section of your yard, pollen might still be carried by the wind. Female cannabis plants have been reported to be pollinated by neighbors grown many blocks away.

Despite this, male cannabis plants are not completely worthless. You want females if you are producing a crop to distribute or for personal use. However, if you are cultivating hemp for clothes, the male plants produce a softer fabric that is ideal for manufacturing apparel.

Another alternative is to slice up the male plant and use it as a mulch. The leaves, which are high in nutrients, can also be juiced.

What are hermaphrodite weed plants?

On rare occasions, a plant will show both sexes. Plants that look to be female might actually be hermaphrodites that have not shown their true nature yet. The term “hermaphrodite” refers to a plant that has both male and female reproductive organs. As a result, plants with female characteristics in the vegetative stage may turn hermaphroditic and generate male pollen once they reach the blooming stage.

This commonly happens when a female plant blooms late and is not pollinated. Cannabis plants make a last-ditch effort to produce seeds and they occasionally produce a tiny number of male blooms in an attempt to fertilize themselves.

To avoid pollinating an entire crop, some producers pinch off the few visible “bananas” (staminate), while others uproot and/or kill the plant. It is most likely that a plant will become a hermaphrodite within the first three weeks after flowering; however, certain strains might take up to five weeks. Male parts will appear on the plant either on their own or from within female parts.

As a result, if you are not looking at every bud site on the plant, it might be difficult to spot these characteristics. If you notice male characteristics like the growth of small balls or what some people call bananas, you should remove the entire plant.