Should I Smoke Weed if I Have a Cold?

Colds and flu afflict everyone at some point in their lives. While these frequent ailments usually are little more than a minor annoyance, they can sometimes knock you off your feet.

Colds and flu are caused by viruses rather than bacteria, which is one of the primary issues. As a result, antibiotics will not help, and the only thing you can do is relax and let your immune system take care of the rest. Most healthy individuals will recover from colds and the flu in approximately five to seven days. But, in the meanwhile, what can you do?

While you wait, you may take action to ease your symptoms and make your life more pleasant. When it comes to a cold or flu, many people grab for the pharmaceutical cupboard first, while some prefer to go the natural route. Some people may be considering using cannabis to alleviate the symptoms of a cold or flu. Is it, however, a smart idea to smoke cannabis when you’re sick?

What causes the common cold?

The common cold can be caused by more than 200 different viruses. After inhaling virus particles, people get symptoms of the common cold. These bacteria generally enter your lungs after being in close proximity to someone who is coughing, sneezing, or just breathing. If you touch a contaminated surface and then wipe your mouth or pick your nose without washing your hands, you are also at risk.

The common cold can occur at any time of year, although infection rates spike in the fall and winter. The dryness of the nasal passages during these months is exacerbated by the absence of humidity, which contributes to infection. A person’s chances of getting a cold are also increased by a number of risk factors. Here are some of the factors:

How do common colds affect the body?

Upper respiratory infections are caused by cold viruses. Your immune system responds quickly when virus particles reach the airways. Foreign infections and the body’s own cells will be distinguished initially by white blood cells. These white blood cells start to work as soon as they detect the adversary.

The adaptive immune system begins shortly after that. Antibodies are produced by white blood cells that are particularly tailored to attack the new infection. These proteins indicate that the body will be able to protect itself against the same disease in the future.

You might have a variety of bodily symptoms, such as:

The majority of people heal before anything else occurs. It does not, however, go away as quickly for everyone. The following are signs and symptoms of a severe cold:

How does smoking cannabis affect me when I am sick? 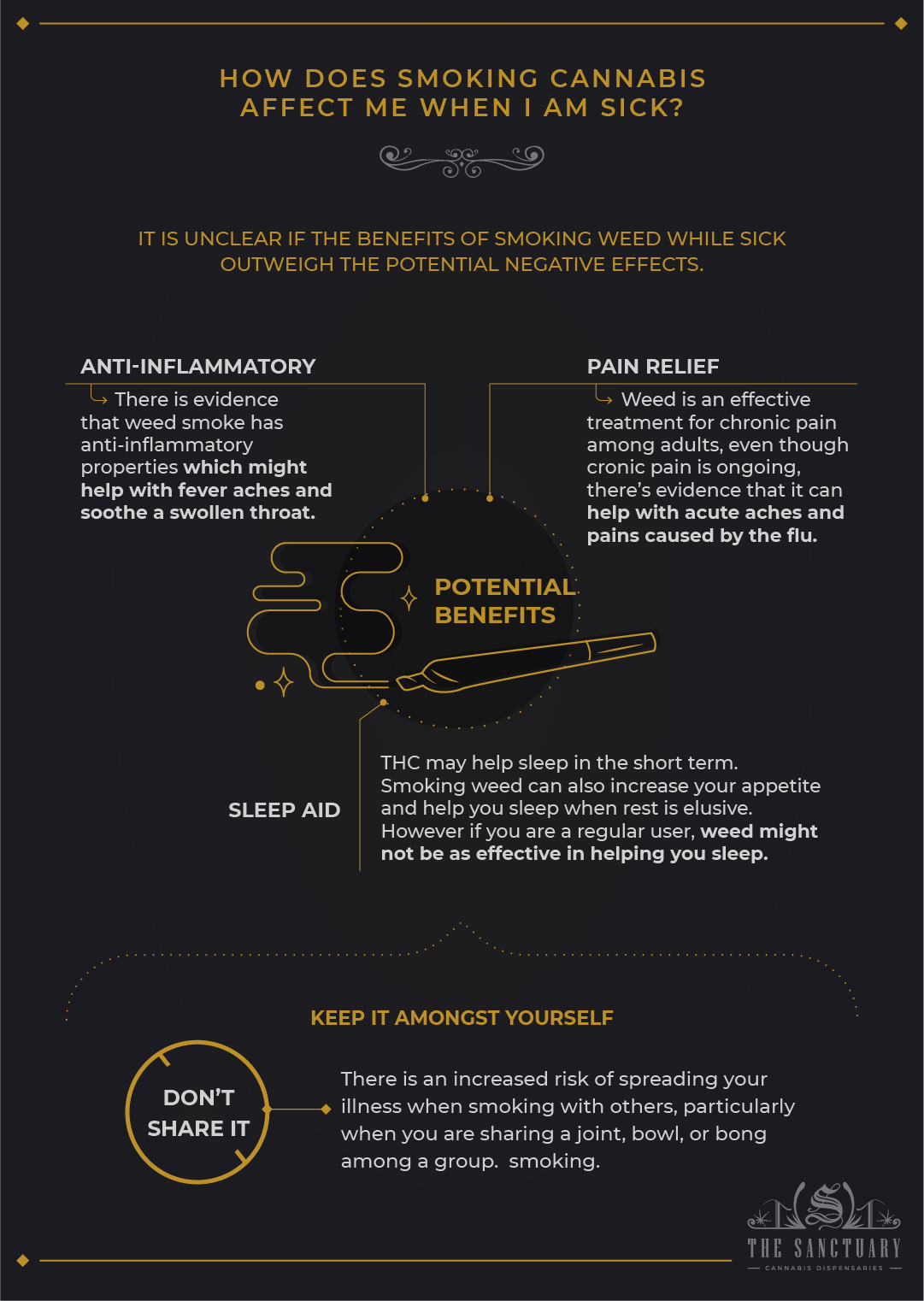 Smoking cannabis or not if you have a cold or the flu is a personal choice. Cannabis has no effect on the typical cold or flu, according to experts. However, further research is needed to back up any such claims. If you’re already feeling poorly, smoking cannabis can make things worse, but it can also help with muscular pains and inflammation caused by the illness or a fever.

Analgesic and anti-inflammatory properties of cannabis smoking have been demonstrated, which can assist with fever pains and relieve a sore throat. Smoking cannabis can also boost your appetite and help you sleep if you’re having trouble sleeping.

When smoking while sick, one of the most important things to remember is to keep to yourself. When you smoke with others, you run the danger of transmitting your sickness, especially if you’re sharing a joint, bowl, or bong with a group. When it comes down to it, you don’t need to consume cannabis to get the advantages. Instead of smoking, try tinctures or edibles if you have respiratory difficulties.

Although there may be some advantages of consuming cannabis while under the weather, it is unclear if these outweigh the risks. The following are some of the potential advantages:

Cannabis opponents may be more inclined to suggest that smoking pot will make a cold worse. There is no evidence that smoking weed prolongs the duration of a cold or impairs the body’s capacity to fight it. However, other studies show that consuming cannabis may worsen cold symptoms.

In a 2018 study, low-quality evidence was identified associating weed smoking to respiratory symptoms such as coughing, wheezing, and mucus production. If a person already has these symptoms as a result of a cold, smoking cannabis may make them worse.

While some believe that smoking relieves inflammatory symptoms, others argue that the heat and smoke exacerbates them.

Another disadvantage of consuming cannabis when sick is that it may exacerbate symptoms like dizziness. This is due to the fact that smoking weed can cause your blood pressure to drop quickly, leaving you feeling light-headed or dizzy. While this may not be a typical concern for seasoned smokers, beginner smokers who are currently fighting an illness may be more vulnerable.

Furthermore, some people may have nausea or stomach discomfort as a result of cannabis (particularly edibles). If you’re already sick, this is the last thing you want to happen.

Can you smoke weed and take cold medication together?

You might be asking if it’s okay to use cannabis and cold medications at the same time if you want to get the most relief from your cold symptoms.

While there are no known interactions between cannabis and over-the-counter cold medicines, taking the two together should be avoided. Both cannabis and certain cold medications can make you sleepy, so combining the two might make you feel even more sluggish.

As a result, it may be better to select one or the other, especially if you have important things to do during the day.

Best ways to use cannabis to treat a cold

Cannabis may be consumed in a variety of ways, which is very helpful. Even better, the majority of them don’t entail blowing hot smoke down your painful, cold-infected throat.