What Is Shake Weed?

You may have noticed a collection of weed crumbs in the bottom of your jar. These crumbs are what is called “shake” and while you may not want to purchase this from a dispensary it can be some fine leftovers from your stash.

Because shake weed is the remainder of your once beautiful nugs, they do not contain as many trichomes (resin glands) and therefore are not as potent.

What is weed shake used for?

Shake weed may be sold by dispensaries in a zero-waste effort to provide medicine for patients. Shake is usually sold at a discount if it is sold at all so it is a good option for a tight budget. Dispensaries deal with huge jars and bags of weed so they inevitably will be left with tons of shake.

Weed shake is most commonly used in pre-rolled joints. It is already ground to a small particle making it very convenient to roll up.

Edibles are also a great way to use shake because there is still enough potency to the flower to be effective. Tinctures or concentrates are good shake options for the same reasons. You will need a lot of shake to make concentrates as potent as a typical dispensary-bought concentrate.

How to use shake at home 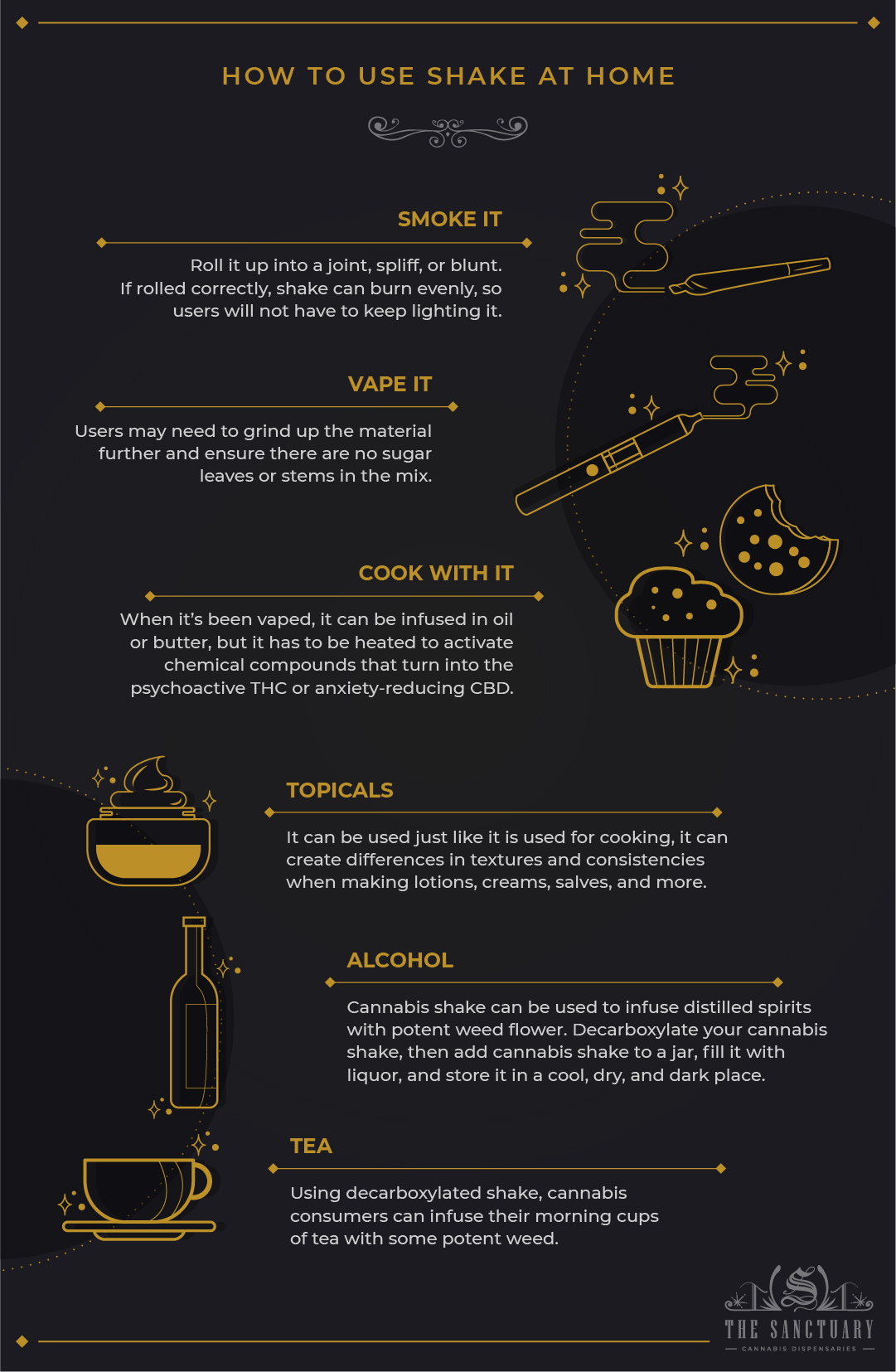 Because shake is not expensive, it is the perfect material to experiment with by making weed-infused beverages or foods. Here are some ways to use your shake weed:

Determining the quality of shake

As mentioned, shake is the result of leftovers from buds. This means that trichomes will most likely not be present on most shake. In addition to that, there also will not be any kief which is a byproduct of trichomes. Kief is the fine dust-like product that you may also see on the bottom of your jars and grinder and by itself is very potent. As a result, shake will not be potent.

However, shake should still look like weed crumbs. If someone is trying to sell you a bag of shake make sure it is not the trimmings of the plant being passed off for shake. The trimmings will include the sugar leaves which are not potent at all.

The cost of cannabis shake

Shake is cheap and if you are a user who does not need top-shelf bud then it is a great option to consider. Shake usually sells for about $100 an ounce, which is a great deal. Pre-rolls of shake should cost no more than $5 per. Every dispensary has different prices so these are not stead-fast but in general, shake will be the cheapest flower that you can buy.

When not to use shake

When making concentrates like hash, you will need copious amounts of shake and even then the quality of hash will not be high grade. If you want top-quality hash then stick to buds because the trichomes are the key to creating that grade of quality.

Much of the weed shake that is sold at dispensaries is a mixture of multiple sativa, indica, and hybrid strains. Make sure to ask a budtender for the source of the shake before purchasing.