If you have ever smoked weed before, or have ever been on the internet literally any time these numbers are even mentioned, you have had to suffer through a 4/20 joke or two (admittedly, some are good but they are obligatory). But why is that?

Why exactly is 4/20, of all numbers, the one associated with getting high?

If your guess or answer involves a major historical event, like a protest or a milestone in prohibition or maybe the number was a code used by smugglers who first brought weed to the U.S, good guesses! But they are wrong: The real answer involves some high school burnouts and a cool band. No joke.

The Date 4/20 throughout History

One of the most surprising things about the date April 20th (4/20), and somewhat of a deterrent for those who celebrate it with weed culture, is that it is Hitler’s birthday. Sorry to break the news, but you history buffs would eventually stumble upon it.

But it’s not all bad news, Luther Vandross, George Takei and Andy Serkis were also born on April 20th along with countless others who have done good for the world, so there is that. Historically, it would be very difficult to list every single event on every single April 20th, but it is nonetheless an interesting date.

April 20th throughout history marks the landing of the Apollo 16 lunar module in 1972, the end of the Bay of Pigs Invasion and the transition of power to the United Nations along with an unusual number of national tragedies. So, what does this have to do with weed culture? We may have to look to different parts of the world.

Interestingly enough, 4/20 has become a global holiday of cannabis culture as celebrations erupt across the world in places like Australia, Mexico, England and Canada; all of which rally to decriminalize the industry and call for action to pass new cannabis laws.

Elsewhere (like Asia, India, Russia, etc.), the calendar date holds very little significance, if any. The one major exception could be the UN’s observance of Chinese Language Day, which happens to fall on April 20th. The point being: Not too much is celebrated on 4/20 besides cannabis culture, which brings us back to the all-important question: 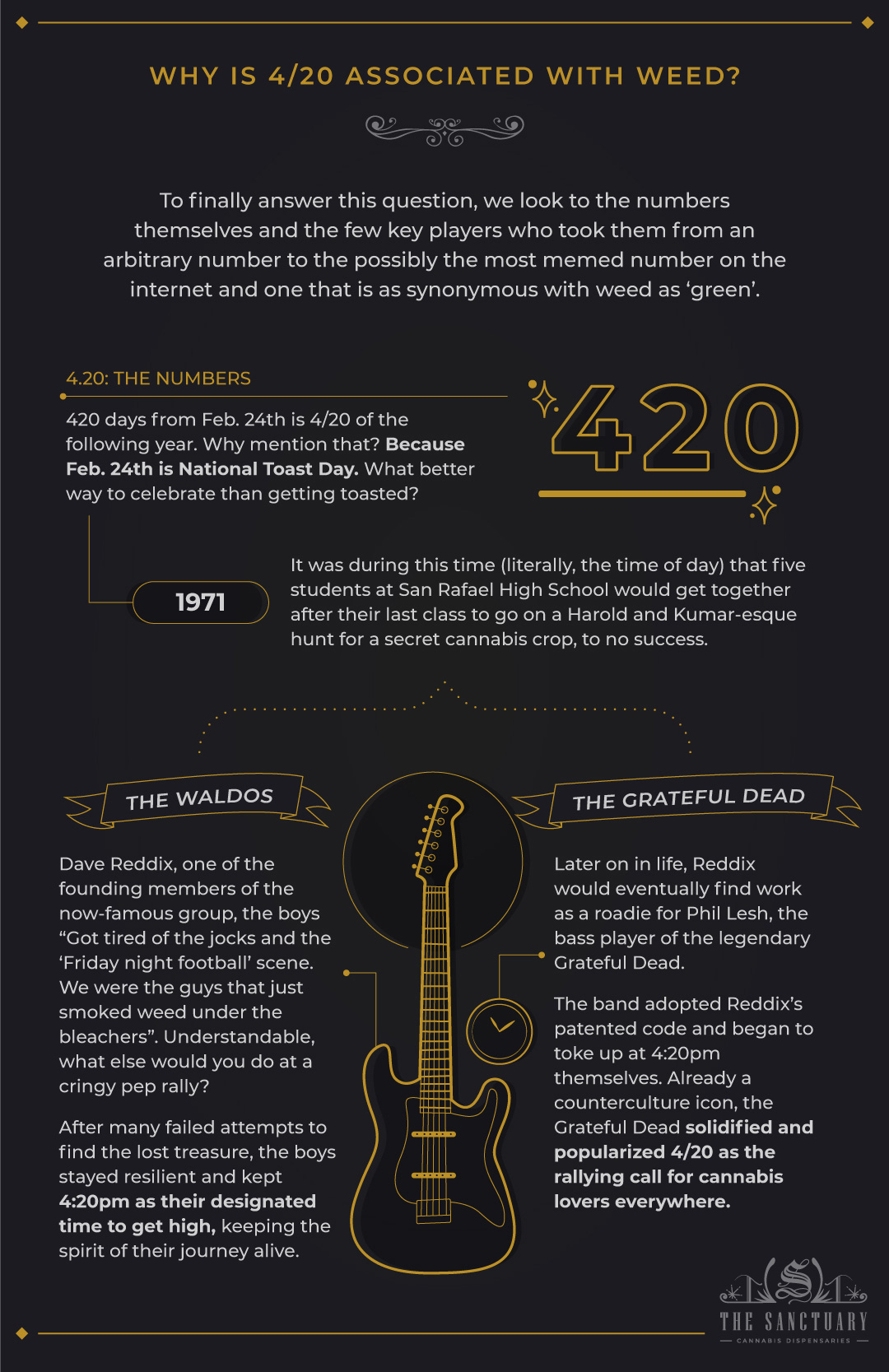 To finally answer this question, we look to the numbers themselves and the few key players who took them from an arbitrary number (⅕ if it were a fraction) to the possibly the most memed number on the internet and one that is as synonymous with weed as ‘green’.

Would you believe it if those key players, in a nutshell, were a fusion rock band, a couple of high school stoners? Neither did we.

Sadly, 4-20 is not the police code for someone illegally carrying or smoking the green stuff, but that would make sense today. But, fun fact: 420 days from Feb. 24th is 4/20 of the following year. Why mention that? Because Feb. 24th is National Toast Day. What better way to celebrate than getting toasted?

If the date April 20th did not (originally) have something to do with cannabis, why were these the two random numbers chosen to represent it? Well for that, we throw another at you and go back to 1971: The year that would forever change the meaning of April 20th.

It was during this time (literally, the time of day) that five students at San Rafael High School would get together after their last class to go on a Harold and Kumar-esque hunt for a secret cannabis crop, to no success. But who were these brave, young pioneers on the high schooler’s expedition of a lifetime?

Meet the Waldos: The officially, unofficially-named group of San Rafael Bulldogs who met after school everyday, at 4:20pm, and went on their expedition (and were likely toking up on the job).

According to Dave Reddix, one of the founding members of the now-famous group, the boys “Got tired of the jocks and the ‘Friday night football’ scene. We were the guys that just smoked weed under the bleachers”. Understandable, what else would you do at a cringy pep rally?

Reddix was joined by his friends and classmates Steve Capper, Mark Gravich, Jeff Noel and Larry Schwartz, who decided on the name ‘Waldos’ from the brilliant conclusion that they used to meet at a wall. After many failed attempts to find the lost treasure, the boys stayed resilient and kept 4:20pm as their designated time to get high, keeping the spirit of their journey alive.

Later on in life, Reddix would eventually find work as a roadie for Phil Lesh, the bass player of the legendary Grateful Dead. One of the most prolific and innovative bands of the 70’s, the Grateful Dead built a following that many bands only dream of without even being on the radio.

The band actually adopted Reddix’s patented code and began to toke up at 4:20pm themselves. Already a counterculture icon, the Grateful Dead solidified and popularized 4/20 as the rallying call for cannabis lovers everywhere.

Some may uphold the spirit of the Waldos and ‘toast’ at 4:20pm on April 20th, but the entire day is a cannabis celebration across the world, especially within the last decade.

More and more states began to legalize cannabis (a celebration in and of itself), but the milestone of 2016 came when Ohio became the 25th state in the nation to legalize for medical use: At that point, only a few short years passed after our first recreational legalization and we were already halfway there.

Today, 4/20 is filled to the brim with cannabis content, including podcasts, documentaries and stoner comedies while consumers across the world hold block parties, bake and share edibles and toke up with the best products on the market.

Is it More Relevant in Modern Culture?

why is 420 associated with weedIn short, that is kind of hard to say but it could be true. At the same time, you could ask yourself if cannabis culture or 4/20 were this common in the 60s or 70s (in certain communities) but we did not know because there was no social media. With the advent of the internet, everything and everyone feels more connected and so much information has become ubiquitous. Because of this, there is more knowledge of not only the holiday but the culture itself.

Obviously, the ending of prohibition for cannabis has been debated for decades alongside an explosion of cannabis consumption across the world as recreational use becomes almost as common as smoking a cigarette, therefore becoming less taboo in modern culture.