Can You Overdose on CBD?

By The Sanctuary Editorial TeamLast updated on January 10, 2021No Comments

Cannabidiol (CBD) has become a very popular product in the cannabis industry, showing up in local coffee shops, pharmacies, and legal marijuana dispensaries. Despite the incredible popularity of CBD, there is still a lot of confusion about what CBD is and how it affects humans.

After reports that some people in legal marijuana states have gone to the emergency room after having too many THC-rich edibles, some people worry that CBD might have a similar effect. It has led many people to ask:

“Can you overdose on CBD? What happens if you take too much? How much should I take?”

To be clear, CBD is considered safe in most circumstances. CBD is recognized as having a number of anti-inflammatory, anti-anxiety, and neuroprotective qualities, many of which can have positive effects on a broad range of health conditions. However, it is still important to understand not just the positive ways CBD can affect you but also any potential side effects that may accompany the cannabinoid.

Can CBD make you sick?

If you consume pure CBD, you are unlikely to get sick or experience unpleasant side effects. In 2017, a World Health Organization report concluded that CBD is “generally well-tolerated with a good safety profile,” and further stated that “in humans, CBD exhibits no effects indicative of any abuse or dependence potential.”

One such study, published in 2013, reported on a phenomenon called cannabinoid hyperemesis syndrome. The pro-emetic properties of CBD (at higher doses) were found to play a role in the severe nausea and vomiting observed in patients with Cannabinoid Hyperemesis Syndrome

Of course, this has to do with cannabinoid hyperemesis syndrome moreso than the effects of CBD alone. But nevertheless, adverse effects from CBD are possible depending on a patient’s existing medications.

The Harvard Health Blog published a post in 2018 regarding adverse effects caused by impurities or contaminants in the CBD, which could exist given the largely unregulated status of cannabis products. Following the passage of the 2018 Farm Bill, hemp-derived CBD products were legalized and placed under the jurisdiction of the United States Food and Drug Administration (FDA).

Studies have shown that CBD can help lower blood pressure. In a 2017 study conducted by the American Society for Clinical Investigation, researchers gave a group of subjects a dose of either 600 milligrams of CBD or a placebo. They then put subjects through a number of tests, analyzing blood pressure and other related body processes. Ultimately, they found that CBD reduced blood pressure levels compared with the placebo.

Low blood pressure will not cause problems for many people. However, for some it may. Even moderate forms of low blood pressure can cause dizziness, weakness, fainting and a risk of injury from falls.

Can CBD oil kill you?

A 2017 review of clinical research published in Cannabis and Cannabinoid Research confirmed that CBD is generally very safe, particularly when compared to other drugs. In general, the biggest risk you likely run if taking a huge dose of CBD may be getting sleepy as the cannabinoid can have tranquilizing effects in large doses.

However, the journal Case Reports in Ophthalmological Medicine reported a CBD-linked fatality in 2019. According to the report, a 56-year-old woman presented with Stevens-Johnson syndrome, a rare but serious disorder of the skin and mucous membranes. The patient had begun using a CBD extract spray one week prior to being admitted to a hospital emergency room, where she later died of septic shock.

The woman had reported consistent use of other CBD products over a 5-year period prior to this incident and it is unclear whether the new spray caused her to develop Stevens-Johnson syndrome, though the authors of the report suspect that it did. The patient, however, had a complex medical history including coronary artery disease and hypertension, so linking her death directly to CBD may not illustrate the full picture.

The bottom line is that CBD appears unlikely to be fatal, but exceptions may exist and collaboration with your physician is essential before starting a regimen.

Can you build a tolerance to CBD?

When people develop a tolerance for something, it means that their body gets used to that compound, which requires more to get the same effects, like needing an extra cup of coffee. This could compel a person to take more of it to obtain the same feeling. As the amount increases over time, this can lead to unwanted effects if they take too much.

On the contrary, with CBD, some people find that taking a daily dose can help sustain a level of CBD in your body, which might stimulate your endocannabinoid system to make it react more to cannabinoids like CBD. In fact, some people take CBD for weeks or even months before they see a difference.

How much is too much CBD? 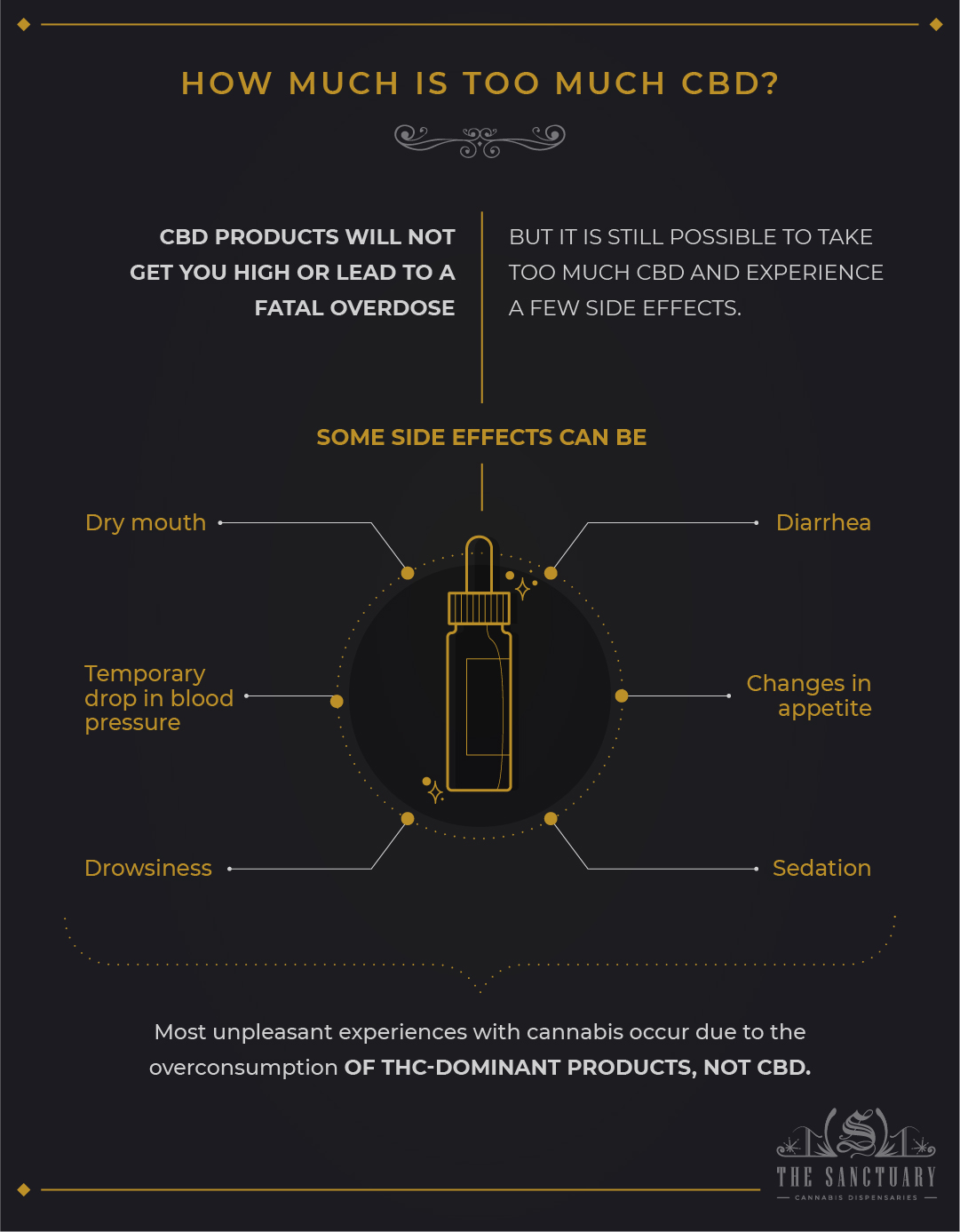 When someone asks, “can you overdose on CBD oil?”, they might not necessarily mean a fatal overdose. Sometimes, people use the term “overdose” to describe any negative reaction to high doses of specific substances.

While CBD products will not get you high or lead to a fatal overdose, it is still possible to take too much CBD and experience a few side effects.

CBD is well tolerated by most people. It is considered a safe supplement. Most unpleasant experiences with cannabis occur due to the overconsumption of THC-dominant products, not CBD.

Most of the time, too high doses of CBD will result in dry mouth and lethargy. Although the risk of overdosing on CBD is low, the potential adverse effects include:

So, how much is too much CBD depends on factors like your weight and unique body chemistry. As with any health supplement, people will respond differently to different doses. You can follow the recommended serving size indicated on the CBD bottle. Start low and slow, gradually increasing the amount until you feel the difference.

Can Pets Overdose on CBD Oil?

CBD overdose is also a common concern among pet owners. As reported by CNBC, the sale of CBD pet products reached a whopping $32 million in 2018. Brightfield Group, which is a cannabis research firm, estimated that the CBD pet market could hit 1.16 billion by 2022 in the United States alone.

CBD pet products are taking the industry by the storm. You can find CBD for pets in oils, tinctures, treats, and topical ointments; they are sold over the counter without a prescription. Like humans, pets can benefit from cannabinoids because they have an identical endocannabinoid system. People give their furry friends CBD to ease anxiety, seizures, and chronic pain, as well as for overall wellness.

“Can my pet overdose by taking too much CBD oil?”

Just like humans, pets cannot lethally overdose on CBD, but they can experience some side-effects after taking too much of this cannabinoid.

The Animal Poison Control Center has reported an increased number of calls regarding overdose symptoms of CBD ingestion, especially in dogs.

The adverse reactions to CBD in pets include:

Most CBD pet treats are labeled with a recommended serving size and dosing instructions. They also contain less CBD than products intended for human consumption. Most of the time, CBD pet treats are infused with 2.5 mg to 5 mg per piece.

It is paramount that you verify the source of your CBD products to make sure they come from reputable vendors that use organic ingredients and test their products in third-party laboratories for their CBD content and purity.

CBD as a treatment for drug addiction

Drug overdoses are a serious public health problem in the United States. Over 67,000 people died from it in 2018 alone, which makes for an 84% increase from the previous decade. All of these deaths resulted from prescription or illicit drug abuse or addiction.

“Can you use CBD to deal with addiction and its symptoms?”

Since addiction impairs someone’s ability to process information, going cold turkey can be nearly impossible without starting behavioral therapy and getting help from family, friends, and sometimes mental health intervention. The withdrawal symptoms that occur when someone is trying to kick the habit are the most difficult obstacles on a person’s way to sobriety.

There are studies that demonstrate CBD to reduce the rewarding aspects of multiple drugs of abuse, such as cocaine, amphetamine, and nicotine. Of course, CBD does not cure addiction, but it can support you in the recovery process.