Top 10 Countries Where Weed is Legal

Before weed was first made illegal, its hemp fibers were used to weave into clothes, spawning literal millennia of cultivation to produce clothing, ropes, textiles and herbal medicine. But as we all know, weed was made illegal when it was discovered to also be a psychoactive drug with unknown side effects (at the time).

Since then, weed has been heavily decriminalized and many places throughout the Western world now celebrate 4/20 and cannabis culture. The question now is, where is it legal to smoke?

Besides the U.S. with its historic laws, what other countries have legalized recreational use?

What was the first country to legalize weed? 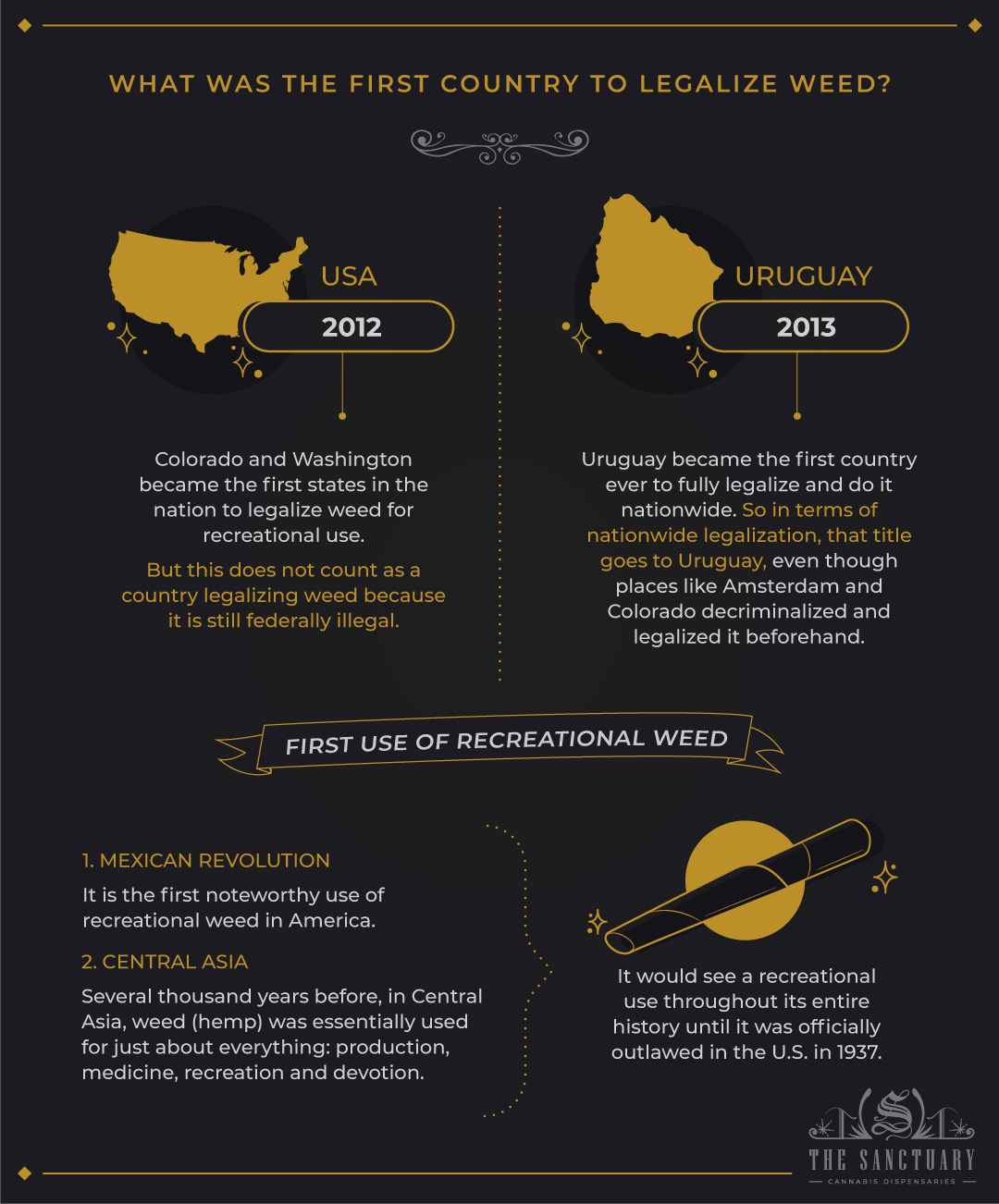 Now that many countries have legalized weed, that begs the question of who was the first. If your answer is the U.S., you are…technically not incorrect. Because back in 2012, Colorado and Washington became the first states in the nation to legalize weed for recreational use. Historic, but this does not count as a country legalizing weed because it is still federally illegal.

One year after those first two states had legalized weed, Uruguay became the first country ever to fully legalize and do it nationwide. So in terms of federal or nationwide legalization, that title goes to Uruguay, even though places like Amsterdam and Colorado decriminalized and legalized it (respectively) beforehand.

First use of Recreational Weed

Though the first noteworthy use of recreational weed in America dates back to the Mexican Revolution, the first recreational use of weed ever predates that by several thousand years. Originating in Central Asia, weed (hemp) was essentially a multipurpose plant as it was first used for just about every use it has: production, medicine, recreation and devotion).

It would see a recreational use throughout its entire history until it was officially outlawed in the U.S. in 1937. But even the Marijuana Tax Act would be futile against the growing popularity of weed culture from the 30’s through the early 2010s, leading up to our first legalization(s).

10 Countries Where weed is legal outside of the US

In the 10 years since Washington and Colorado’s weed laws were passed, the number of countries to legalize recreational use has grown almost every single year. In no particular order, these are only some of the countries that have since done the following: Legalized recreational use for their citizens, decriminalized its use, or both.

As one of the first countries people think of when they think of recreational weed, the literal weed paradise of Jamaica did become the first country to legalize smoking for religious use. Fitting, seeing as reggae and Rastafarianism have become synonymous with weed culture.

We are not kidding in calling Jamaica a weed paradise for its stunningly gorgeous scenery, incredible food and one-of-a-kind music and island culture only adding to the experience.

You still may not be able to sell weed in Costa Rica as of 2022, but recreational use within your own home has been made completely legal.

Fun Fact: Costa Rica’s history with weed is literally the opposite of America’s: The Marijuana Tax Act illegalized it in 1937 before California’s medical use was made legal almost 60 years later. Weed in Costa Rica was prohibited in the 30s and not really illegal, but it became illegal in 1961 and stayed that way until ‘personal use in small uses’ was decriminalized in 2016.

Similar to the United States, recreational use is federally illegal in Australia, but their Capital Territory has legalized it under ‘growth and possession of small amounts for personal use’.

Since the passing of this bill in 2019, the residents of Australia’s Capital Territory over the age of 18 can possess up to 50 grams of weed and grow up to 4 plants in their house at one time and their support to export weed as a medicinal product has, no pun intended, grown exponentially.

While you may not be able to consume in any public places, recreational weed in South Africa was decriminalized and legalized in September of 2018. Like most countries, their public possession is legal if you are not consuming and there are limits on how much you can carry.

South Africa allows 1,200 grams per household, and up to 60 grams are allowed in public. That is over 42 times the legal limit in California!

Do not be mistaken by Uruguay’s position on this list: In 2013, the smallest country in South America made international headlines as the world’s first country to fully legalize weed. Medical use, recreational use, cultivation and even sales became decriminalized and legalized in Uruguay for anyone over the age of 18.

While their government is still involved in their weed legislation and requires consumers to be registered as such, Uruguay remains a model for recreational laws across the world.

Guidelines for how much you can grow are still being determined, but Mexico legalized medicinal weed back in 2017. CBD is also perfectly legal throughout the whole country, and a special permit allows residents to smoke recreationally in private.

The weed laws in the Netherlands get a bit more complicated, but they are essentially as such: Recreational use is fine in coffee shops (thank you, Amsterdam!) and fewer than 5 cannabis plants for personal use is largely decriminalized.

Aside from the usual policy preventing residents and tourists from smoking in public, Spain has some of the most lenient weed laws on this list. How so? Full-on consumption clubs have been legal there since 2017 and you can possess up to 100 grams at a time.

This beautiful little island nation just south of Italy not only has some of the most insane ocean views you will ever see, but you can consume freely and store up to 50 grams of the green stuff in the privacy of your home and be out and about with up to 7 grams in public.

Even though weed is the 4th most used substance in all of New Zealand (nearly as much as caffeine), the sale of weed is prohibited as well as possessing 28 grams or more.

How Do Weed Laws Differ from the US?

Considering most of the countries listed here do not have ‘state’ lines and therefore do not have different areas where the legality changes, America is actually pretty unique in its weed laws, even to those that have legalized it recreationally.

Spain is a perfect example of what we mean by this: Even though provinces have less autonomy than states to make their own laws, Spain nonetheless has a total of 50 provinces (like U.S. states) that all follow the same cannabis laws.

Where are the most lenient weed laws?

As you might have guessed (or read), the country with the most lenient weed laws in general is Uruguay. Over nearly a decade, the country’s laws for recreational use remain unprecedented as not only personal use is legal but also sales and the possession of up to 99 plants at a time.

These dream laws for stoners may only be for their citizens (for the time being), but Uruguay nonetheless remains undefeated as (legally) the smoker’s paradise.