America’s history with recreational weed is somehow long and short, but is nonetheless interesting: Long in the sense that it was first documented in the States over 100 years ago, but short in that it has only been legal for about 10 years.

Despite this nearly century-long gap, several states have legalized weed for recreational use, averaging 1-2 states legalizing per year. Colorado and Washington broke the mold and made history in 2012, but what other states have legalized since then? Which of the 50 states would allow you to smoke a blunt even if you don’t live there?

Luckily, we have them all listed below. 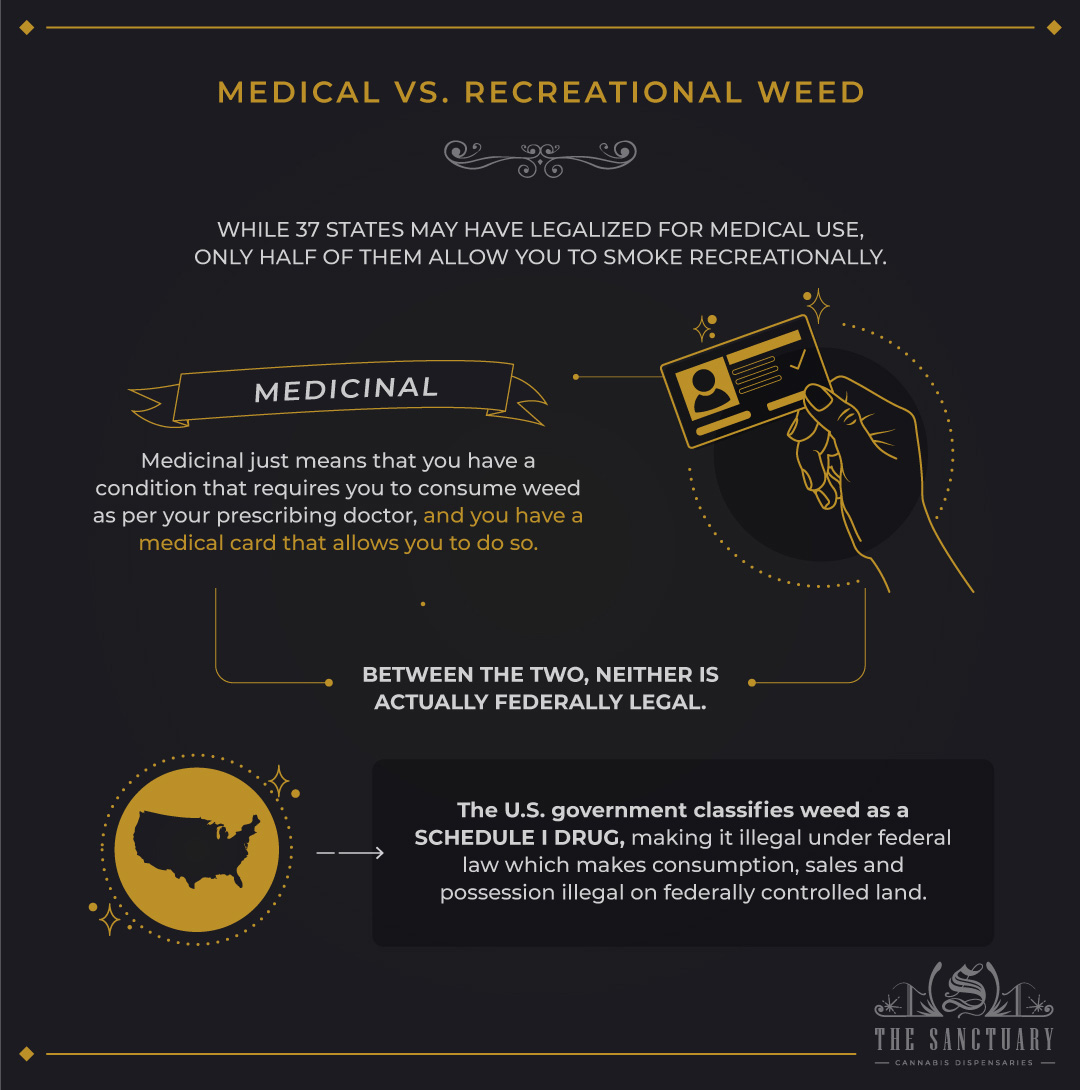 As you may have seen by the title, this list does not include states that legalize medicinal marijuana. While 37 states may have legalized for medical use, only half of them allow you to smoke recreationally.

For further clarification, medicinal just means that you have a condition that requires you to consume weed as per your prescribing doctor, and you have a medical card that allows you to do so. States that only allow this don’t usually have a lot of dispensaries. If they do, they cannot legally sell to you if you are not a qualified patient with a medical card.

Which is Federally Legal?

Between the two, neither is actually federally legal. Every individual state can vote on whether or not they can legalize weed, and that is why we have it, but the U.S. government classifies weed as a Schedule I drug, making it illegal under federal law which makes consumption, sales and possession illegal on federally controlled land.

States that have Recreational Weed

While not every legalized state allows recreational use, a total of 18 states have legalized it since 2012. The laws obviously change across state lines, but gone are the days (in these 18 states) where toking up would land you in jail.

For passionate growers, Alaska obviously allows personal use but also 6 plants in your possession, so long as no more than three are currently budding. In 2014, Alaska became the first state to legalize since 2012’s historic year.

Arizona’s 2020 Proposition brought an end to weed-related offenses, records with nothing more than these offenses were expunged and all their adults can now buy and grow. Happy day!

Weed culture and meme culture practically go hand in hand, so you have probably seen the memes aimed at California’s stoners. It comes as no surprise that Cali not only legalized personal use, but also consumption lounges.

The Golden State legalized in 2016 and you can now consume in public at designated spots, and carry up to an ounce in public.

The literal OG Kush of recreational weed in America, Colorado became one of the very first to legalize back in 2012. It is known that their laws can change across counties, but Colorado still allows their adults to hold one ounce and grow up to 6 plants at once.

For anyone over the age of 21, Connecticut legalized recreational use in July of 2021 (just in time for the 4th), and allows every resident to have a max of 5 ounces locked away at home and medical card holders to grow up to 6 plants at once.

Maine takes a bit of a step further in that you can carry up to 2.5 grams out of the house. You can also own a total of 12 weed plants, as long as no more than 6 are flowering.

But wait, there’s more! You can also have up to 5 grams of concentrates under Maine’s laws.

Like most other states, Massachusetts does not allow weed of any kind on federal or public land. But unlike other states, they allow you to have up to 10 ounces of flower, if the other 9 ounces are locked away.

Michigan has recently moved medicinal and recreational transactions to separate locations, but you can still buy up to 2.5 grams of weed and 12 plants per person (just keep them hidden).

You may not be able to partake as a tourist, but Montana will sell you medicinal marijuana regardless of your state, and any of residents who are 21 and up can buy recreationally.

If not for Nevada’s weed laws (and your amazing support), there would be no Sanctuary.

Since 2016, Nevada allows residents to have an eighth ounce of concentrates along with an ounce of flower. However, we did get approved for consumption lounges in 2021 so you could be able to ‘taste’ outside of your home later this year.

New Jersey has also recently allowed for consumption lounges, but tourists are not yet able to get in on the action. However, they do recognize current medical cards from all 50 states, so no worries if you’re traveling there with your card.

A limit of 12 cannabis plants per household is allowed under New Mexico’s HB2 legislature, while their residents can now possess 2 ounces of flower or less.

Certain weed-related offenses are now expunged under New York’s 2021 laws, residents can buy up to 24 ounces of concentrate or 3 ounces of flower, but every household can now have up to 5 pounds of flower. Don’t smoke it all at once!

In addition to allowing up to an ounce in public, Oregon allows you to grow up to four plants instead of the usual 6. However, you can legally own up to 8 ounces at one time.

For a total of 6 plants per household, Vermont residents can grow two plants at a time as long as the other four have yet to flower. Apart from that, their new legislature also allows you to possess up to an ounce of weed.

Since July 1, 2021 Virginians can have up to one ounce of weed in public as long as you don’t smoke it outside the house. Also, each house can grow a max of 4 plants at one time.

Nearly identical to Colorado, Washington legalized recreational use that exact same year and also allows adults over 21 to have up to an ounce of flower, or up to 7 grams of concentrates.

As of February of 2022, all U.S. territories except American Samoa have legalized weed for medical use. They remain the only U.S. territory where weed is completely illegal with recreational use and cultivation being outlawed as well.

However, two territories are the polar opposite in having full legalization: Guam and the Northern Mariana Islands. In November of 2014, Guam became the first territory in U.S. history to legalize medical use before the Virgin Islands decriminalized it that next month. Following medical use, legal recreational use would follow in 2018 for the Mariana Islands, leading to the Governor of Guam to legalize it in 2019 with hopes of regulating it like alcohol.

Never say never! Washington and Colorado seemed to start a trend of states legalizing personal use, so who’s to say that cycle could not continue? With upcoming elections, a rise of cannabis use and a push for legislation reform, more states could legalize over the next few years.