How Many People in the World Smoke Weed?

By The Sanctuary Editorial TeamLast updated on August 8, 2022No Comments

The number of people who smoke weed, in the United States alone, has grown exponentially over the last decade. We have seen an explosion in canna enthusiasts and a rise in appreciation for cannabis culture since 2012, when Colorado and Washington became the first US states to legalize weed for recreational use. This growth may be prevalent in the media, but how does that look statistically?

Does the growing number of people we see celebrating 4/20 every year reflect the increase of people in the world that actually smoke weed? It just might be in terms of CBD or other medicinal products but some further examination is needed to see if recreational weed has seen that same kind of growth (no pun intended).

How long have we been smoking weed?

The first recorded use of smoking weed dates back literally thousands of years, when the natives of modern-day China performed rituals that involved smoking to get high. The use of cannabis as a means of production dates back even further (we’re talking several millennia), but this is commonly known as the first use of cannabis as a drug.

As for Western civilization, the Americas have been growing hemp as a production tool since around the 1600s, but recreational use did not really gain popularity until the early 1900s, when migrating refugees of the Spanish Revolution introduced it to the U.S. as a recreational psychoactive. This revelation may have led us to one of the most infamous drug laws in history, but it nonetheless had people starting to show interest to see what all the hype was about.

How did prohibition affect that?

Prohibition, specifically the Marijuana Tax Act of 1937, obviously affected the prices, legalities and the number of casual users at the time but it still did not stop trade to the United States illegally and a very small number of non-law-abiding users getting their fix besides the new laws. Should there not have been the Tax Act, we might have seen something like today’s booming cannabis industry close to a century earlier.

How many people in the world smoke weed? 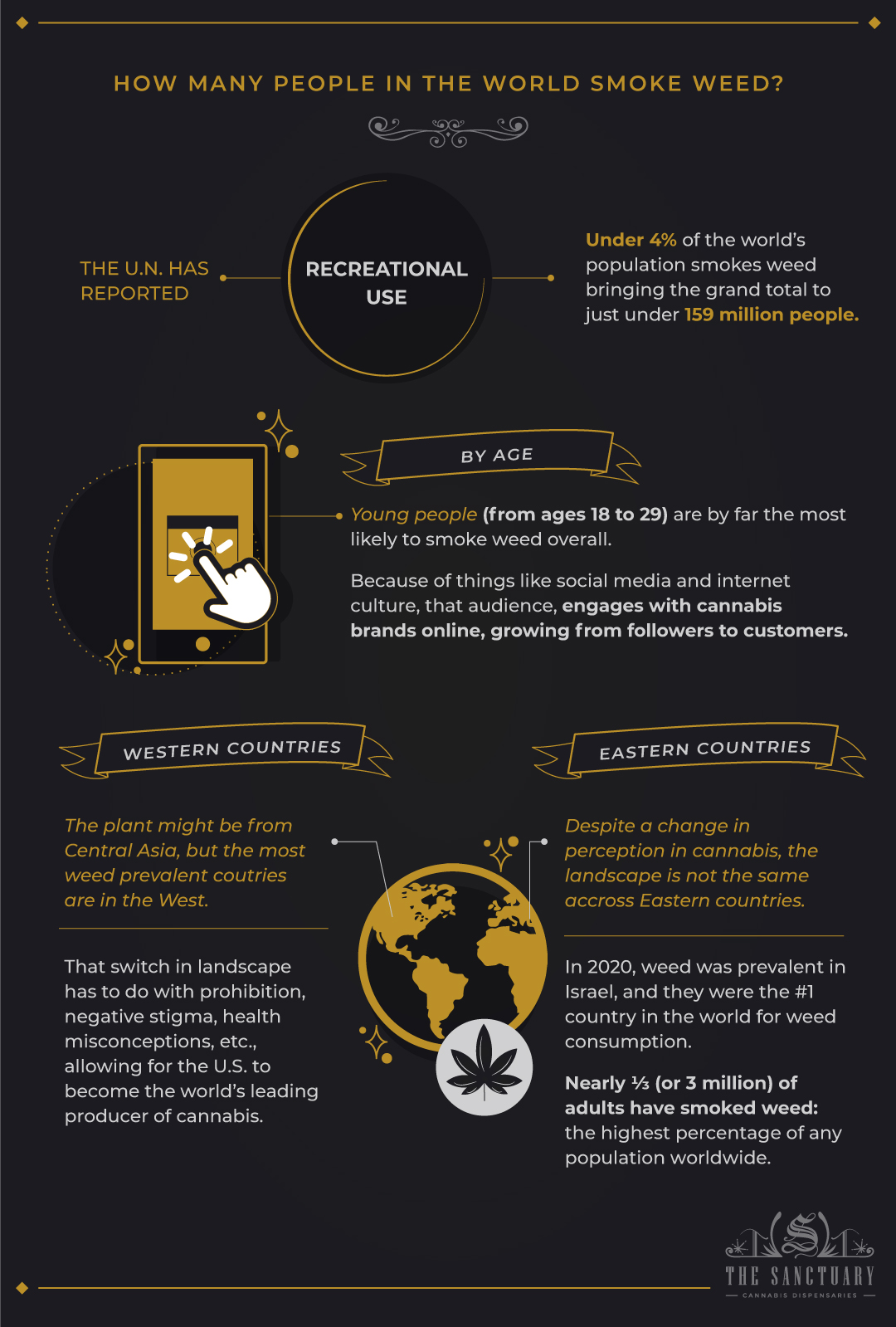 Regardless of background or frequency of use, the U.N. has reported that just under 4% of the world’s population smokes weed (for recreational use), bringing the grand total to just under 159 million people. Medicinal use is in another league entirely, but to put into perspective, the number of people that smoke recreationally makes up about half of the U.S. population. But is the prevalence of cannabis culture the same across the world and across different age groups? Let’s take a look.

Of all the people in the U.S. who said to have smoked weed since 2016, no major differences are noticeable in terms of ethnic or economic background, but you do notice a big difference by age. Young people (from ages 18 to 29) are by far the most likely to smoke weed overall. Interestingly, in states like Nevada, cannabis and alcohol are both illegal until you turn 21, but the former is marketed heavily towards young people more than alcohol.

That is not to say that alcohol isn’t marketed towards young adults, but because of things like social media and internet culture, that audience (which is primarily young) engages with cannabis brands online, growing from followers to customers.

The plant may have originated in Central Asia, but the most weed-prevalent countries in the world today are literally on the opposite side of the globe. That switch in landscape has to do with prohibition, negative stigma, health misconceptions, etc., allowing for the U.S. to become the world’s leading producer of cannabis. Neighboring countries such as Canada and Mexico also lead the world in production and do not trail too far behind the U.S.

Despite a drastic change in the perception of cannabis, it is not the same across all Eastern countries, one of which was even the world’s largest supplier at one point. What is even crazier is that in 2020, weed was not only prevalent in Israel, but they were actually the #1 country in the world for weed consumption. Nearly one third (or 3 million) of their adults have said to have smoked weed: the highest percentage of any population worldwide.

Despite the overtaking of cannabis culture in the media since the 1970s, the vast majority of people who reported to have smoked weed still do it medicinally. The most recent studies found out that of all the people in the world who smoke recreationally, 2-3 times more people had used it medicinally. This figure represents a 60% increase in consumption over the last decade.

In the U.S. alone, over 55 million adults reported to have smoked weed since 2019, making up for about 18% of the consumer population. Percentage-wise, this still fails in comparison to Israel’s 27% who smoke, but it still equates to the U.S. having ⅓ of the world’s weed smokers.

What country has the most dispensaries?

The answer may or not be what you’d expect. Or maybe it is, the United States has the most dispensaries of any country in the world with over 7,400 nationwide. Amsterdam may be renowned throughout the world for its consumption coffee houses (while Canada and Uruguay being known as two completely legal countries), but the U.S. leads in production, the number of consumers and the rise of cannabis business.

It makes sense with the U.S. being such a consumer-based economy and state laws being separate from federal laws that more states (and therefore, more people) have a bit more freedom to decide what to do with the green stuff. Not every country, even the ones that allow consumption, are fortunate enough to legalize on a province level (which would be a state level to us). Not to mention, the number of dispensaries is sure to increase now that more states are legalizing and allowing for their own consumption lounges.

Do they have the most smokers?

In the objective sense, the greatest number of smokers, the U.S. fits this bill as well. But keep in mind: Those 55 million Americans that smoke weed are still only 16% of the population, while Iceland sits at 18% of its population smoking weed and Israel at 27%. If that was the percentage of Americans that smoke weed, the number would jump to almost 89 million people!

Nevertheless, the global cannabis industry is said to be growing steadily over the next 5 years, making it very possible for these numbers to change.