The Most Expensive Weed Strains in the World

Weed has become a hot product in the United States. Every knowledgeable ganja lover and user understands that the greatest strains provide the best experience and make the cannabis consumption process worthwhile.

Generally, weed strains are priced around the same. You may notice differences in strains that usually are not more than a few dollars per gram. However, the world of cannabis has created some luxury strains that may surprise you when you read the price tag.

A luxury strain can cost 2 or 3 times as much as a regular strain, so if you want the finest money can buy, you will have to be ready to empty your wallet.

What determines the price of cannabis? 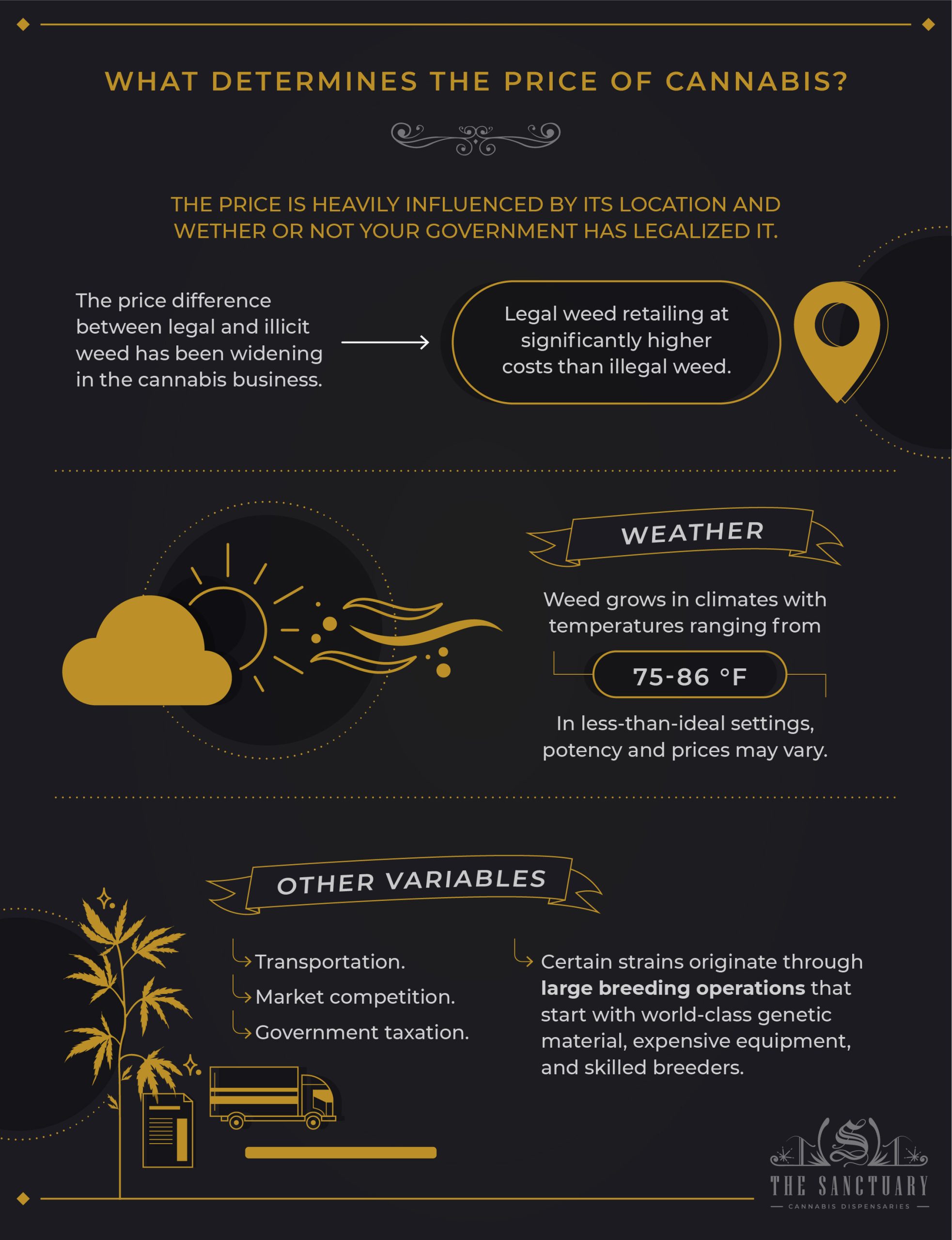 The price of cannabis, like other high-end agricultural goods, is heavily influenced by its location. It is not so much where it is grown as it is whether or not your government has legalized it. The price difference between legal and illicit weed has been widening in the cannabis business, with legal weed retailing at significantly higher costs than illegal weed.

When it comes to the price of a cannabis harvest, another important aspect is the weather. Weed grows in climates with temperatures ranging from 75 to 86 degrees Fahrenheit. In less-than-ideal settings, potency and prices may vary.

Transportation, market competition, and government taxation are all variables that influence the price of cannabis. Certain strains originate through large breeding operations that start with world-class genetic material, expensive equipment, and skilled breeders. Some cannabis strains command a far greater price on the market than others, regardless of their origins.

Do not be fooled by the name; Loud Dream will not neccesarily transport you to a dreamy condition. Although this strain is mostly indica, it has a well-balanced mix of effects that make it ideal for daytime usage.

While THC levels have not been formally measured, most reports indicate that they range from 14 percent to 16 percent. Nugs can grow to be rather big, with a thick coating of trichomes covering them. Sweet lavender and spicy earth aromas characterize the Loud Dream strain. Spices, tropical fruit, and moist soil are believed to be flavors.

In 2009, this unusual strain drew the attention of the cannabis community. Rumors began to circulate that the cultivar may be the catalyst for a significant increase in cannabis strength. From online cannabis forums to real-world events, the name kept showing up.

Oracle is said to have two unique characteristics that set the strain apart from nearly every other one on the market. The first rumor was that it has very resinous buds which contained a massive THC concentration of 45 percent.

Also, Oracle was said to have harvested in a record amount of time. Growers would no longer have to wait many months for their plants to mature. Both of these characteristics drove up the cost of these genetics, with seeds costing $200 apiece and clones costing $1000.

Unfortunately, all of the enthusiasm turned out to be completely unfounded—most likely due to a combination of deceptive marketing and overly enthusiastic cannabis users on the receiving end. The Werc Shop, a cannabis testing lab, received samples of this strain in 2013 and submitted them for a test.

Oracle not only did not have 45 percent THC, but it hardly had any at all. It turns out, Oracle had a different type of cannabinoid: CBD. It generated very high quantities of a non-psychoactive cannabinoid, with very little THC. As a result, you will not get high from this strain. You will, however, get many medical benefits from this strain.

Fruity Pebbles appeared and vanished in the blink of an eye. Alien Genetics’ limited-time offer will be remembered by many passionate growers and breeders. Green Ribbon, Granddaddy Purple, and Tahoe Alien were used by breeders to develop this tantalizingly delicious hybrid.

Such a powerful pantheon of parents resulted in a strain with enticing characteristics. Fruity Pebbles has large amounts of THC, which fueled a powerfully stoned body high that could send even the most seasoned users to the couch. Fruity Pebbles’ amazing terpene profile was also a hit with smokers. Waves of sweetness, sugar, and fruits blasted the taste senses with each hit.

This breed was never feminized by Alien Genetics, thus purchasers had to take a chance and hope for a female. With a price tag of up to $1500 per seed, this appears to be quite a risk!

After a memorable online appearance, Isla OG shot to stardom. Rapper 2 Chainz brought this bud to the spotlight after wrapping it in 24-karat gold rolling paper during a YouTube series. Whether it was a smart marketing gimmick or an illustration of Isla OG’s opulence, this event quickly associated Isla OG with a high-end image and prestige.

It costs $100 per eighth, more than 3 times the price of an equivalent amount of cannabis at a typical dispensary. This price tag gets you some unique packaging: after being cut, Isla OG allegedly goes straight into metal canisters to cure, and the canisters are then sold to the general public.

This storage solution is a grade above plastic bags or pill bottles, with the added benefit of freshness and some supply chain transparency. Although this appearance brought the strain to the public’s attention, it remains a mystery. Experts say it is descended from sativa genetics, probably a cross between OG Kush and Hawaiian.

The XJ-13 strain is a descendant of the well-known G-13 and Jack Herer, which are both quite expensive at dispensaries. It has a THC concentration of up to 22 percent and on the low end, you can find it selling for $375 per ounce.

The uplifting sativa dominant hybrid strain leaves you feeling energized and motivated. XJ-13 can be used to successfully treat mental problems as well as chronic pain and has just the right amount of indica to give you a buzz without putting you to sleep.

Meanwhile, the sativa content of XJ-13 is strong enough to give you a true taste of what a hybrid sativa can provide. XJ-13 has a strong citrus fragrance that serves to lift your spirits before the strain’s benefits even start to kick in. A fresh, summery scent greets you as you enter a room where XJ-13 buds have just been freshly ground.

White Fire OG is one of the strongest hybrids in the world, with characteristics that seem to provide the best of both worlds. With an average THC content of 30 percent, it produces a strong but energetic high.

The cost of an ounce of this strain is $600. You will notice some mental clarity at first. Then, in a way that fits the name, it will combust in your brain. You will feel energized, focused, and purposeful.

This strain has a taste of sour citrus, pepper, and soil, with diesel and herbaceous tastes on the exhale. This flavor is becoming well-known for its medicinal properties, combining an uplifting, but spicy earthiness.

The most costly cannabis available is Cannabis Caviar. It is a cannabis product rather than a specific strain. The method of production is what makes caviar so renowned.

High-quality buds are soaked in powerful hash oil to make cannabis caviar. After the oil has soaked into the buds, the outcome is an extremely concentrated product.